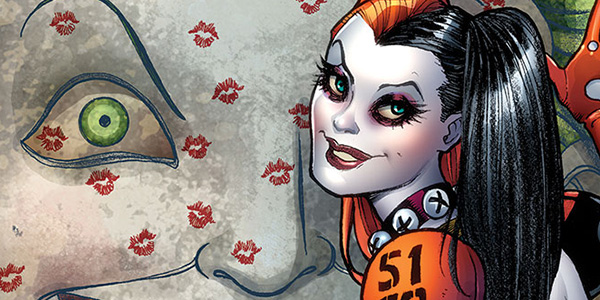 Harley Quinn is getting her first solo title in 10 years, co-written by fan-favorite artist Amanda Conner and prolific creator Jimmy Palmiotti. Harley has been stealing fan’s hearts since her debut in Batman: The Animated Series, and there has been a lot of talk around the new book. At Baltimore Comic Con, Amanda and Jimmy took a break from being the most popular comics couple on the floor to talk with us about what’s it’s like writing a book together and the world they’re building for Harley, as well as some creator-owned projects on Kickstarter. 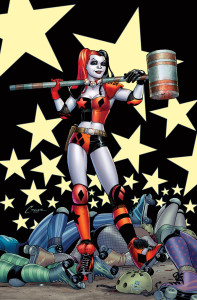 Alison Baker: What’s it like writing and plotting out the story together, for Harley Quinn?

Amanda Conner: It’s fun. I have to say, as of right now, Jimmy is coming up with all the good ideas. But, it’s a lot of fun. We’re starting to get a feel for her voice and everything like that, so that’s the important thing. Getting a feel for actually how crazy she’s going to be, and what her voice is going to be, that’s the big stretch. Once you have that down, it almost writes itself.

AB: Jimmy, you seem to really like writing with a partner. Is there a particular reason?

Jimmy Palmiotti: I’m lonely. (laughs) It’s fun to collaborate because it makes your brain think a different way. Whenever I have my own stuff, it’s me — it’s all in my own head. I see the path going forward. When you write with somebody else they challenge you, they say ‘but what about this, what about that.’ I find that it makes you more creative. With Justin [Gray] it’s been going great, and we’ll see how it goes with this one.

JP: It’s fun to work with somebody else, it gets you out of your own head. With Amanda, it’s gonna be interesting, because she’s a detail person and I’m a big picture person, so I have the big ideas for what to do with Harley, and by the time they get to her she’ll be dissecting every panel. 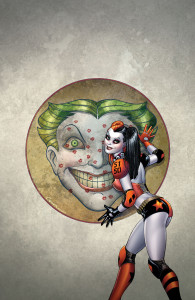 AC: I’m going to drive him nuts, thinking about all of the little things that would make sense or not make sense in a scene.

AB: A lot of people are talking about this book and about Harley herself, but I’m curious as to what kind of supporting cast Harley is going to have?

AC: I don’t know that we can talk about it too much, but some old friends will be showing up.

AC: There are going to be a lot of new friends for sure.

JP: In the building she moves into, the downstairs is run by a freak show. Is there a better word for it?

AC: No, it’s a freak show. Coney Island has one.

AC: No, we aren’t using that particular one. But it does exist. 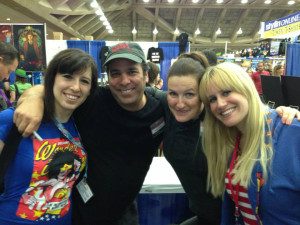 JP: I think we’re going to call it something like ‘Big Tony’s Freak-a-Rama’; we’re still working on a name. Definitely Big Tony, though, since he’s the little person who runs things.

AB: So there will be wacky neighbors, that sort of thing?

AB: I love that roller derby look on Harley Quinn on the cover of Previews for September.

AB: There’s even an episode of Batman: The Animated Series where she gets out of Arkham for a day, and she goes around town with her hyenas on leashes, pulling her on roller skates.

JP: Is there? There you go! That’s exactly how we picture Harley.

AB: I also want to say congratulations on the Weapon of God Kickstarter doing so well. 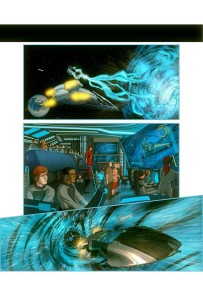 AB: Would you like to talk about your new Kickstarter, Forager?

JP: It’s an all-ages graphic novel, a sci-fi story about a couple having relationship problems and decide to take a vacation in outer space. It’s in the future, obviously. They have an 11 or 12 year old daughter with them. This young girl has first contact with an alien race. Then we cut to 15 years later, where she’s going to take that first contact to an actual physical contact. It’s very sci-fi, it’s very Justin. Very Justin, moreso than most. He brought it to me, and I messed with some stuff. We hope to raise enough money to pay our guys and put stuff out, and that people enjoy it.

AB: Thank you guys so much for taking the time to talk to us!

JP: Thanks for hanging out!