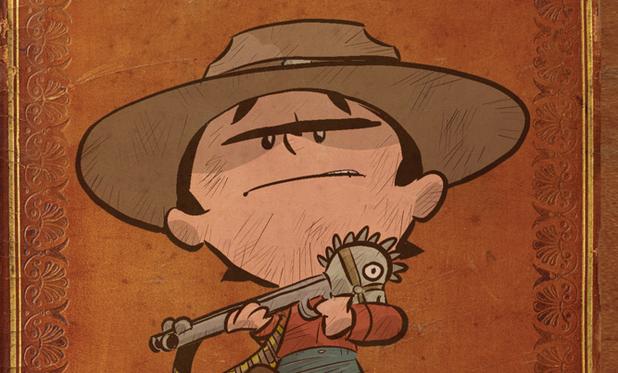 In two days, be prepared to be amazed. Cow Boy, the original graphic novel by Nate Cosby and Chris Eliopoulos hits shops this Wednesday, unleashing a young bounty hunter on the Wild West. Nate and Chris took time from their schedules to answer some questions about where this book came from, what it is like to write an ‘all-ages’ title, and where you can get a sneak peek at the book for free!

Aaron Long: Can you discuss how Cow Boy came to be? How long has the title been in development? 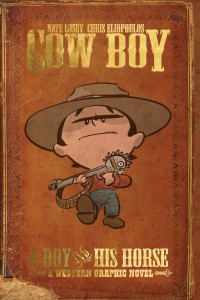 Nate Cosby: Chris and I wanted to work together in some way after I’d left Marvel while back…I was really keen on doing a Western, it’s one of my favorite genres. And when I thought of Chris as the artist, it just clicked in my head that he draws great kids in a fun cartoony way. So I wrote the first chapter, gave it to Chris, and he liked it enough to start drawing. It took about a year to finish the book, since both Chris and I have other projects we were working on at the time.

Chris Eliopoulos: We both have the same sensibilities when it comes to all-ages books and Nate asked me what I wanted to draw. I told him lawn gnomes. Then a month later Gnomeo and Juliet came out. I was heartbroken. Then Nate suggested Cow Boy. I was a little nervous at first. I’ve never drawn a western at all. But, I figured I could draw an issue and it would go nowhere. My surprise. It was good and I had fun drawing it, so we kept going.

AL: Nate: is it difficult to write a true ‘all-ages’ title? Keeping the story engaging for children and adults can’t be easy…

NC: I don’t consider it any harder than writing for just adults or just kids. I believe All-Ages stories should have an innate sophistication that’ll keep older readers entertained, but not include overly violent/sexual situations inappropriate for younger readers. I subscribe to the idea that All-Ages doesn’t mean just for kids…kids aren’t dumb, they just haven’t learned certain things yet. All-Ages entertainment can both thrill and educate, and appeal to the largest possible demographic: Everyone.

AL: Chris: what were some of your inspirations for the character designs?

CE: Really I just pictured Boyd as this unkempt kid. Messy hair, a bit dirty. Without a family to watch over him, he was a little messy. I tried to give him an oversized hat and dark hair. I did some sketches, then sent them to Nate and he said I nailed him and off I went. Nate’s really good about letting me go off and try things without forcing me to draw how HE wants it.

AL: Boyd has an unwavering sense of justice and right and wrong, which can seemingly get him in trouble sometimes. Where did he gain such a strong moral center? 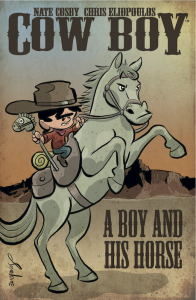 NC: Boyd’s morality was tempered by being raised by and around outlaws. He’s been tortured by evil kin his entire life. So by the age of ten, he got fed up with their evil ways and decided he’d give as good as he got. But it’s a tricky decision Boyd’s made…because he’s only ten. He’s had no life experience, so the more he’s out in the real world, searching for his relatives, the more he’s going understand how the world works. His morality and will are tested, and will be until he’s done with his mission.

AL: The book deals with some of the more unsavory facets of the Wild West – corruption, racism, theft – was it a difficult choice to address these themes? Did you decide early on to include both the good and the bad of the time?

NC: Never occurred to me to shy from hard facts of the genre or era. Boyd’s a bounty hunter after bad people…we have to show the bad, and show that life wouldn’t be easy for a ten-year-old to travel hundreds of miles on a horse with a stick-horse shotgun. As for racism…hey, it was there. I grew up in Mississippi, where there are still pockets of racism and bigotry, though it’s progressed a lot in the past decade. It fascinated me how people could hate other people just because of their skin color. A lot of what Boyd’s opinions on racism are an extension of what I saw growing up.

AL: The short stories by the guest creators are great – how did your guests become involved with the project?

NC: We figured it’d be fun to cut up the main chapters with cool short stories, give the audience a little something extra for their money. We were SO lucky that such talented creators said yes to us, and came up with SUCH awesome tales. Roger Langridge, Colleen Coover, Mike Maihack, Brian Clevinger, Scott Wegener, Mitch Gerads…you really can’t ask for a better team of contributors than that.

CE: Plus Nate knows everyone and all he had to do was ask and people jumped at the chance to do a western-themed short story.

AL: Last words are to you, Nate and Chris: any last comments on Cow Boy to Comicosity readers?

NC: Go on to cowboycomic.net and check out the story for yourself. I think it’s gonna surprise you. Chris and I wanted to make a fun book, but there’s a depth of characterization and subject matter that we think’ll appeal to adults and kids alike.

CE: Forget what you think this is going in. You’ll be shocked and surprised. Nate has written a wonderful tale that while being fun and interesting, he’s touched on themes that make you think. People will be moved by this book.