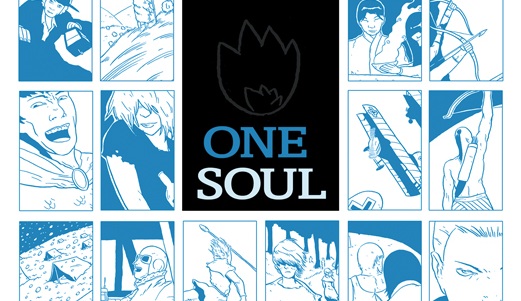 Buckle up, readers, Ray Fawkes is going to take your mind on a philosophical journey…Fawkes is the writer and illustrator of One Soul, a truly unique creation that has been nominated for an Eisner award this year at SDCC. Fawkes recently took some time to discuss his visionary work, where he was when he ‘got the call’ and what readers can expect next from him.

Aaron Long: First off, congratulations on the Eisner nomination! Do you remember where you were when you found out? 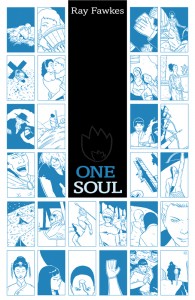 Ray Fawkes: Thank you! Of course I remember – I was setting up my table one morning at this year’s Emerald City Comic-con and my editor, James Lucas Jones, came by to give me the good news. Obviously, it made my day – I recall laying the books out on the table with a big smile on my face.

AL: One Soul is an amazingly unique piece of work. Can you discuss how this project came to be? Had you been developing the concept for a long time prior to it being completed?

RF: I had, yes. ONE SOUL is, in many ways, the story I’d been building up to tell for years. Its real beginning came of some noodling in my notebooks, when I was thinking of the unique strengths of comics, particularly in manipulating overlapping storylines and playing with the perception of time. I conceived of a “three dimensional” story – one where the readable axes would not only lie flat on the page, but also shoot through them, creating more than one passage through time within the narrative. Each individual story thread that I could put on the page would share a certain time frame, because of their appearance of simultaneity by sharing space in that flat axis, but would also depict a distinct passage through time as the pages were turned. Not only did the idea appeal to me as something that pushes the limits of comic book storytelling to date, but also as a technique that would be nearly impossible to achieve in any other medium.

After I figured out how to make something like that work, it was a matter of finding the right story to apply it to. I’d been planning to do something that covers the philosophical subject matter you see in ONE SOUL for a while, and that particular idea seemed a perfect fit. 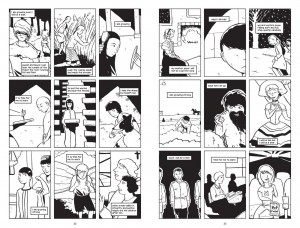 AL: Can you discuss your creative process for One Soul? As writer and artist, did you find the script changed at all while you were creating the art?

RF: Very much so. Then again, I’m what Kurt Vonnegut refers to as a “Swooper” in his definition of the two types of writers in Timequake – I tend to write a piece in one fast drive, and then go over it again and again, shaping and reshaping the text until I’m satisfied. The process of drawing the book just added an opportunity to think carefully about each panel as I was putting it on paper – I was reworking the text constantly in my head as I drew the pages.

AL: As I read the book I could tell your choice for the 9 characters in One Soul was with great precision. Can you discuss why you chose some of the specific time frames and geographic locations for the characters?

RF: Well, without giving too much away, I can just say that there are certain subjects that I needed to cover from several angles to help generate the feeling of universality that I was looking for in creating the book : I don’t want ONE SOUL to be about one person’s life, or eighteen lives – I want it to truly be about everyone’s life. Each character was chosen to provide a perspective that helped cover those angles. For instance, in dealing with the question of war, I felt I needed to include at least one character who was an unwilling soldier, one who was an enthusiastic one, one who was a casualty, one who was an unfortunate bystander, and one who was tasked with caring for the injured. That’s war. I also wanted to cover questions of faith, love, death, birth, duty, freedom, and fortune.

AL: Any final words for Comicosity’s readers regarding One Soul or any other projects you are currently working on?

RF: I’m do want to say thank you to everyone who’s read ONE SOUL, and that I’m enormously pleased and inspired by the response it’s generated. I hope that readers will be happy to know that I have more experimental and philosophical pieces in the works. I’m currently writing and illustrating a graphic novel called THE SPECTRAL ENGINE for McLelland & Stewart, which will see release in 2013, and I’ve already begun the notes for a conceptual follow-up to ONE SOUL, which I plan to undertake in earnest as soon as that book is done.