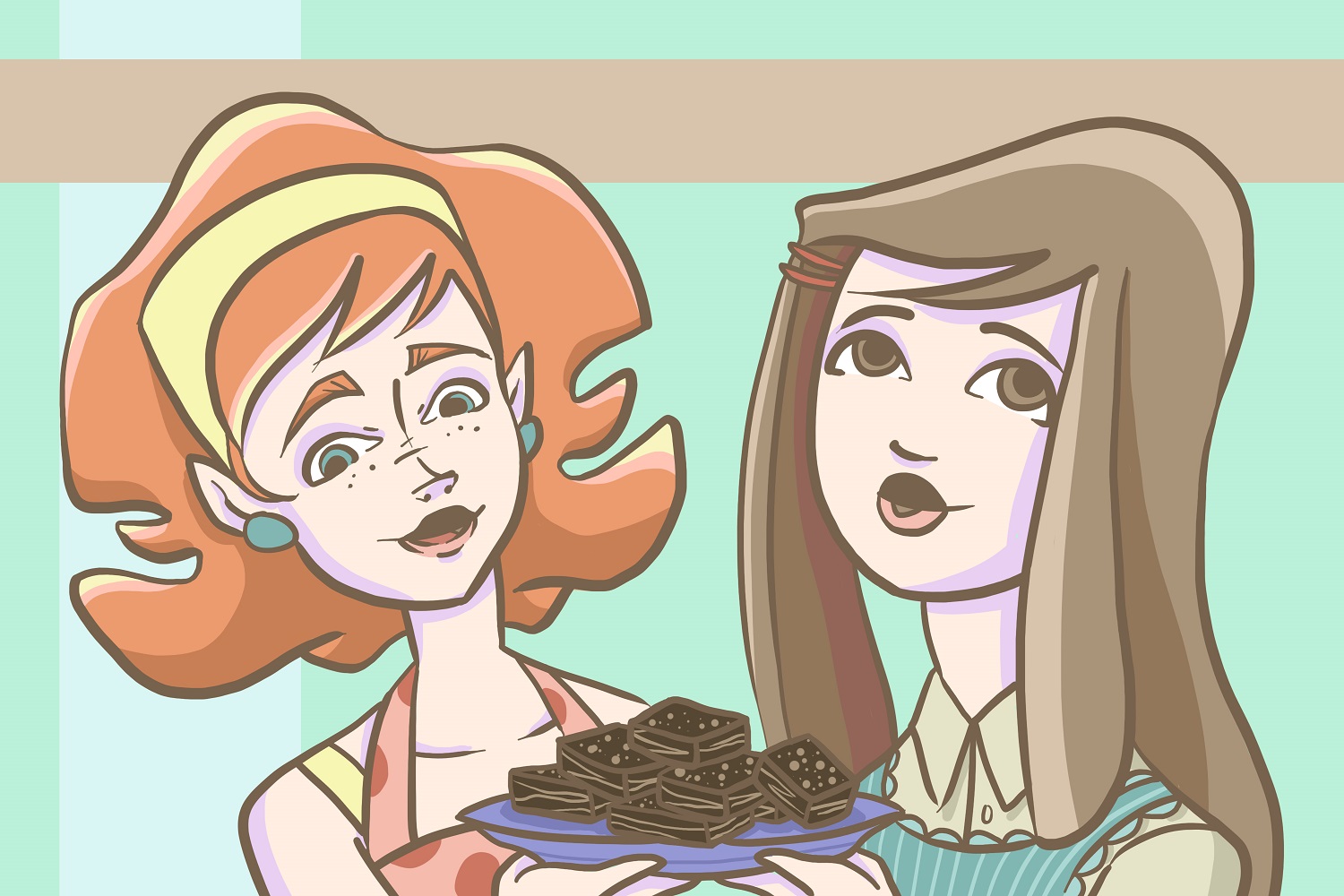 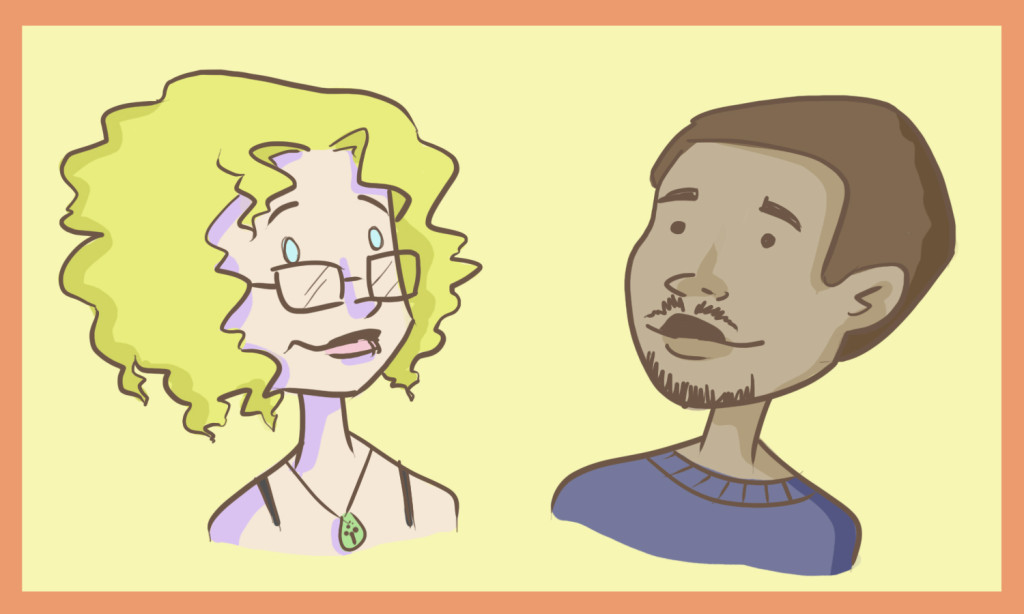 Jackie Croft’s rendering of herself along with co-creator James Wright in the style of NUTMEG.

What’s cooking in the kitchen turns into a criminal empire for two girls in junior high. The girls bond over a prank on a pompous rival then find themselves “building a criminal empire with their irresistible brownies.”  The latest information about this  all-age book being served up with a triple dose of J-names as I, Jessica Boyd, got a chance to talk to illustrator Jackie Croft and writer James Wright of the new Action Lab book, Nutmeg, available March 25, 2015.

Jessica Boyd: How did the story of two suburban pre-teen girls becoming criminal masterminds come about?

James Wright: If I remember correctly I was thinking to myself, back in fall 2011, “What if the Girl Scouts were a criminal organization?” Around the same time, I had the non-sequiter title of Nutmeg bouncing around in my head, which at the time was for a story about an out-of-work detective. These led me to the realization that the teen detectives of Nancy Drew and Encyclopedia Brown and Veronica Mars didn’t really have arch-nemeses, they didn’t have a Professor Moriarty to their Sherlock Holmes. And from there I wondered about a story told from the nemesis’s position, going up against an analogous Girl Scout troop, and using whatever means at their disposal to bring them down. As I got more into this idea, I was struck by how few stories we see about female criminals, particularly female criminal partnerships–one of my favorite movies is Peter Jackson’s incredible, heartbreaking Heavenly Creatures–and I knew I had a way to tell this story. 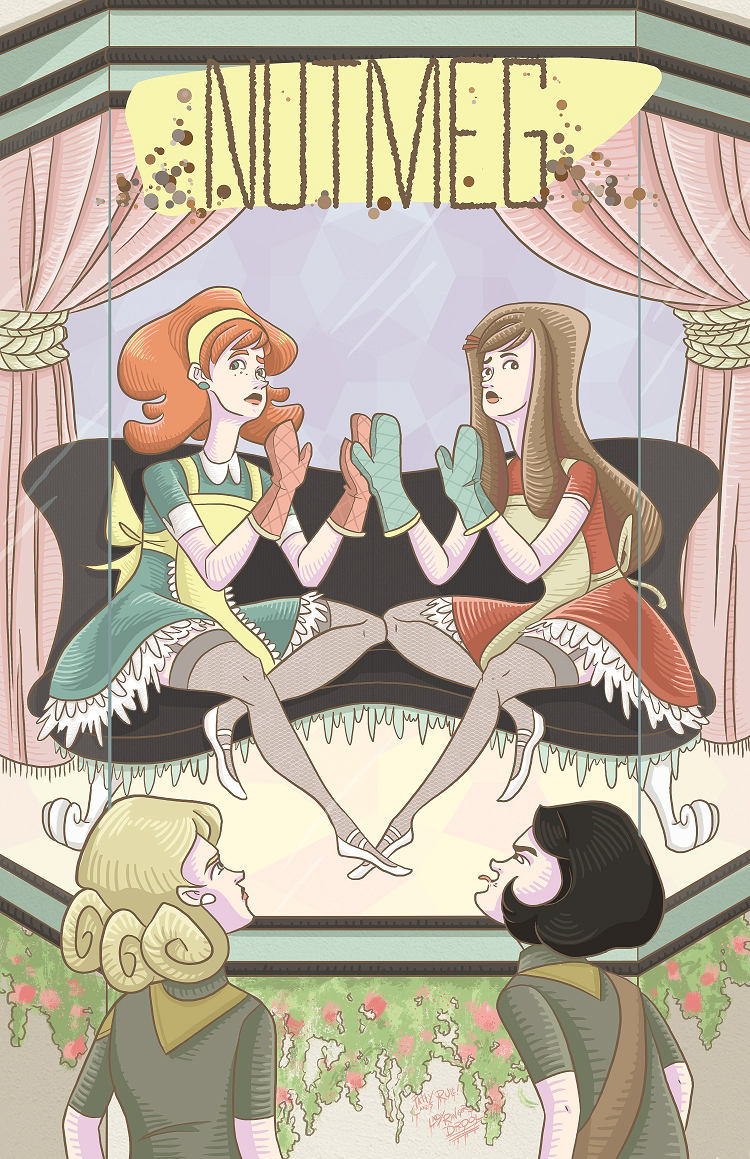 Jackie Crofts: The story and concept were James’ and he came to me to do the art for it. I met James through a friend (and other awesomely talented comic artist) named Josh Eckert in college who met James online. He came from LA to visit Josh in Indianapolis and meet the art gang. After that he was like, “Hey I’ve got this idea and I think your style would be great for it!” and we started not shortly after. James’ enthusiasm and passion for the idea got me really excited about it, and I could already tell from his visit that we clicked in the way of collaboration. It’s pretty lucky that we met at all and were able to get the opportunity to work on Nutmeg.

Jessica: There is an all ages feeling to this book, however you do have junior high students who stumble into a life of crime. Who is your target audience?

James: Ideally the target audience is 11 or 12 and up. Despite the all-ages look to it, there are some darker elements that emerge later–nothing graphic or sexual, mind you–that might not work for younger audiences. While the first issue is very tame and only hints at the things to come, I’ve actually tried to avoid using “all-ages” as a descriptor when possible because I know what’s coming. That said, I may be being overly cautious, since kids read at varying levels. One of the other reasons for that target audience is that some of the things the girls in the story experience–typical coming-of-age touchstones–might only be familiar to those at that age or older. I should also point out that I actively sought Jackie after speaking to our mutual friend Josh Eckert (who also provided the variant cover for issue #1), because her “softer” art style was the perfect juxtaposition to the criminal elements of the story.

Jackie: I definitely second James on this one. I think his writing is great enough that anyone can enjoy the book, but he’s also made it so it’s appealing for younger female audiences. Every time I read the next issue I’m laughing to myself and surprised at the turns and ways the story goes and how the characters grow and I can imagine different things about it appealing to different groups of people.

Jessica: Do you see a trend of more adults wanting to read books that they can not only read themselves but share with their children?

James: I do think that is something we’re seeing more of, especially because that’s the best way to foster a love of reading in children is by sharing. If parents happen upon our book and like it enough and feel it’s appropriate enough to want to share with their kids, we would absolutely love that. Although in addition to that I do feel that it’s equally important for younger readers to have the opportunity to gravitate toward books that speak to them on their own. My dad read Superman comics to my brother and me when were little, and while we didn’t become Superman fans, he also took us to comic shops and we were able to find our own books to enjoy. So, I think sharing is a stepping stone to developing independent readers.

Jackie: I think this is huge right now because not only do the veterans of being into comics want to have something to read to their kids or grandkids, the generations where comics have exploded into widely accepted pop culture are starting to have kids too. They want to pass on what they love and be able to introduce their kids to an environment and culture that accepts all kinds of people and also represents those people as well. Comics are a great medium for that.

Jessica: How does the setting drive the story? Is there an active push to make social commentary on how they live? Or does it just fall more in line with that “Mean Girls,” or Disney HD type of vibe?

James: Honestly, it’s definitely more of the latter. There wasn’t a conscious consideration of social commentary in regards to the story or setting at the outset for me. I mostly wanted to tell a story in a way I hadn’t seen done before, or often. Of course, along the way I began to see how on the surface it’s about teen girl criminals, but the more time I spent with these characters the more I saw it’s also about the dissolution and rebuilding of friendships, some of which never fully recover. It’s something nearly every junior high or high school student has experienced (or will experience). The crime element just expedites the process. 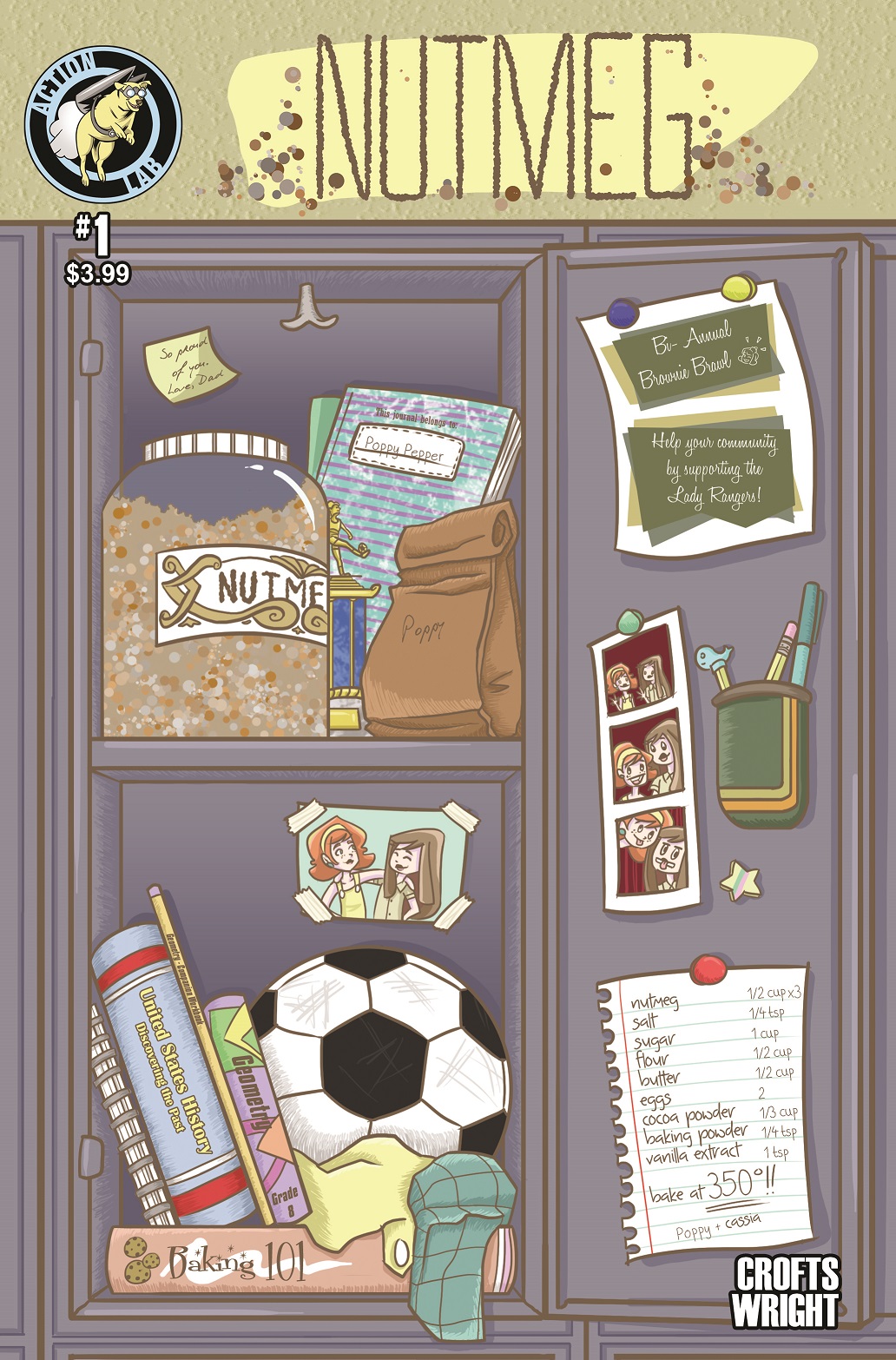 Jackie: I think James probably has a better feel for this question, but I do love the collaboration aspects of creating the settings regardless of what he intends to write about them. Bringing his descriptions to life is always a lot of fun. I trust that he will be coming up with really clever ways of tying it all together through characters and setting.

Jessica: All the characters have spice and cooking related names. Does each name correlate to their character’s personality?

James: Yes and no. Poppy was originally a tomboy character, and though that trait took a backseat, the name has always sounded to me like someone friendly and open. Cassia is a somewhat uncommon spice, and at the outset the character has an air of mystery she brings to the Vista Vale community. And Saffron, the chief antagonist, named for one of the most expensive spices in the world, was perfectly suited for the snooty rich girl. The others–Marjorie, Anise, Ginger–were less intentional, if only because they originally intended as major cast members.

Jackie: James is the potentate of puns.

Jessica: How did the primary design of the cast come about?

James: This is Jackie’s purview, so I’ll just say that I sent her the character names and personality descriptions, and what she came back with exceeded my wildest expectations. Seeing that, I knew that she knew these characters as well as I did.

Jackie: I feel like James and I are usually just on the same wavelength. I don’t usually have to say, “What do you mean by this description?” or “I’m not really understanding what this character is like”. Maybe it’s just because he’s so fantastic at describing and writing about the characters that it made it easy on my part to imagine them, but it was just a feel that I had when going to create them that I usually knew how they would be. We also have a lot of common interests and inspirations for the book and when you have great inspiration and can leverage that in the correct way you can give characters a real sense of depth and personality. I wanted everyone to just seem like every day people you could meet, or maybe remind you of someone you know or grew up around.

(You can find out more about each character and their designs by clicking here.)

Jessica: The website nutmegcomic.com shows a variety of characters, but only a few play a part in the first issue. What can you tease readers with about what is to come?

James: One point I’ve stressed to myself as we’ve worked on this book is that while Poppy and Cassia are the main characters, they’re not the heroes. I think that’s an important distinction to keep in mind as this story runs its course. And that no one emerges from it unscathed or unchanged, some for the better and some for the worse.

Jackie: I’m so excited for the full cast of characters to have their time in the spotlight. There are dynamics between groups of characters that I think will surprise readers. Two of my favorites don’t show up in the first issue (though you can find them hiding in some background shots if you go back later when you know them!).

You can add Nutmeg to your local comic shop pull list using Diamond Code: JAN150927. You can also find out more from their website at nutmegcomic.com.