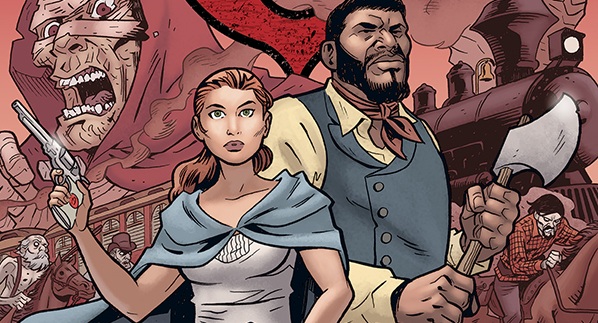 The Oni Press Eisner interview series concludes today with writer Cullen Bunn, co-creator of the fabulous western-adventure The Sixth Gun. The title focuses on six guns, each with a mystical power and a sinister purpose and their owners, whose are bound to the guns until they perish. Bunn recently took time out of his schedule to discuss the title, how he found out he’d been nominated for an Eisner, and where you can find him at SDCC.

Aaron Long: First off, huge congratulations for your Eisner nomination for The Sixth Gun! Do you remember where you were when you found out about the nomination? 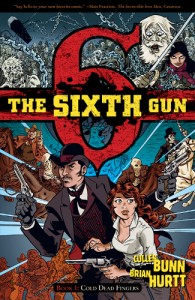 Cullen Bunn: Thank you! It’s a real honor to be nominated.

I was actually at the swimming pool with my wife and son when my editor, Charlie Chu, called me with the news of the nomination. I think it stunned me for a few minutes. My wife thought I’d just received some terrible news for a few seconds until my head stopped spinning and I told her what was going on. Then we went out and had a celebratory dinner.

AL: Will you be attending SDCC and the Eisner ceremony? If so, where can people find you?

CB: I’m definitely attending SDCC and the Eisner ceremony. I’ll be doing a few signings and panels throughout the convention, but folks can definitely find me (along with my Sixth Gun co-creator, Brian Hurtt) at the Oni Press booth on Thursday, Friday, and Saturday from 3:00 to 4:45.

AL: One of the best parts of The Sixth Gun is your strong and diverse cast. Is there any character that you find easier to get into the mind of than the rest? 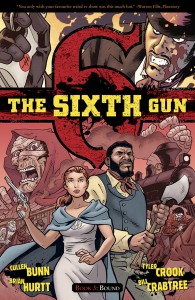 AL: At this moment, 23 issues of The Sixth Gun have been released. Of those issues, which has been your favourite script to write?

CB: The cop-out answer would be that my favorite script is always the one I’m currently working on. But I won’t go that far. I will say it’s difficult to pick just one issue that I enjoyed writing the most. There are bits and pieces of every script that I really liked. The first issue stands out as a favorite, since I was just beginning to see the world taking shape. Issue 9, with the vicious animal attack, was fun because I just knew I was gonna be torturing Brian with that sequence. Issue 16, with Becky’s interaction with her stepfather. Issue 17, with Gord’s family. I also really enjoyed the Asher Cobb origin in issue 14 because it was such a change of pace.

If you wanna talk about least favorites… the train attack in issues 12 and 13 was a bear to write.

AL: Any final words for The Sixth Gun fans about where the series will go next, and what readers can look forward to?

CB: I just finished the script to issue 27, so we’re past the halfway point in the series. From here on out, we start a rollercoaster ride to the end. There are a lot of shocking revelations on the horizon. I don’t think the series will end in a way that anyone expects. And I’ll say this… no one is safe.