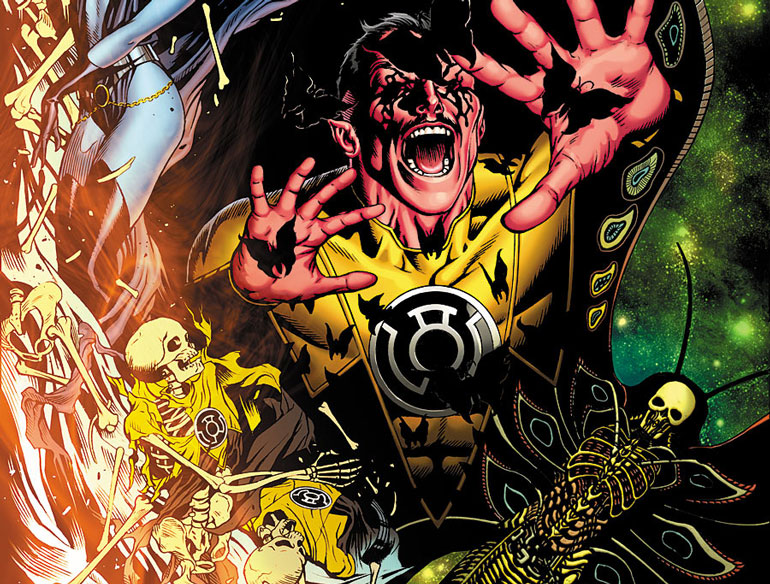 Where there is light, there also must be darkness, and no character epitomizes that truism like Sinestro, the leader of the Yellow Lanterns. As Cullen Bunn continues to write the ongoing adventures of Green Lantern’s most complicated foe, the writer sat down again to share a little bit about Sinestro’s relationship with his Corps and with his daughter, and just what we can expect in the months to come!

Matt Santori: Cullen, thanks so much for setting aside time to talk about our favorite Yellow Lantern! Now that Sinestro has regained a bit of his footing with the Corps, does he see these Lanterns as any more than a means to an end? Has he ever?

Cullen Bunn: Sinestro sees the Corps as a useful tool, but he’s always been willing to cast them aside when it suited his needs. As far as he’s concerned, he knows they’ll always come back to him, like a whipped hound, when he needs them. That said, it troubles him that the Yellow Lanterns have fallen so far from his guiding principles. Under Arkillo’s recent leadership, hundreds of new Yellow Lanterns have joined the Corps, and many of them are “unfit” in Sinestro’s eyes. So, this time around, the Corps is a little more difficult to control, and Sinestro is starting a process to clean the impure from his midst.

MSG: Sinestro is actually taking on a great deal of responsibility for his own people in the aftermath of their near complete genocide. In your mind, is he motivated by the same feelings as he was when he took control of the planet originally, or has his perspective shifted at all?

CB: Those feelings he had when he became the tyrant of Korugar are still there, but this time around he is trying to keep that in check. His primary motivation—at least for now—is that his people suffered under his rule and because of him. This, though, is his chance to set things right. He wants his people to thrive… but he also wants them to respect and love him and recognize him as their savior. He’s a little less iron-fisted (again, for now) than he might have been in the past, but he’s determined to protect the Korugarians in whatever way he deems necessary.

MSG: Soranik Natu is definitely a fascinating addition to the cast to play constant prosecutor to her father’s defense. What was your thought process behind making her play such a high profile role in the series?

CB: I felt that a team of bad guys like the Sinestro Corps needed a conscience—someone to be the voice of reason. As much as I like villains, a team of them might have been a little overwhelming without someone to at least try to keep them in check. Originally, that role was to be filled by a new character. My editor suggested that I look at Soranik as an addition to the cast. I hadn’t considered her to start with because I wasn’t sure having a Green Lantern on a team of Yellow Lanterns would fly, but her skills, personality, and relationship with Sinestro bring a really interesting dynamic to the book.

MSG: A fairly related question: in establishing this relationship, is there as much likelihood that Soranik will move toward the “dark side” of Sinestro’s path as there is that Sinestro will be redeemed for the good? It almost could be like a Return of the Jedi scenario…

CB: Yes, I see these two as being engaged in a constant struggle, even if neither of them would be willing to admit it. Soranik has the potential to sway Sinestro’s point of view, but Sinestro could also influence Soranik. You’ll see a glimpse of how this might play out in the upcoming Futures End issue.

MSG: Lyssa Drak’s future sight is a curious development for the character, but certainly something useful from a plotting perspective. What kinds of challenges does that conceit hold for you in a storytelling sense and how do you manage its use so it doesn’t become a deus ex machina of sorts?

CB: Dealing with prophetic visions can be tricky business, and I have some experience working with the device from my time writing The Sixth Gun. It’s important that these visions have a limit. If Lyssa knows everything, then she can avoid any potential obstacle. With Lyssa’s gifts, there are a few limiting factors. She cannot see every future event. Her gifts are tied to the Book of Parallax, and to some degree her visions are drawing from all the stories that were scribed therein. She gets random flashes of times ahead. It’s not a steady stream of visions.

There’s another possibility to consider.

Maybe Lyssa does see EVERYTHING.

And maybe she is simply picking and choosing what to tell Sinestro in order to serve her own agenda.

But I wouldn’t do that, would I?

MSG: How has the collaboration with regular series artist Dale Eaglesham been working, and what do you think he’s bringing to the character of Sinestro that’s all his own?

CB: Working with Dale has been great. As a fan of his work, I was thrilled to have him on board the series. Dale is definitely a world-builder. In his designs, you can see that there is a bigger story. There’s history. And that’s something I very much wanted to see in this book. The way he has drawn some of these locales and characters fuels my imagination. There are some minor characters he designed so amazingly that I want to write entire issues just about them!

MSG: We see at the end of issue #3 that the Sinestro Corps is about to face off against the Paling. What is it about Sinestro’s group that attracts their attention, above all the other Lanterns?

CB: The Paling could have gone after any of the Lanterns. It just so happens that Sinestro was the first Lantern that started raining on their parade. Now, Lyssa believes that the power of fear is the only thing that can stop the Paling. Whether or not that proves to be true, we’ll have to see.

MSG: Any final thoughts or special teases for the next few issues of Sinestro you can share with the Comicosity audience?

CB: In the next issue of Sinestro, you’ll see the Corps go up against just three of the Paling’s enforcers, and it will be a pretty sobering fight. The effects of the battle will stay with them for some time to come, and it might turn the Sinestro Corps’ greatest weapon against them.

Sinestro will also be meeting up with Hal Jordan, and the encounter will not go well for one of the two.

And everyone is asking me about Parallax. I’ll reveal a little more about the fear entity in issue #5.

Cullen Bunn scribes the ongoing adventures of Sinestro for DC Comics, but also can be found behind the desk writing Magneto for Marvel Comics.