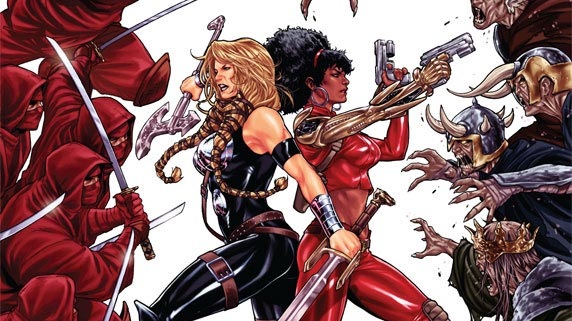 Valkyrie. Misty Knight. Dani Moonstar. All on one team. The Marvel Universe has been without Shieldmaidens for too long, and the time has come for Valkyrie to assemble her team. Cullen Bunn, writer of Fear Itself: The Fearless, will guide her through this process and all it entails in Fearless Defenders. The all-female cast will start to come together this February in the first issue of the dynamic new series and Bunn was kind enough to take time from his schedule to discuss these women and what makes this team the Fearless Defenders.

Aaron Long: Fearless Defenders looks to be a very unique take on a team book, how did you get associated with the project? 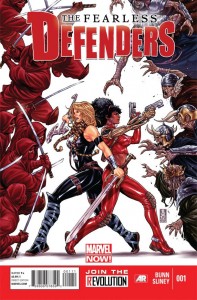 Cullen Bunn: This is actually the first series I’ve been involved in from the very beginning, meaning I pitched this concept as a series some time ago. The idea for the series came to me while I was working on Fear Itself: The Fearless. I ended that series with the Shieldmaidens of Asgard vanishing into the multiverse. Brunhilde, the last of the Valkyrie, was tasked with rebuilding the ranks of the Shieldmaidens. Since Asgardia is located on Earth now, she was asked to choose her sisters from the women of Midgard. This means that all the heroes of the Marvel Universe are possible new recruits.

AL: You were the writer of The Fearless which starred Valkyrie. Will Fearless Defenders be picking up where that series left off?

CB: Fearless Defenders certainly spins out of the events of Fear Itself: The Fearless. Some time has passed, though, since the end of the previous series, and Valkyrie has yet to choose a single Shieldmaiden. I always wanted this series to follow Val’s quest to select the “perfect” team, and I thought it might be interesting if she’s simply found the task too challenging. Even though she’s fought side by side with many of the women of the Marvel Universe, she cannot find anyone she thinks of as worthy of the mantle of Shieldmaiden. So… faced with a job she can’t accomplish, she does what many people would do. She procrastinates.

The sequence Will Sliney draws of Val’s procrastination is one of my favorites in the book!

AL: Valkyrie, Misty Knight and Dani Moonstar are the nexus of the group, and a very diverse trio to have working together. Can you discuss the situation that brings this team together?

CB: The absence of the Shieldmaidens provides a small window of opportunity for “something very bad” to awaken. Because Val has taken too long to choose her team, a villainous woman is able to use some ancient Asgardian magic to awaken the Doom Maidens, who are very bad news. Misty and Valkyrie are drawn together by an ancient warning. Dani, on the other hand, finds herself in hot water with the aforementioned villain because of her connection to both Asgard and Hel. 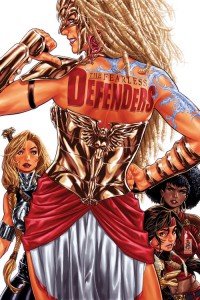 AL: The Fearless Defenders will be comprised of 9 different team members. Is it difficult to juggle that kind of a cast, and will the members be “permanent” for lack of a better term or will the core trio be static with 6 members that are involved less frequently?

CB: In the end, Valkyrie will choose eight other women to fight by her side. They will be permanent members of the group, but I will take my time in bringing them into the book. I think it could be challenging to juggle that many characters in a single story. Therefore, you’ll see a bit of a rotating cast. One arc might feature three or four members of the team. The next arc might feature a different couple of characters. Every arc will most likely feature at least a couple of guest stars. In fact, the first arc will feature a ton of guest stars. Since the series has been announced, I’ve received dozens of requests for characters to appear in the series. I believe if there is a female character in the Marvel Universe that you really love, there’s a good chance she will be featured in this series at some point.

AL: It was recently announced that Hippolyta, or Warrior Woman, will be a part of this series. What does she bring to the dynamic of a team that is already so diverse?

CB: Hippolyta is by far the most physically powerful member of the team. She’s also the most bold and overconfident. She’s only recently been returned from the dead, and she’s going to make the most of this new lease on life. She’s going to savor every moment of her second chance. Hippolyta is queen of the Amazons, and she enjoys a challenge. We’ll soon see that she has a number of tasks that have been set before her, and she’ll have to complete all of them before she can get to some of the things that mean a great deal to her, such as restoring the Amazons to their former glory.