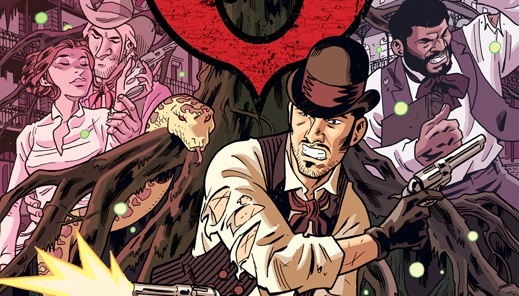 The Sixth Gun has taken readers to a lot of places in its first 23 issues, and now Cullen Bunn is forcing Becky and Drake into an inhospitable realm and harsh, cold winter. Winter Wolves is the next arc of the hit series and Bunn recently gave Comicosity some insight as to what readers can expect from the next arc of The Sixth Gun. 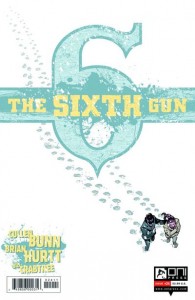 Aaron Long: The next arc of The Sixth Gun, Winter Wolves, kicks off with issue #24. Can you provide a high level look at what the next arc will bring for Becky, Drake and The Guns?

Cullen Bunn: Winter Wolves brings another clash with the spirit world. As we hinted in the “Crossroads” story arc, the creatures that dwell on “the other side” kinda have it in for Drake… and anyone else connected with the guns. Last time, Marionette of the Dry Arms struck at them while they were in New Orleans. This time, they are attacked in the wilderness by a much more powerful, more cunning creature–a creature as old and strong as the very concept of winter. The creature’s motivations, though, are much different than Marionette’s, and its strategy is much more cruel. Drake and Becky are thrown into a hopeless situation, and as their desperation (not to mention Becky’s distrust of Drake) grows, their enemy only becomes more powerful.

This arc will also feature the return of some fan favorite characters. Kirby Hale, Gord Cantrell, and others play an important role in the story. Readers might even be treated to a little Billjohn O’Henry… and I’m talking about alive-and-kicking Billjohn!

AL: Each arc of The Sixth Gun builds heavily upon the previous arc, with storylines weaving their way through each issue. You’ve no doubt planned well into the future for this book, do you currently have an ending planned? Have you had a set duration for this title from the beginning?

CB: There is a definite ending in mind for the series. It took shape at some point during the scripting of the first story arc, so elements from those early issues have a part to play in the endgame. The major arcs are all planned out (with a little wiggle room if we need it) and the series is planned for roughly 50 issues. 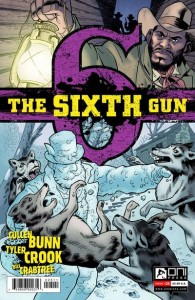 AL: I have to ask about the “silent” issue, #21. When did you decide you wanted to do a silent issue, and was your creative process different for that book? How do you go about writing a comic with no dialogue whatsoever?

CB: What you really want to know is if I took that month off, right? Actually, I don’t think the process was drastically different from other issues. Obviously, I didn’t have to write dialogue, but there were instances where I made sure to explain to Brian what the characters were supposed to be saying to each other in the panels. I still scripted the entire issue panel-by-panel. At some point before I started on it, Brian and I sat down and he asked if I would script it in such a way that it would be easy for him to add a couple of extra panels to every page if he wanted. That was the most significant change in the process.

As for when we decided to do the silent issue, it was a decision we made early on. We knew we wanted to have a silent issue. We knew (roughly) what would happen in the issue. We just didn’t know where that issue would fall in the series. The fact that it occurred in issue 21 (the same number as the infamous silent issue in G.I. Joe was actually a happy coincidence!

AL: I’ve been wondering about this one since I first read what each of The Guns could do: if you had to wield one, which would it be?

CB: That’s a tough one. The easy answer would be the Sixth Gun, because it is so vastly powerful. It has powers we haven’t revealed yet (although a new ability will surface during the Winter Wolves story). I’m not sure, though. Maybe I wouldn’t want to know too much about what the future holds.

AL: Any final words for Comicosity’s readers regarding The Sixth Gun?

CB: Magic guns with the power to reshape all of reality. A strong female gunslinger. More than a couple mysterious outlaws. Ghosts. Undead. Black magic. If you’re not reading this book yet, why not? The first issue is still absolutely free on ComiXology and on the Oni Press website. You can dive right in and see if you like it.