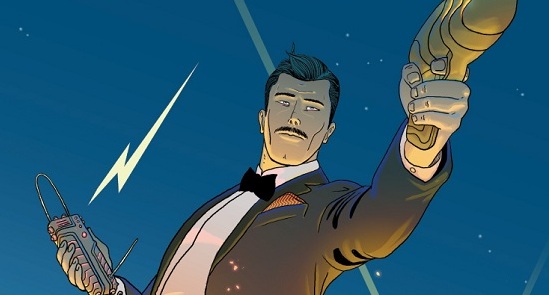 Leon Theremin, renowned scientist of the early 20th century, has some secrets…and Curt Pires knows them. The LP scribe has teamed with Dalton Rose (Sacrifice) for Theremin, a digital release through Monkeybrain Comics.

Aaron Long: Let’s start at the beginning. How did Theremin come to be? How did the title end up at Monkeybrain? 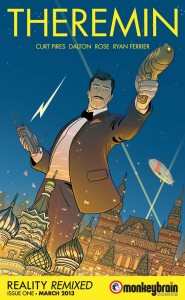 Curt Pires: Dalton and I had worked up a pitch to show to potential publishers, and we sent it over to Chris and Allison over at Monkeybrain. They dug it, and we ran from there. Chris and Allison are amazing to work with.

AL: I’ll be honest, prior to this comic book I had never heard of Leon Theremin. What inspired you to write a story about the Russian inventor?

CP: I was inspired by how crazy the events that encompassed his life were, and the possibility’s I saw to fill in the gaps. There is very much information missing from the life narrative of Leon Theremin , I guess I saw an opportunity to sort of merge fiction and reality inside of these gaps, and write about laser guns.

AL: In the comic Theremin’s trademark musical device has some traits that aren’t exactly in the history books. Can you discuss what the device can do in the world you’ve built, and what Theremin’s role is in the series?

CP: In the world of our comic, the THEREMIN device has several functionalities. The big one, the one you’re alluding to in your question is that if a certain , very specific frequency is struck on the device, it opens a gateway sideways in time , to a sort of alternate reality , where one can jump into whatever moment in time they desire. SPACETIME travel.

In the series THEREMIN is many things. A scientist, a superspy, and everything in between.

AL: Dalton Rose is a rising star in the world of comic art. How did he get involved with the project?

CP: I met him last year at ECCC. We decided we wanted to work together shortly after. We sacrificed a mountain goat, a lion and a small child to the comic gods and they made it happen.

AL: If you had to boil Theremin down to six words, what would they be?

Theremin can be pre-ordered here: http://www.comixology.com/Theramin-1/digital-comic/DIG003502