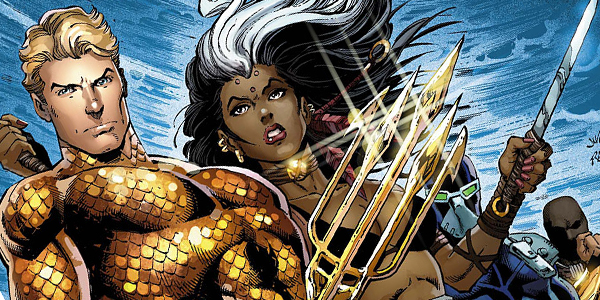 Everything is coming up Aquaman these days, as the King of Atlantis helms not one, but TWO ongoing series. With yesterday’s launch of Aquaman and the Others #1, fans of the New 52 are treated to more of this mysterious group introduced in volume 2 of Aquaman’s ongoing story. Charting the course is writer Dan Jurgens — no stranger to Aquaman, having written his ongoing series once before — who took time out of his busy schedule to talk about the characters the Sea King has now surrounded himself with, what we can expect in the series, and how the process on the upcoming  New 52: Futures End is going, as well! 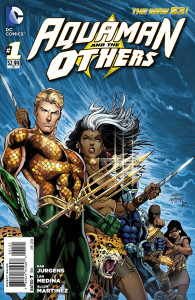 Matt Santori: Thanks for talking with Comicosity again, Dan, and congrats on the new series! This is the first time Aquaman has had two ongoing series at the same time. What are your thoughts on the Sea King’s newfound popularity and longevity on the comic book page?

Dan Jurgens: I think it’s great. I’ve always had a fond spot for Aquaman and he’s certainly been one of the more successful reconstructions to come out of the New 52.

MSG: The Others have a classically pulp feel to them in their original design, with elements of James Bond, Tarzan, and Native American legend mixed together. How do you approach writing characters (including Aquaman) with this kind of feel differently than you would the traditional American super-hero?

DJ: It all comes down to a couple of things.

For the most part, they don’t have traditional super powers so it then becomes a question of how do they get the job done? What motivates them? Why do they do what they do and why do they stay together? 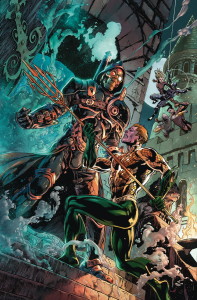 They all have some fairly well defined jobs or missions that exist outside the realm of the group. Their very differences make them more fun to write and read about.

MSG: As detailed in issue #1, the artifacts each member of the Others wields have their origins in ancient Atlantis, and may now only work for Aquaman himself. Is the bond among the group strong enough to necessitate staying together even if the artifacts become worthless? What are your thoughts on what they mean to each other?

DJ: The artifacts mean different things to different members of the group, and we’re going to explore that over the course of the first year.

For example, the Prisoner-of War exists in a bit of chaos with the memories of his comrades infiltrating his mind as though they were his own. His spot in the group and Atlantean Manacles provide some sense of stability and personality he can call his own. 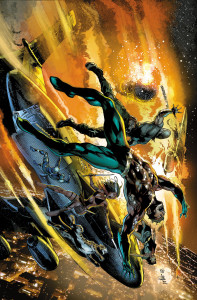 MSG: So much of Sky’s story, like Arthur’s is rooted in her ancestry and the connection to the past, yet she seems to have a much closer connection to her roots. What are your thoughts on this difference between how the two relate to their legacies?

DJ: I think Arthur’s ancestry and legacy are really quite new to him, whereas Sky has grown up with hers. Arthur is still trying to come to grips with his Atlantean past. Sky has embraced and welcomed hers.

MSG: What has working with artist Lan Medina been like, and what do you think he brings to the series that’s unique?

DJ: When we were looking at artists, I wanted to find someone who could differentiate the faces, one from another, and also convey emotion well. In a group book, those things are important.

As I looked at his samples it occurred to me that he’d probably draw a really great Ya’Wara, which he certainly has. All his characters feel real, and that’s essential.

MSG: Hinted at toward the end of issue #1 is a potential new member of the “team”: Sayeh, the sister of Kahina the Seer. What inspired you to bring her into the story, and do you think there are things Kahina and Vostok brought to the dynamic of the group that are still missing? 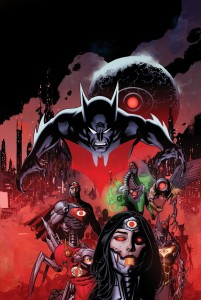 DJ: Geoff Johns and Ivan Reis did incredible work in creating the Others. In just a handful of issues, they really mapped them out as individuals. So, yeah, their deaths created a bit of a void within the group that is quite noticeable. After all, right before he died, Vostok called Arthur his brother and we found out that he, more than anyone, desperately needed the group.

MSG: An ever bigger tease at the end of your first issue is, of course, the allusion to the upcoming events in New 52: Futures End. Will Aquaman and the Others be playing a significant role in that story five years later, and how has the experience of working on that weekly as co-writer been so far?

DJ: The experience of writing Futures End has been great. Working with Jeff Lemire, Brian Azzarello and Keith Giffen is a tantalizing mix as we all come from different places in terms of our approach to comics and what we tend to like. Yet it has really come together as a unified story. We’re setting up some major developments and surprises for the DCU as all of this unfolds.

Of course, Futures End takes place five years from now. With a character who can see aspects of the future, how could these series not connect?

DJ: This is a special cast of characters who create a very nice mix when they’re together. We have some surprises coming up here as well– surprises I think the fans will really enjoy.

Dan Jurgens’ first issue of Aquaman and the Others is in stores now, but also get ready for New 52: Futures End #0, the start of a brand new weekly series co-written by Dan Jurgens and distributed exclusively from DC Comics through Free Comic Book Day events on Saturday, May 3!