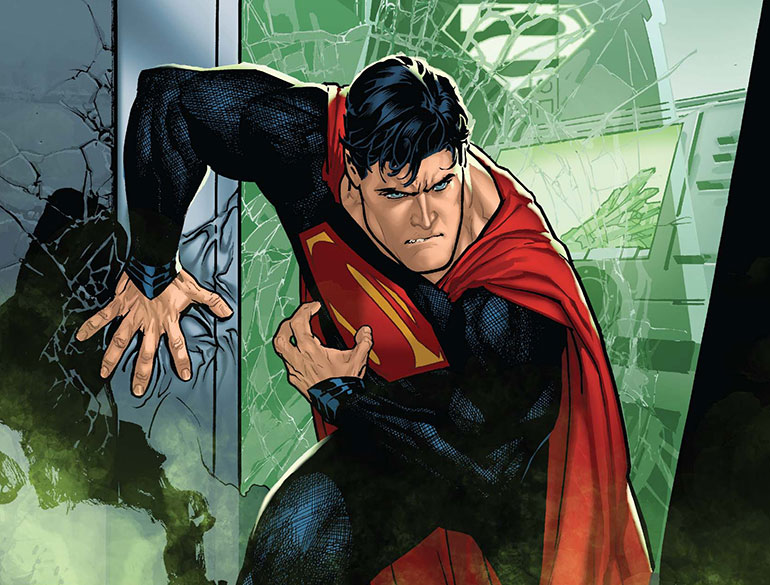 No character has experienced more change in the wake of DC Comics’ Rebirth than Superman — and he’s no longer alone! With Clark, Lois, and their son Jon taking center stage in a new era of storytelling, it’s time to up the ante on the threats. What bigger threat is there to Superman than the creature that killed him, Doomsday?

So, having the guy who pitted Doomsday against Superman — this Superman! — write his new ongoing adventures just makes sense. Writer Dan Jurgens stops by to chat with Comicosity about Jon’s role in the new series, why Doomsday is the perfect villian, and what it means to put the ACTION back in Action Comics! 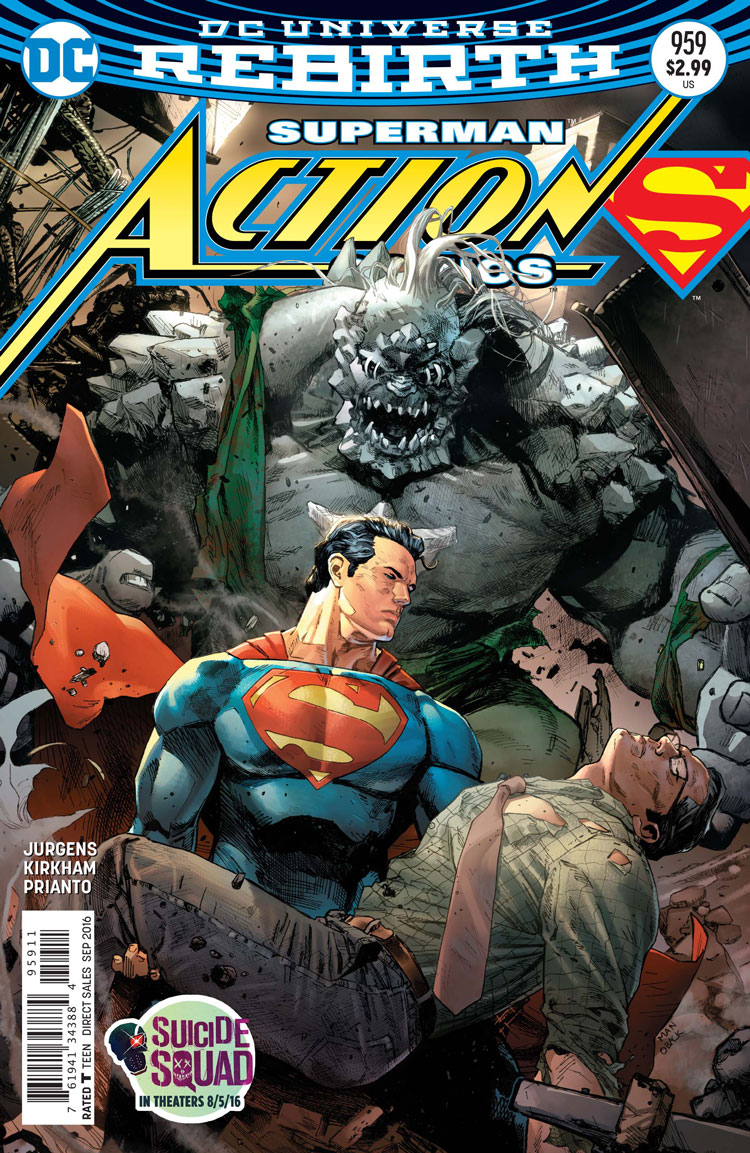 Keith Callbeck: Restoring Action Comics and Detective Comics were a big part of the messaging for Rebirth. How did you approach returning to the big series and starting at #957?

Dan Jurgens: It happened in stages. Stage 1 was dealing with the idea of having it called Action Comics. For me, that implied a certain kind of action-packed story was needed for the launch. It’s weird, because when I first heard of that, I thought, “We should pick up the old numbering system.” Before I had a chance to even suggest it, the decision was made to do exactly that.

So, once that was in place, which I was thrilled with, I knew I wanted a story that would emphasize the title and the incredible legacy it carries.

Am I proud to be working on the book and character that became the cornerstone for our entire industry?

KC: Action Comics isn’t the first time you have worked on a book shipping more than monthly, between New 52: Futures End and many Superman crossovers of years back. Is there a different pace to the storytelling?

DJ: You’re right… I’ve done this type of thing before. I worked on Action when it was a weekly, did New 52: Futures End, which also was, did Zero Hour which was weekly, and a couple of other things along those lines.

But the thing I learned most with the Superman books, which kind of followed a weekly format, is that the frequency of publication gives a writer room to do things they otherwise might not. There’s more room to detour to other characters, which I think is a key part of a book’s success. I’m always amazed at how many readers latch on to characters other than the main one or two.

A twice-monthly publishing schedule gives us that luxury. It’s fun for me as a writer and, I hope, fun for readers as well. 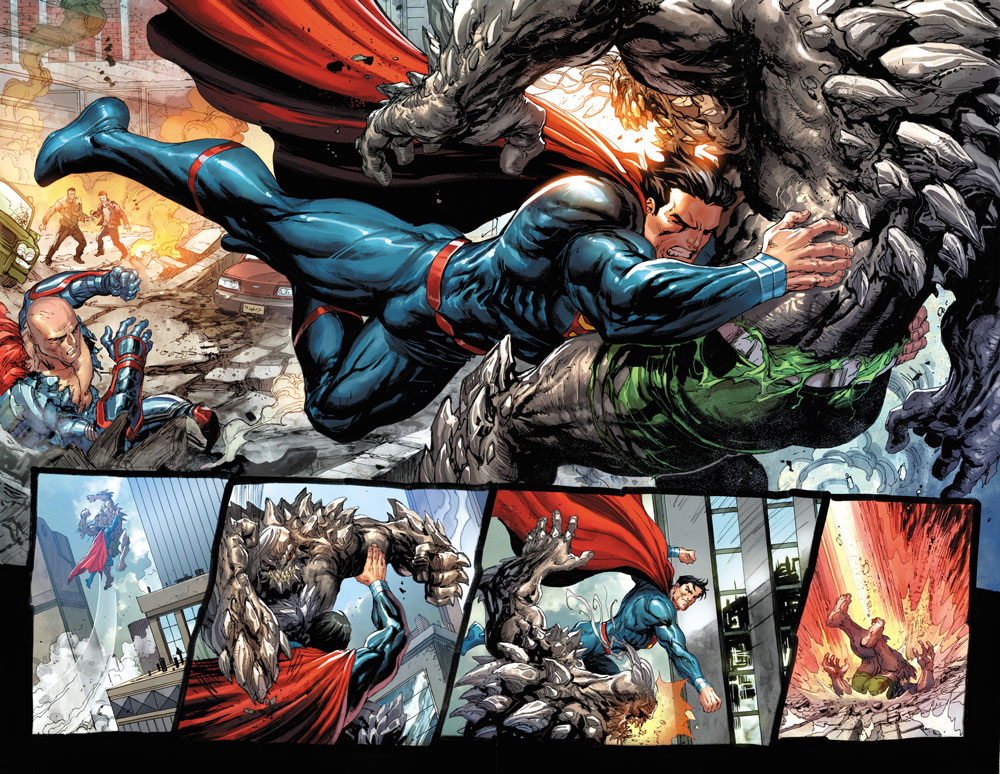 KC: You have great collaborators on the art side of Action Comics in Patrick Zircher, Tyler Kirkham, and Stephen Segovia. How does the team keep everything flowing so something like Jon’s shoes at the end of #958 are the same as page one of #959?

DJ: There’s a certain trick to that, of course, and it all starts with the editorial group. It means everyone needs to look at pages closely, at least twice, in order to make sure the consistency is there. We need to make sure we’re sending pages and updates to the entire crew of artists.

Seriously, you’d be amazed at how much time went into keeping Clark Kent’s shirt and other developments consistent across the six issues of the first arc.

KC: Lois and Clark’s son Jon is the latest addition to the Superman Family. How do you get the character to the point that he’s established enough to start appearing in books by other creators?

DJ: I think the work Lee Weeks and I did on Superman: Lois & Clark really set the stage for Jon to step forward, just as it did for his parents.

When Dan DiDio first asked me if I wanted to do that book (like I’d say no?), I talked of the need to introduce Jon in his own right — and begin to introduce the struggle of an emerging set of powers set against the problem of having no real idea that his parents had this incredible background. 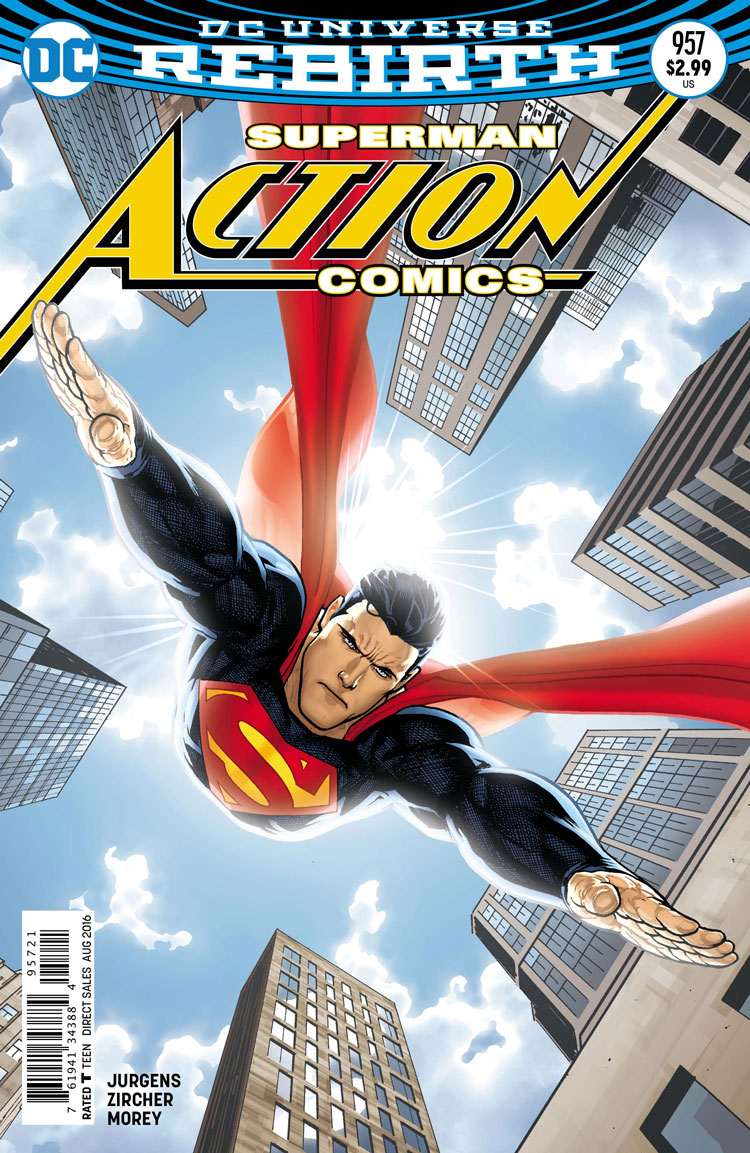 I thought readers would latch on to that and that turned out to be correct. And, right from day one, the idea was always to end the series with Jon’s first “flight”, in which he’d slowly float up into the air.

Which Lee drew incredibly well, by the way. Wonderful stuff.

KC: How far back did you know Jon would be the new Superboy?

DJ: Pretty much from before I even started writing issue one. I knew Lois and Clark would move forward to take center stage in the DCU and even then, we talked of the idea that Jon could become Superboy. 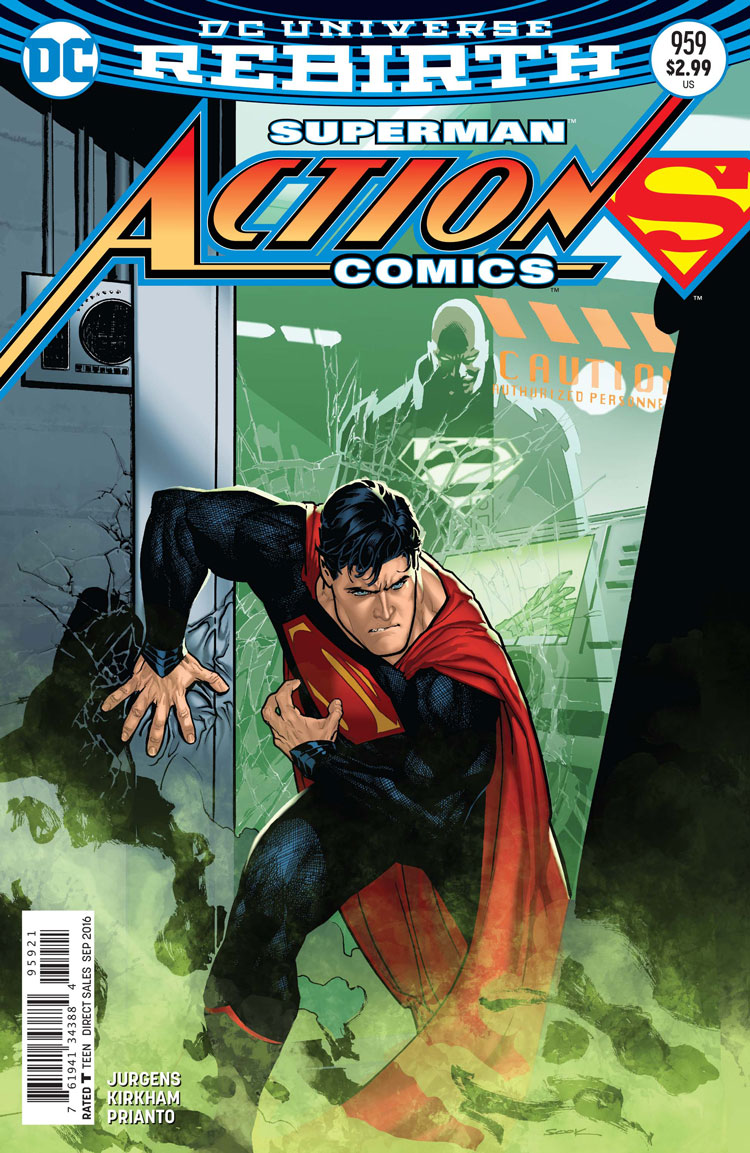 KC: Superman met this world’s Hank Henshaw in Lois & Clark and now has to work with a very different Lex Luthor. How does he handle his expectations?

DJ: Superman’s expectations are formed by his experiences on his own world.

Clearly, things are different here. Henshaw is not Cyborg Superman. Lex Luthor is in the Justice League. So these are things he struggles with, most notably because he will never be able to accept those things—at least not 100% accept them.

Remember, he saw Luthor elected president on his world. That’s an even bigger lurch than seeing him join the Justice League.

KC: It was an interesting choice to kick off Action with a Doomsday story. Why Doomsday as his first foe?

DJ: Without giving away too much of what we have coming up, there are a couple of reasons.

First, when used correctly, Doomsday has great value. Especially in this case, because we can draw a direct comparison to Superman’s earlier fight with Doomsday. As you’ve seen, this is obviously an early version of the character… the one that killed Superman.

Secondly, Superman will have to approach this battle differently. Before, he was fighting on behalf of Metropolis. This time, he’s also fighting to go home to Lois and Jon.

That changes everything. Especially when…

Wait. I can’t mention that yet. 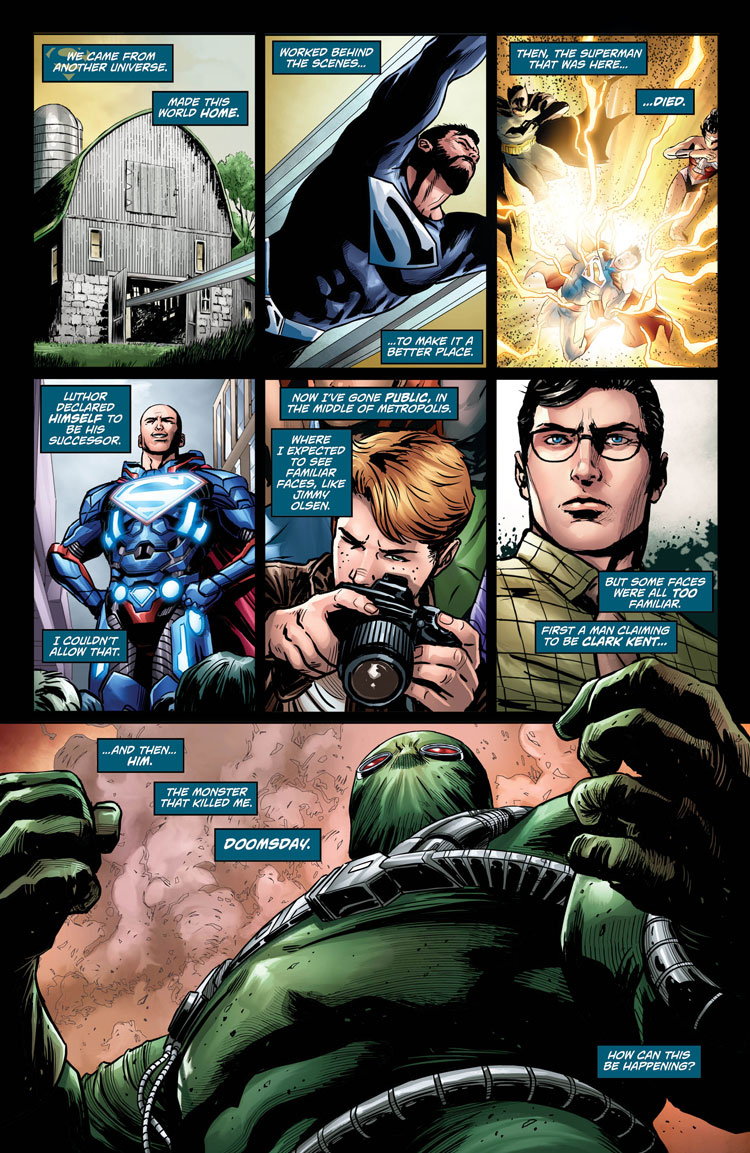 KC: There are also two great mysteries introduced in these first issues: the hooded figure watching Superman, and the even more surprising Clark Kent. When will Superman meet these members of the cast?

DJ: By now, you’ve seen that Superman and Clark have “met” in #958. Or, more accurately, been on stage together. That will play out more over the next couple of issues.

As for the mysterious hooded figure?

KC: Any final thoughts or special teases for the Comicosity audience?

DJ: We have a lot of great stuff coming up.

If you start to consider Doomsday’s motivation, who he tends to go after, the various types of things he gets involved with, well… you might be able to see that this story can detour into a much more personal one for Superman. More so than we’ve ever seen before.