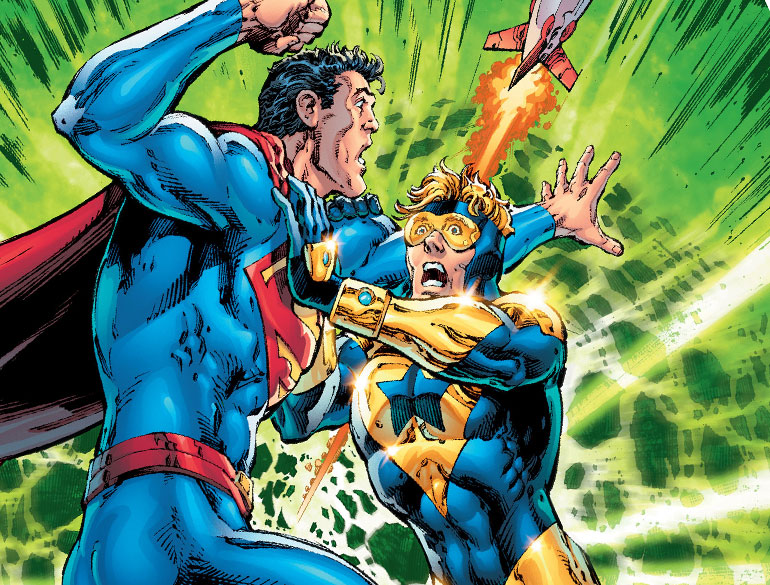 In the lead-up to Action Comics #1000, there’s a lot to get excited about — not the least of which is the return of Booster Gold in this week’s issue #993. But that’s not all DC has up their sleeve, as writer Dan Jurgens returns to the drawing board for a couple issues to match up one of his most famous creations with the Man of Steel. Jurgens sat down with THE biggest Booster Gold fan in creation to find out what he has planned for the team-up, how Booster got his duds back, and what we should start watching out for as Action hits its biggest milestone yet. 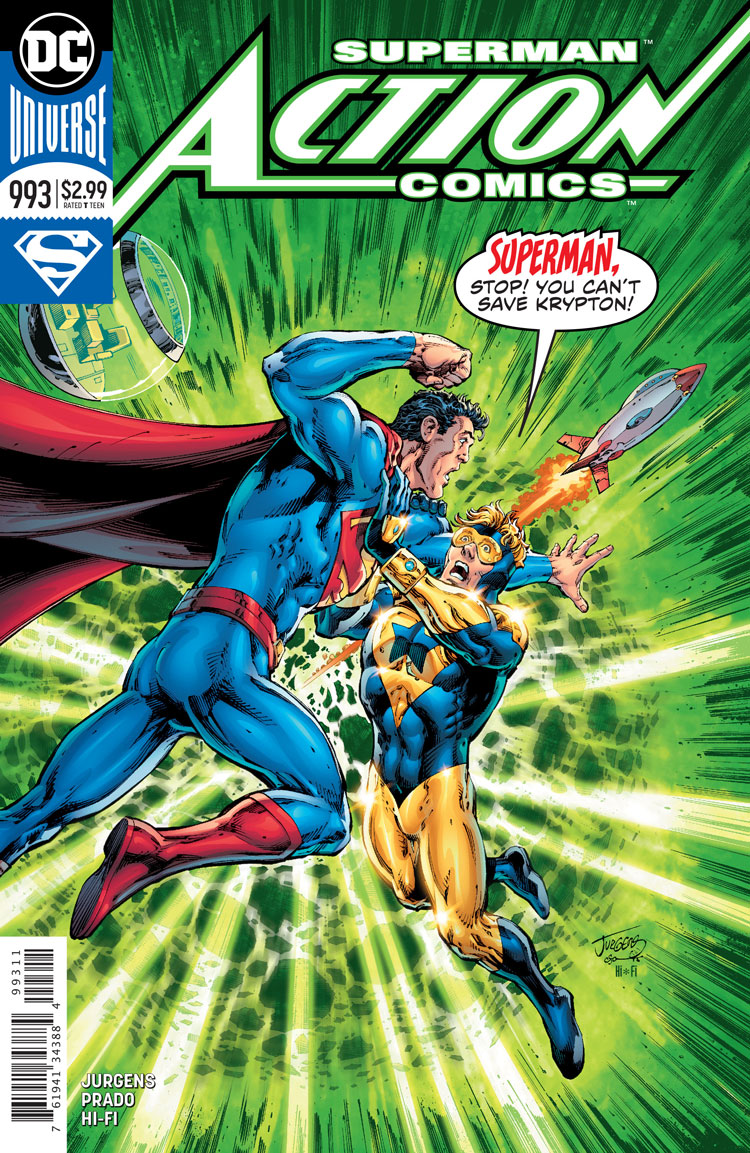 Keith Callbeck: 399 issues after his first guest appearance in the title, Booster Gold is back in the pages of Action Comics! This time, you are also picking up the pencil. How are you feeling getting back at the drawing table with two of the characters you are most associated with?

Dan Jurgens: I’ve been wanting to get back to the drawing board for quite awhile now.

It hadn’t been my intention not to draw but the reality of writing Action Comics (twice monthly) and Batman Beyond made it impossible. So, when we finally got the point where I could step in for a bit we decided to take advantage of that. And, yes, the fact that it’s a Superman/Booster story made it all the more fun. 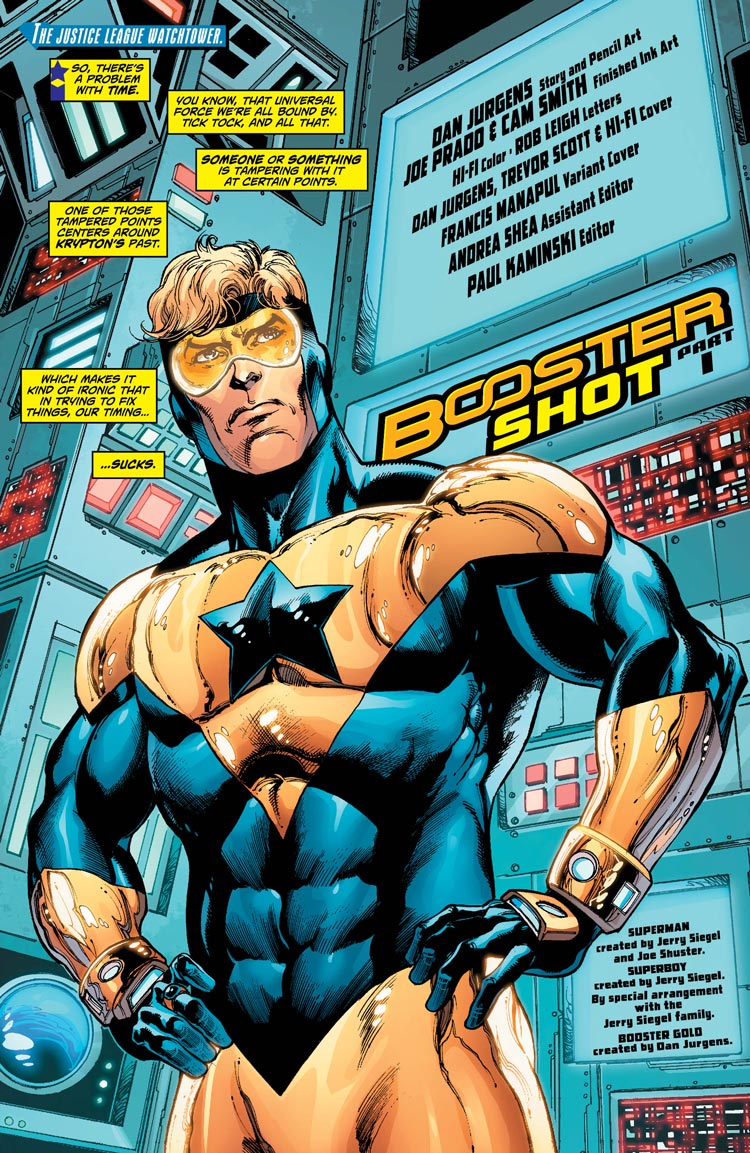 KC: It has been a while since we’ve seen Booster Gold. He was trying to sort out the Convergence last time out, what has he been up to since then?

DJ: We don’t address that specifically but we do convey the general idea that he’s been having fun jumping through time. I think there are some things readers can draw conclusions from as well, such as where, exactly, he came from.

KC: And we have Booster back in his pre-Flashpoint costume. Can we nickname this story Booster Gold: Rebirth?

DJ: I certainly approached this with the idea that it’s a bit of a Booster Gold Rebirth story. He’s been off the table for quite awhile now and things have certainly changed in the DCU since we last saw him, most notably with Superman.

I really didn’t want to get caught up in the continuity weeds on this one though I did want to make it seem a bit fresh and familiar all at the same time. If you remember Booster, you’ll enjoy it. If you’ve never seen him before, I think you’ll be intrigued by the notion of who this guy is. He’s quite a bit different from most of the heroes in the DCU. 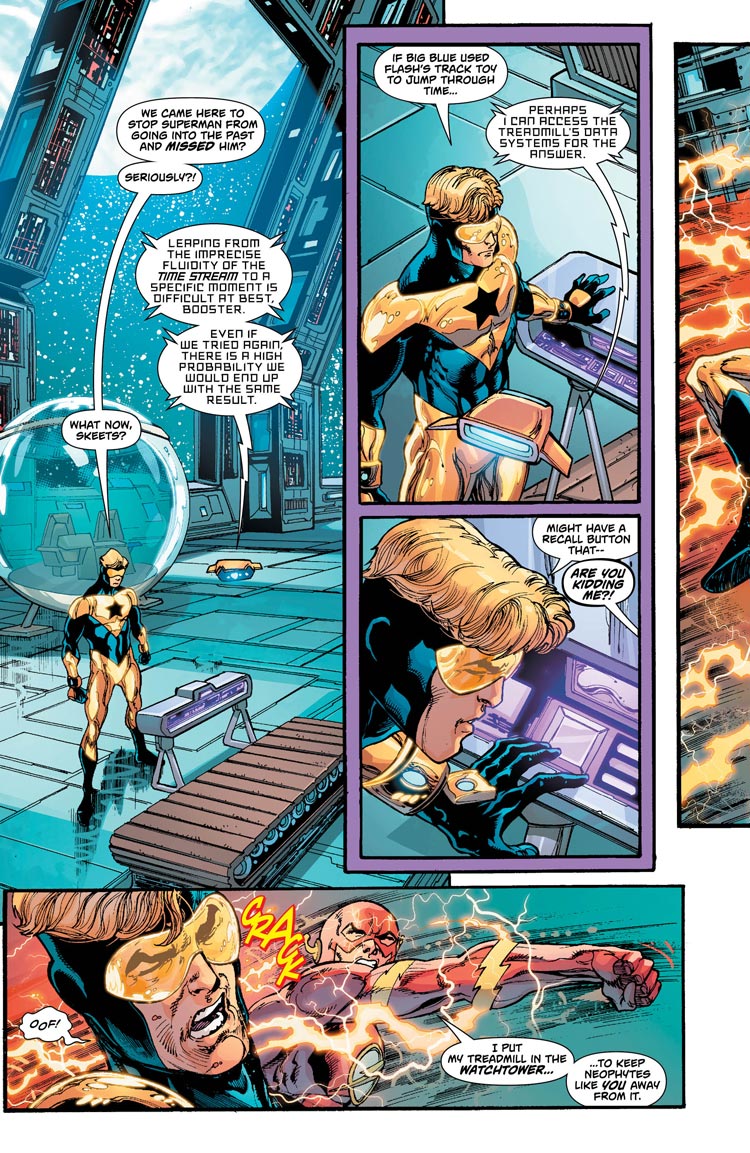 KC: I would expect Superman still has a lot of questions coming out of the last story arc. How does that lead to this story?

DJ: At this point, Superman really doesn’t know if the man who claimed to be Jor-El is really him. Was it an imposter or was his true father really taken from Krypton a split second before its destruction?

There’s only one way for Superman to verify that and that’s to go back in time and see it for himself. Of course, that’s a dangerous step—one that can, and does, lead to numerous complications.

As a Time Master, it’s Booster’s job to mitigate those complications. 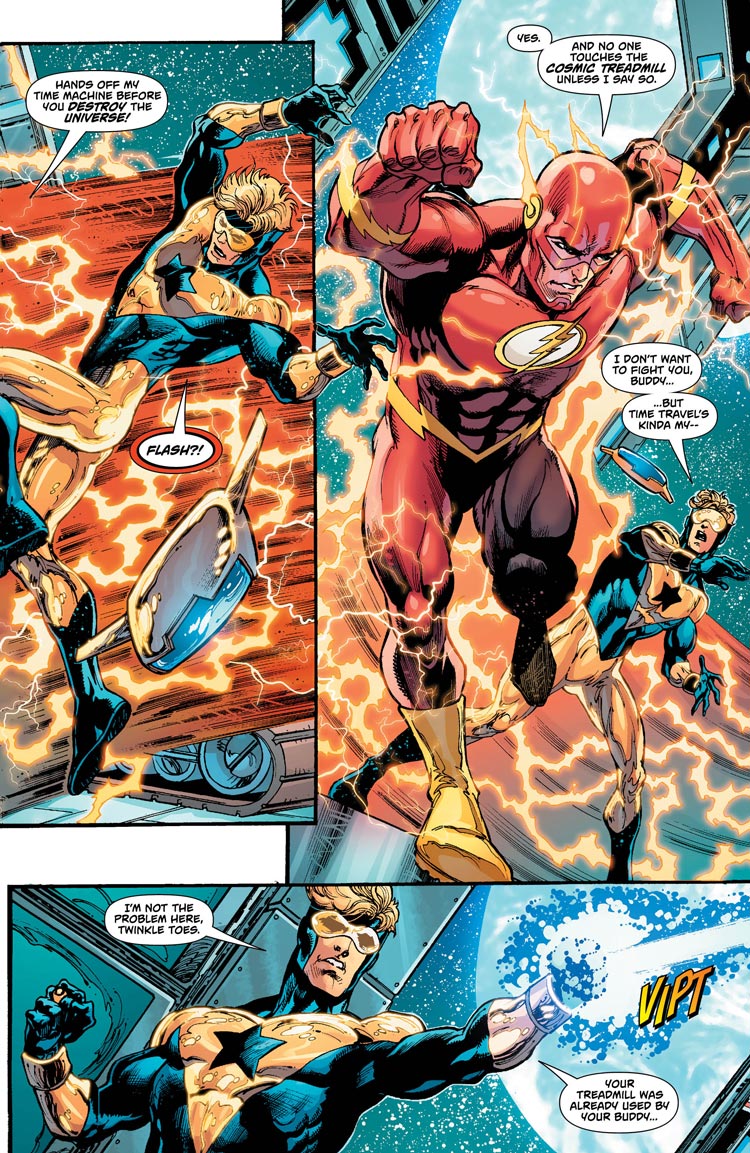 KC: “Fathers and sons” has been a consistent theme in your Action run since Rebirth. How does that continue to develop here?

DJ: It’s a theme that is certainly built around Superman and Jor-El.

But we’re also going to twist it in this arc as well, applying some of those same issues to Lois and her father, General Sam Lane. We find out through this that Jon has never met his maternal grandfather and that becomes a core part of the story. 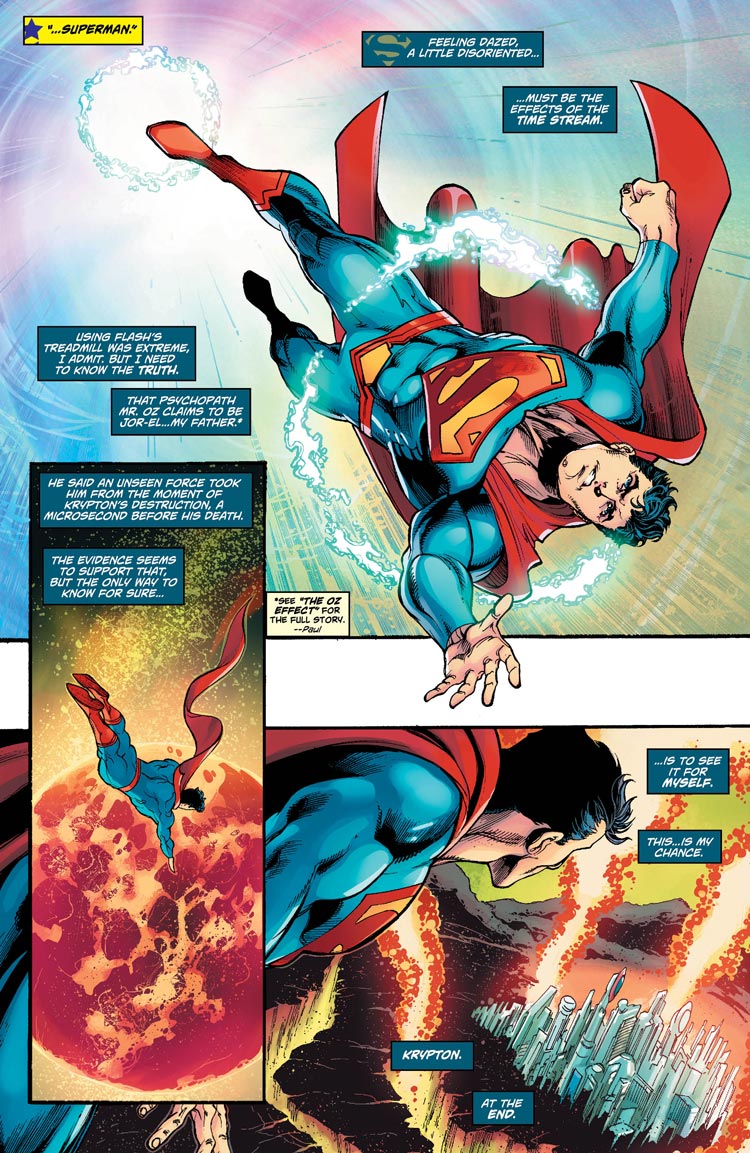 KC: This arc will also get you partnered with Brett Booth and Norm Rapmund. How is it working with Brett and Norm again?

DJ: They are both very talented creators, as well as friends. Brett has always been something of a Booster Gold friend and it’s been an absolute pleasure to see his pages come in. He’s done a great job of bringing his unique ability to the book and has given a great overall look. Will Conrad is drawing some of this arc as well and he’s equally fantastic. 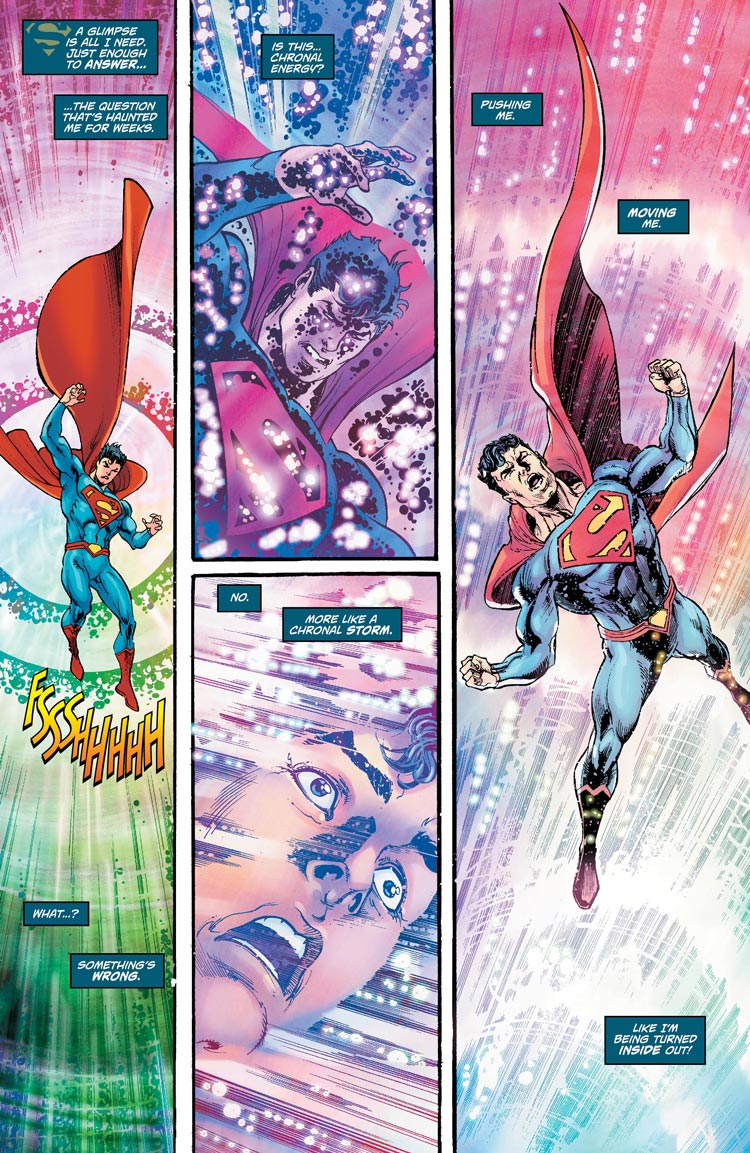 KC: It’s just past the 25th anniversary of Superman being killed by Doomsday, a character Booster himself named. How does the lead-up to #1,000 compare to those days?

DJ: The business was quite a lot different then. For one thing, there was no such thing as smart phones or social media. In fact, I’d have to think that the vast majority of households didn’t yet have a “home computer”. As a result, the “Death of Superman” hit with the sudden force of a hurricane.

I think Action Comics #1,000 is experiencing a slower, more prolonged build-up because everyone knows it’s coming. I mean, all anyone has to do is count. 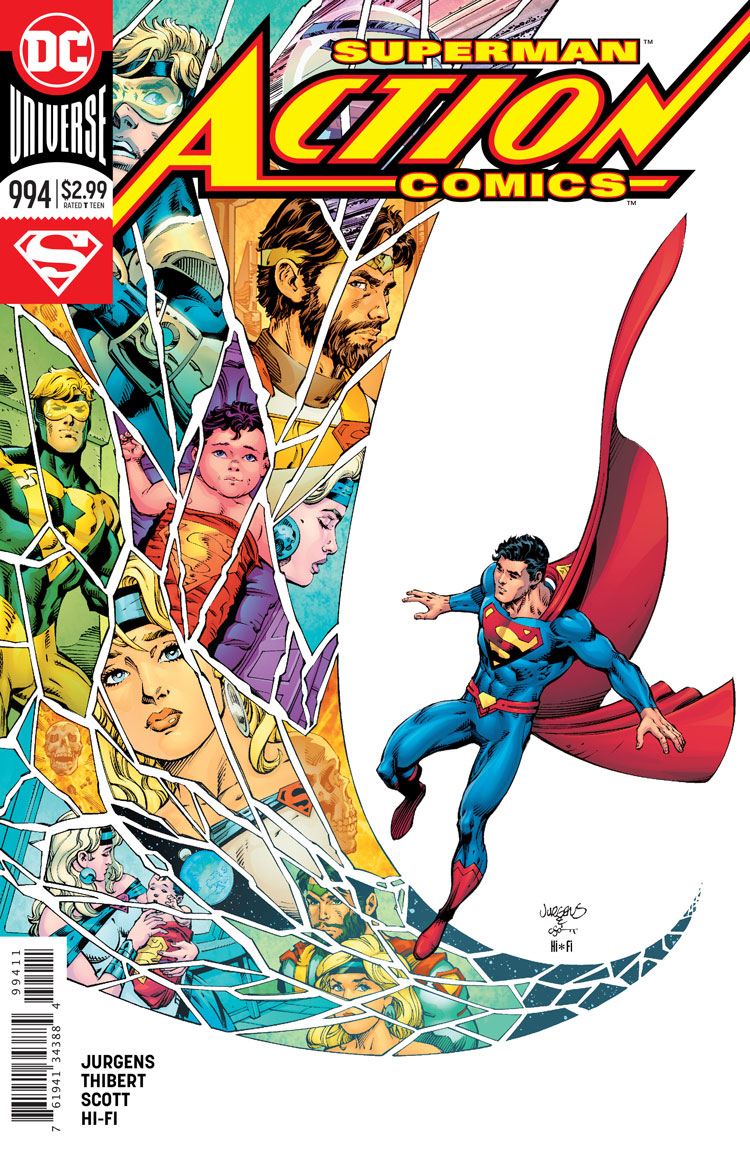 KC: The weeks are counting down (two at a time) to the landmark #1,000. Any teases for what might be around the next corner?

DJ: Right now it’s all about getting Action to a point where we’re ready for that issue and the things that come after. We’re trying to make it as special as we can for people and I think we’re well on our way to doing exactly that.

Don’t forget to grab Action Comics #993 with the return of Booster Gold — and Dan Jurgens on both script AND art — tomorrow at comic shops and online!