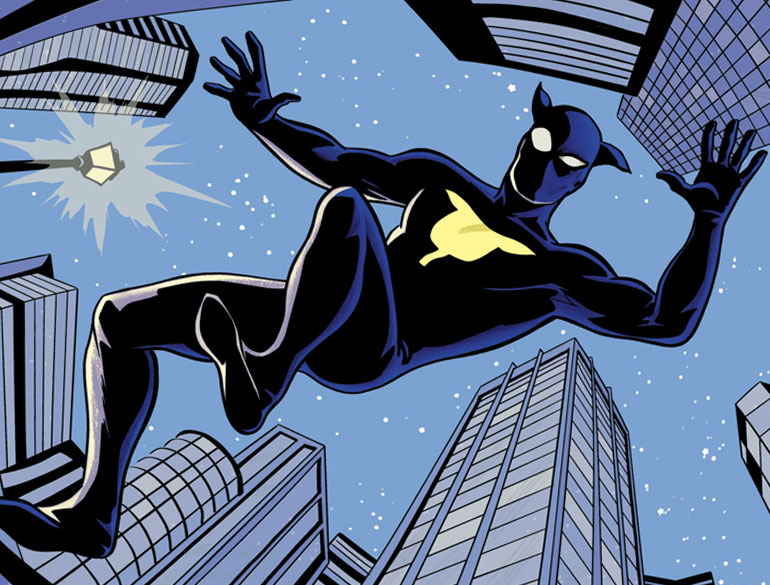 Who says comics aren’t fun anymore? With Archie Comics’ initial The Fox five issue series concluded and available in trade paperback, the time couldn’t be better to announce the upcoming The Fox ongoing series from Dark Circle Comics. We had a chance to chat with series writer and artist Dean Haspiel about his thoughts on the character, how he approached the initial Freak Magnet arc, and what is in store for the hero in the coming year! 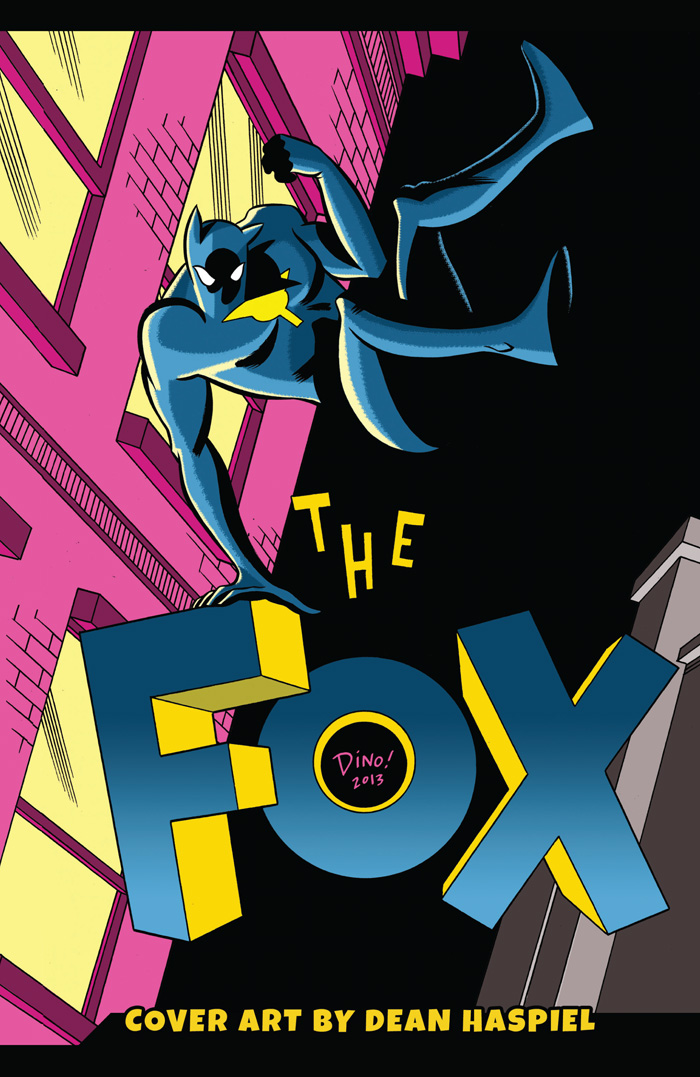 MSG: Dean, thanks for taking the time out to talk to Comicosity and congratulations of the success of The Fox! Why was this character, of all the Red Circle legacies, the one you wanted to tackle in an ongoing?

Thanks for your cheer and support.

I remember discovering Red Circle superheroes in the 1980’s at my local newsstand. The Mighty Crusaders were sitting next to The X-Men, and The Black Hood was sitting next to Batman. There were less mainstream comic books being produced back then, and I was hungry to read more superhero comic books. I remember picking up and devouring The Red Circle line, never making the connection that it was an imprint of Archie Comics.

Then, a short while later, the Red Circle superheroes disappeared! It didn’t occur to me to search for back issues (it wasn’t until I worked on some of the characters that I learned most of them were created in the early 1940’s) and so I moved on reading Marvel and DC Comics. However, one particular characterization stuck with me, and that was Alex Toth’s brief iteration of The Fox in the back of The Black Hood comic. I knew that someday I had to write and draw The Fox. So much so, I created a character called The Red Hook — inspired by The Fox — and the very comic that afforded me the chance to pitch and produce The Fox: Freak Magnet story.

MSG: The Fox is definitely a much more whimsical take on a pulp character than a lot of other recent re-envisionings in the market. Why did it seem fitting to you to take Paul Patton in that direction?

Frankly, I was getting sick and tired of all the murder and mayhem that has become popular in our mainstream superhero comics. Who knew the apocalypse could become so boring? And the superhero deaths? So many superhero deaths. So many superhero resurrections. Rinse and repeat. Horror is my favorite genre but I don’t want superheroes to be subsumed by horror. Didn’t the Joker once ask, “Why so serious?” I wanted to read and see the kind of comic books I loved growing up so that’s what I wrote and drew in The Fox: Freak Magnet story. I wanted to celebrate the kind of superhero comic book I love.

MSG: On the surface, the Fox is framed as a reluctant super-hero, but after several issues of wild adventures, I’m beginning to wonder. Is the Fox really just a “Freak Magnet” or does Paul revel in the adventure more than he lets on?

Paul Patton Jr. probably subconsciously revels in adventure more than he lets on, but by the end of the first issue of Fox Hunt, he definitely quits being The Fox. He can’t handle it anymore. It’s too troublesome for many reasons and he gives up the costume. Literally tosses it on the kitchen table.

If it were up to Paul, the rest of the Fox Hunt mini-series would have him exploring the transition between print and digital media, probably come to terms that he should reconsider his job as a photojournalist, go on a fishing trip with his son and spelunking with his wife. Yeah. That ain’t gonna happen.

MSG: We haven’t had too much of an opportunity to see Paul interacting with his wife Mae, although her role as She-Fox has been alluded to pretty significantly. Will we see more of Mae in upcoming series and how do you think Paul’s marriage changes his perspective in the field?

We will see more of Mae and Shinji (their son) in Fox Hunt. They become critical to the story and Paul has some serious realizations of what it means to be a reluctant superhero with no superpowers in a town bumbling with super-powered freaks and animals. Despite the debate of whether or not superheroes should get married, I can’t think of a sexier way to woo your significant other than to add a little bit of costumed danger to your romance.

MSG: In this first mini-series, we’re seeing the Fox traveling back to the past to conclude the initial Freak Magnet story arc, teaming him with veteran hero The Shield. Why was it important to set the Fox up as a second generation hero, and how much will we see (or does he know) about his father’s exploits?

Paul Patton Jr. is The Fox I was given to write and draw. He may be a little older than some of the newer heroes but he’s also current with common problems. I do have an idea of how to use his father, the original Fox, but I need to explore the stuff that makes Junior tick and how that impacts his family and his city. Paul is fully aware of his father’s legacy and that’s something he struggles with.

MSG: And, of course, we have a third generation hero in The Fox’s daughter, Fly-Girl of the New Crusaders. We’ve seen Paul spend a lot of time wanting to return to Mae and his marriage, but not as much thought from him devoted to the daughter he’s supposed to reconnect with. Is a team-up a foregone conclusion or something Paul might be avoiding?

The latter. Paul is not only a reluctant superhero but a lousy father and that’s something we explore in Fox Hunt. Nobody is perfect, especially a guy who is occasionally willing to wear blue tights with floppy ears to draw out the bad guys. And, perhaps, that’s where Paul’s true comfort zone lives. He’d almost rather wake up tied to a chair with a black eye and bloody lip than confront the fact that he was a deadbeat dad. Stuff for him to ponder and reconcile while bringing the pain to punks.

MSG: You started out the first four issues of the series with Mark Waid on scripts, and then partnered with writer J.M. DeMatteis. How has the working process been with each writer?

I conceived the overall story, concocted the plot for the first four issues, and recruited J.M. DeMatteis to write The Shield back-up feature knowing it would secretly coincide with The Fox story and culminate in issue #5. Mark Waid and I have threatened to work with each other for years and finally got the chance to do that on this project. We employed ye olde “Marvel Style” method, wherein the artist blocks out the story and draws it, giving tonal notes and occasional text suggestions for the writer to script and dialogue.

I could have written The Fox but it wouldn’t have “sounded” nearly as snazzy and read nearly as succinct and beautiful as Mark wrote it. Same with J.M., who flexed his particular brand of awesome, sowing up the tale into a magnificent symphony of consequence, courage and hope.

MSG: Looking ahead, what can you tell us about the next series of Fox stories — Fox Hunt?

What we have planned amps up the stakes in the upcoming Fox Hunt.The Fox has inadvertently annoyed a wealthy psychopath and a million dollar bounty has been placed on his head. A rogues’ gallery comes out of the woodwork on the eve of photojournalist Paul Patton Jr’s retiring of his Fox persona for a better quality of life: a pox The Fox cannot escape.

If you dig what I did on The Fox, please make sure to pick up my new graphic novel, Fear, My Dear: A Billy Dogma Experience from Z2 Comics, and look out for something “sensational” coming from me and writer Neil Kleid in the Fall.

Dean Haspiel is once again the writer on the upcoming The Fox: Fox Hunt series, debuting early next year from the Dark Circle imprint of Archie Comics.