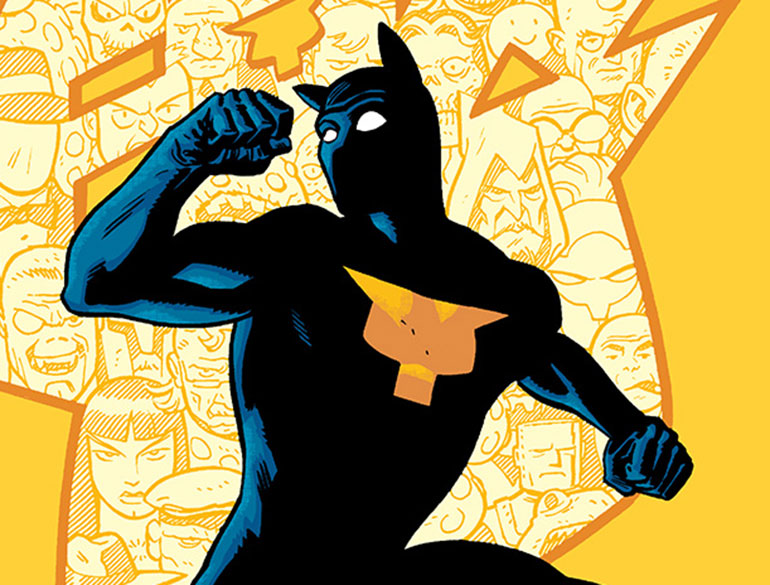 Dark Circle Comics continues its launch this week with an all-new The Fox #1, debuting the “Fox Hunt” storyline. While it’s going to be an all-new series, some things remain the same, like writer/artist Dean Haspiel at the helm! Haspiel took a few moments out to share his thinking on Paul, his wacky alter ego, and what could bring all his enemies down on his head at once! 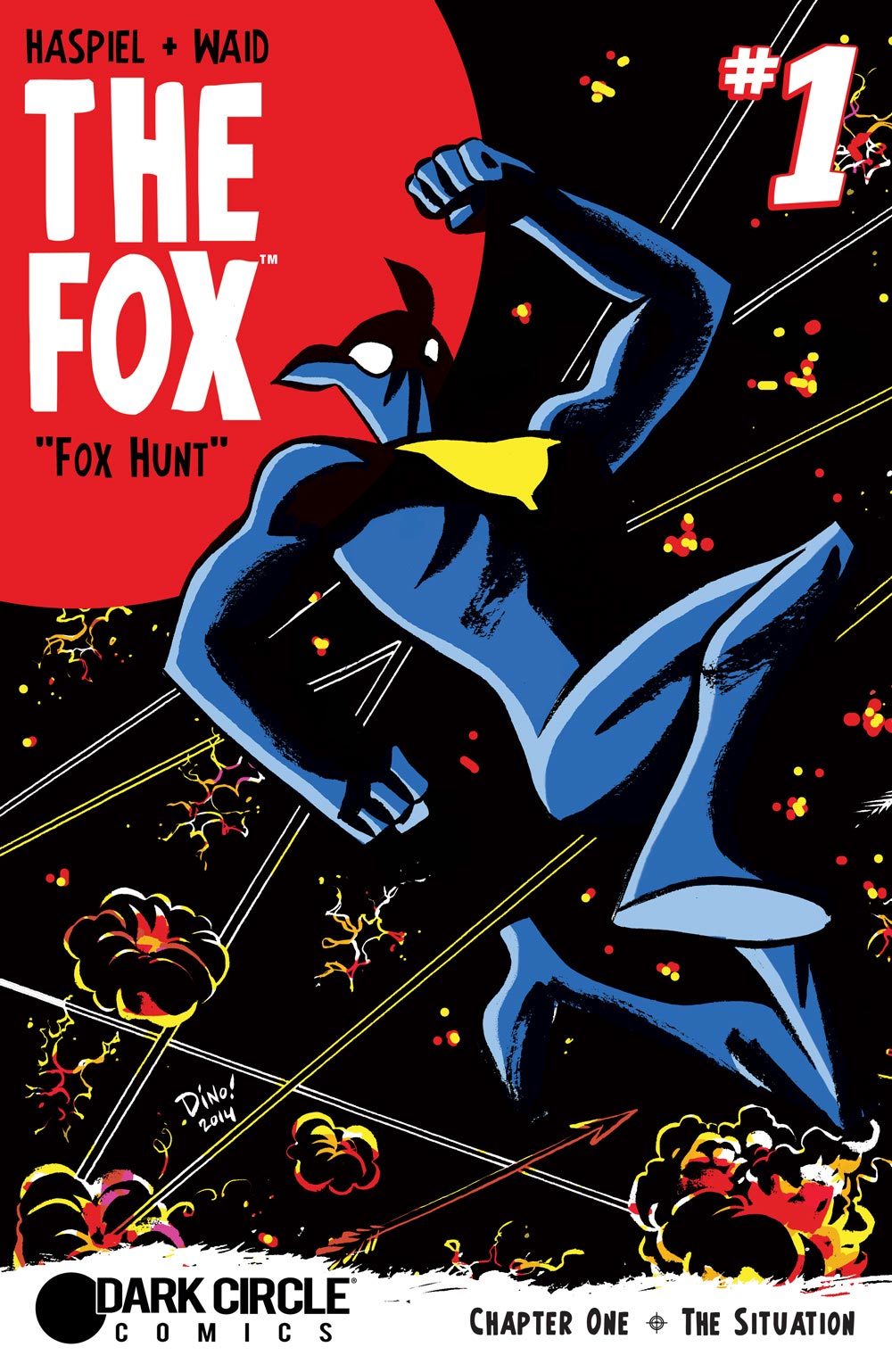 MSG: Dean, thanks so much for taking time to talk about your new The Fox series, “Fox Hunt”! How did the new series start to percolate in your head and did its place in the new Dark Circle launch change your thinking on it at all?

DH: I originally pitched a very different concept to editor Paul Kaminski when I started thinking about a sequel to “Freak Magnet.” I wanted to do a story about a guy with no superpowers (The Fox) having to mentor a kid with every superpower to prepare him for the coming of a catastrophic threat to planet earth. Kinda like Lone Wolf & Cub meets OMAC by way of Shazam!

It’s a story I may tell someday, someway. But, as much as Paul encouraged my idea, he counter-offered a concept in two words: “Fox Hunt.” Suddenly, neurons fired into a wholly different direction and I started thinking about Darth Vader and Han Solo and Boba Fett. A million-dollar bounty would be placed on The Fox’s head. I just had to figure out by who and why.

When I was teaching comics in Denmark early last year, I spent my nights designing “Fox Hunt” and came up with too much story. Once Paul and Dark Circle chief, Alex Segura reviewed my concept, they asked me to reign it in and focus on the the bounty, a rogues gallery of villains, and The Fox family. So, I actually have another major story idea I’d like to tackle that involves therapy, an ex-girlfriend, fossil fuel and the resurrection of a Tyrannosaurus Rex.

Now that I’m in the middle of drawing “Fox Hunt” #4, I recently thought of a sequel that I think would make for a proper Fox trilogy. And, boy howdy, does it get dark. Fingers crossed The Fox sells well enough to let me tell all these tales. 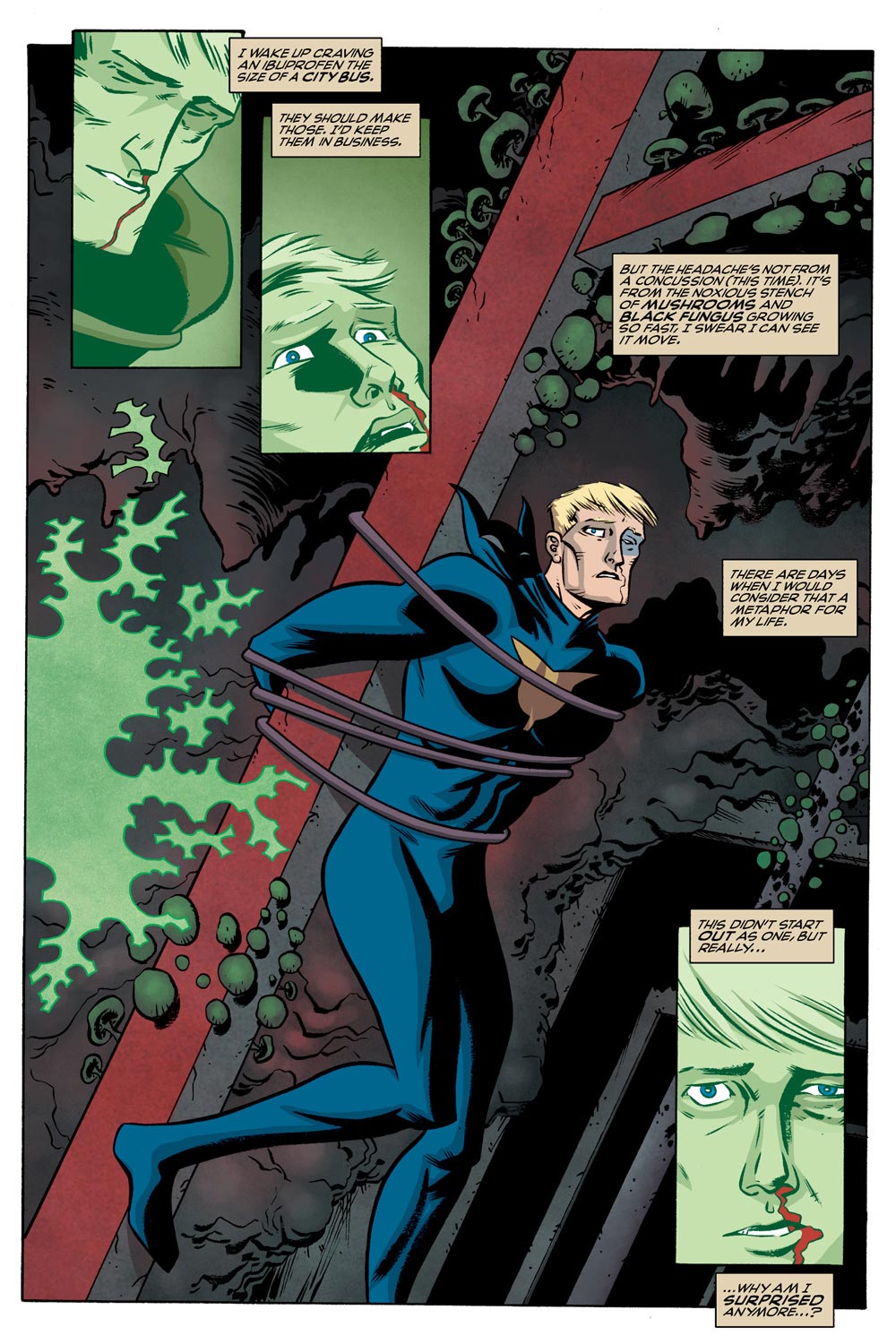 MSG: “Fox Hunt” is beginning with a look into Paul’s own past. How much of the actual history of The Fox are you referencing versus creating from whole cloth?

DH: From what I’ve seen and read of The Fox, which isn’t that much, I’m wholly creating Paul’s past. Remember, Paul Jr. is the son of the original Fox. I gave him a first home, a first love, and some nostalgia. I really want to dig into what happened between Paul and his father because I think there is some heavy stuff to excavate there.

MSG: Along the same lines, The Fox has a rogues gallery that may or may not be familiar to modern readers. How much research or original design went into developing the crew that will be coming after Paul in upcoming issues? Were there particular influences for you?

DH: I rummaged through the Mighty Crusader’s villain gallery and picked bad guys that I thought would be fun to draw and put in a scene. Almost everyone The Fox fights has superpowers so I needed “red shirts” that he could eventually dispatch via wit, wisdom, and sheer luck.

The Gasser is the only regular villain The Fox seems to run up against. So, I redesigned The Gasser to look more menacing. I was inspired by an Alex Toth design of The Fox from the 1970’s that always looked really cool to me. 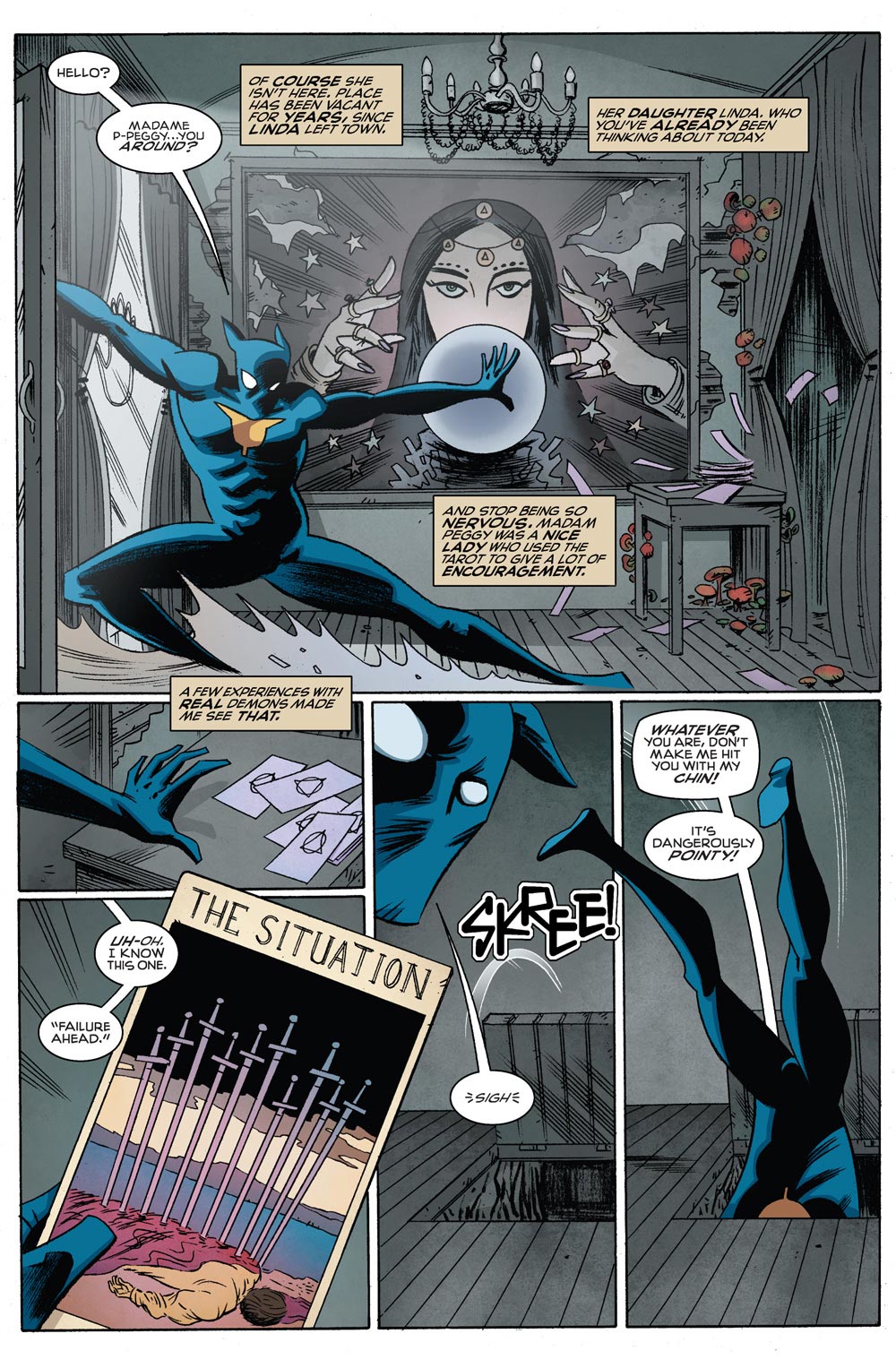 DH: Family is a concern we all have. Whether married with kids or single and cavalier, we all think about who our family and friends are and what they mean to us. It’s the glue that makes our personal community.

Like a family of cops, the Patton clan now has a history of passing the Fox baton to the next generation. Even Mae, Paul’s wife, who hails from Japan, occasionally zips into her She-Fox persona to help out when the going gets rough despite all the efforts Paul makes into ending the Fox streak. If only he’d just quit complaining and own it already!

MSG: This is now your second collaboration with writer Mark Waid on The Fox. What do you feel Mark is bringing to the series that is unique and how does your collaboration work in the writing process?

DH: My first job on The Fox is to try my very best to show and tell a story I’m happy with while making the editors excited.

My second job on The Fox is to drive Mark Waid bananas! And, if I have, his stone cold poker face will never let me know it.

Meanwhile, every script Mark turns in makes me swoon and, not only does it entertain but it educates me, too. Sure, we work in ye olde “Marvel style,” wherein the artist plots and draws the story and the writer scripts the dialogue, but Waid caulks all the holes and puts a nice coat of paint over the entire structure. I’ve said it before and I’ll say it again, Mark Waid is the Comix Whisperer. 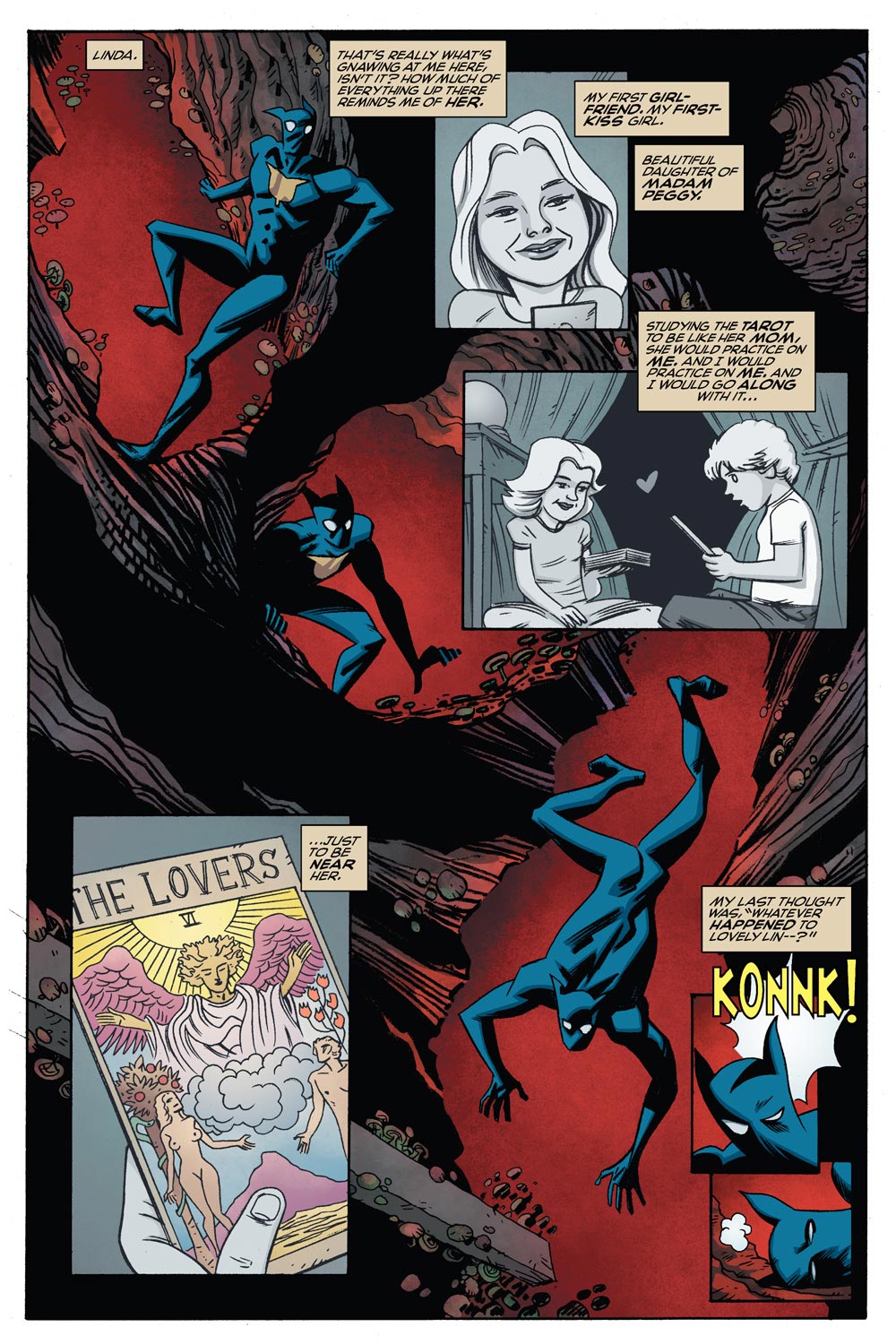 MSG: As the sole artist on The Fox, what opportunities is this new story arc bringing you that you didn’t have in “Freak Magnet”?

DH: I recently broke out my brush again, which I’d only reserved for cover art. I’ve mostly been digitally inking my line art because inking with a brush takes me longer and there are different artistic considerations to reconcile. I vacillate between employing a sharp-noir look for The Fox and a gritty-Silver Age style.

As I grow as a cartoonist, every job has its qualifiers and I’m still learning The Fox. As zany as “Freak Magnet” was, I knew we were going to get a little more serious in “Fox Hunt,” and I hope some of the art reflects that tone. Issue #3 was a lot of fun to draw because of a certain demonic antagonist who just wants a second date, and issue #4 has been my favorite issue to draw to date because it’s a rock ’em sock ’em, psychedelic-horror.

MSG: Any final thoughts or special teases for the first issue of “Fox Hunt”?

DH: In the first issue of “Fox Hunt,” we learn a little bit about Paul Patton Jr.’s past while he does his best to be a good and present father to his son Shinji. What should have been a mundane yet sweet story about a father and his son visiting a small, defunct town being readied for a watershed that would have made American Splendor and Harvey Pekar fans plotz with glee, quickly turns into a tarot-warned, toxic mushroom-infused conflict between what was, what could have been, and what will never be for The Fox and his family. 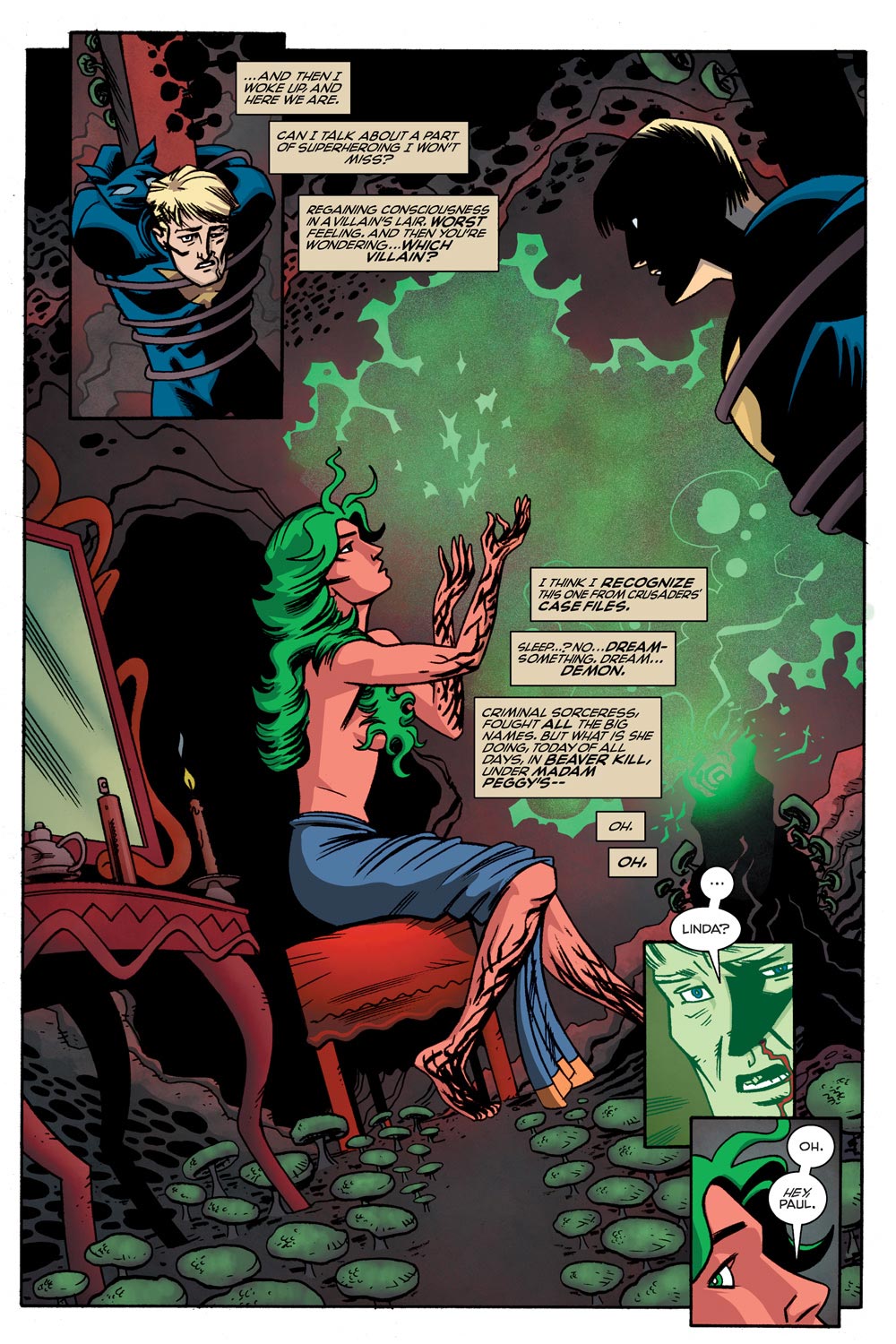 “Fox Hunt,” the new storyline beginning in Dark Circle Comics’ The Fox #1, arrives in comic shops and online this Wednesday! In the meantime, check out Comicosity’s advance review.

NEW ONGOING SERIES FROM DARK CIRCLE!
THE FOX is BACK!

Emmy Award winning writer/artist Dean Haspiel (Billy Dogma, HBO’s Bored to Death) is once again united with Eisner award-winning writer Mark Waid (Daredevil, Thrillbent) for FOX HUNT: Part One “The Situation”: When a billionaire philanthropist prepares Paul Patton Jr’s home town for demolition, our hero is sent on assignment to photograph the event. But what strange force lurks in the shadows, and why will it take Paul’s alter-ego, THE FOX, to stop it? The answer is the beginning of a deadly FOX HUNT and you won’t believe what happens next! 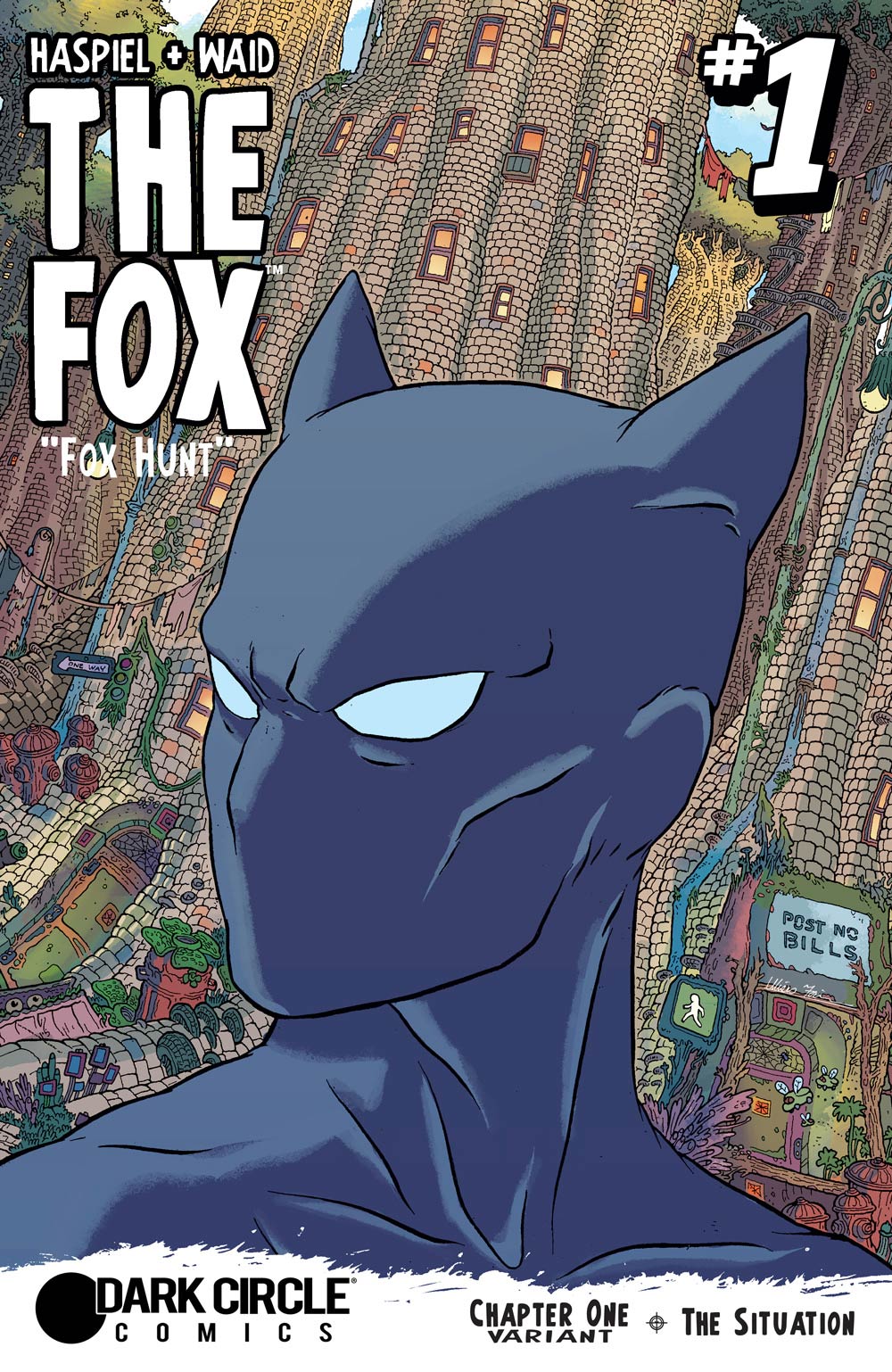 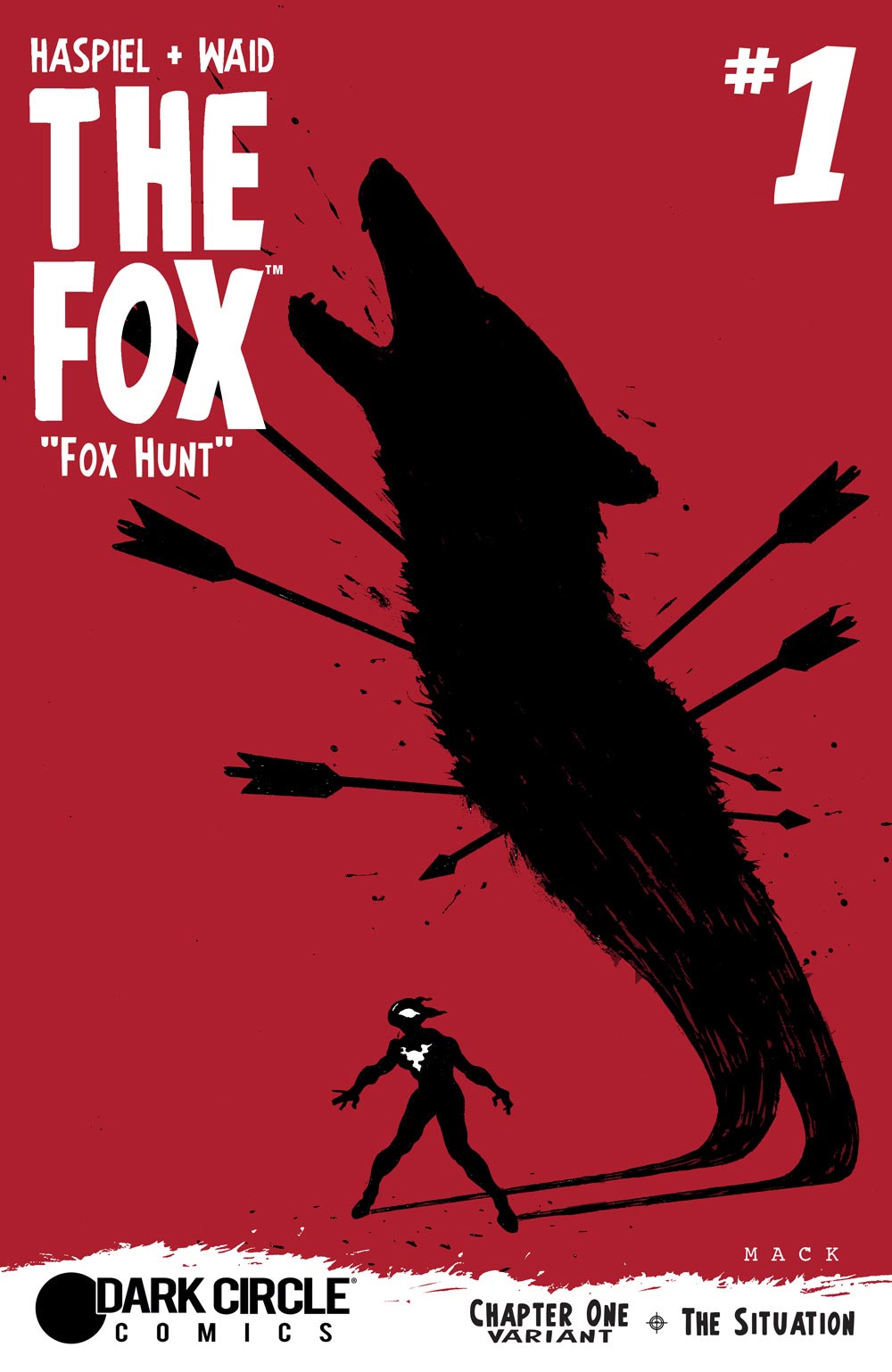 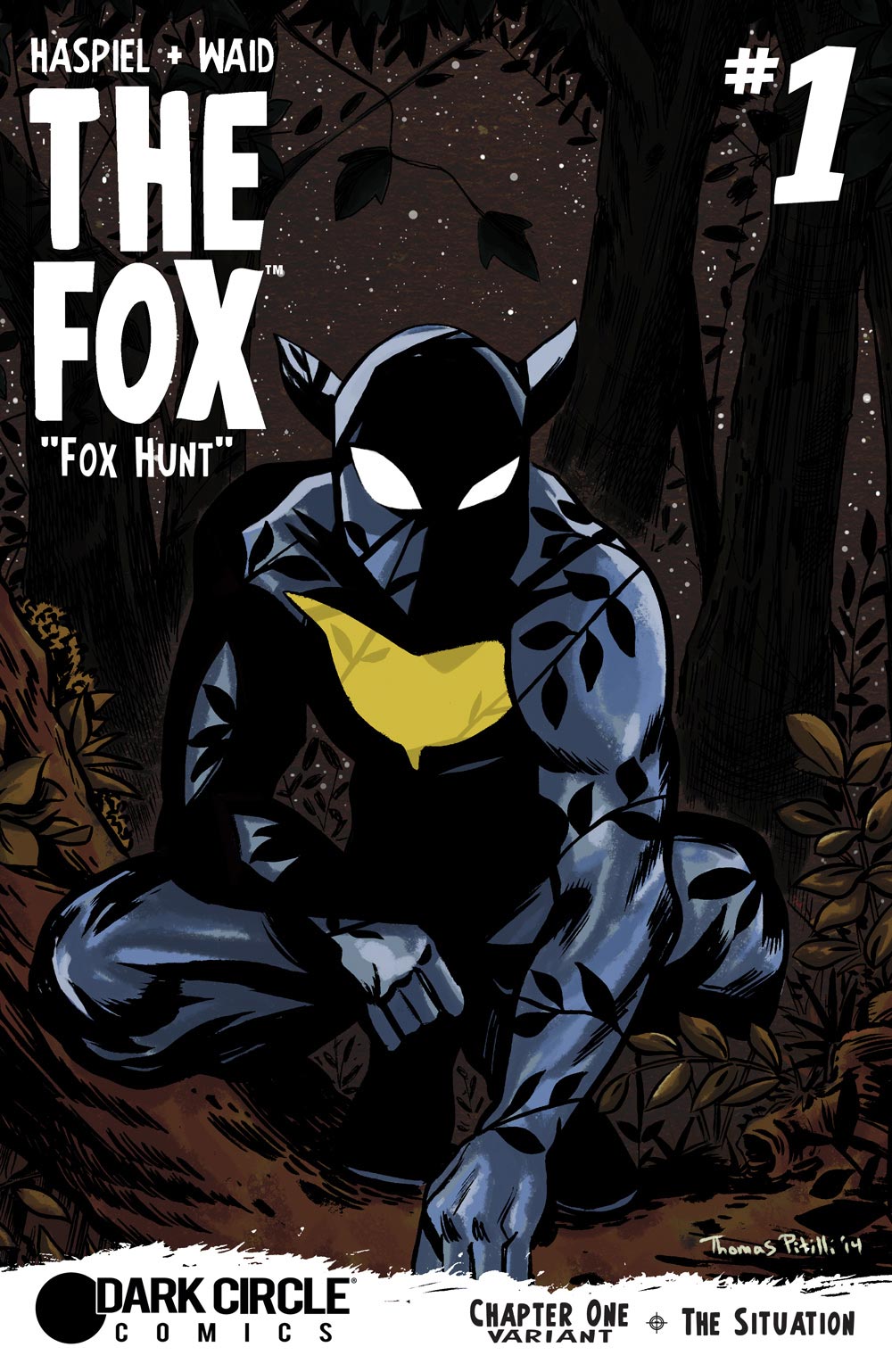 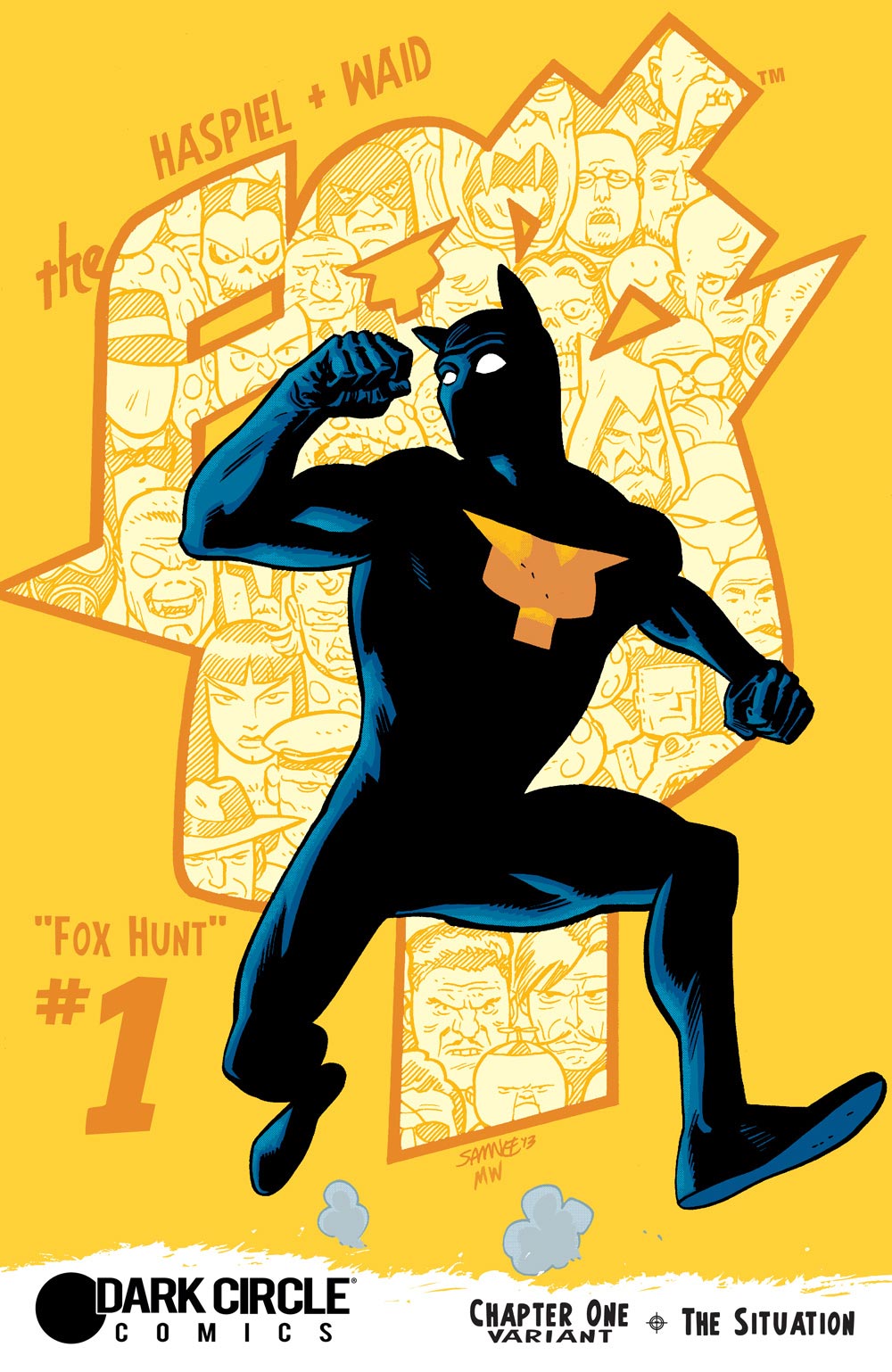