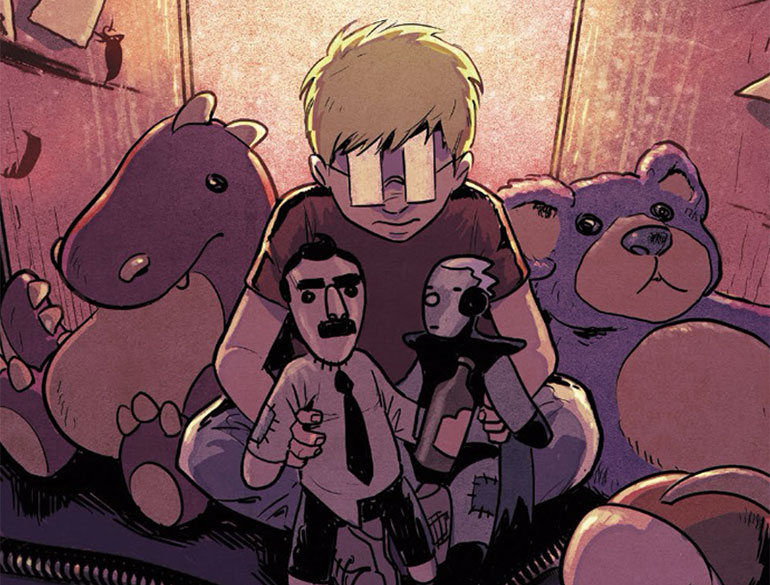 Vault Comics is one of the newer publishers hitting the scene with diverse creators and content, home to Heathen by Natasha Alterici, Zojaqan by Colin Kelly, Jackson Lanzing, and Nathan Goodan, and now Maxwell’s Demons by writer Deniz Camp and artist Vittorio Astone. Camp was on hand to walk through some of the influences behind the new creator-owned series, the lead character Maxwell, and some advice on breaking into comics.

Matt Santori: Congratulations on the new series! Tell me a little bit about your background and how you came to work with Vault Comics on Maxwell’s Demons!

Deniz Camp: Thank you! My background is a little non-traditional, I guess. I did all of my training in sciences, went to med school here in the states, worked in some hospitals around South America and Turkey and found myself deeply dissatisfied. I moved to New York City and, after some painful self examination I made the command decision to completely change my life and try to write comics for a living. 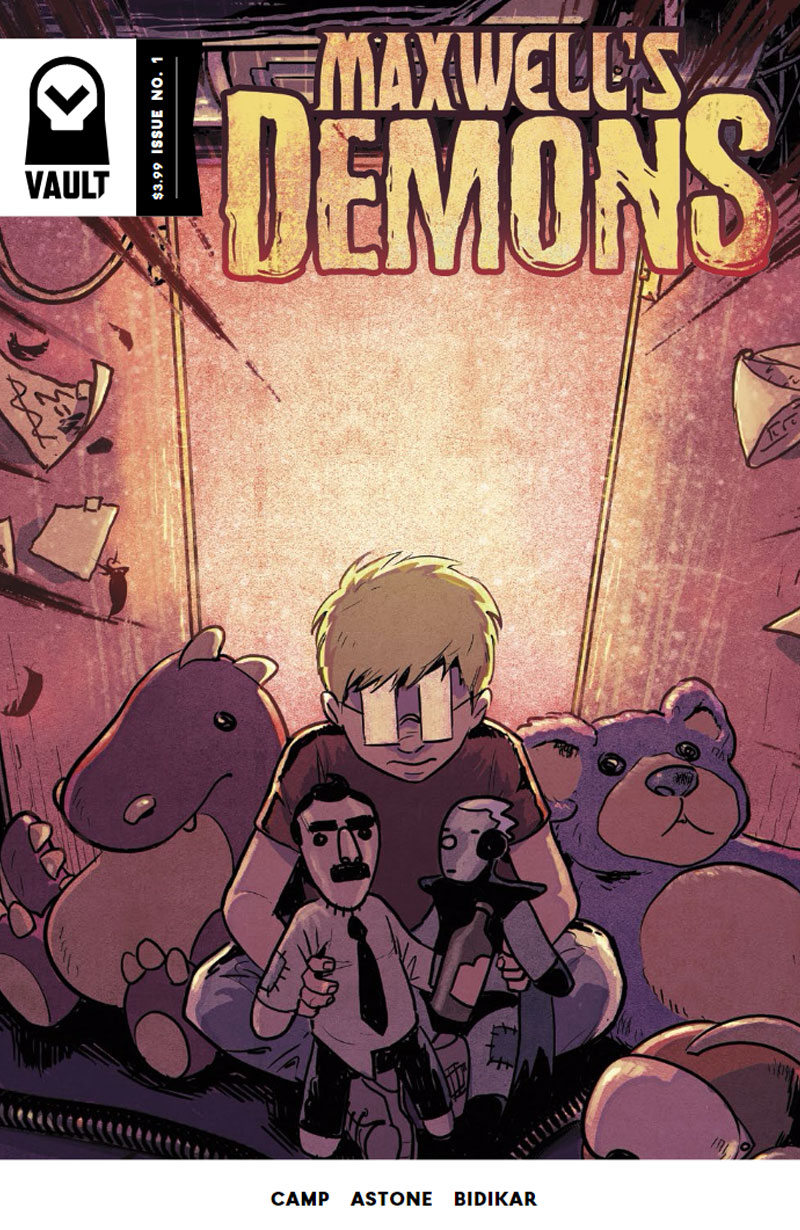 From there, the precise path was obscure but the general direction was clear enough. I wrote scripts, all of those first ones very bad. A lot of false starts and uncompleted projects and undrawn scripts. But the work works, and with Maxwell’s Demons #1, I thought I had something that could be special, with the right artist. I contacted Vittorio on Deviantart and asked if he might be interested in a collaboration. The rest, as they say, is the series of events that happened in the reverse temporal direction. (Wait, that’s not how the saying goes, is it?)

In 2015 I won the Millarworld Talent Contest for my STARLIGHT entry, and some months later I sent a pitch along with the first full issue of Maxwell’s Demons to Vault, and Adrian (EiC of Vault) and Damian (Publisher) got excited about the project from go and told me they wanted to do it. I was, of course, over the moon.

I haven’t yet managed to find my way off of it. Please send help. I’m sick of eating cheese and the native inhabitants have lunatic eyes. 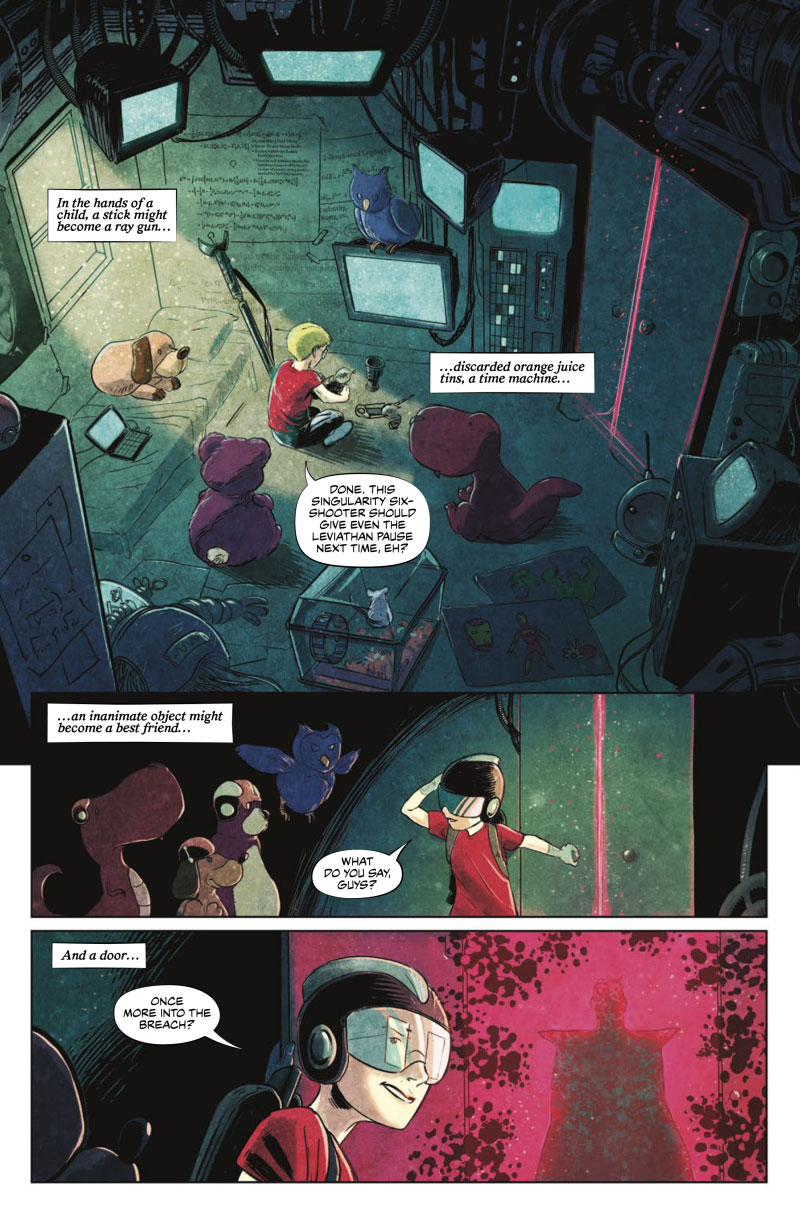 MS: Right away from the preview, it’s clear that a lot of influence is coming from the work of writers like Alan Moore and Grant Morrison, particularly in the juxtaposition of ten-year-old Max with this other world he’s inhabiting. How did you go about developing his character?

DC: And with these comparisons you’ve launched me from the moon to mars. Throw some poop-mushrooms on the grill Matt Damon, you’ve got company!

The story, despite it’s grand scale, it’s all character, so getting into Max’s head was VERY important to me. Max is brilliant, and that brilliance – and his own character flaws and mistakes – isolates him from so much of the world.

But Max is a dynamic character, as we all are. The structure of the story we’re telling – a series of done-in-one stories that follow Max at various points in his life, arranged non-chronologically — precisely allows us to demonstrate the evolution, growth, and sometimes regression of the character. We see him as a boy, an old man, a teenager, a man of middle age. Comics is a wonderful medium, but showing character growth and depth organically is not its strongest suit. But by ignoring that control-freak Time, we can not only show the dynamics of the character, we can create mysteries as to what led to the (sometimes dramatic) changes. 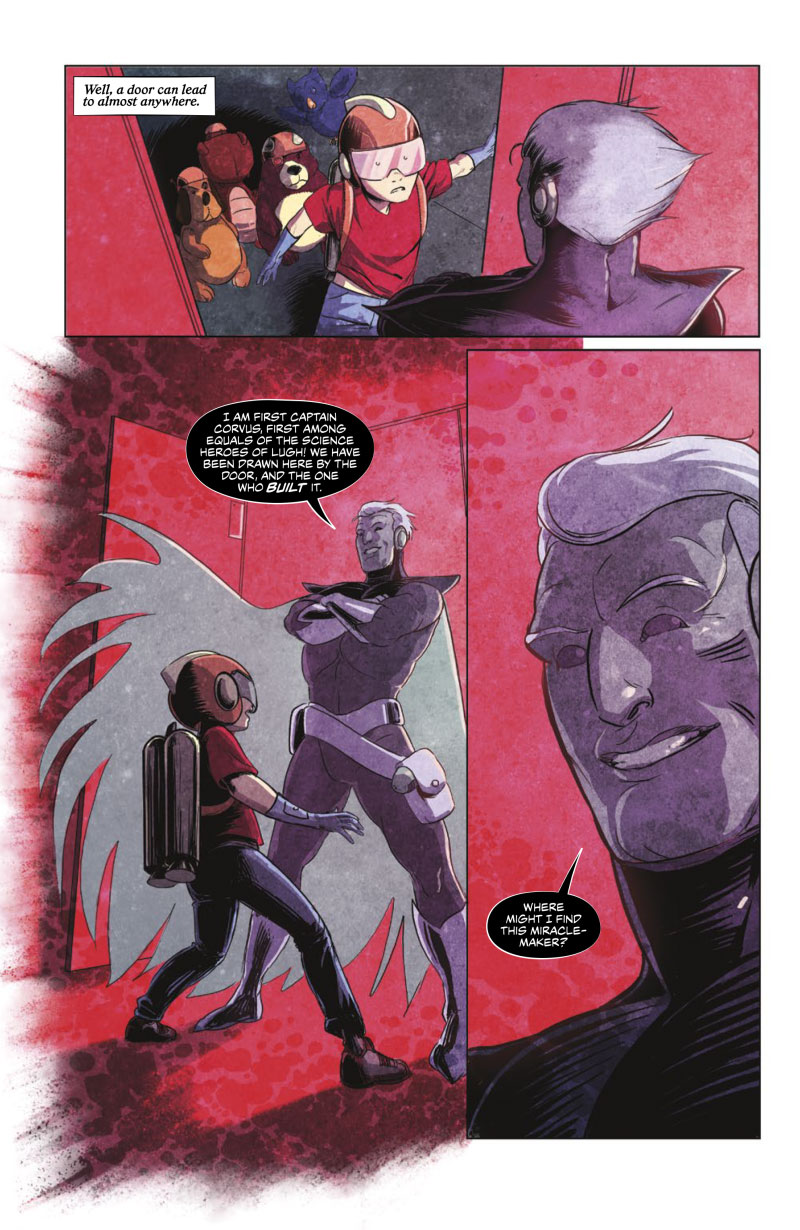 I could name a number of influences, real and imagined, but like most characters, Max is an intensely expressive creation of his writer. That’s sort of the beauty of fiction, though: so much of what feels very personal to me probably feels very personal to others. We’ve all, at some point, felt our faces pressed up against a glass separating us and the world, haven’t we?

Hopefully I’m able to express those feelings in a way that allows readers to see something of themselves in Max.

MS: One of the things that struck me right away about Max’s home situation is this sense of neglect, maybe abuse, from his father. How are you thinking about the parallels or differences between the challenges he’s facing as he passes through those doors and those waiting for him when he returns?

DC: It’s all part of the plan, thematically and in terms of plot, is what I’d say. Max is so smart that he’s literally made his own friends, out of spare parts and stuffed animals. His response to a world that rejects and despises him is to simply go to another one. But what’s he looking for? What’s driving him? You don’t get to leave that stuff behind you. You can travel to Turkey, to South America, to other dimensions or living worlds, but that…that you carry with you. And you either face it, or it eats you alive. 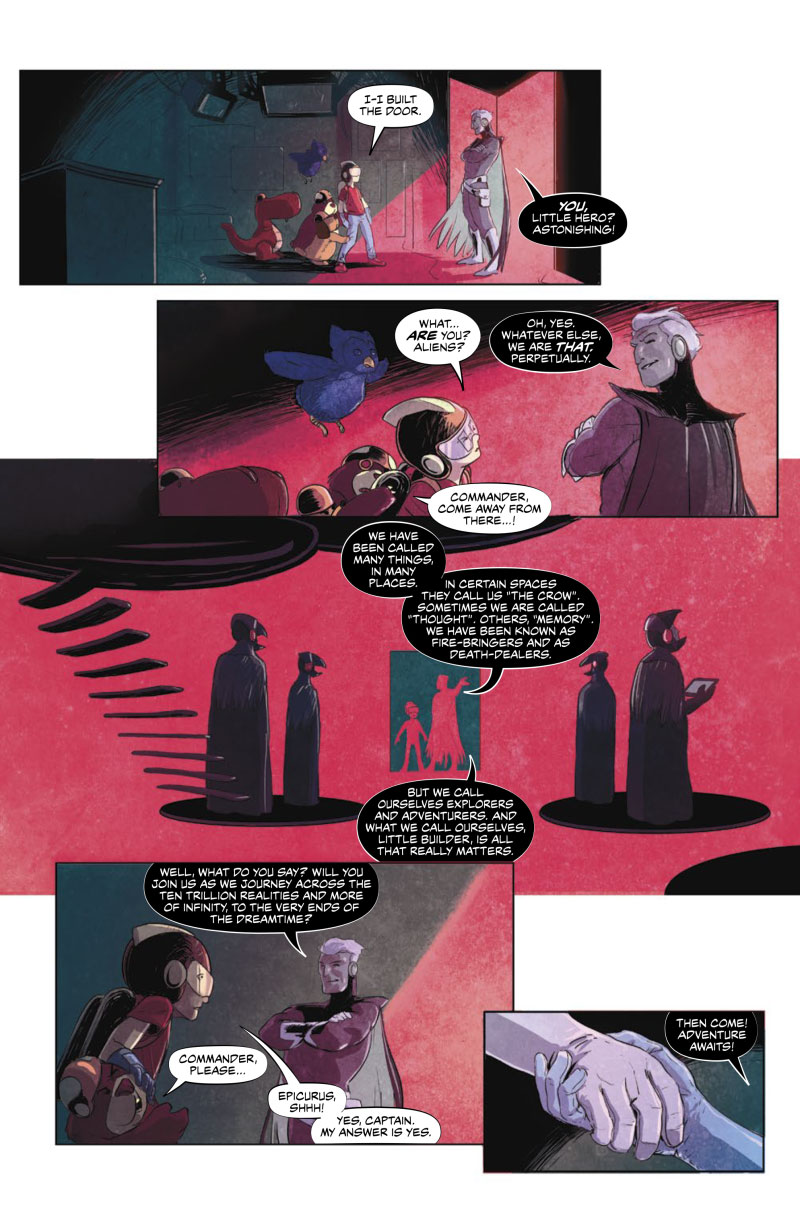 MS: It’s a pretty fantastic world you’re developing with artist Vittorio Astone. How has that collaboration been working and what do you think he’s bringing to the series that is unique?

DC: He’s amazing, isn’t he, Vittorio? So much of all the gorgeous world building you see in the series is just Vittorio doing his thing. The collaboration has been phenomenal. I think I speak for us both when I say that we have become not just creative partners but friends throughout the process, pushing each other to be better, often getting derailed by personal talk. I like to put little jokes and stories in the scripts just for him and Adrian (our editor). Sometimes he turns those stories into something that’s tangibly on the page, giving an entirely new dimension to the work. It’s something that most wouldn’t be able to point to but, I’m convinced, most do FEEL.

Vittorio does not just ink, he is also coloring the book. Vittorio can do anything, and having a creative partner in such tight control of the work means we can try stuff, formally, that might get muddled with too many other cooks in the kitchen. And then Aditya, our letterer, comes in and he lays down the flow, he is the master, your eye is the apt pupil and it follows his every command. (see what I did there?). It’s a dream creative team, which is something that almost everyone says, but it’s one I feel is particularly fitting here.

MS: The prose style here feels very literary, almost old school adventure drama a la Treasure Island or The Lion, the Witch, and the Wardrobe. How did you settle on tone and voice for the series and how do you expect it to impact the read?

DC: I didn’t really settle on one, is the truth.

For this issue, I wanted precisely that sense of a storybook, and Aditya helps get that across with the lettering he uses for the omniscient narrative thread. It felt fitting that, you know, this is a boy’s adventure kind of story (at least at first), this is the first issue of a thing, it’s something we’re hoping feels larger than life…it just felt right to put a voice to it that brought to mind all of that.

But the story is going to radically reinvent itself almost every issue, and the narrative will change accordingly. We’re paying close attention to the formal considerations here. One of the things that makes comics unique is precisely that plethora of formal options — it’s very much like poetry in that regard — and I plan to take advantage of just that. 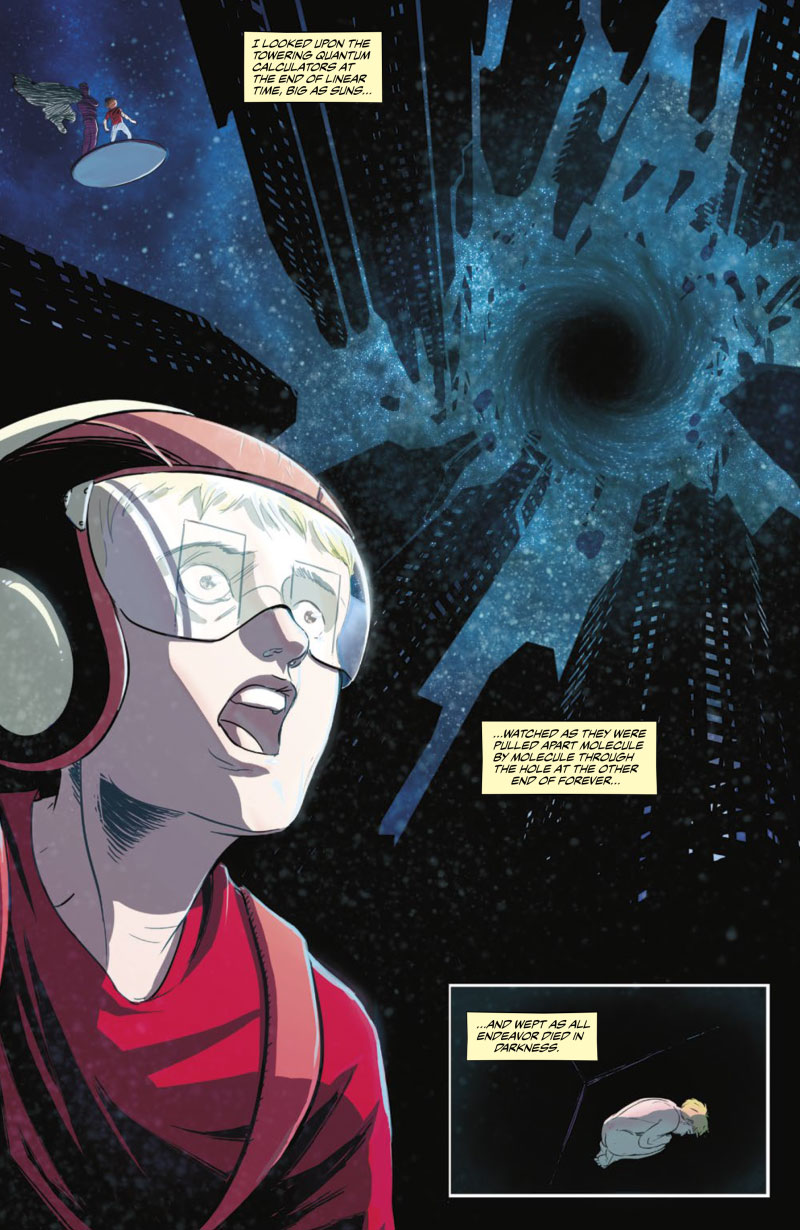 MS: What advice would you give creators just starting out in comics, as someone who has broken into the industry in a pretty outstanding way with the Millarworld contest?

Really, first and foremost, make sure that you’re in love with the work, not with the product of the work. Comics is time consuming, it will take your days from you without saying sorry or thank you. Take it from someone who had a time consuming career he was proud of but didn’t enjoy granularly: don’t do that. It will burn you out, it will eat you from the inside out. There are less time consuming jobs that will pay you a living wage and still give you the opportunity to pursue your passions and hobbies.

Put your stuff online. Consider that your job is to get as many eyes on your work as possible, not to make money off of it, at the early stages.

Go to cons. Meet your fellow creators whenever you can. Be cool. I can’t stress this one enough: BE COOL. Be kind. Be one of the good ones. 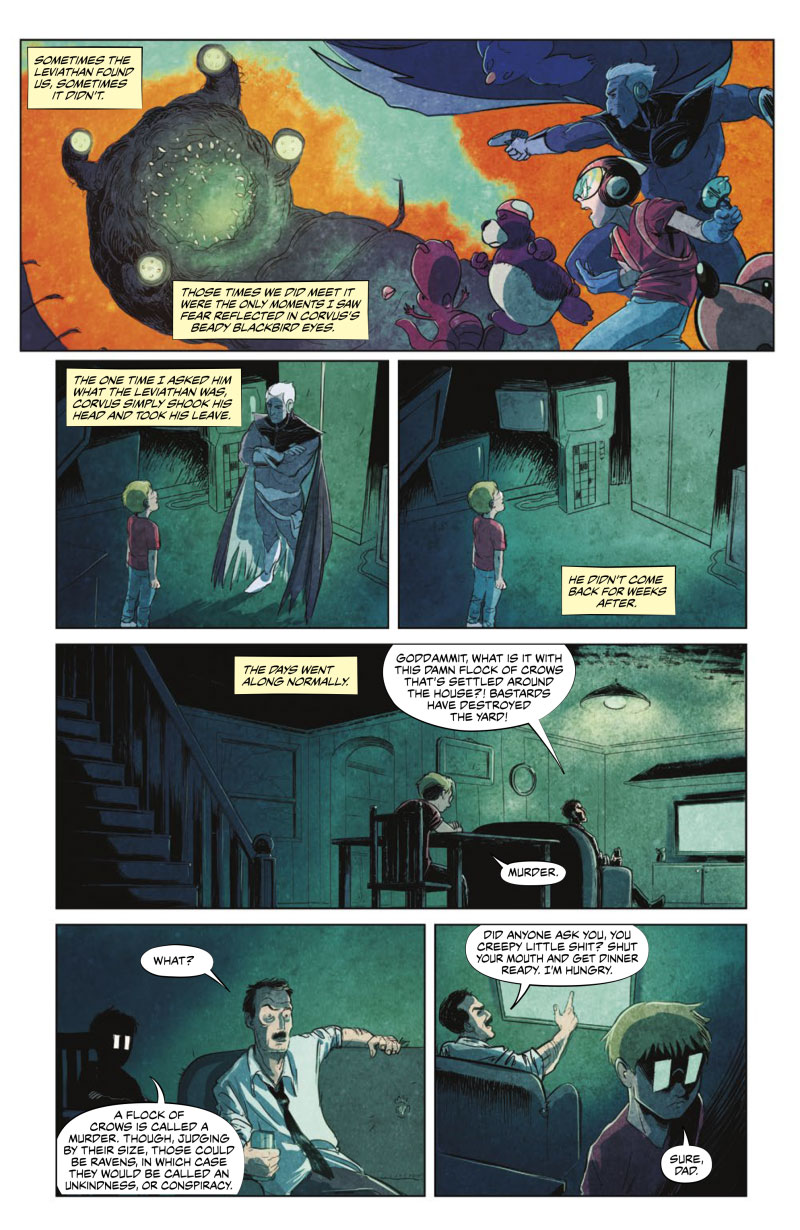 Remember that there is no one path, and no one process. We all work differently, and try to stay positive about your own stuff while being frank about your shortcomings, especially when they’re pointed out to you by trusted editors, friends, creators, family members, and benign cosmic deities who come to you in your slumber. (Shout out to Xexuuu the Forever-Facing God for all his feedback. Couldn’t have done it without you, buddy).

MS: Any final thoughts or special teases to share for the debut of Maxwell’s Demons on Wednesday from Vault Comics?

DC: Stories rarely surprise. I promise you, every issue of Maxwell’s will surprise — and maybe shock — you. It’s like nothing you’ve ever read, and I hope you’ll give us a chance to take you to far off places and deep, deep spaces.

Make sure you don’t miss the debut of Maxwell’s Demons from Vault Comics tomorrow!