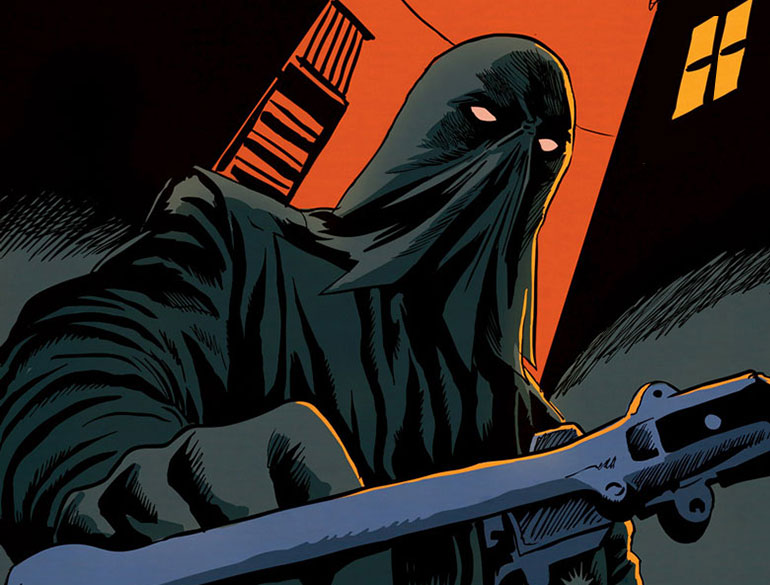 The Black Hood is BACK next Wednesday. After a brief sojourn to rehab in Los Angeles, the man under the mask is ready to get back to business in Philadelphia, and to help him on his way is series writer Duane Swierczynski. But the Hood isn’t the only Red Circle character making his return to the page, as a brand new iteration of the Crusaders is on its way as well. Swierczynski shares a little insight as to how much darker it can get for Greg under that hood, why the setting is so important, and where things will be going with Jessie when the series resumes. 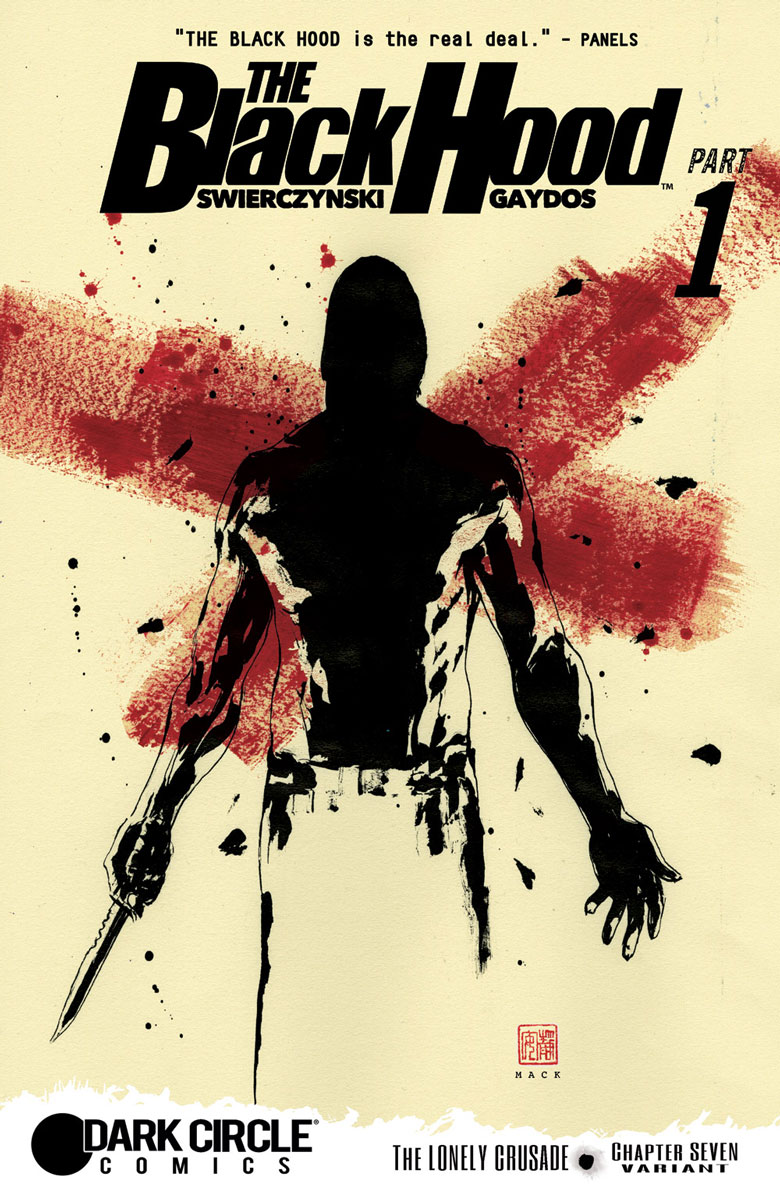 Matt Santori: Duane, thanks so much for taking time out to chat about the second arc of The Black Hood.

Looking back at the first arc, is there anything that surprised you by the end or that you hadn’t predicted when you started writing #1?

Duane Swierczynski: Truthfully, we had the whole story of the arc pretty much mapped out before I started writing the first issue. But I have been surprised and delighted by the reaction to each issue. It’s seriously dark, noir-ish stuff, and I’m glad readers got into it the way they did. This encouraged us, of course, to go even darker with the next arc. Heh heh heh.

MSG: Something that became really clear for me in the transition from #5 to #6 is that it feels in some ways that the real main character of The Black Hood is Philadelphia. How does the setting factor into the story you’re starting in issue #7?

DS: So glad you noticed that — because that’s how I think about it, too. And you’re going to see a lot more Philly world-building in this next arc. I want to show the good and bad in my hometown, as well as some of its recent (heartbreaking) history. 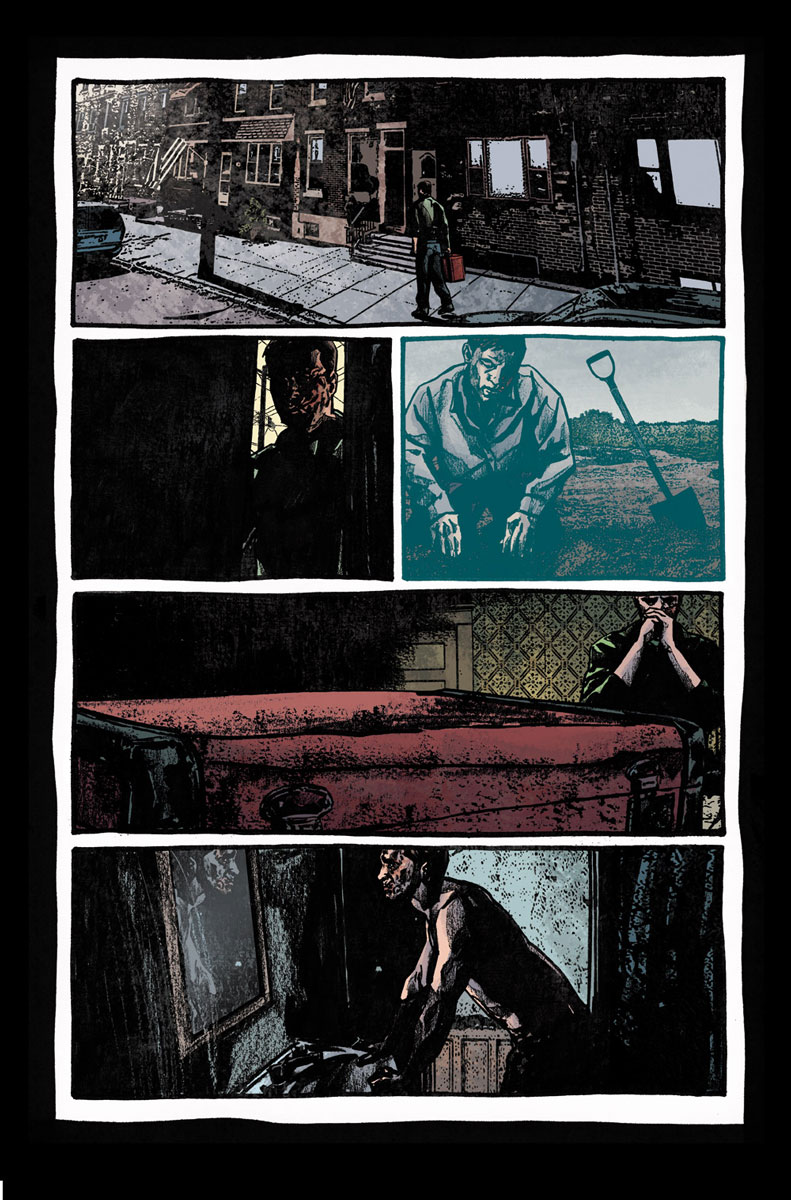 MSG: The Crusaders is a huge concept for the original Red Circle line and now feature in your new storyline. How did you go about transforming them and what part of the original thinking, if any, factored in?

DS: They’re not like any previous incarnation of the Crusaders. In fact, I gave them that name just to be cheeky (and see if my editor, Alex Segura, would try to stop me). And then it kind of stuck. That said, you might consider them a funhouse mirror version of a superhero team—the embodiment of some of our nation’s worst impulses and prejudices.

MSG: Greg’s addiction to drugs was so much a part of getting him into the hood, and at least the inciting incident behind his adventure on the West Coast. Will addiction continue to be a factor in his life and where is his head at when we return?

DS: It most certainly will. Addicts aren’t cured; the struggle goes on forever. And I want to treat Greg’s addiction as realistically as possible. As far as Greg’s headspace… at the beginning of chapter seven, he’s feeling a lot better about things. He thinks he’s turned a corner. And he has. But little does he know there’s something even worse waiting for him around the block… 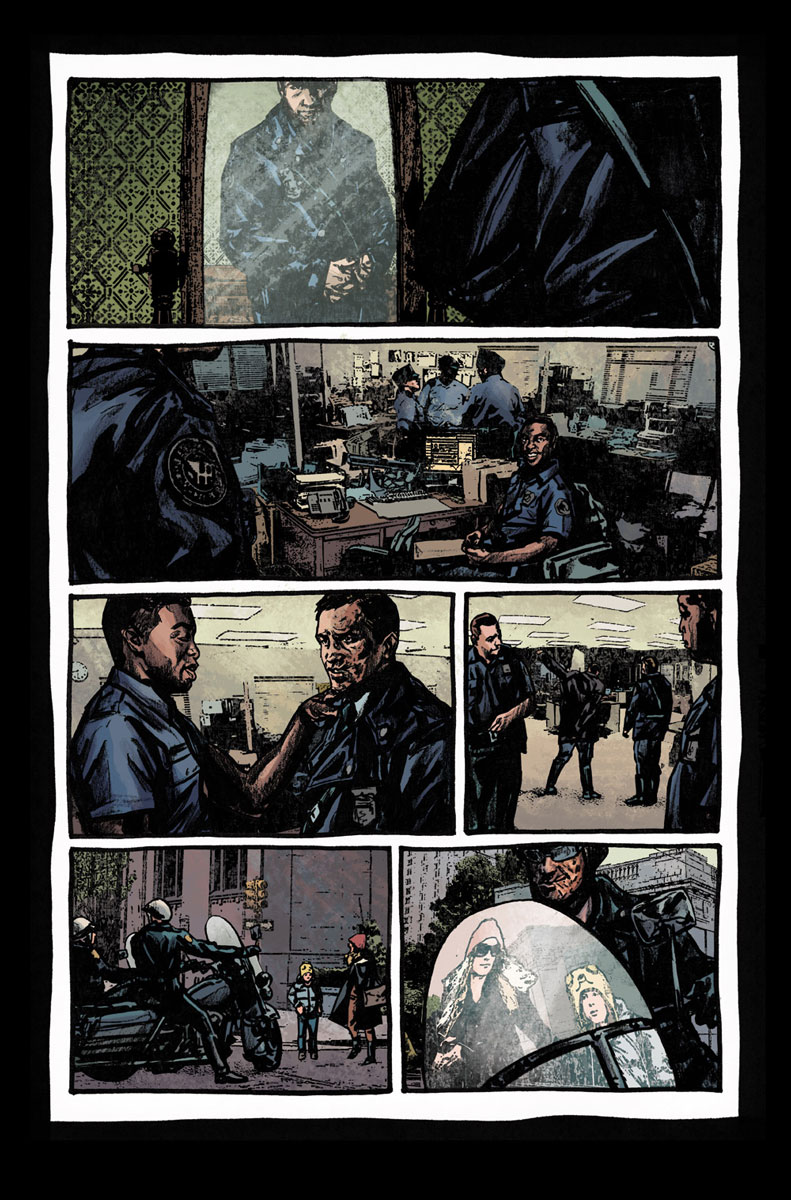 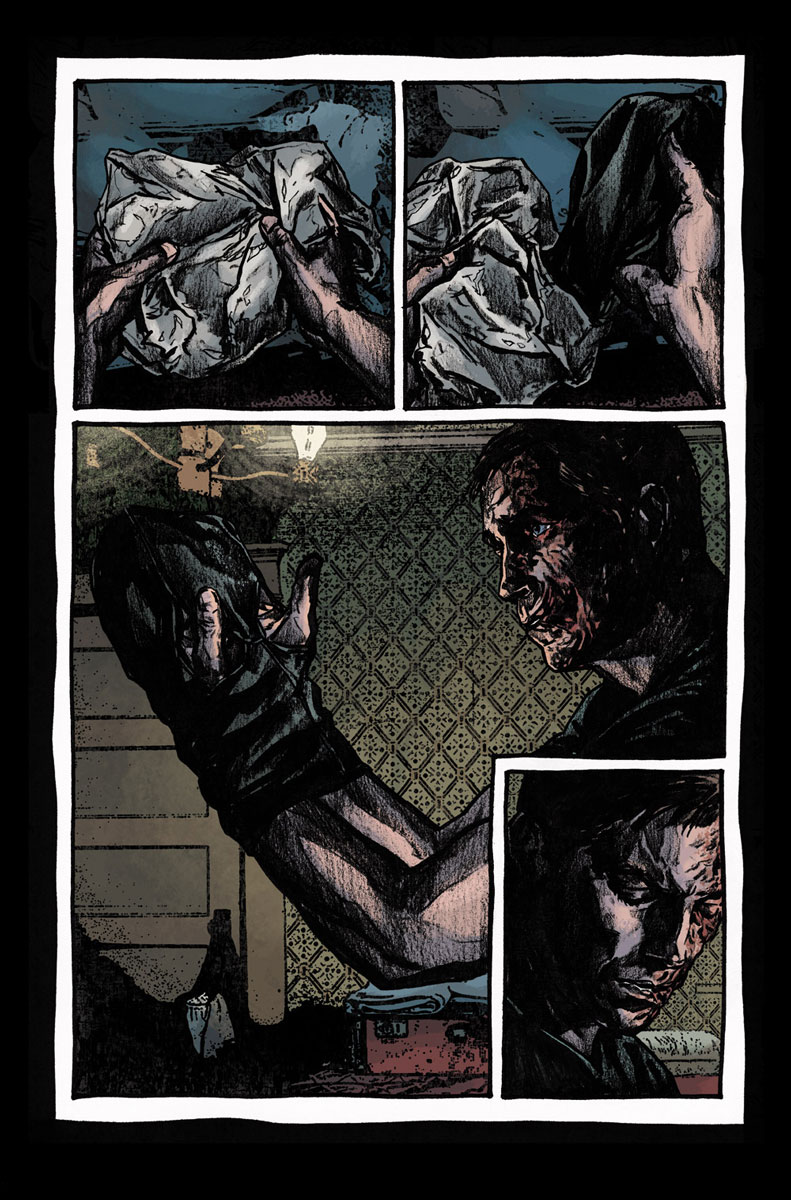 MSG: We also continue to see Greg’s relationship with Jessie continue. Is it strictly platonic, is romance a factor, or will we see the relationship progress in any other way?

DS: Greg and Jessie definitely have a slow burn thing happening. Platonic for now… though I’m sure they both could imagine it going somewhere. But for now, there’s a literal and psychological barrier between them. (You ever try making out with someone wearing a fabric hood? Not very romantic.) 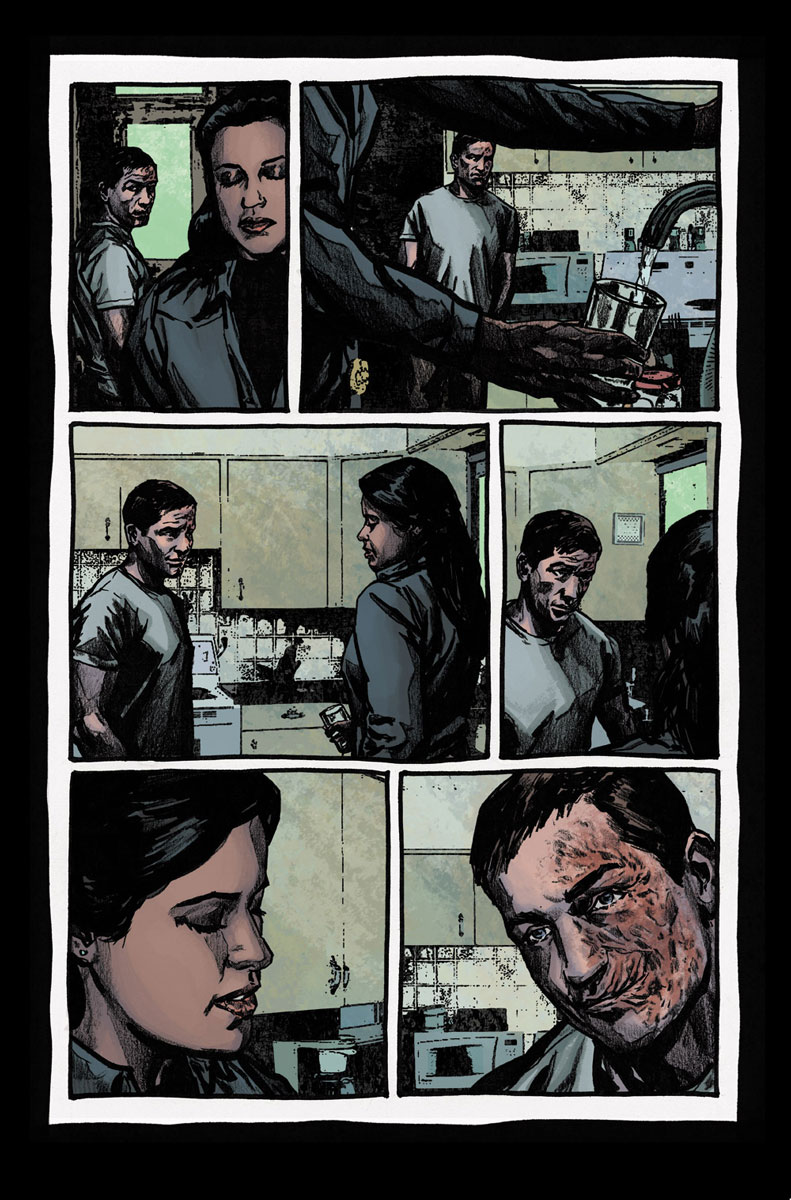 MSG: Michael Gaydos is back with issue #7 after a brief break. What are you excited to see him bring to the new issue and issues to come?

DS: I was very excited to see what Gaydos would do with the Crusaders, and man, he did not disappoint. And the opening sequence of chapter seven feels like a horror movie…

MSG: Any final thoughts or special teases for the next arc of The Black Hood?

DS: I think readers will be genuinely surprised by what happens by the end of this arc. I’ve always thought of The Black Hood as a crime novel in comic form, and we’re about to enter some extremely harrowing territory. Especially with the reveal of a seed planted all of the way back in the first chapter… 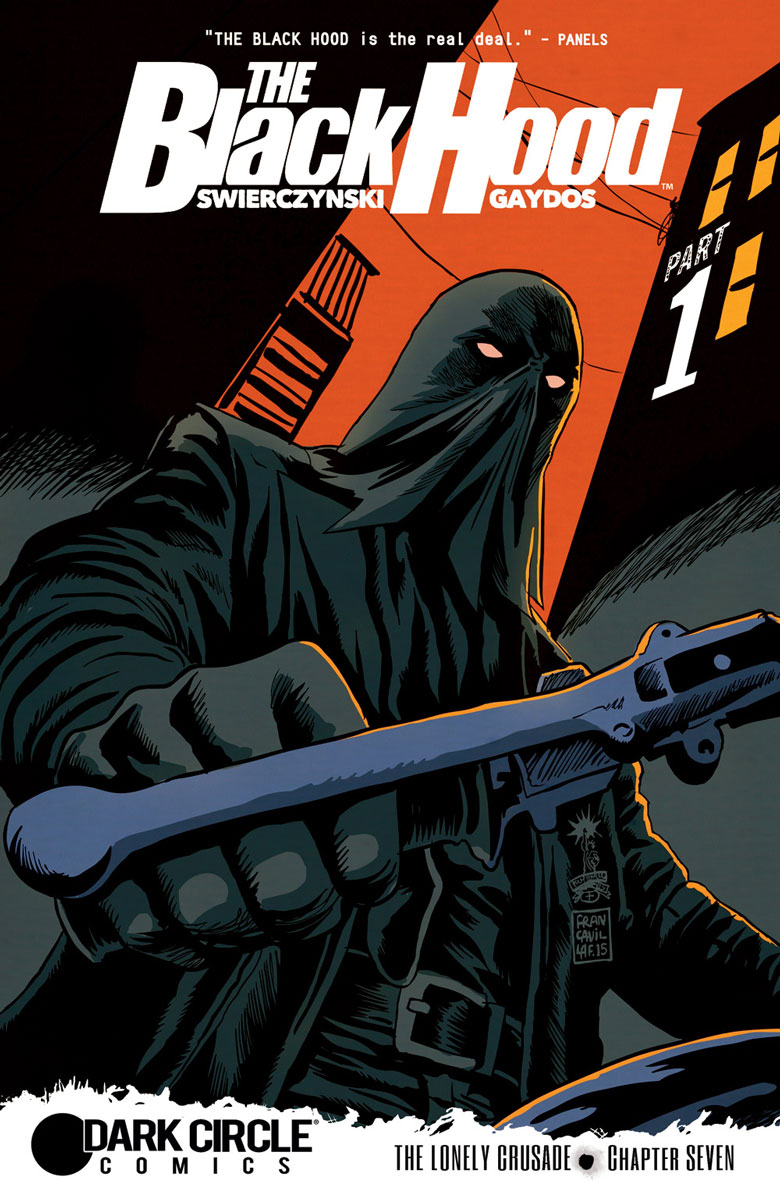 “The Lonely Crusade, Part 1” Greg Hettinger returns to Philadelphia and promises his closest friend, Jessie Dupree, that his hood-wearing vigilante days are over. But it’s a promise he’s going to struggle to keep—especially when a gang calling themselves “The Crusaders” are prowling the City of Brotherly Love, scooping up “undesirables” and asking if they want to be saved…    The second action-packed arc of The Black Hood begins here!