What would you pay to bring a loved one back? If your pockets are deep enough, Reconnect can help in Ed Brisson’s Comeback from Image Comics. Comeback is a different take on time travel and the industry that can be associated with it, and Brisson was kind enough to take time to discuss how the series came to be and what fans can expect from it.

Aaron Long: Can you discuss how Comeback came to be? How did the title end up at Image? 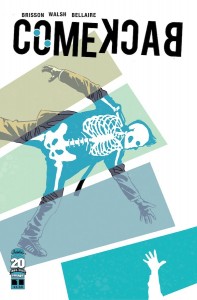 Ed Brisson: It was an idea I came up last year while thinking about time travel and how criminals might use it — outside of the obvious going back in time and playing lotto or sports betting. I wanted to time travel to be limited so that I could essentially box in my characters and make them be a little more inventive with how they used it.

I ended up writing an eight page backgrounder on how time travel would work, what limitations would be placed on it, how it could be monitored and how an operation such as Reconnect would operate. From there, the story started to formulate and come into focus.

While I was working on it, Michael and I were already hard at work on another pitch — I’ll get to that one later — and I’d told him the rough outline for Comeback. He really liked it, so I developed it further as something we could pitch if the pitch we had in the works didn’t get picked up.

As for how it ended up at Shadowline/Image… That was just the first place that we pitched it to. Jim (Valentino) liked it and here we are!

AL: The first issue was one of the more unique concepts I’ve read in comics this year. Straight from the creator’s mouth, how would you describe Comeback?

In short, it’s a crime book involving time travelers. In not-as-short, it’s about an agency called Reconnect. For an enormous fee, they can go into the past (67 days max!) and rescue a deceased love one. They fake that persons’ death so that it appears they’ve still passed away and then bring that person back to the present to be reunited with their family where they’re then all whisked away to live a witness protection style of life — no connection with the past or other people they know (time travel is illegal, so you don’t want anyone to know that your deceased wife has been saved).

There’s more going on than what you initially see though. Reconnect is not as altruistic as they might initially appear.

AL: Can you discuss Mark and Seth, and what they are striving for in Comeback?

EB: Mark is just trying to do good. Although time travel is illegal, he believes that what he’s doing is worth the risk. He’s reuniting families. What could be wrong with that? Mark believes in the mission, despite the legalities.

Seth, on the other hand, has started to see more of the organization and is more suspect. He’s broken and tired and ready to leave the organization — after one last job (never a good sign!). 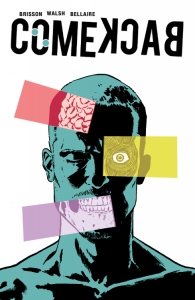 AL: How did Michael Walsh and Jordie Bellaire get involved with the project?

EB: Michael and I connected a couple years back now. He’d initially hired me to letter a pitch he was working on. I really dug his art and asked if he’d be interested in working on a Murder Book story. He dug Murder Book, so agreed. Since then, we’ve talked almost daily and have been slowly plotting our take over of comics. Comeback was the second pitch that we did together — the first was a crime story, essentially a 5 issue Murder Book, that we got a lot of positive feedback from. Ultimately, we were told that crime wouldn’t sell, so we decided to try something else.

While we were putting Comeback together, Michael and I were on the hunt for a solid colorist. I’m not 100% sure where I first saw Jordie’s work, but it was the stuff that she did on the Planet of the Apes series through BOOM! that made me think she’d be perfect for the book. I showed the stuff to Michael and he agreed. I shot Jordie an email to see if she’d be interested in working on our book, fully expecting that she’d decline, but she liked the project and has since become an integral part of the team.

AL: The first issue sets up a very complex situation for the characters involved. To keep everything sorted out over the five issues, did you plot them all first and then iron out the finer points and story beats?

EB: I had a loose outline for the entire series and dove in with that. As I started writing, some of the characters started to move to the forefront a lot more, so I ended up re-outlining the whole thing to give these characters more time in the spotlight. The motivations of each character have primarily remained the same, but they’ve definitely become larger characters.

As for the stuff that happens, it changed somewhat when I dove in, but is still primarily what I’d planned. There’s an event that happens within the book that wasn’t initially planned, but when it popped into my head as a solution to one of the story problems I was having, I had to include it. It both fit the story and is just plain amazing (or, I think so at least!).

AL: Any final words for Comicosity’s readers regarding Comeback?

EB: Just want to thank everyone who’s taken the chance on the title. I think that you’ll be pleasantly surprised! Everything is NOT AS IT SEEMS!

Also, if you need one more incentive to buy the book, know that the day it hits shops (November 21st) is also Michael Walsh’s birthday!