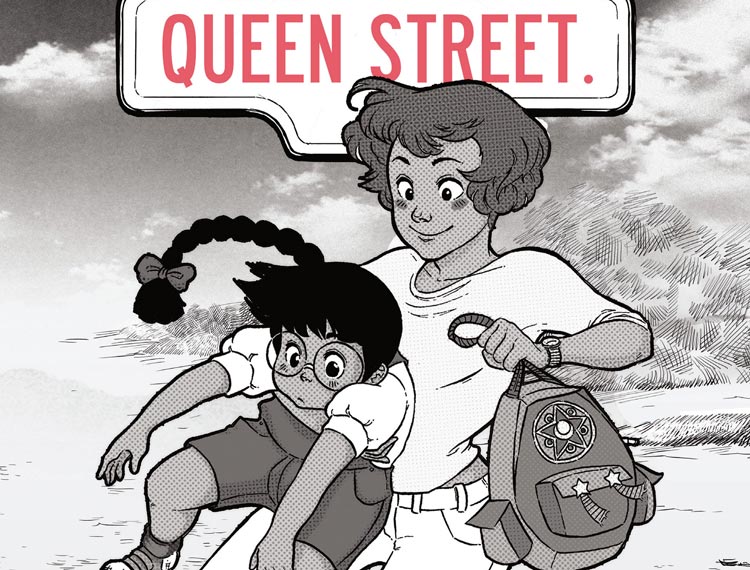 Chapterhouse Books is starting to make a name for itself as the premier Canadian comic book publisher with books like Freelance and Captain Canuck, but they’re not stopping at monthly comics. Coming out this fall is an original graphic novel from writer/artist Emmanuelle Chateauneuf, Queen Street. Chateauneuf sat down with Comicosity to chat about the development of the book, her background, and her influences as an artist.

Kelly Richards: Thank you for talking to us today about Queen Street, Emmanuelle. Would you mind introducing yourself to our readers and sharing a little bit about your background?

Emmanuelle Chateauneuf: I’m a proud Filippino-French Canadian, originally from the very strange, yet charming, town of Sault Ste. Marie ON, and now live in the equally strange and charming city of Hamilton ON, with my cat, Micchiru.

Before I was born, my dad owned a comic book store, so the house was always filled with comics, books, and movies. My godfather, who was like a second father to me, is also big into academia, so I was never really at a loss for education or entertainment growing up… 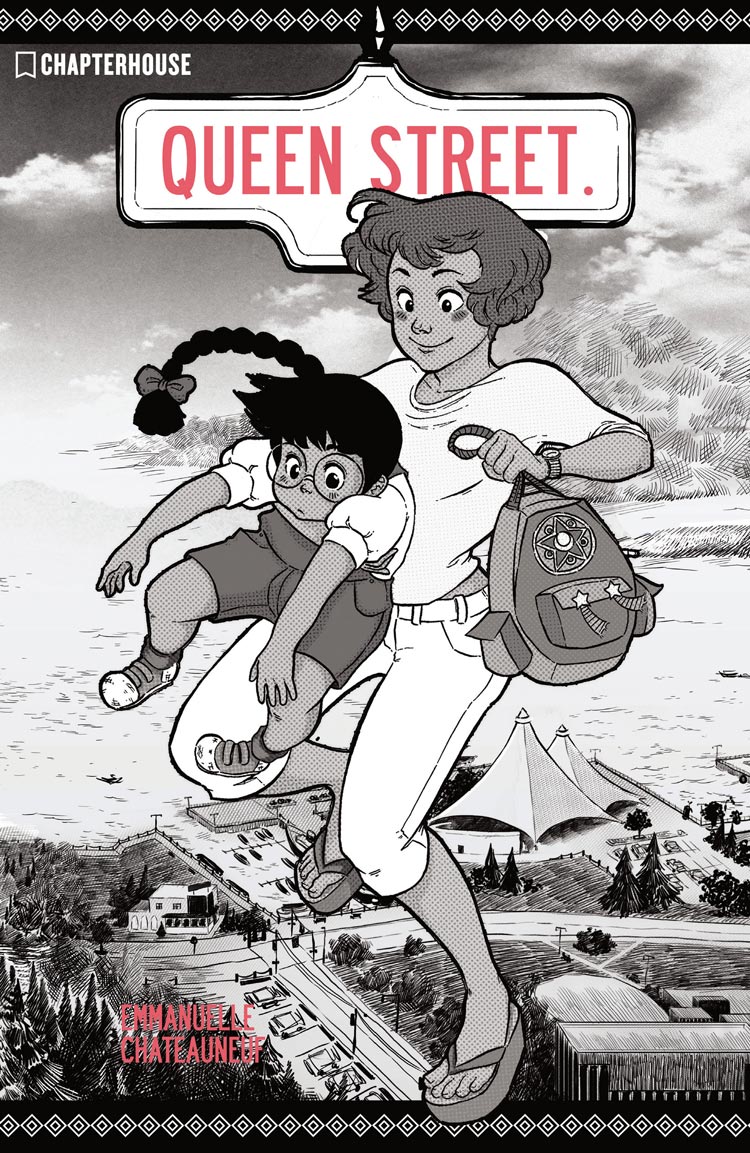 I danced competitively at a ballet academy full-time from when I was three until I was seventeen, alongside school and other extracurriculars, and started storytelling as my own private way of expression and escape from life. From there, I kept making comics compulsively right into university, where I dropped out because of health issues, and then somehow magically found myself tumbling into circumstances where I could actually make a living out of them.

I guess I just never really saw comics as something I could do professionally. For years, I’d talk myself up saying I would, but very honestly half-heartedly. So it’s like some wonder-filled dream. But yeah, generally I’m just another person who grew up deeply in love with heroic myths and artistic expression.

KR: For anyone not yet in the know, could you tell us a little bit about how Queen Street came to be and what it’s all about?

EC: Queen Street was a happy accident to be perfectly honest. It’s the product of what started out as a ten page exercise in simple comic storytelling with my mentor and friend, Ramon, and then turned into a full-scale book. I don’t have very good self-control when it comes to creating!

But to answer you question, simply, it’s a twelve-hour comedy/drama about an immigrant mother, her eccentric daughter, and their colourful extended family just trying to get through a single day of life as lower-class minority citizens here in Canada, today.

More analytical, it’s a deconstruction of the American Dream, so, the hero’s adventure after the fairy tale. Because life keeps going, right? There is no ’end’, except death, and even then it isn’t an end. Everyone else is still alive, and the story keeps going regardless of expectations. I guess it’s a love letter to life and being alive. 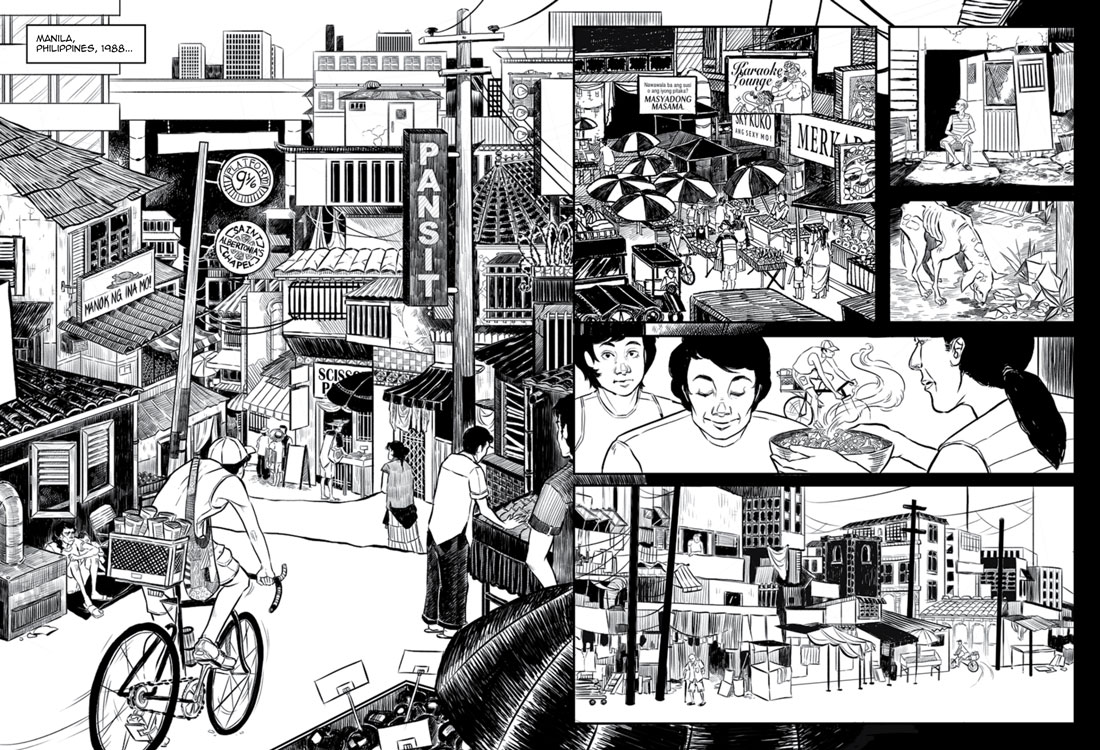 KR: The graphic novel is really beautiful and so emotional. I definitely had a little cry while I was reading. What made you decide to tell this particular story?

EC: Thank you, genuinely, so much.

It’s interesting hearing that, you know? You aren’t the first person to tell me that you cried, or that the book moved you deeply. I find interactions like that with books, music, and film profound — but not in a way where I take credit for those feelings! It blows my mind that the novel itself, now apart from me, is able to do these things on its own interacting with people.

Like, I’ve been absorbing media that’s moved me all my life, and now I get to see firsthand from the opposite perspective how my very own creations are affecting others. It’s inspiring! And special!

Especially considering, and to answer your question, that I don’t feel I chose to make Queen Street. It chose me. There’s this saying where parents don’t get to choose their children, their children choose them, and for reasons that are still becoming known to me, my first baby, Queen Street, chose me. The conception process came naturally with time as little by little I wrote what I needed to write. It’s hard to explain, but the book told me what it wanted, and I kinda just listened as best I could.

If I were to say though why I personally think I wrote Queen Street, however subconsciously and all that other stuff aside, is because I needed it. I needed to come to terms with my life and everything that had happened to me up to that point, and what that meant to the world at large.

For example, writing Queen Street, I never realized people were racist towards me. It sounds real stupid, but I seriously never got that. I remember showing the comic to my roommate the at the time, and being so convinced that I was bullied only for being poor and nerdy, and her just looking at me with so much sympathy.

I still didn’t understand it for about another year or so after, until Trump was elected as President in the US. I called every single one of my friends screaming, “I JUST REALIZED! I’M A MINORITY?! I’M A ‘PERSON OF COLOUR’?! AND A ‘WOMAN’?!” True story! It’s genuinely and hilariously screwed up that for the first two decades of my life, I couldn’t comprehend racism towards mixed-race people, or Asians in Canada.

Or even the true invasive nature of sexism really. No one talked about it, especially in the Soo. I didn’t get that people treated me differently because of how I looked. I just assumed that our personalities didn’t mesh, and kept going.

So yeah, I needed to check myself, and Queen Street did that for me. By telling this story I was able to finally appreciate me, good and bad, my life here in Canada, and the lives and perspectives of everyone I’ve ever known. That was hard. There’s a lot of monumental change happening in the world right now that has the potential to be astounding for generations to come if confronted today. 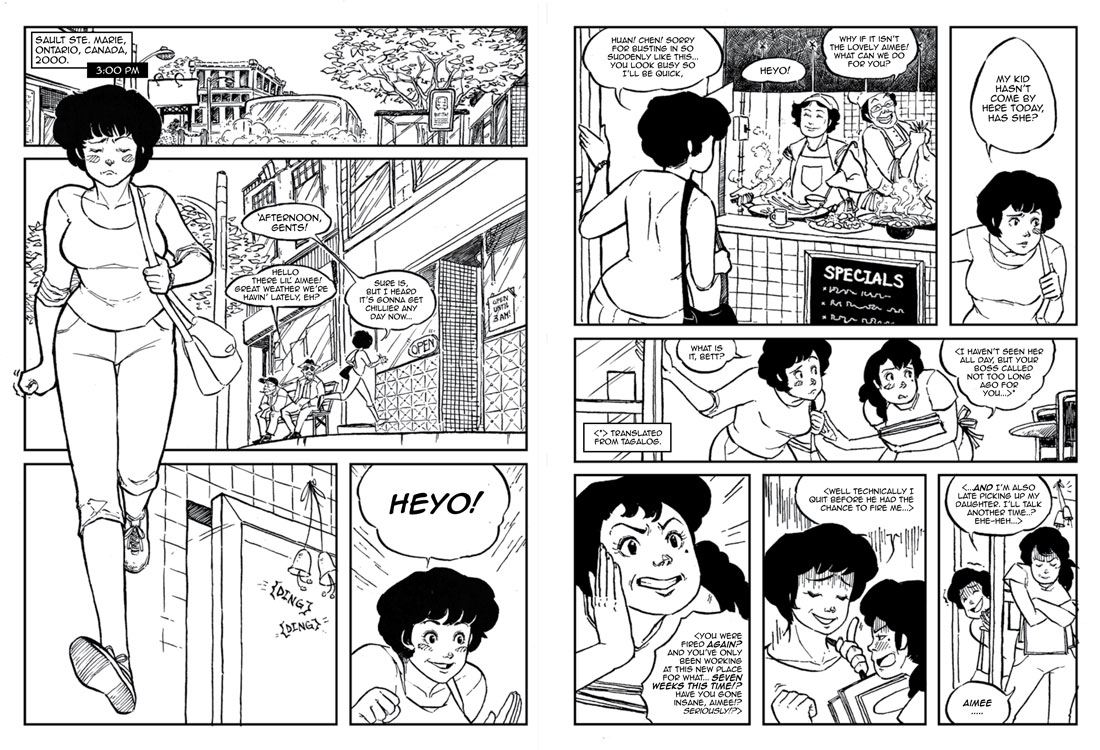 KR: For me, more than a few panels brought to mind Studio Ghibli movies. What or who would you say are your main artistic influences?

EC: Yes! Hiyao Miyazaki & Rumiko Takahashi! They’re my father and mother in illustration, writing, self-expression, and creation. Which is kinda funny when you think about it, because Miyazaki, male, prefers to write about female protagonists, and Takahasi, female, prefers to write about male protagonists and they both do it so naturally and genuinely, and goodness do they do it exactly.

Like, do you ever have those moments watching movies, or reading books, where you empathize so completely with the work it’s hard to tell the difference between your own life, and the media you’re absorbing? That’s what they do for me, I guess.

Not only did the physical look and nature of their work inspire me, but the actual spirits of the pieces themselves. Like parents, they supported me through passion and love by being masters at capturing and conveying their human experience and then sharing it with me.

KR: Do you have plans to expand upon Queen Street? I really hope so!

EC: Thank you! I’ve been asked this a lot!

Well, if I did, it would probably be about my years as a teen when we finally did move to that glorious dream house and things really hit the fan. It would also be called ‘Hardwood Street’ because I shit you not, that is the name of the street my parents live on. It was also when men finally began affecting me and my worldview, not great times. Those were probably some of the hardest years of my life.

But yeah, I’ve played with the idea. I’m just not ready to spend a year drawing that yet. If it happens, it’ll happen because it was meant to. 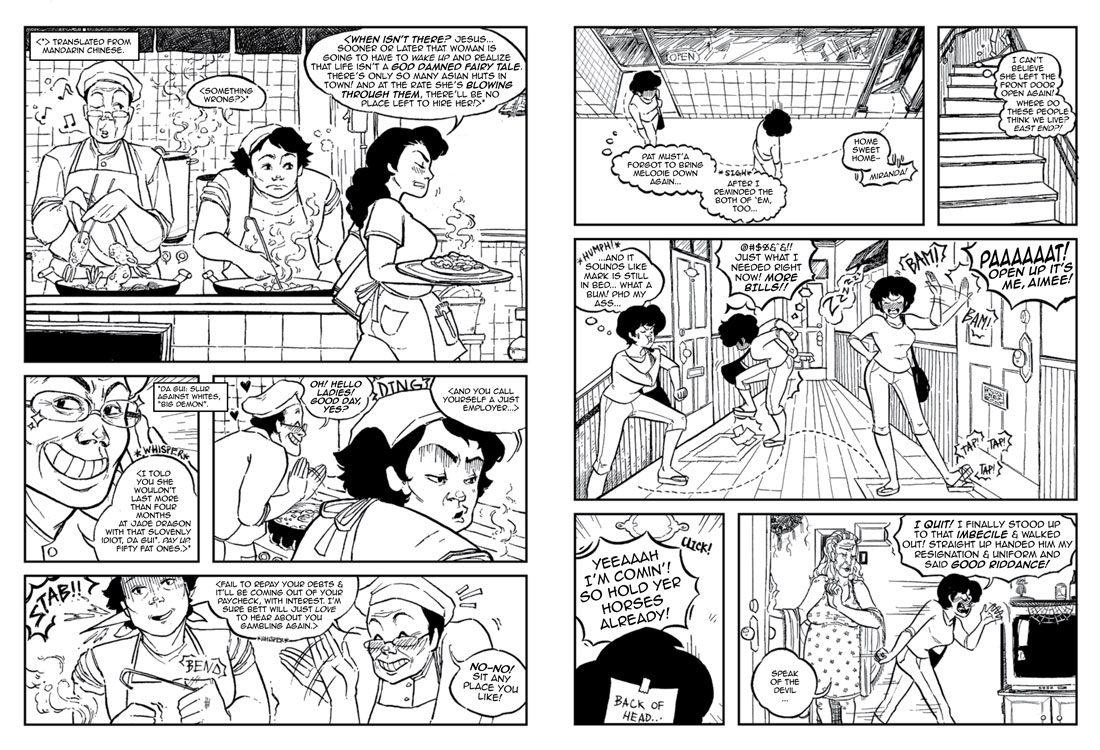 KR: Do you having anything else coming up we should be keeping an eye open for?

EC: I do! And oh, I’m so excited! I’m working on my second original novel, Saint Anthony’s School For Misplaced Children, which is a Dantean comedy/drama about the nature of love in all its forms.

And finally, there’s some exciting comics brewing in the dark and mysterious labs of Chapterhouse, that I’ll be co-writing and illustrating alongside Jay Baruchel. All three will be making their debut in 2018!