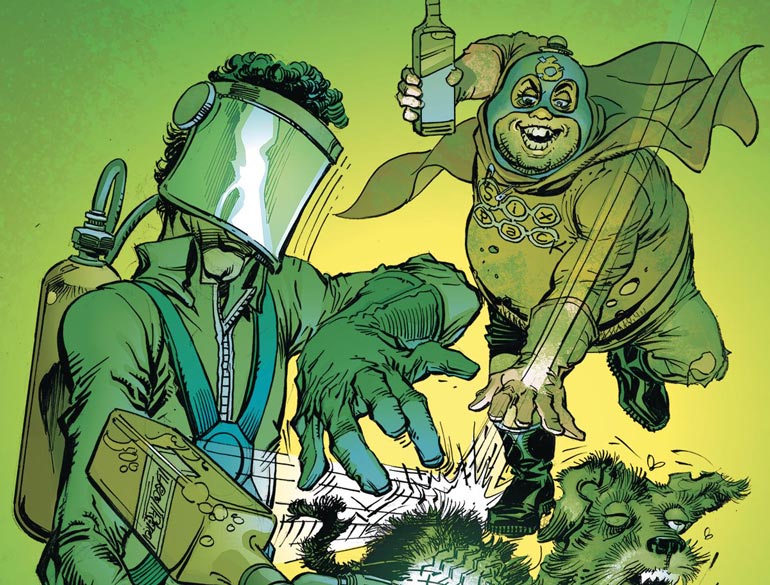 When we talked to Garth Ennis last year about returning to some of the heroes he made popular through his time on Hitman, who knew we’d be getting even more in 2016? But this week sees the launch of Sixpack and Dogwelder #1 — an EVEN MORE unpredictable title from DC Comics than All-Star Section Eight was. Ennis and new artist Russell Braun stopped in to share a few thoughts about the new six-issue mini and how critical Dogwelder’s origin is to the series as a whole.

Keith Callbeck: Following up the return of Section Eight last year, you are focusing on two particular characters from the team. Why did you choose Sixpack and Dogwelder for this spotlight?

Garth Ennis: They seemed the obvious choice — Sixpack is team leader and Dogwelder is far and away the most charismatic.

The other Section Eighters don’t work as well, although Baytor’s origins do play an important role in part two. Guts is just a pile of offal, and I prefer not to focus on Bueno Excelente (or even think about him) more than I absolutely have to. 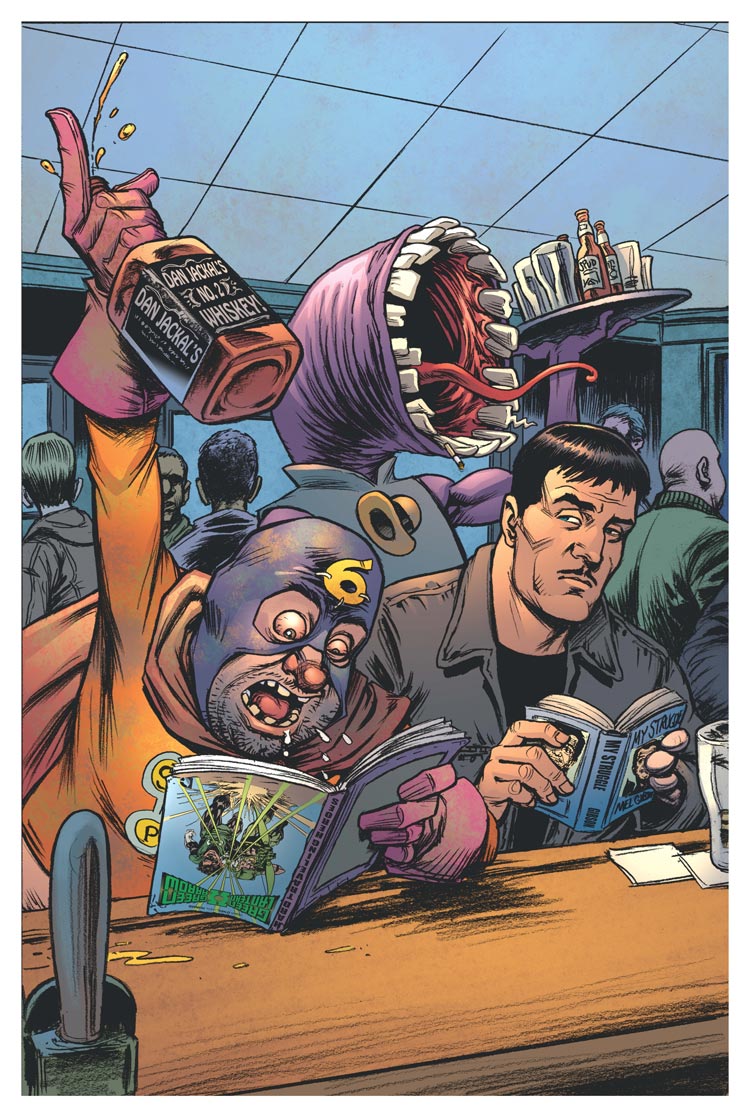 KC: Does Sixpack & Dogwelder pick up directly after All Star Section Eight, or has time passed? What do fans need to know to jump on board?

GE: Some time has passed, and Sixpack is reviewing some of the team’s recent activities. He’s not impressed by their performance, which is why he wants to shake things up a bit.

KC: Russ, you’re taking over art duties on this story from John McCrea in the previous mini (as well as the classic Hitman series). What are your thoughts on the characters and the world you’re jumping into?

Russell Braun: The world and characters of Section Eight exist in a kind of soft white underbelly of the DCU, so it’s incredibly good, subversive fun to draw.

There’s a certain standard of insanity and absurdity John has established that I’m not so much trying to match in style as in enthusiasm. I’m playing it pretty straight, but every time I draw Sixpack I get a laugh and feel like I’m paying homage to guys like Joe Orlando, Wally Wood, and Jack Davis. 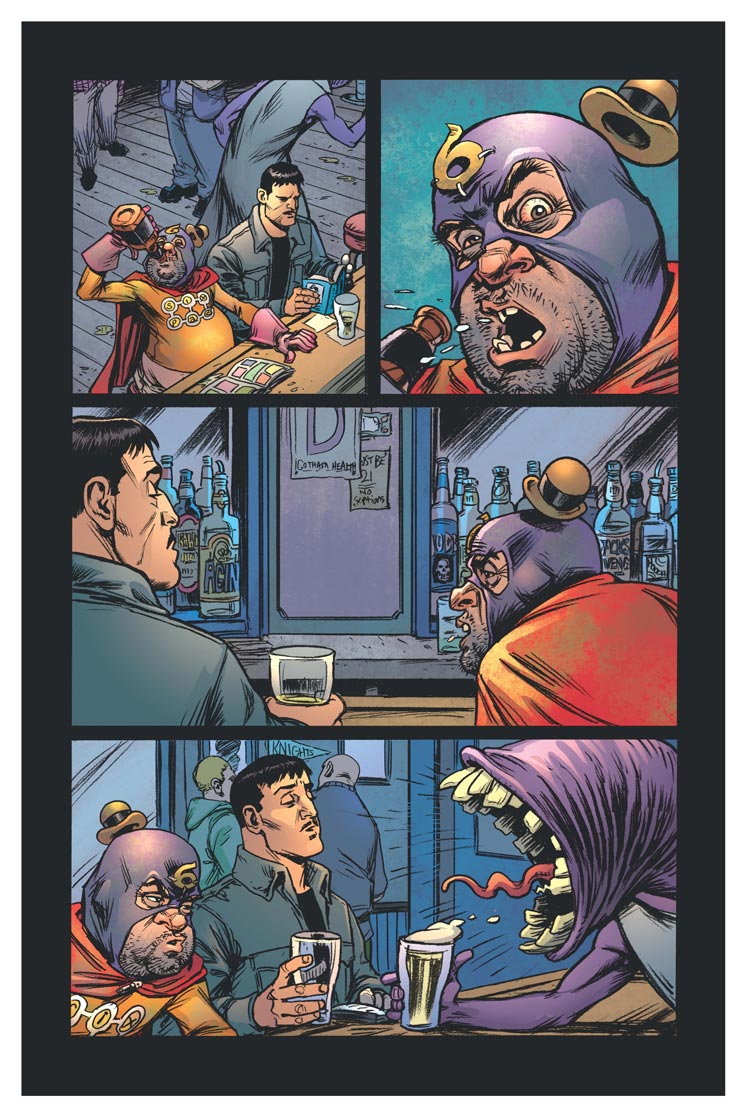 KC: In the classic Green Lantern/Green Arrow run that shares its name with this story, there was a strong political bent to the tales. Will we see the same from here?

GE: No, all we did was steal the title, largely because I find it so funny. But we do have a cover by Neal Adams, if that’s any use to you.

KC: Dogwelder has a mix of comedy and tragedy in his origin. How will that play into his place in the series and how does that tone impact the style of art for the book?

RB: Yeah, the stakes are pretty high for Dogwelder, so artistically I’m treating him pretty seriously — as seriously as you can treat a fella with a welder’s mask stuck to his face and dead dogs tucked in his belt. Because he has no face to speak of, all of his acting is done with his body language; until he finds another way to emote…

It’s a balancing act between belly laughs and some actual tears for our pal Dogwelder. 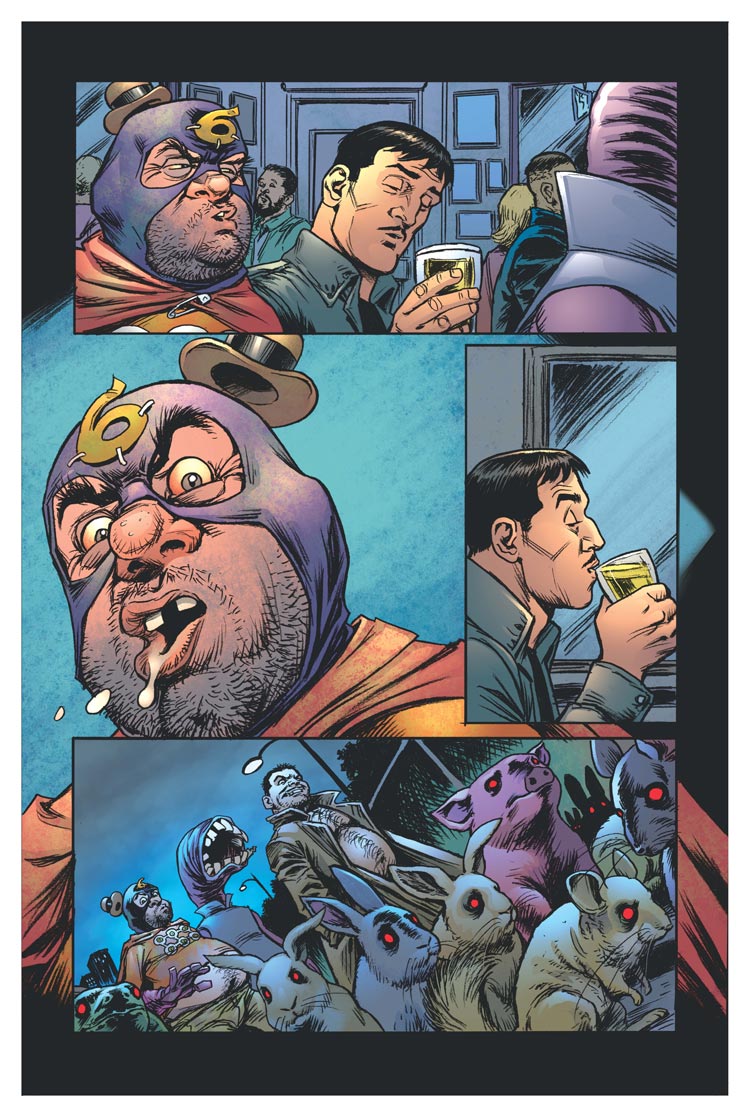 GE: Dogwelder’s origin is really the key to the whole thing. A certain chain-smoking sorcerer is going to take him on a journey of discovery, all the way back to his roots — ultimately revealing our hero’s purpose and place in the universe. Along the way, he just might solve Sixpack’s problem regarding Section Eight’s image.

KC: Will we see the other members of Section Eight play a role, and do you have any favorite appearances beside the lead characters?

GE: Very much so. Bueno and Guts actually end up in a sort of love triangle with a well known DCU personality, and Baytor finds one of DC’s heaviest hitters on his trail in part two. Both were a lot of fun to write.

KC: Will Sixpack ever get Section Eight back up to that full team compliment?

GE: I don’t think so, his attempts to do so came a bit of a cropper in the first series last year. And I’m sorry to say that this new series will reduce the team by one more. 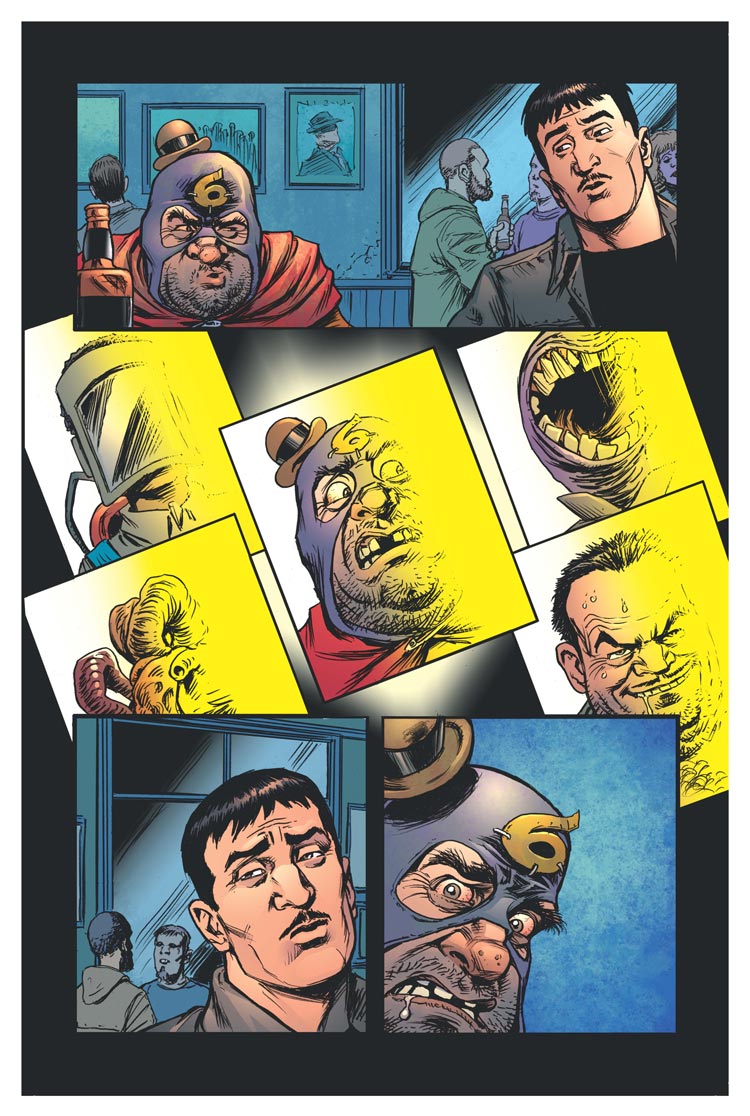 KC:  So, what’s next for the “heroes” of Section Eight?

GE: Not sure. I reckon if I was to do anything else with Section Eight, I’d like to focus on Baytor, who’s one of my all time favorite characters and whose origin story has yet to be told (or invented, to be honest with you).

I was delighted to be able to get his triumphant moment in The Demon released uncensored in the recent collection. It’s been available only in somewhat emasculated form for the last 22 years. All it cost me was a bottle of booze for DC’s collected editions chap, Scott Nybakken. Money well spent, as far as I’m concerned.