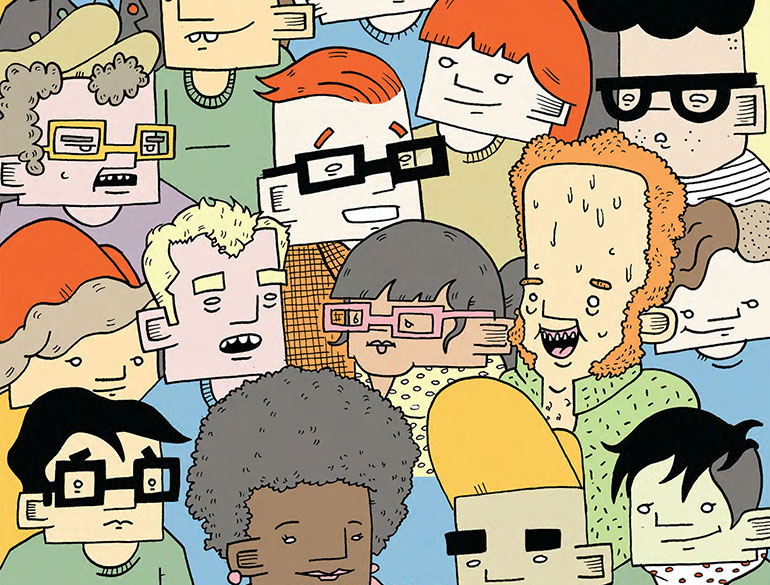 In the tradition of cartoon anthologies like Eightball and Optic Nerve, this December Top Shelf Productions introduces Gumballs, and new one-man comic anthology from Portland cartoonist Erin Nations. Taking a funny look at a variety of stories, including his own true-life story of gender transition, Nations brings his quirky humor and fascination with humanity to comics. Nations took some time to share his thoughts about the book’s arrival with Comicosity, including what a book like Gumballs can mean for both cis and trans readers. 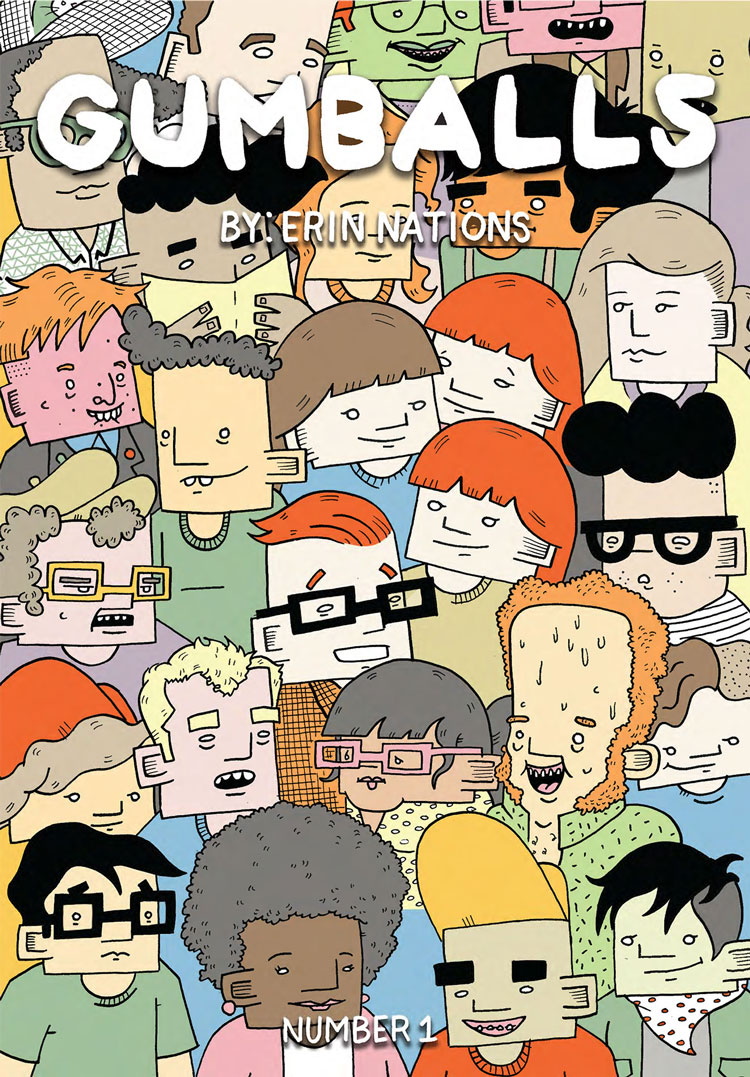 Matt Santori: Erin, congrats on the new title! Coming from a background in comic strips and illustrations, how are you approaching working on a sequential comic book for the first time?

Erin Nations: Thanks! I’m pretty excited about it. That was something Brett Warnock and I discussed before I started working on Gumballs. He has been a mentor of mine for a few years and he has played an instrumental role in helping me put together my first issue and advising me along the way.

Initially, I envisioned making a comic book in a more traditional style, following the standard format of 6.63″ x 10.24″, with panels on every page. It was Brett who suggested putting together a series that would include both comics, illustrations, and a variety of other themed work that I’ve already created or that is ongoing.

At first, I was apprehensive to deviate from an industry standard, but I trusted Brett’s vision and I think people are open to options that don’t necessarily conform to a traditional comic book format.

MSG: Where did the name Gumballs come from?

EN: It’s a little obscure, but it’s a reference to my work being referred to as “candy colored” like gumballs. To me, the word feels nostalgic and youthful, which is the same association I have with comics. Like a lot of people, my first exposure to comics was during childhood. 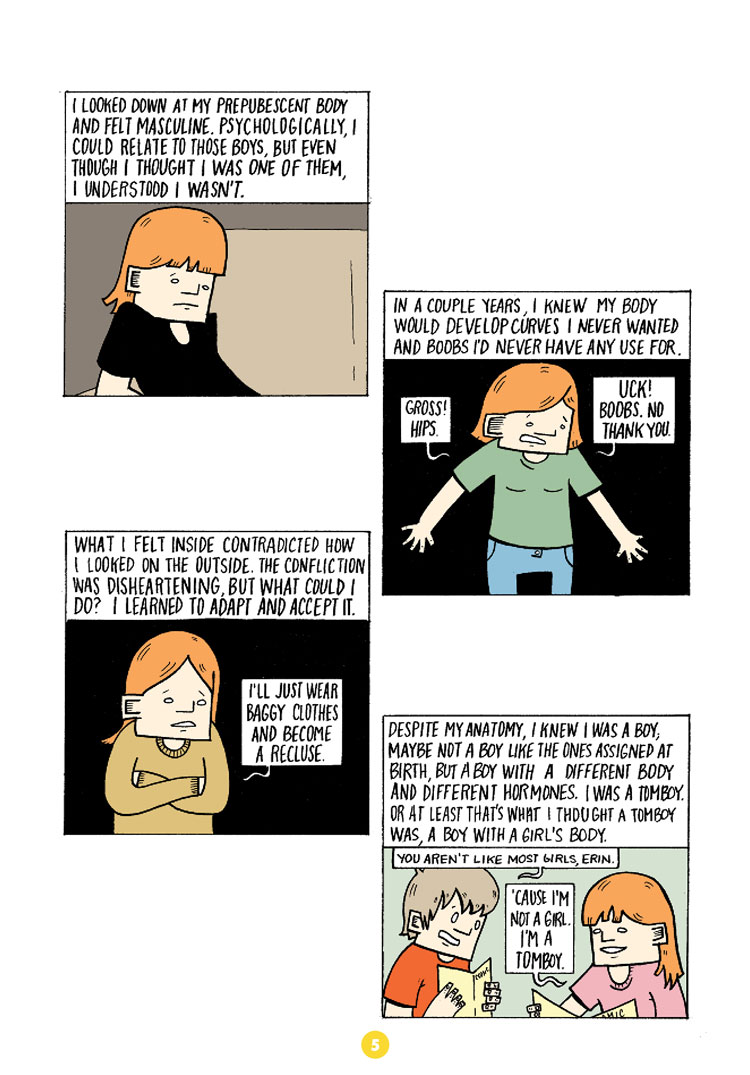 MSG: A number of the sequences in the book feature very personal, autobiographical stories about your coming out as trans and transitioning process. Talk to me about the impetus to document or share openly your experience.

It certainly wasn’t premeditated. When I was coming to terms with being trans, I spoke to a couple people I felt I could confined in, but I was too nervous to be completely honest with them about the extent of what I was going through.

As anyone who has ever been in the closet knows, it’s a burden. It’s depressing and isolating to not live authentically and be out and open about who you are. I was already making autobiographical comics, so as I accepted my gender identity, it was only natural to write comics about my experience as a trans person.

Making comics and sharing them on a public platform such as Tumblr was cathartic. I could be open on tumblr because not many of my family and friends use it. For me, it’s easier to be open with strangers than it is with people I know. I could handle a hateful remark from a troll (which has yet to happen). I couldn’t handle rejection from friends and family.

I also didn’t think anyone would really read my comics online, which is why I felt comfortable being vulnerable and exposing every detail of my transition. I was wrong about that. 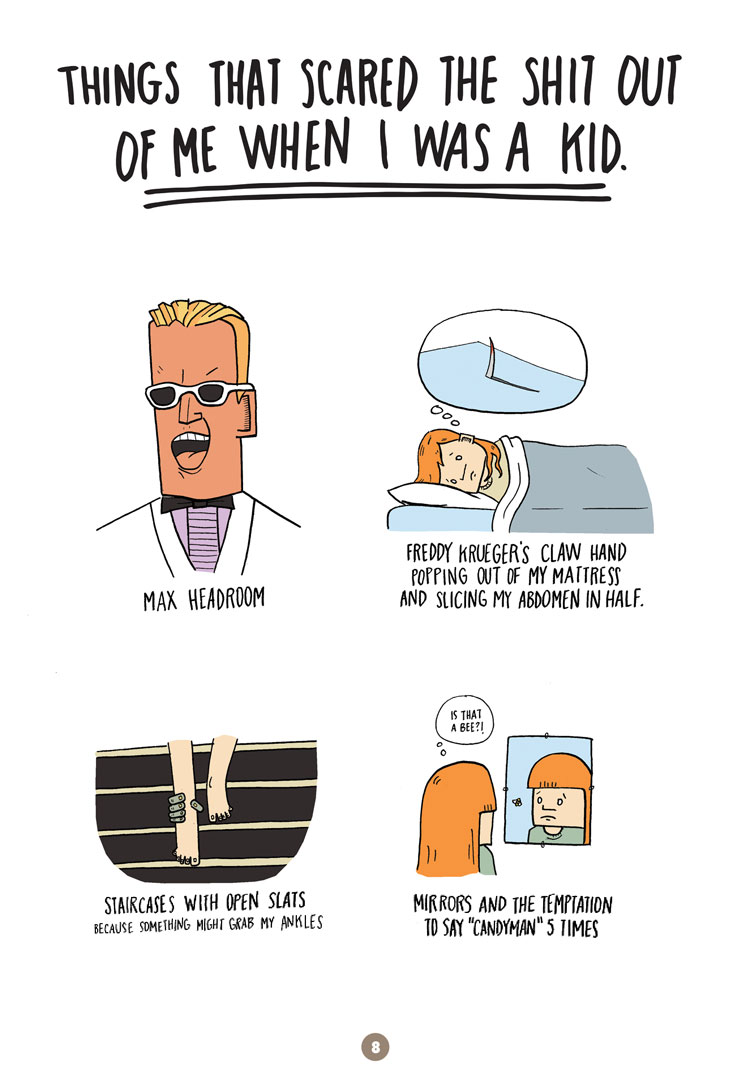 MSG: Without question, trans individuals, particularly in North America, are at the highest risk for violence, depression, self-hurt, and suicide. I think a book like Gumballs is an important addition to the landscape of comics — for trans and cis readers both. What are your initial thoughts on your previous or potential effect on the audience?

EN: I’m sort of naive and imagine the audience won’t have any qualms with reading a comic featuring trans or queer stories. My transition has been a positive experience and so far I’ve never been confronted with negative comments regarding my comics. Because the messages I receive are often favorable or supportive, I assume the audience will be accepting. I think trans and cis readers will either relate or learn something new from my comics.

A cis reader may not be able to relate to a comic about coming out as trans, but maybe they’ll be empathetic and understand the hesitation and fear that comes with revealing something deeply personal to another person. A comic about the effects of testosterone on someone assigned female at birth is educational to anyone (cis/trans) who is not informed. 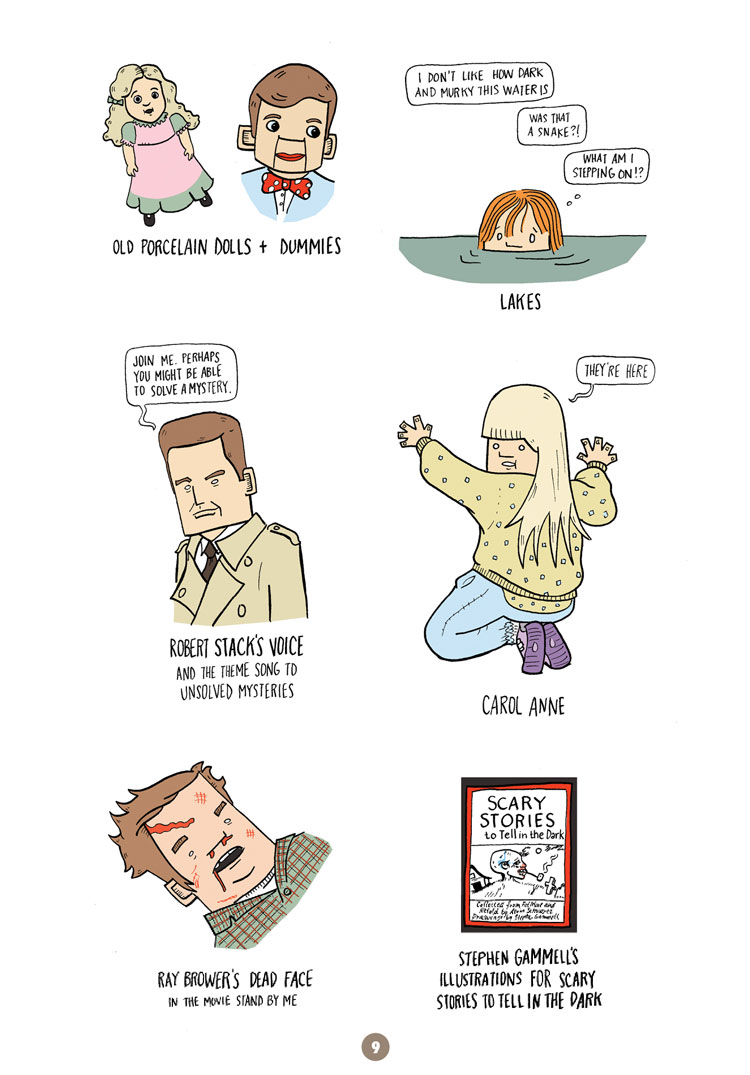 I think some of the trans readers will be able to relate and find comfort in reading a comic about a character they can identify with. They’ll enjoy reading something they can connect with. Maybe they won’t feel so alone.

MSG: You also introduce a cadre of other characters throughout the first issue that we’ll presumably follow throughout the series. Are they too based on people you know?

EN: Yes, I will showcase some of the same characters throughout the series, as well as introduce some new characters. Some of them are based on people I know or people I’ve met, especially in the autobiographical accounts I share.

For example, all the characters from “Pleasant People” are based on real people I’ve encountered. The characters that appear in my fictional comics are completely fabricated. There’s not much of an in-depth process that goes behind creating my characters. I’ve always been a shy person that sort of sits back and observes, so perhaps all those years of being a spectator of human behavior has unknowingly helped me form characters.

Humans are imperfect, so I invent characters that expose their insecurities and shortcomings. I don’t spend too much time developing their backstory. I simply give them a personality, a few quirks, and I do my best at drawing facial expressions and gestures that illustrate emotions. 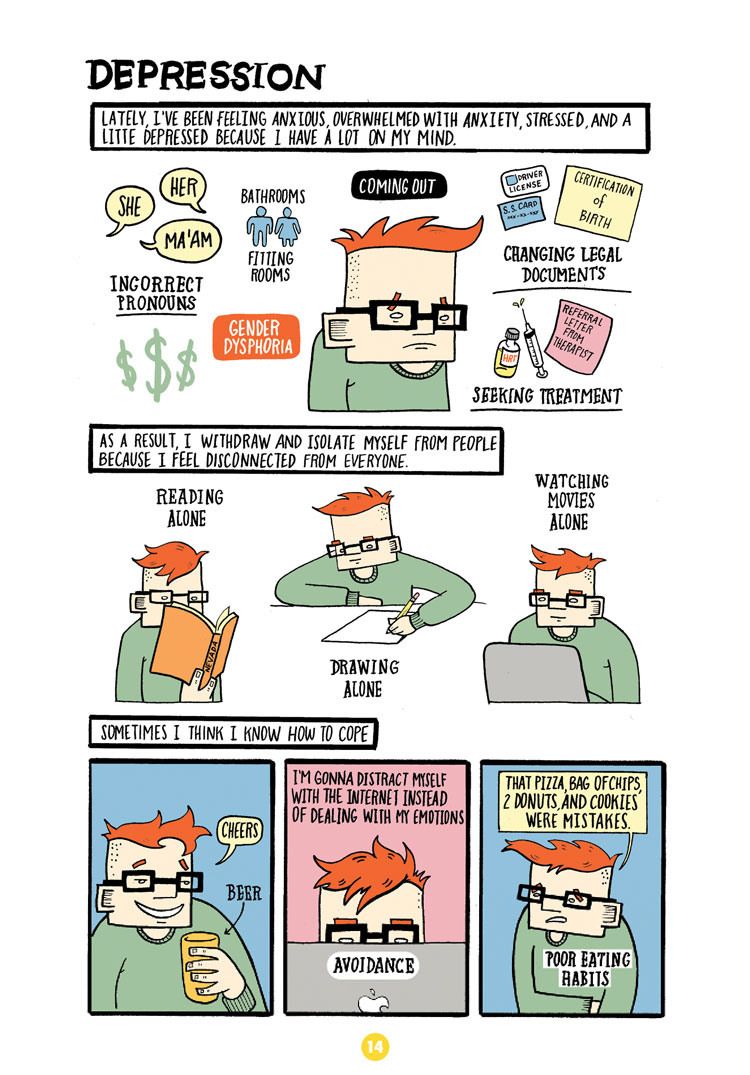 MSG: What have been some of your favorite comics in general, and what comics — in addition to Gumballs, of course – would you recommend to trans readers in particular?

For trans readers, I’d say check out Tomboy by Liz Prince. I absolutely loved it. It’s a memoir comic I believe anyone will relate to because at some point, we all question who we are. Growing up, Liz doesn’t conform to gender norms, which can be confusing in a world where society expects boys and girls to behave and express themselves in a certain way. She discovers her identity by questioning gender roles and gender stereotypes and ultimately, she decides gender is not defined by either.

MSG: Any final thoughts or special teases you’d like to share with the Comicosity audience about the December arrival of Gumballs #1 from Top Shelf?

EN: For folks interested in a new voice in comics with a unique style, go check it out! You can even pre-order Gumballs #2!

Top Shelf Productions (via IDW Publishing) will release Gumballs #1 by Erin Nations this December! Call your shop now to pre-order.