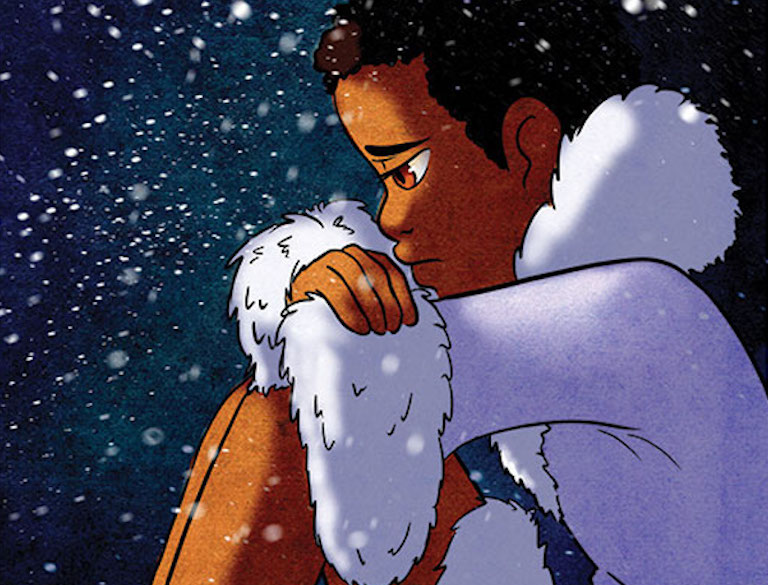 All three of my children have grown up with stacks of the Princeless comics around the house and more digital copies on our ComiXology account. They have been surrounded by the story of Princess Adrienne – locked in a tower by her father, to be rescued by a prince, only to get fed up and use the dragon guarding her to rescue herself. They meet comedic relief companion, Bedelia, and set off across the countryside, looking to rescue Adrienne’s other sisters. The other girls have also been locked away, yet not is all as it seems. Each of the sisters adapting to their captivities in various ways and do not necessarily need a traditional rescue. Someone else who ends up needing rescuing his Adrienne’s brother, Devin, who cannot seem to conform to his father’s definition of what a prince ought to be.

What was once hard find in single issues and a lone trade, six years ago, has grown to what will now be seven volumes, and spin off series such as short story collections and the hit Raven: The Pirate Princess. It has also won multiple Glyph awards and been nominated several times for an Eisner. Comicosity was able to ask Princeless creator, Jeremy Whitley about this latest entry into the Princeless series as well has how the vision for Adrienne’s story has changed over time. 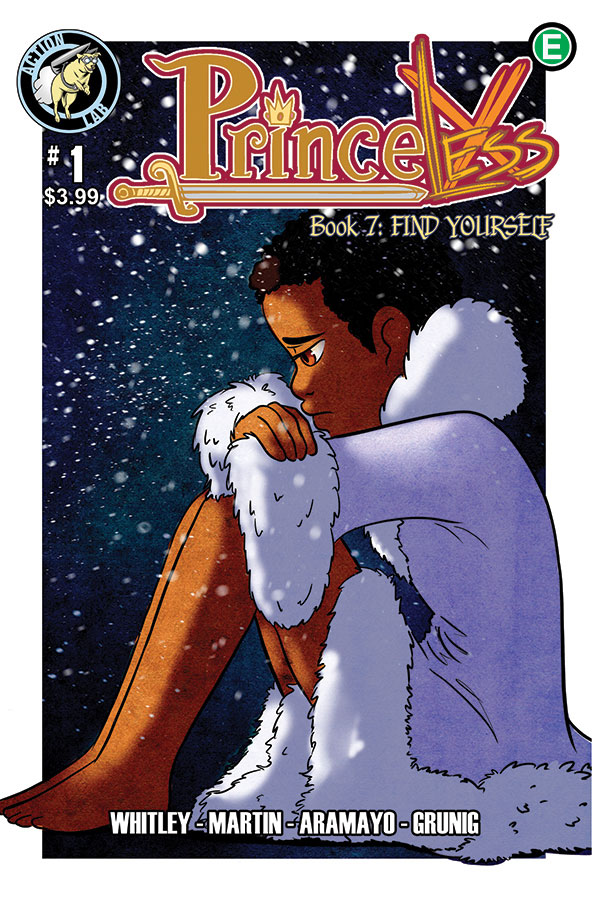 Volume 7 of Princeless; Find Yourself will be released October 17, 2018 from publisher Action Lab Entertainment. Diamond Code: AUG181430 if you’d like to make sure your local comic shop is ordering it.

Jessica Boyd: Save Yourself, Get Over Yourself, Be Yourself, Make Yourself… and now soon upon us will be the latest story with Princeless: Find Yourself. What is Adrienne up to time?

Jeremy Whitley:  This go round Adrienne is out to rescue her eldest sister, Alize, and to be honest she’s not in a great place.  Bedelia has left and with Adrienne feeling abandoned, she’s even started sabotaging her relationship with her faithful dragon Sparky.  Adrienne will be facing this particular challenge alone…and her timing couldn’t be worse, because the most dangerous knight in the kingdom, The Black Knight, is about to catch up to her.

JB: As you stated, Bedelia is no longer traveling with Adrienne on this latest rescue. She was a big part of the launch of the series. Has there been in major deviations in this series or has it gone to places that you were not expecting?

JW:  Oh yeah, there have been quite a number of deviations.  I mean, I basically started deviating from my original plan in the third issue of the first arc.  I had never really planned to bring in Bedelia, it just kind of happened naturally due to the kind of story I wanted to tell.

As for recently, when I first laid out the plot of Princeless as a whole, this was about the point where I thought I would be winding up this story.  As it turns out, I’ve had a lot more to say than I had originally planned. First we added the arc with Raven, then we’ve given the sisters a lot more to do story-wise than I had originally thought, now we’re heading toward the climax of an arc for Devin that kinda happened as I was writing it – and it’s turned out to be one of my favorite bits of the story and has included one of my favorite characters I’ve created in the series – Tempest the elf.

JB: You’ve often spoke of Princeless being a series that you created so your daughter would have a relatable comic character. Is it fair to say the series has grown in subject matter as your daughter has grown up? How do you gauge what issues to tackle?

JW:  Honestly, yes.  When the book first started, my vision was simply to make it an inclusive and feminist fairy tale.  But as we brought in each of the sisters, I began to realize that these were girls who didn’t necessarily need to be rescued from a monster, but from themselves.  Angoisse, for example, isn’t at all afraid of her guardians, but needs someone to give her permission to be independent and powerful. She defines herself largely by the relationship she’s in – and that’s a much really affliction to a girl or boy who might be reading this book than dragons or zombies. 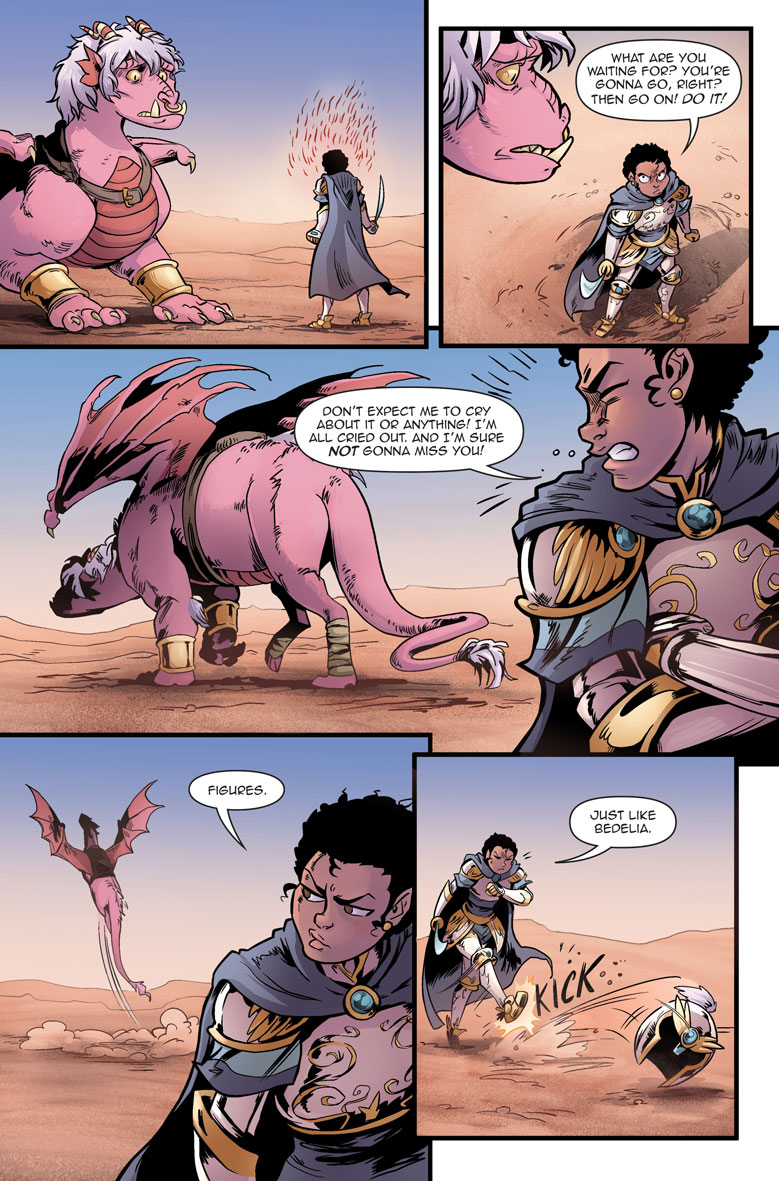 JB: You have somewhat divided the sisters into archetypes for women- the feminine, the goth, etc. Sometimes, those types of attempts in a medium like comics can fall flat. However, in Princeless, they are well rounded and know just when to subvert. How do you make sure they’re not one dimensional?

JW:  My goal with the characters of the sisters was to start with the kinds of princesses we already see in fiction.  These are girls who are fitting into the roles that Adrienne is rebelling against. But I also wanted to show that nobody is just that one thing.  Even people who have adapted to the roles they are expected to play still have rough edges and I wanted to make sure we get to see those rough edges.

The big thing for me was that I wanted to show that the princesses were sort of falling into their own traps.  Angelica defines herself by her looks. Angoisse defines herself by her relationship. The twins define themselves by each other.  There’s nothing wrong with taking pride in your appearance or enjoying being in a relationship, but when you don’t allow yourself to see the rest of the world and explore outside the box things that you might care about, it’s you that you’re hurting.

JB: The artist of the series, Emily Martin, has been with Princeless since the second volume. Has the way the pair of you collaborated changed over time?

JW:  For sure.  I know with the first volume Emily was still pretty shy about making a bunch of suggestions or treating it as her own.  As we’ve gone on, we’ve integrated a lot more of Emily’s ideas and I think I’ve gotten a feeling for what Emily likes to draw and what’s going to come out amazing when she does.  As a result, I think the book looks better than it ever has and the story is stronger as a whole. 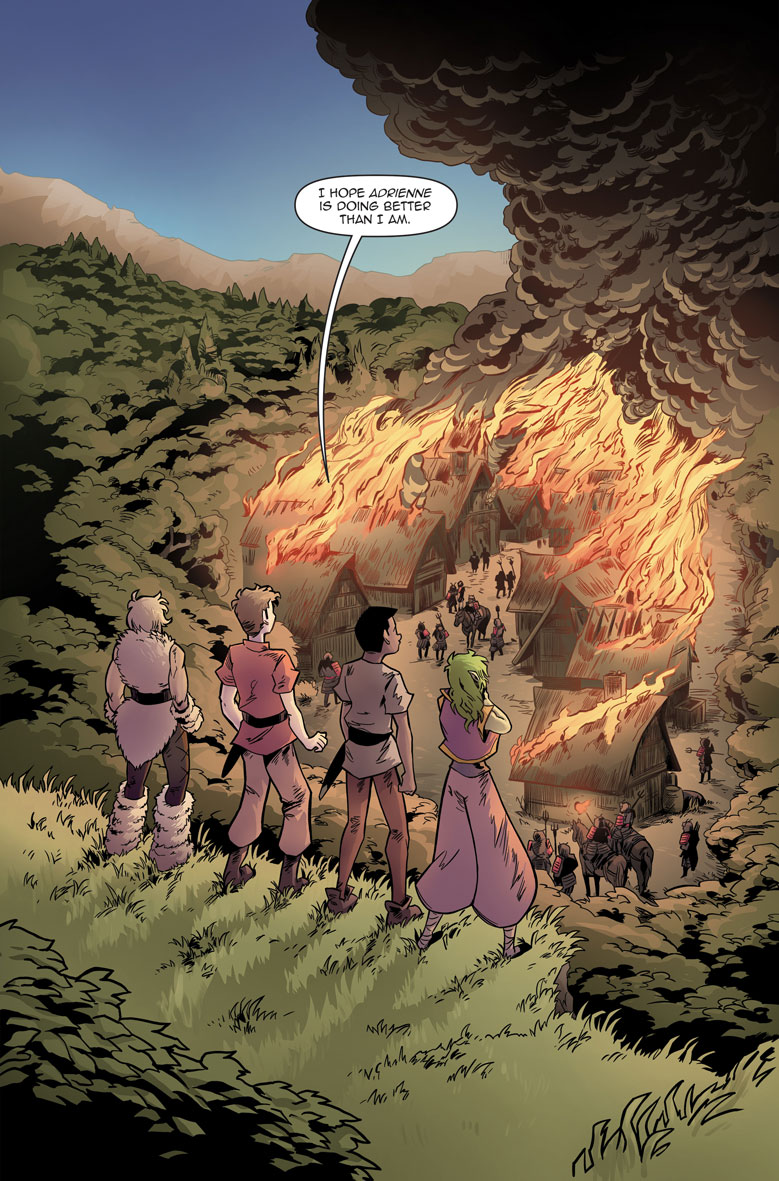 Devin finds himself on his own quest to save a border town on the edge of the kingdom.

JB: I’ve said many times this is a series that I first put in the hands of my oldest son, not my daughter. Although he devoured every issue, he was especially with the appearance of Adrienne’s brother. What do you think about the broad gender appeal this series seems to have?

JW:  Honestly, it wasn’t something I considered when I first started writing the book.  I knew what I liked and a lot of that is reflected in the book, but my mission was to write the kind of book for girls that I feel like is often restricted to boys.  Adrienne doesn’t have a romantic interest, it’s not in danger of turning into a romance at any time, and as much as I loved Devin from the outset, he was never really meant to be the protagonist.

Honestly, Devin is more like me than I think a lot of people would guess looking at me.  I’m a big guy, I played football in high school, but I was also the kid who had to explain to my high school football coach that I had to leave practice early to get to play rehearsal.  I wrote a lot of truly awful teenage poetry. I like to think I am pretty romantic (in both senses of the word). As the story went on, for Devin it became about this dual disappointment of wanting to be this other thing but also feeling like he was letting his father, family, and kingdom down by not being something he never wanted to be.  It’s a part of toxic masculinity that rarely gets talked about that young boys aren’t allowed to be tender or caring.

I don’t think I actually realized how important Devin’s part of the story was (and how important Adrienne’s story was for boys to read) until yourself and other mothers, fathers, and librarians started pointing it out to me.  Not only is it important for young boys to see a heroic male character who values his emotions, but it’s important for boys to see that girls are and can be heroes. A side effect of the division of books into “for boys” and “for girls” is that during formative years, boys rarely read books about girls or with girls as protagonists and I am a firm believer that that has a profound and lasting effect on their ability to see women as heroes or even equals.

JB: In the first few years, when Princeless was out, it was sometimes a hard commodity to come by in print. Now, the first six volumes are readily available on Amazon and ComiXology, and as stated, in libraries. What has it been like to see that type of growth and outreach?

JW:  It’s been wonderful.  Honestly, going to ALA the last few years and having librarians that are thrilled to see me and rant and rave about how much they and their young patrons love Princeless is really amazing to me.  It’s been interesting to be in an evolving marketplace where, not just Princeless, but also Raven and Unstoppable Wasp have had difficulty taking root in some comic shops but have had a chance to reach the audience that’s not always in the comic shops through digital and bookstore sales.  I’ve been making these comics for seven years and in the early days it was largely a question of trust for me and Action Lab that the marketplace was going to adapt to us. Seeing it happen has been a pretty wonderful experience. After all, I’ve been making Princeless for seven years. Ms. Marvel, Lumberjanes, and DC Superhero Girls didn’t exist when we started this.  Whether we’re the most successful comic or not, it’s nice to see that we were right and it’s wonderful to have comics I can read to my young daughters. I like to think we had some part in shoving the industry in that direction.

You can check out more early preview pages of the latest volume of Princeless: Find Yourself by clicking here.The first issue of this new volume will be available October 17, 2018 at your local comic shop using Diamond Code AUG181430 , and on ComiXology. You can check out previous volumes of Princeless through trade at your LCS, bookstores, Amazon and ComiXology.  If you are looking for other awesome series featuring women superheroes and STEM, Whitley has a second series that will be returning October 17, 2018: The Unstoppable Wasp #1. If you want to check and see if your store is ordering this series the Diamond Code is AUG180894.