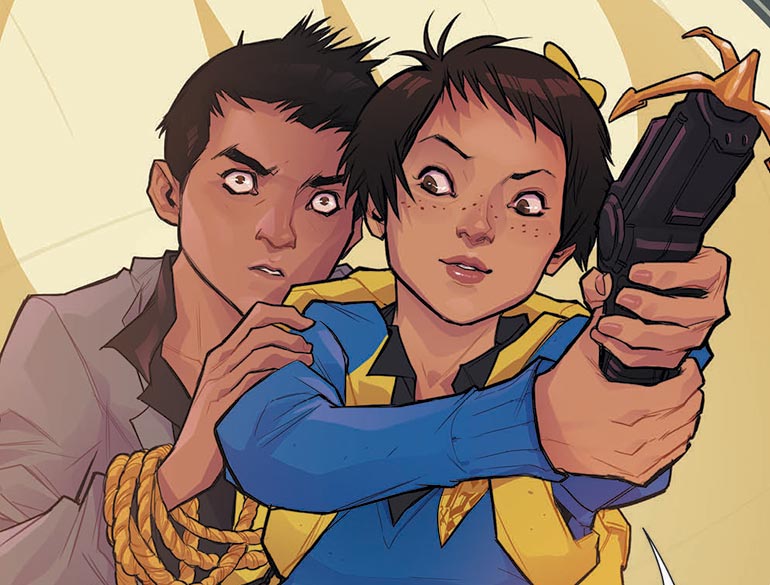 The Ballad of Olive Silverlock is on the horizon… and with it, the final arc of Gotham Academy: Second Semester.

Jumping out of the shocking events of today’s issue #8, Gotham Academy’s own Detective Club will have to fight for the soul of their friend, in the conclusion of the story writers Brenden Fletcher, Becky Cloonan, and Karl Kerschl set out to tell from the very beginning. And to get us on our way, the three creators sat down with Comicosity to talk a little about finishing up Olive’s story, as well as how they got Colton Rivera to come out finally in the last story arc.

Matt Santori: Both issues #7 and #8 dig deep into Olive Silverlock’s true history, now unraveling right in front of her friends. Tell me a little about the path you took to get to this point.

This story actually was thought out back in 2014, and we’re actually right now coming to everything we had planned from the very beginning. Which is crazy. 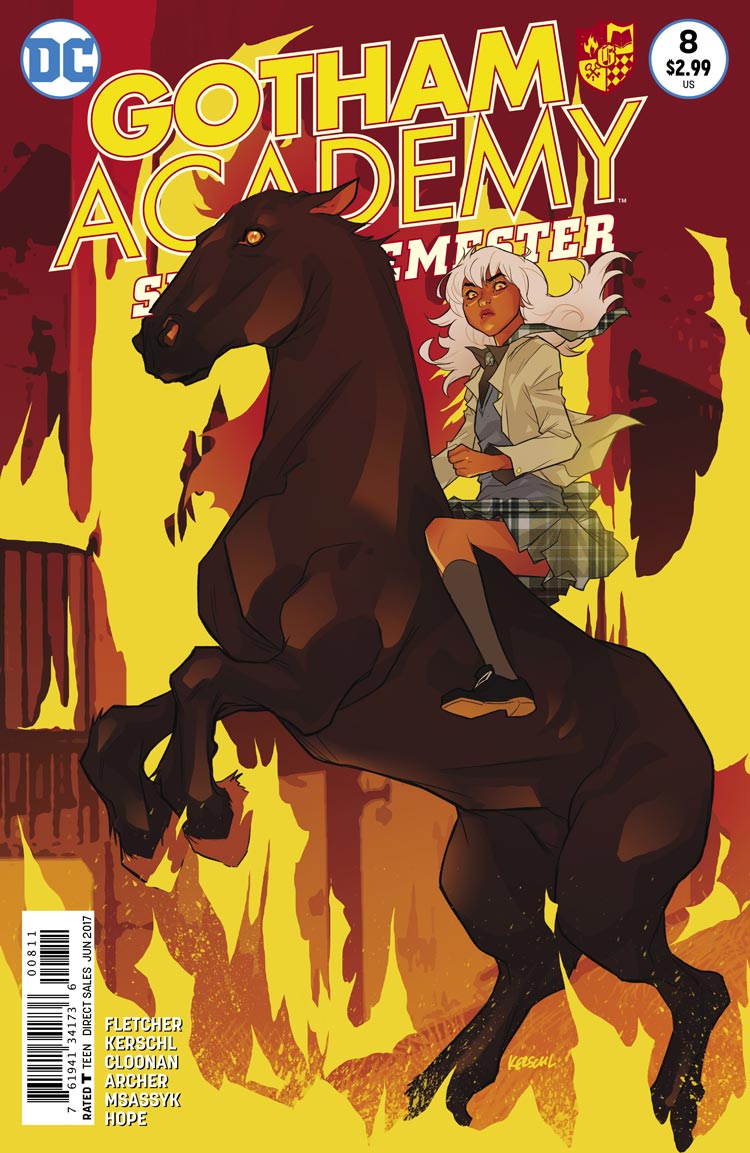 Brenden Fletcher: It’s amazing that we’ve been able to tell this kind of sprawling, YA [young adult] mystery story in the DC Universe. It’s incredible. We felt so blessed that we were allowed to start it. We didn’t think there would be so much support to get to the end of Olive’s story.

There’s still a lot more mystery to be revealed, and we still have to answer a lot more questions. But it’s an amazing feeling to be able to do that. We’ve planted a lot of seeds the last few years, and we’re going to start addressing that stuff.

MS: Already we’ve seen the reveal that Olive is tied to a very old, famous name in Gotham City history — the Arkhams. What can fans prepare for as that blows up in today’s issue and onward?

BF: The culmination of centuries worth of betrayal and anger! [laughs] The hurt that Gotham has inflicted on certain families. I know this sounds really dark, but Gotham is a dark place. Ultimately, what we’ve been doing is this sort of young adult exploration of how a place like Gotham can affect a young person. This is seen through the lens of this family and Olive’s familial history has been one riddled with torment and horror. 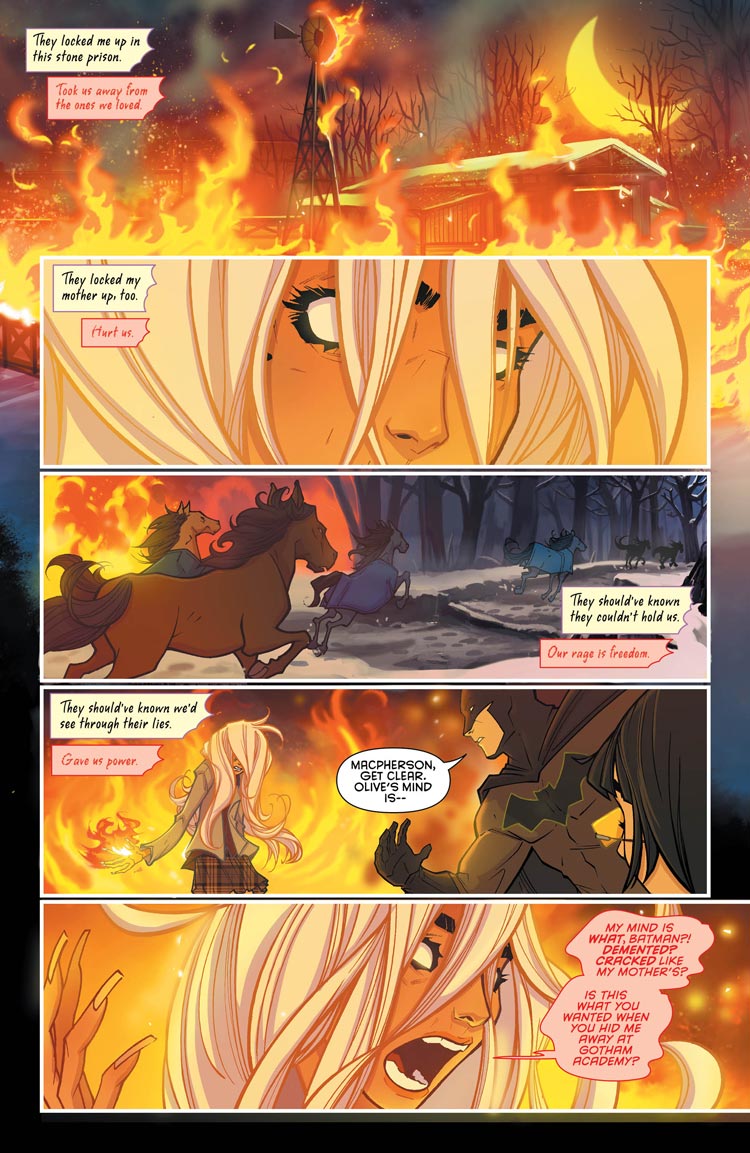 We’re now seeing that come to the surface, issue by issue, and how it has come to divide the Detective Club. Olive has been pulling herself away from her friends, and there’s been a question of why she would do that.

We’ve written it in a way so that it felt like it was just a young person’s school issues. But we’re starting to see now that on top of whatever Olive has been going through on a day-to-day basis as a student of Gotham Academy, there is a centuries long history of the city and its mistreatment of certain people. It’s at play in everything that she is.

Karl Kerschl: It was always meant from its inception to be pretty dark. And what we wanted to explore was the idea that many of these Batman characters — supporting and villains — are explorations of different types of mental illness. Often they’re persecuted for that. And often, it’s a grey area of how villainous they are or not. Two-Face is a great example of that. Most of the Batman villains are, really.

We thought from the beginning, “What if we took this kid and play out the origin of ‘villainy’ in the Batman Universe over the course of a few years?” It would really make you sympathetic to a character like that. 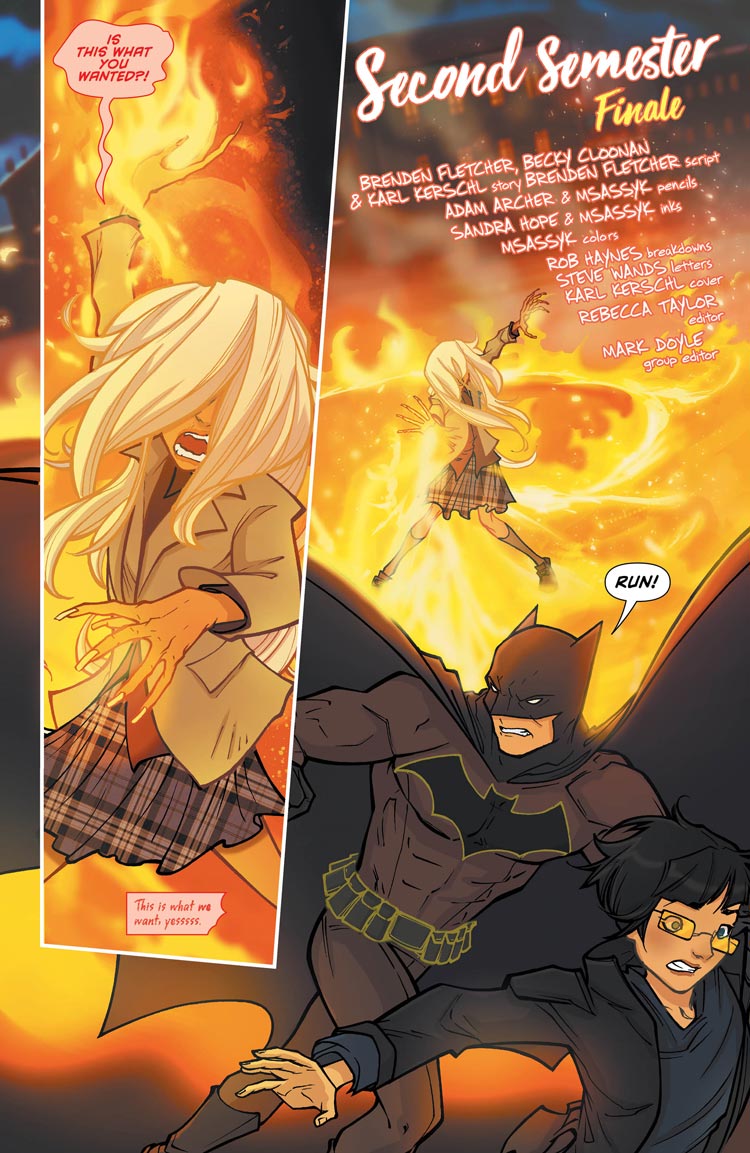 MS: In some ways, it makes all the other characters all the more heroic in what they need to do now. Pomeline is clearly at the forefront of that because of her family history. Was that planned from the beginning as well?

BF: Pomeline and the Fritch family’s history did morph a little along the way, as characters often do in storytelling. We always intended for there to be some aspects of the Fritch story to be in there, but it’s a little more closely tied to the Silverlock story than we had originally intended.

What it gives us in the immediate space in the issue is a nice form of conflict that we’ve toyed with in the past, but now we’ve got it there directly. Olive has an actual direct connection to Pomeline in a way that Maps wishes she had with Olive. These three young women have always had really strong feelings about each other, with a real push and pull in their dynamic. It gives us a little more dynamism in that triumvirate. 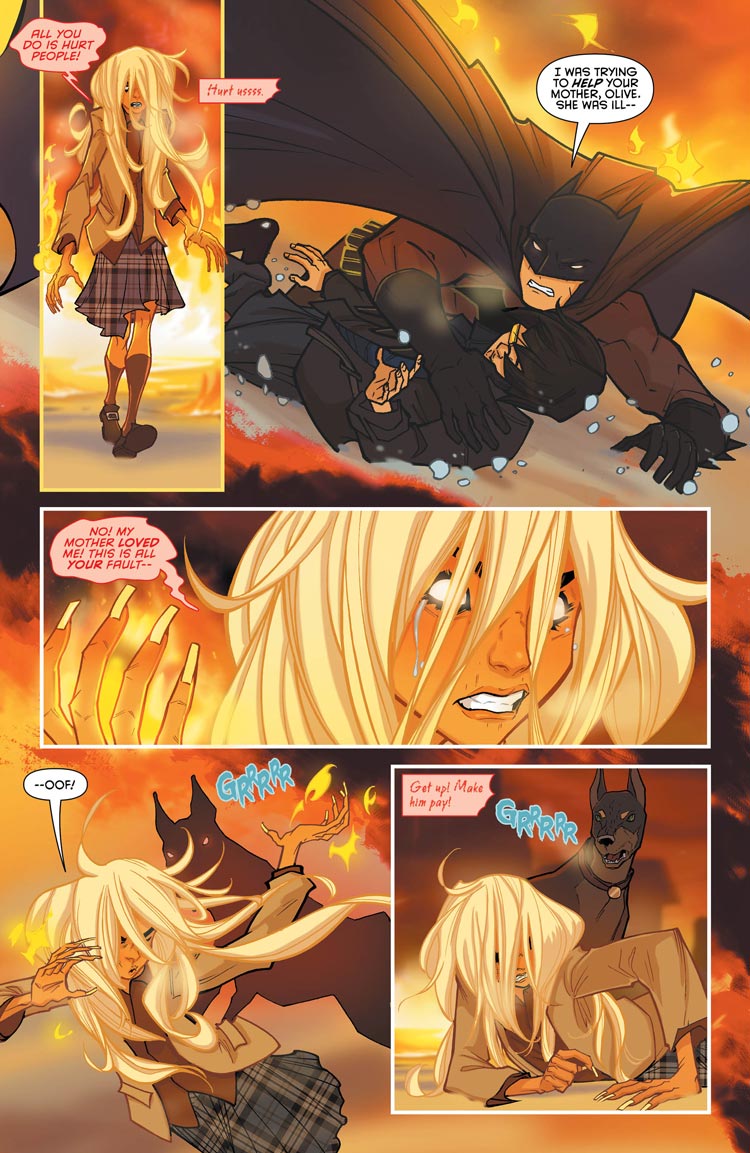 MS: With issue #9, we move into the final story arc of Gotham Academy. Tell me what you can about the future of the Detective Club in the wake of completing Olive’s story.

BF: We’re getting to play Olive’s story out, which is incredible. It’s an amazing feeling to be able to tell the end of a long-form, serialized story.

I don’t think we can talk too much about the specifics of it, but that we’re going to leave the Detective Club in a place where you’re going to be excited to see their further adventures. 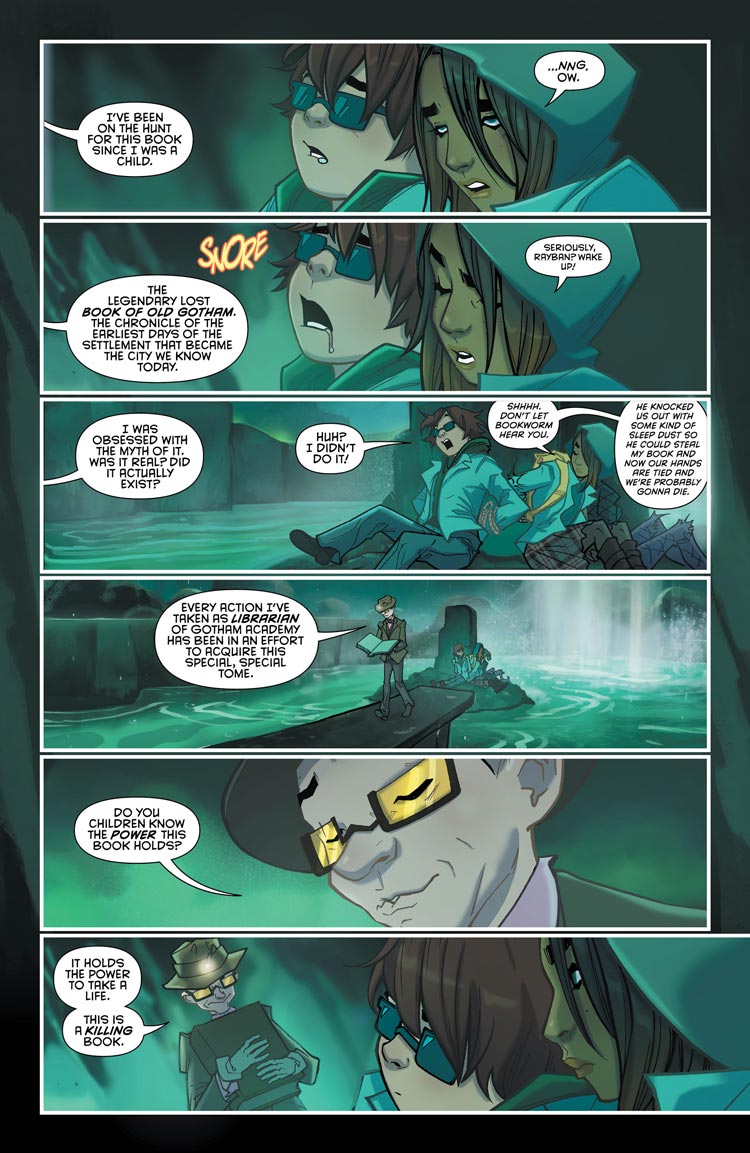 BC: I would add that just because this is the end of the initial story that we wanted to tell with Olive doesn’t mean it’s the end of Gotham Academy. There’s still a lot of stories to be told in that building.

I just can’t believe we’ve gotten to this point — things that we’ve been talking about for years, from 2014 when we first pitched the idea. Now that we’ve gotten here, it’s really kind of bittersweet.

KK: I think it’s kind of amazing to me — and humbling — that these characters were strong enough and resonated enough with people from a very early stage. Enough to support their own mini-arc of stories by other people who wanted to tell stories about them.

I think this format has been amazing to be able to unravel Olive’s story, but I’m actually really excited to have the freedom to explore other stories and the supporting cast in whatever media that happens to be.

BC: So yeah, we’re going to wrap up Olive’s story and then explore some different options. 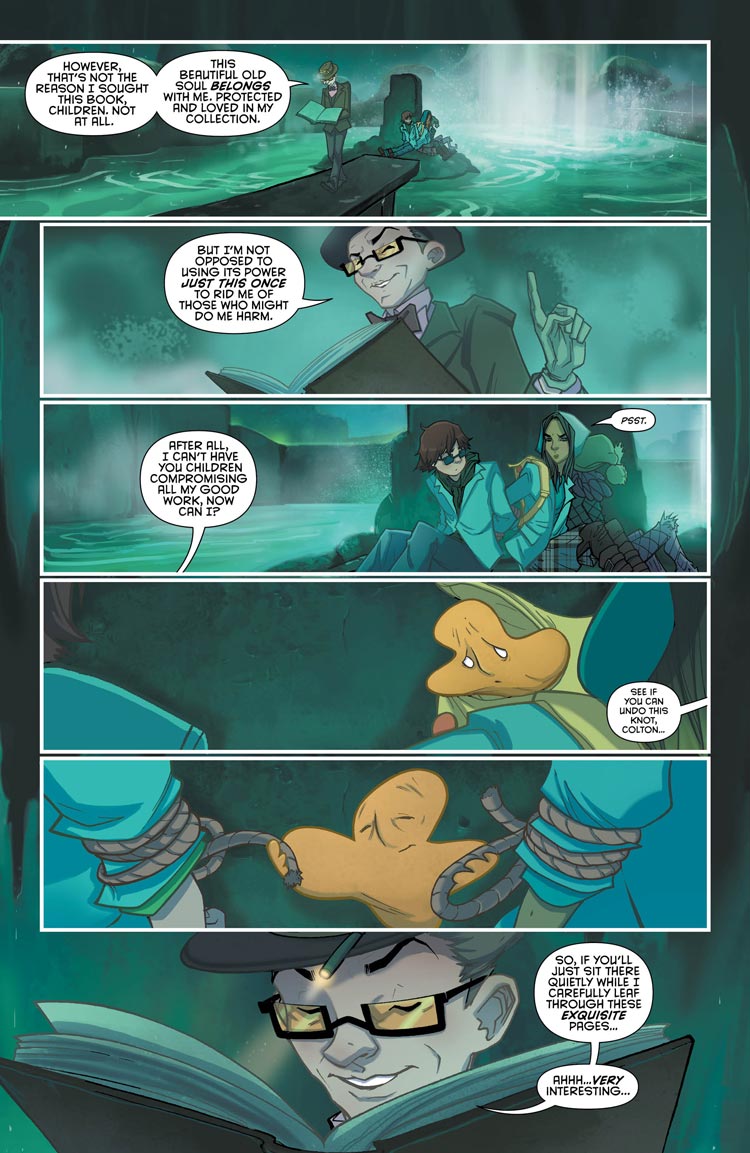 MS: The other thing I wanted to circle back with you all on is Colton’s coming out moment to Kyle in #7. It felt like a long time coming. Can you share a bit about the process of getting him there?

BF: It’s something we wanted to do from the beginning, but all we had at first was a guarantee of six issues. We had to tell a compelling Olive Silverlock-based story, set in Gotham, somewhat connected to Batman, and that focused on relationship between her and Maps in those six issues.

It became a conversation we had after we got past that point of where we could develop this subplot with our supporting cast. Which issues could be start to focus on them? It was a real challenge.

It’s unfortunate that it took us so long to get to put the spotlight on the supporting cast, but we were finally able to tell the story we had wanted to tell. To give Colton his moment in the sun. And shine the spotlight on him at the same time we were shining the spotlight on Pomeline and revealing her background and family history.

It was one of the more fulfilling aspects of being able to work on the book as long as we have.

KK: I’m proud of what we were able to accomplish in that span of time, but I feel like we only just scratched the surface. These characters are extremely deep and complex. It feels like none of them have gotten enough time quite yet.

BF: We didn’t get to Colton’s parents!

KK: That’s some of my favorite stuff, actually! 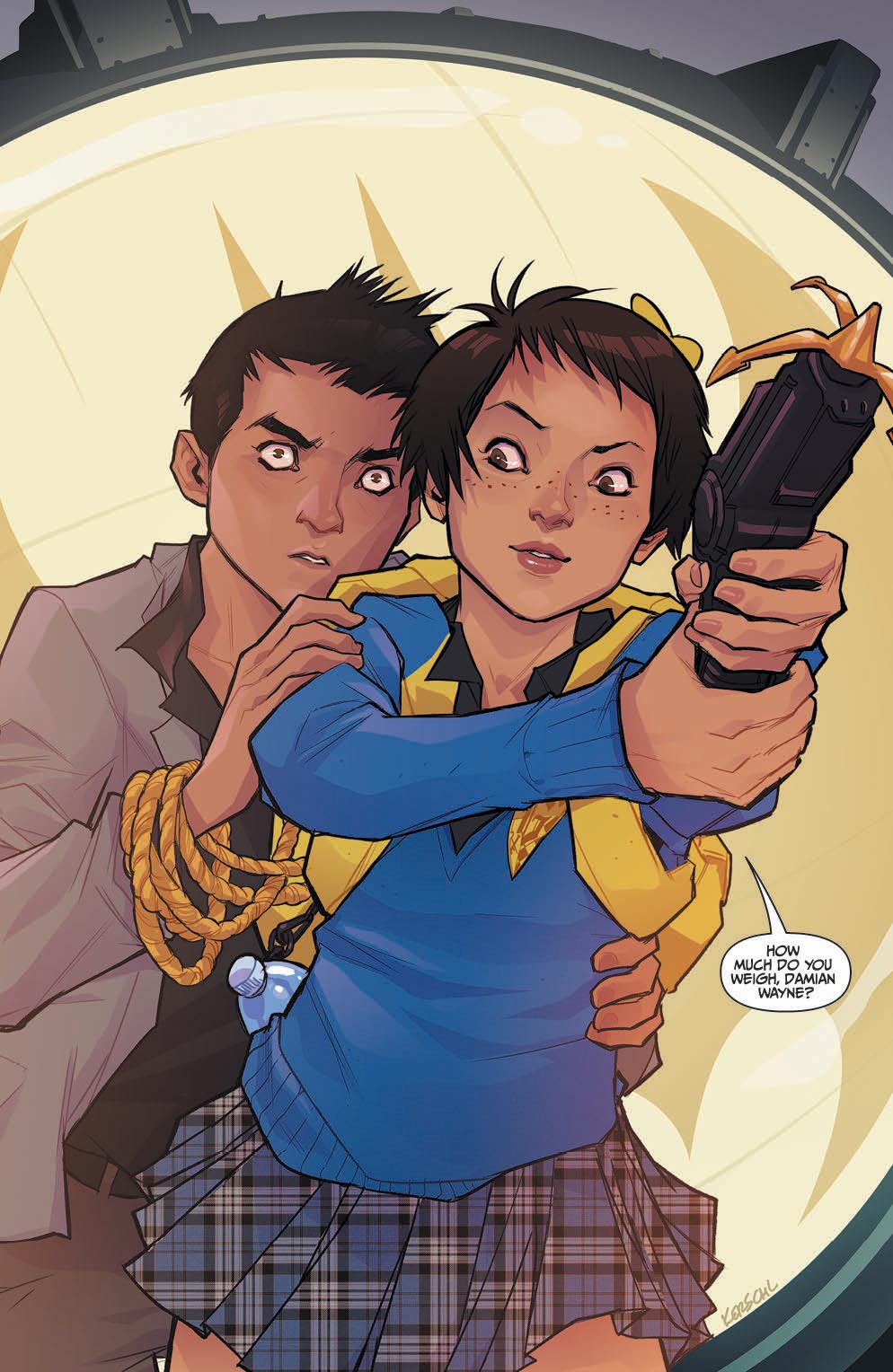 We just didn’t spell it out right away.

KK: You know, the first time we see Colton in issue #1 — on the spread of the map of the Academy — he’s examined his bruised, black eye in a bathroom mirror. It’s always something I’ve loved, but we never got to delve deeper into.

MS: Any other thoughts about today’s Gotham Academy: Second Semester #8?

BF: It’s a dark story that we’re telling now and it’s very emotional. It’s the revelation of everything we set up in those first six issues. If you’ve read Gotham Academy from the beginning, you’re going to get all the answers you ever hoped for.

If you fell off the wagon at some point, come back for these last issues in the Olive story. It really ties everything up in a way that we’ve always wanted to.