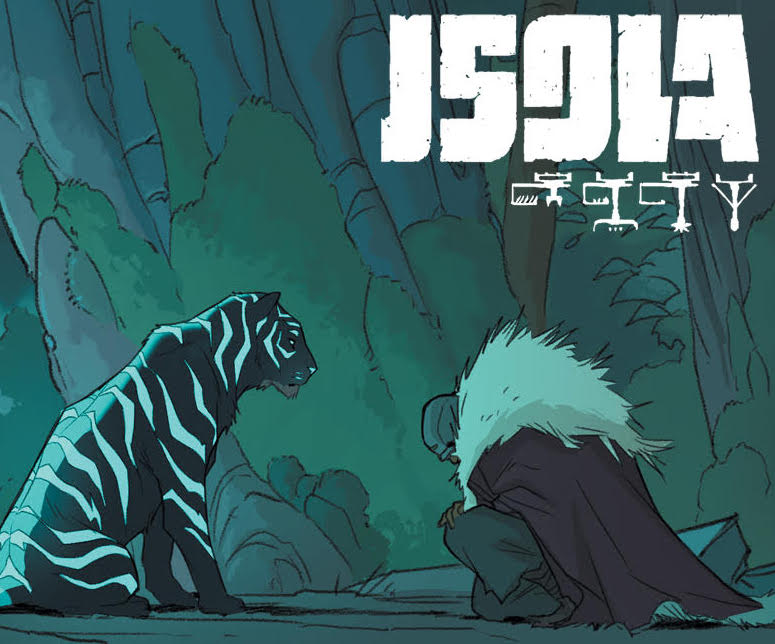 Fantasy worlds can sometimes be a dime a dozen but other times than can be immersive, vibrant, and tangible. The world of ISOLA, a new comic series by Brenden Fletcher and Karl Kerschl, is one of those that piques the readers interest and imagination. From just the first issue it is evident that they have spent years in creating the world that readers will be introduced to. I spoke with the inventive creators about the inspiration and meaning of this world. 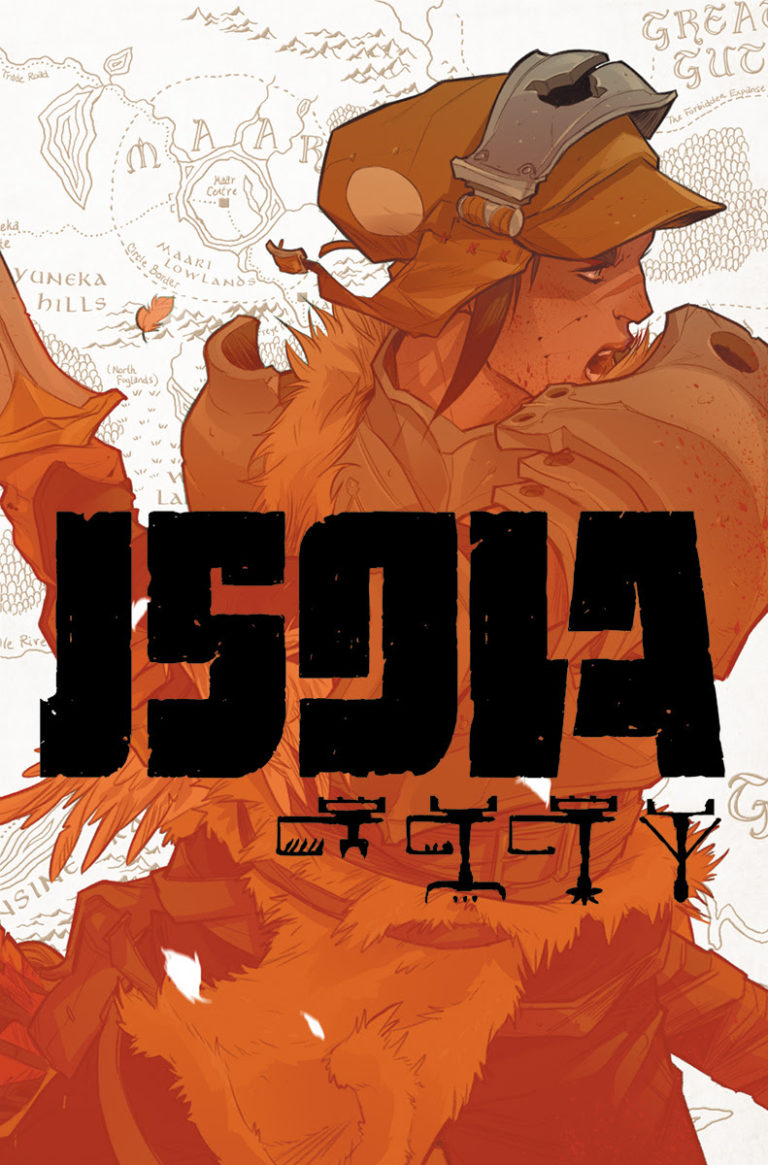 Chris Campbell: I understand that the idea for this story has been something that you both have been working on for some time. What inspired the creation of this story idea and how much has it changed over the years?

Brenden Fletcher: The desire to create this fantasy adventure tale has its origin in a project we developed through the late ‘90s to early aughts. We spent a ton of time developing it together and Karl cranked out dozens of gorgeous pages – we even had a deal to publish it through Image at one point – but for various reasons we just couldn’t make it happen. Life got in the way and we both had to abandon ship. In recent years, we toyed with the notion of returning to it but as time passed and we’d both grown, we decided it would be best to take a further step back and build again from the ground up.

By this time, Karl had been successful in creating two quite separate readerships through his work: one familiar with his superhero work on Teen Titans, Flash, Superman and the like and the other a rabid fanbase for his Eisner-award winning forest-animal-and-yeti webcomic, The Abominable Charles Christopher. When looking at his next project, Karl wanted to find something that would bring both audiences together.

We started crafting Isola shortly before our pal Becky Cloonan dropped the chance to work on Gotham Academy in our collective lap, an opportunity we couldn’t pass up. While working on the series, we continued to assemble Isola, pulling from all those years of work on our old project. And when we finally wrapped Academy, we were ready to bring Isola to the world. 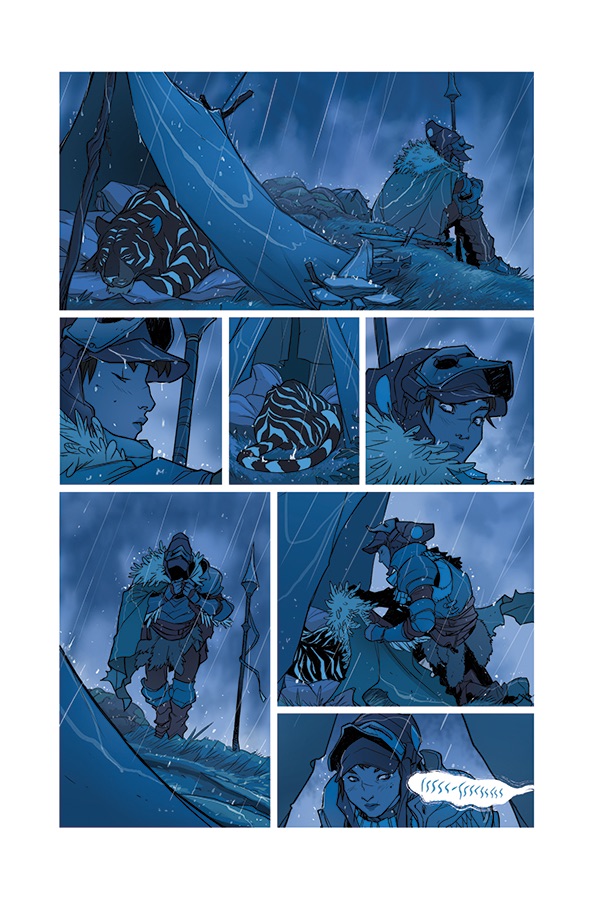 CC: Can you share with us a little about the world of Isola? How much of these world have you created beyond what we see in these pages?

BF: There’s very little of the vast world we’ve developed on those first pages of Isola. Issue #1 is just skimming the surface. We throw you right into the deep end with our protagonists, Queen Olwyn and Captain Rook, as they struggle to find their way to the only place in the world that might be able to help them out of a real pickle. We don’t set it up for you. We don’t even describe the inciting incident that drives the whole story forward. We just allow the characters to breathe and the action to unfold: something we wrestled with committing to. Despite being the more challenging option it just always felt like the right approach.

Moving forward through the first arc, you’ll begin to piece together all the relationships, background details of our protagonists and how they came to be where they are. The world will flesh itself out organically as the story proceeds. We both hate being spoon fed exposition in our fantasy and sci-fi so while this method of storytelling might prove occasionally confusing we feel it’ll ultimately be a worthwhile effort.

CC: What can you tell us about the relationship between the Queen and her companion?

BF: I don’t want to say too much as that’s really the core of our tale but I guess it’s not spoiling anything to say that ISOLA is really a story about two women caught between stations and now caught between worlds.

Olwyn comes from a long line of royalty, while Rook’s a rough and tumble adventurer from a family who get their hands dirty keeping the kingdom safe. They should never interact. Rook should never have been appointed Captain of the Queen’s guard. They should have remained on the opposite side of the capitol walls but that’s how the wind was blowing and that’s where the women have ended up. It might be exactly the place they need each other to be.

One more hint: Olwyn and Rook have a secret history. You get a sense of it in the ISOLA: PROLOGUE we ran in the back of the first five issues of MOTOR CRUSH. You can read it now in its entirety, as it appeared in those issues, on www.isola.ca. 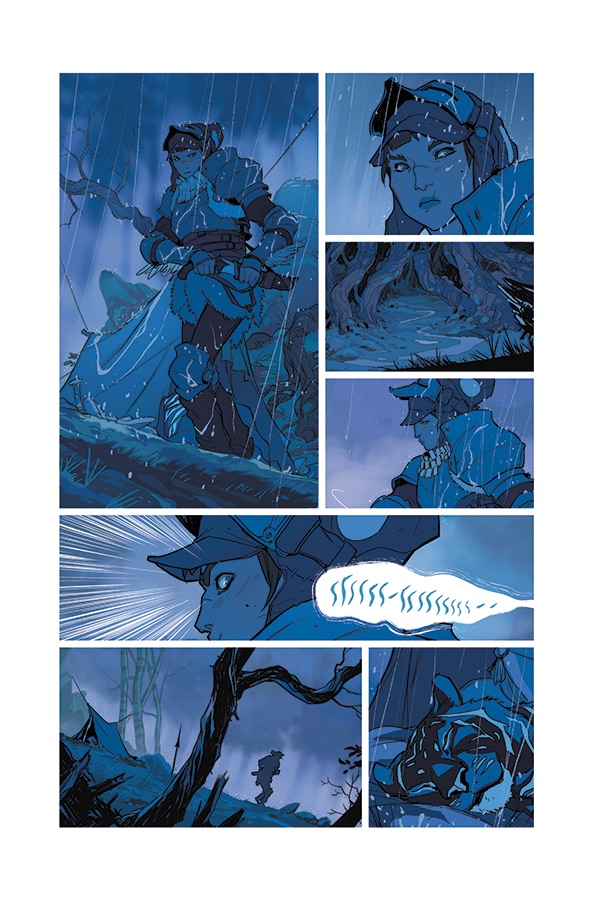 CC: What more can you tell us about their quest? What is Isola?

BF: Isola might be a myth. Every child has read the Isola fables, heard the songs, seen the paintings. It’s always depicted as an island in the middle of a massive body of water. They say it’s the place your spirit goes when it leaves your body. But has anyone ever seen it? Has anyone ever found a path to Isola? Does it really exist?

Most adults will tell you it’s a story told to children but Rook believes there’s more to it. She has to. Without the hope that Isola might exist out there, somewhere halfway across the world, Olwyn and Rook would be forced to accept that the Queen might be forever cursed and the kingdom doomed to fall.

CC: Is there any significance to the name of the Queen: Olwyn? Any relation to the Olwyn from Welsh tales?

BF: You’ll see echoes of myths and legends throughout Isola. The name Olwyn isn’t a direct reference but there are some characteristics of the tale of Einion and Olwen folded into ours.

CC: What inspired the design of the world in Isola?

Karl Kerschl: So many things. Design-wise, it’s really a hodge-podge of all the things I love, from Miyazaki films to Dark Souls and Zelda, to the forest behind the house where I grew up. The environments change as we follow Olwyn and Rook on their journey, as we’ll see drastically different parts of a very large world, so I’m excited to play with the geography here. The characters also went through several design iterations; the first few drawings were a little more technological in concept and I slowly pared it back to very simple fabrics and furs. The toughest part is probably the architecture. We don’t see much of that in issue one, but issue two introduces a city and I’m always struggling to depict it as something that’s not just a medieval Tolkien setting. One thing to lean on is the idea that there’s a lot of worship in this world – spirits are present in places and things – so I try to suggest that in the set design. 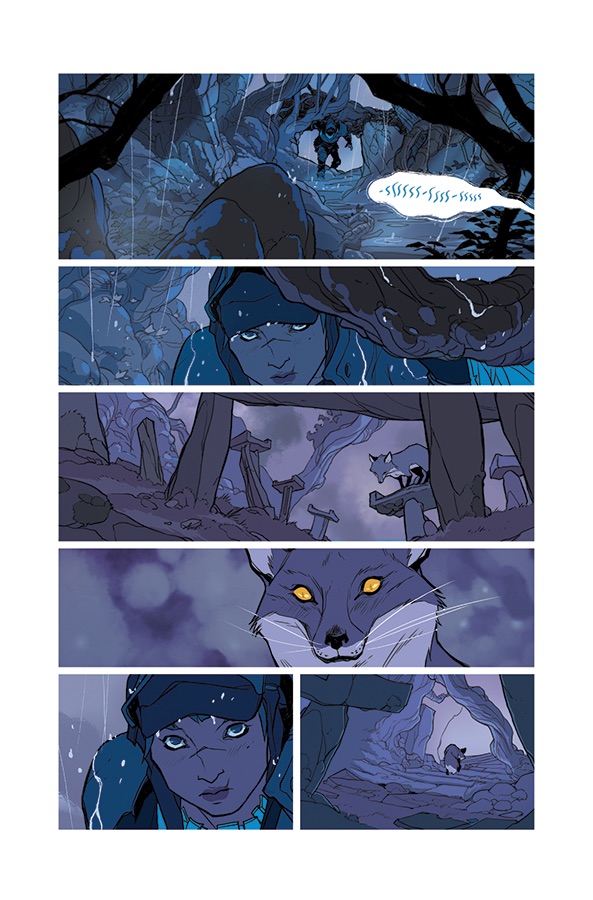 CC: The reactions of Queen Olwyn are very spot on for communicating to the reader her emotions. How difficult is it to give an animal human facial responses?

KK: It comes surprisingly naturally! I worked on my webcomic ‘The Abominable Charles Christopher’ regularly for seven years (it’s still all online at www.abominable.cc) and it’s a story all about animals (and one sasquatch) so I had to depict a lot of animal emotion. In that case it was usually for comedic purposes, so I could get away with broad slapstick, but Olwyn’s expressions are much more subtle. Everything about Olwyn’s demeanour is much more subtle and very controlled, so I have to be careful not to ‘over-act’ with her. Probably the first thing we talked about when starting to work on this story was that it would be difficult to tell the story effectively with only one speaking character and no narration. It lives or dies on the believability of Rook and Olwyn’s relationship and if only one of them ever speaks (and is usually afraid to say the wrong thing) then we have a significant challenge. But I love it the way it is. The limitations force us to make careful decisions and really be specific about what we want to tell the reader.

CC: What inspired the designs of the characters costumes?

CC: What can you tell us about the symbol/lettering that appears under the title?