While Infinity is rocking the Marvel Universe, an opportunity arises…Frank Tieri is primed to pull of a heist, and he’s assembling Spymaster and a crew to go after a big score. What score, you may ask? Well we’ve got the scoop below. This Wednesday Tieri’s mini-series Infinity Heist fires up and he took time to give us the scoop about what Spymaster is after and who is going to help him pull off the biggest score ever. 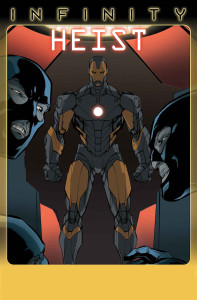 Aaron Long: So Spymaster is planning the biggest heist in Marvel’s history. Can you discuss the conditions that lead to this opportunity for him?

Frank Tieri: Simply put… INFINITY. When you’re a criminal, and you want to pull off a job, a Hell of a time to do it is when the cops—or superheroes, in our case—are preoccupied. And the heroes have PLENTY to preoccupy themselves with when it comes to INFINITY.

It all goes back to when people often wonder (at least I do) what the bad guys are doing when these big events like INFINITY are taking place. Well, this is what they’re doing—at least this group of villains anyway. They are doing what villains do. They’re taking advantage of a bad situation.

AL: Can you discuss what is driving Spymaster in Infinity Heist? What is the score he’s hoping to pull off?

FT: Well, when we were deciding what exactly our heist was going to be, what the ultimate score in the Marvel U would be, we decided there was one place above all…

If you think about it, it really is a crook’s mother lode—all that tech, the inventions, those armors… you wouldn’t have a shortage of buyers for that stuff on the black market, I’ll tell you that much.

So with that being said… can it be argued that what drives Spymaster is not only the score itself, but also him looking to exact a bit of revenge, too? Wanting to stick it to Tony Stark for all the times he’s beat him while getting a payoff at the same time? I’d say yeah, there’s probably definitely something to that… though I doubt Spymaster would even admit that to himself. 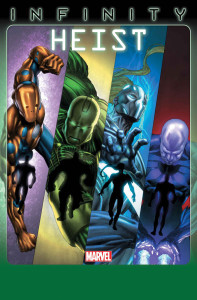 AL: When the idea of a heist series in the middle of a huge cosmic-spanning event came up, how was the decision made to focus on Iron Man’s rogues?

FT: Actually, in our original pitch, it wasn’t going to be just Iron man rogues. It was actually going to be a group of random marvel villains. But when editor Tom Brennan and I talked about it, and we both wanted to use Spymaster as our leader and with the target being Stark Enterprises… why the hell not make it a group of Iron Man villains? After all, wouldn’t they know Iron Man better than anybody?

Also—in case you haven’t been noticing—Iron Man? Sort of a big deal right now. With the heat from the movie, we figured it couldn’t hurt…

AL: Spymaster won’t be pulling off any heist of this nature on his own, can you shed some light on his crew and what is in it for them?

What I liked about using these characters is that nobody’s really done a lot with some of these characters recently—which is kind of the case with a lot of Iron Man’s classic Rogues gallery. Some of these guys are cool if used the right way and I hope one thing this series does is to show that going forward.

AL: Any special teases for Comicosity’s readers regarding Infinity Heist?

FT: This is more classic heist movie than superhero comic and like any good heist movie, something goes wrong in the middle of it. It pretty much hits the fan at that point and the group winds up fractured because of it, with people choosing sides and all that—which is pretty fun, because people get a chance to have villains to actually root for.

Lastly, I’ll say this—if you think you know what’s going in in this book, you really don’t. There’s a lot of twists and turns—a pretty big one towards the end—which I doubt anybody will see coming.