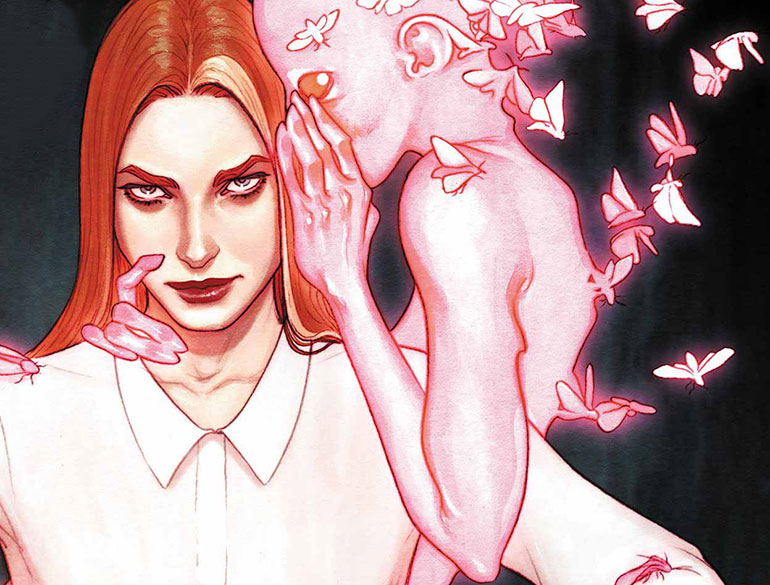 Deep underground Chicago, a powerful battle is being fought. But above ground, people are flocking to Astrid Mueller like she’s the second coming. If only they knew about the Clean Room!

With its first six issues complete, and issue #7 arriving this Wednesday, now is the time to jump onto Vertigo Comics’ newest hit. Writer Gail Simone sat down with Comicosity at this year’s C2E2 event and shared some of her thoughts about how Clean Room was inspired, how artist Jon Davis-Hunt transforms the horror from the script to the page, and the hidden link between making fans laugh and scaring them shitless.

Matt Santori: Thinking broadly on the idea of cult organizations like the Church of Scientology, why was this something you were interested in exploring in Clean Room?

Gail Simone: Well, it’s something I saw a lot of growing up in Oregon. I don’t think people realize that Oregon has a lot of cults per capita, actually. You hear all this stuff and hear it on the news, and it’s not just militias taking over government buildings out there in Oregon.

I’m also fascinated with society’s acceptance of and willingness to follow self-help gurus. Groups of people are willing to give up their autonomy to another human being. And that human being requires it, along with all your money.

It’s really about power struggles and control. And giving up control. I’m really fascinated by how that works in our society currently, as well as how it has in our history. 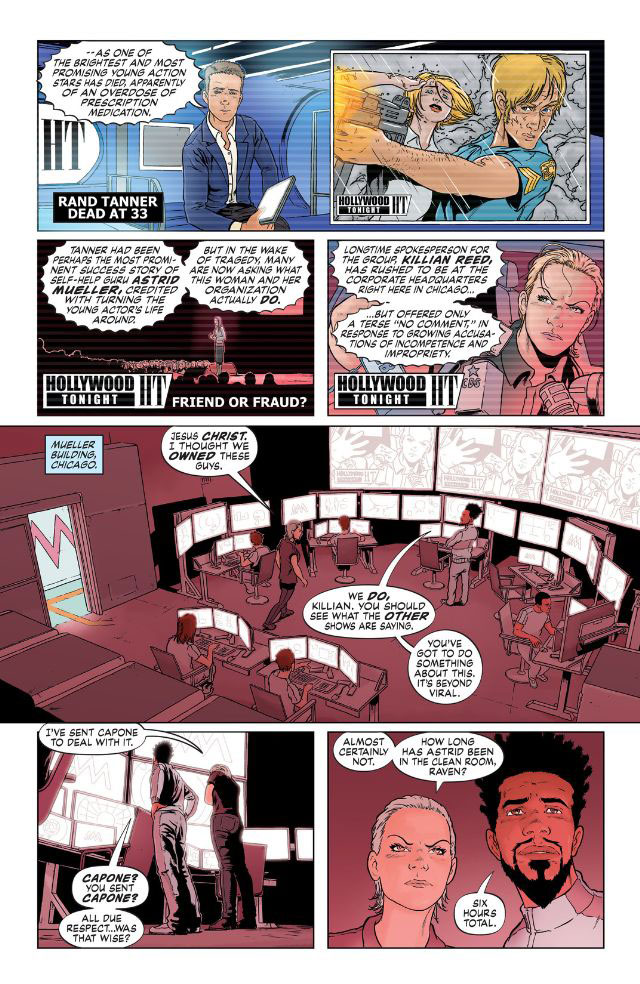 When I first was thinking about the idea behind Clean Room, I was actually in Chicago, walking to find Lou Malnati’s Pizza. We got kind of lost, and we ended up just looking at all of the gothic buildings and stuff. A lot of them don’t have signs. They’re not labeled. You don’t know if they’re apartments, houses, business, or what they are.

So, I started thinking about what kind of secrets could be in there. What if we had this really amazing building in Chicago with this really huge secret underground? And then the two concepts started to come together.

This is the thing that terrifies me: giving up autonomy. There are so many people in the world today that want control of us. They want control of what we watch on television, what movies we go see, what stores we go to, what we buy. They keep track of our purchasing. And they take advantage of it. The food we eat. Where we go. Unless we resist it.

Also, the freedom of the press is something that is so unique and important about America, and I think we lose our purpose sometimes. Creating Chloe is about that for me.

In the Superman mythos, Lois Lane is about that for me, the character that I love and identify with. So, with Chloe, I’m taking a journalist that has decided she has nothing to lose, and having her search for truth. She’s not about selling ads or focused on getting hits or views or ratings. She’s actually digging to find the real truth. That’s a really important piece of Chloe’s character.

Secrets, control, and trying to uncover the truth. That’s what Clean Room is about. 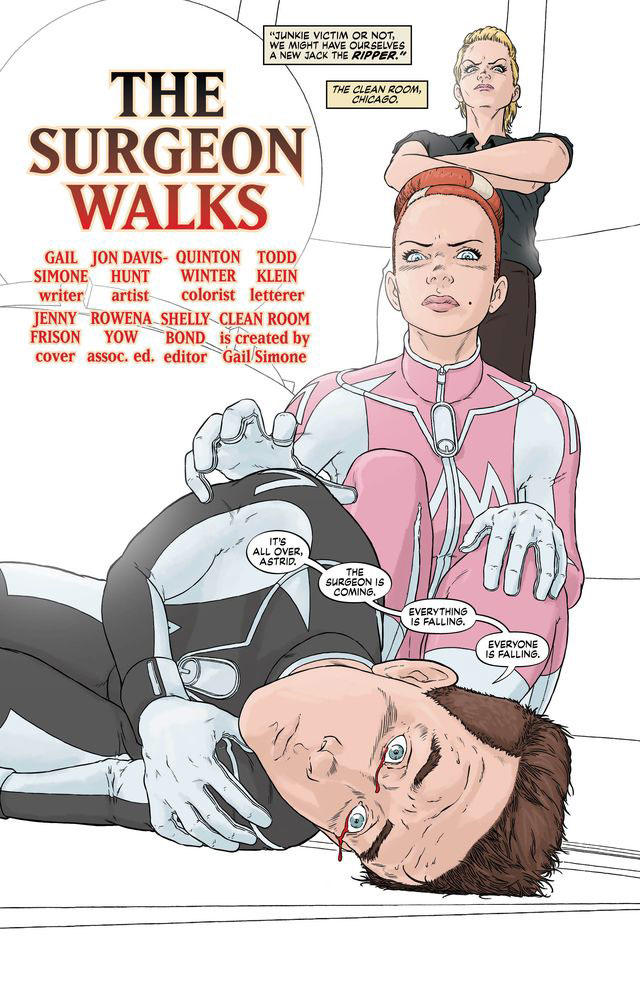 MSG: One of the things that gives the Church of Scientology (for example) its power is the inability of anyone to see inside. Almost right away, you make it so readers CAN see inside right away with language, how it functions — and then the deeper level.

GS: There are so many levels to it. It’s so global and they have so much money and control, that they can control the information as well. And that’s terrifying to me. They can make or break careers. They can get rid of people. They can do whatever they want.

Astrid feels completely justified in doing all of those things in any way that they need to. And there are plenty of people who are willing to jump right in and help her.

MSG: Something I thought about with Astrid is that while she is clearly a villain of the piece, she’s also very easy to relate to. She has a lot of charisma.

GS: I think a lot of the brilliance to that needs to be credited to Jon Davis-Hunt. When I was first discussing this with Shelly Bond, the Executive Editor of Vertigo, we were looking at a lot of art samples from top artists. She said to me, “I’d really like you to look at this video game designer from England. He’s done a couple of things for 2000 A.D.”

We had Jon do some designs based on a one-page description of the main characters. When his designs came back, they were NOTHING like I expected. And I knew right away that people were going to love Astrid. He really got that I wanted her to have this kind of charisma that’s irresistible.

I just knew: now we’re getting somewhere with this. How fortunate that we have a video game designer who can design the Clean Room! There are all these things that he’s absolutely delighted to do. The bigger the challenge, the happier Jon is.

I’ll send him a script where something happens to a character’s face and he’s like, “I get to draw this?!?!” [laughs]

Then the page comes in and you’re amazed. The look of the book just helps bring all that stuff together. 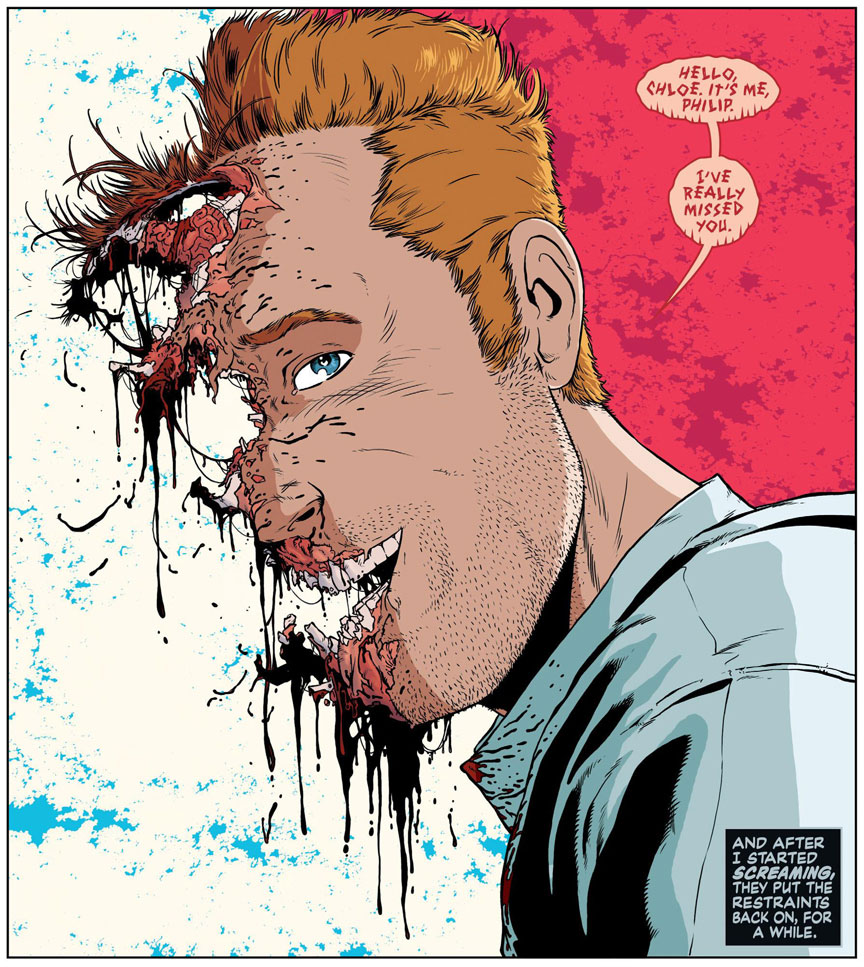 MSG: The horror Jon brings to the book does seem to be a level above what you’ve had in your books in the past.

GS: This is the difficult thing about doing something new like this that no one has quite seen before. Because no one knows what it is. They don’t what to expect.

People read the first issue, including editors, and were like, “What is happening here? I like it, but I just don’t know what to think of it.” I explained to Jon that I wanted there to be a real world aspect to it. We’re in Chicago. There are real people everywhere. Chloe’s world is real. BUT when the horror stuff happens, I wanted it to be like nothing we’ve seen before. We brought in the pink color and a few other things to set it aside. You just know that something’s off.

And Jon didn’t know in the beginning about Astrid’s real motivations or where these creatures come from. He just made it amazing.

And Jenny Frison on the covers, too. She just knew what we wanted and made it amazing. She had done the covers on Red Sonja, and those were absolutely amazing. Everything she does is stunning. So, I pretty much begged her to do the covers. And when I told her what Clean Room was about, she said she loved working on things that were disturbing, especially when you really don’t know why. Those covers are very vulnerable, scary, and disturbing. Some are very powerful and disturbing.

MSG: Along those lines, tell me about finding the balance between something being funny and something scaring you shitless. Because Clean Room totally does that.

GS: I think if you look at my body of work, that comes up quite a bit. I love humor. I love comedy. And I love horror. What do they all have in common? They all absolutely must be unpredictable. That’s where the trick comes in: figuring out how to get the unpredictability in.

My job, honestly, is to manipulate the readers’ emotions as much as possible. I’m aware of that as we’re moving the plot along. I’m trying to get certain reactions from the reader. When I do my final proof, that’s where I try to tighten that stuff up.

The roller coaster ride for the reader is very important. If you have everything at volume 10 all throughout, or even just at the beginning, there’s nowhere to go but down from there. You have to create these peaks and valleys and flat spots. If you do something really horrific, you need to give the reader some relief at some point.

I think the same is true of art. Sometimes your eyes need to have a rest so you can be impacted by the next image, even if the artist is absolutely amazing. This is also what you need to do with pacing. It can be tricky, especially if you’re balancing the visuals, the plot, the humor, the horror, the romance — whatever it is you have in there. You need to get the timing right to get the reaction right.

But it must be unpredictable above all. 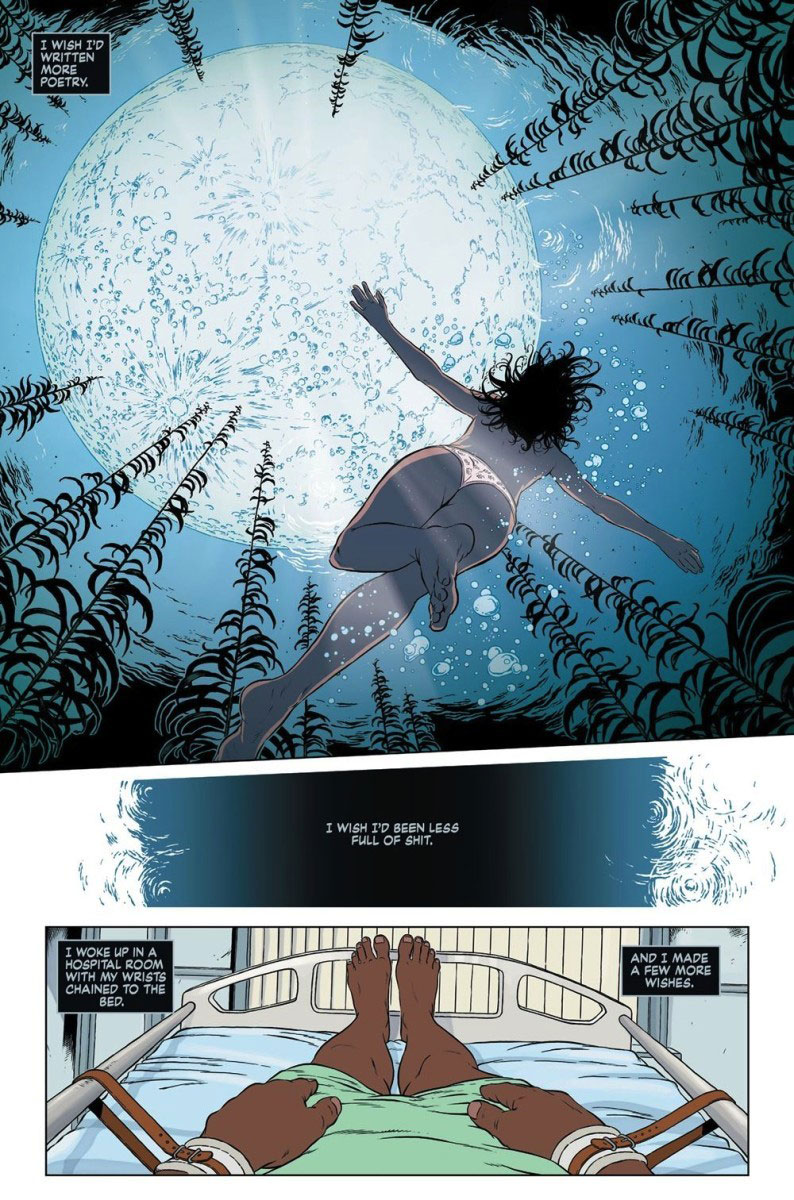 MSG: In terms of balance, you’re also striking that note with Astrid and Chloe directly. The two of them are coming at this story from two very different places.

GS: Exactly. When you’re figuring out the cast for your story, you want to have characters that will have some built-in conflict. Chloe and Astrid clearly do.

Astrid thinks she knows the truth. She’s just going to find it out, and you’re going to confirm the truth for her. Or she’s going to force it down your throat, whatever the case may be.

Chloe wants the truth, but she doesn’t know it yet. She’s going to do whatever it takes to get it, though. She’s got nothing to lose, and it’s all that she cares about right now.

Right there, you have conflict. Chloe doesn’t want to be controlled. Astrid wants to control. And she learns that Chloe’s not going to be too easy to control.

MSG: Anything fans should reflect back on as we go into issue #7?

GS: We answered some burning questions with issue #6 that people has been asking for throughout the first arc. Some questions weren’t answered and other new ones were asked. There are lots of surprises coming, and I don’t want to spoil, but I got a page from Jon the other day — not even a horror page — and it just made me gasp. You’re all in for a treat.