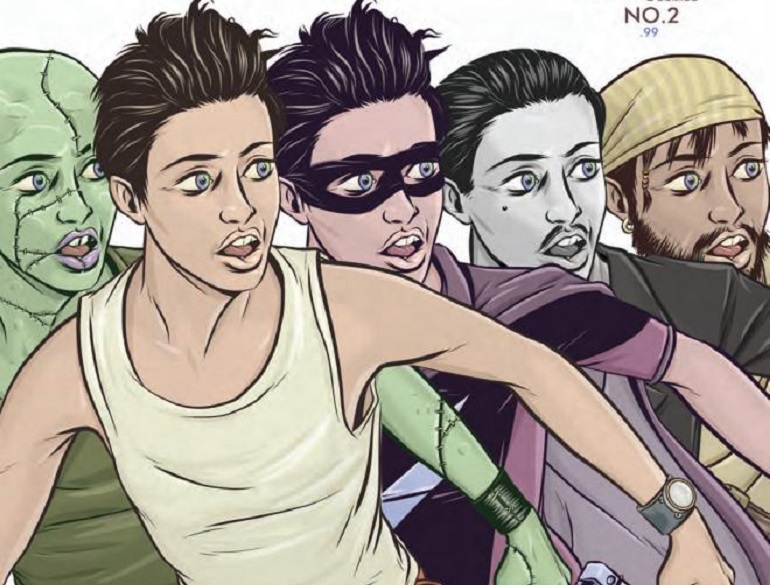 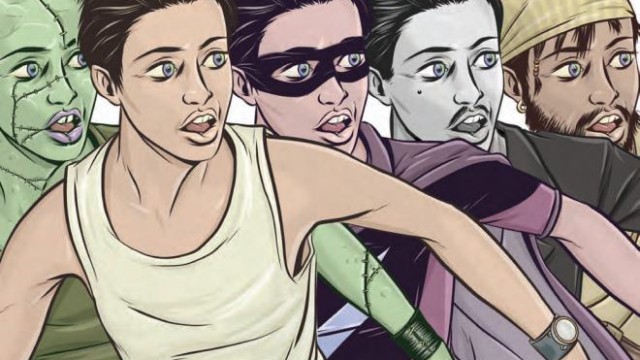 Iris is the perfect marriage of artificial intelligence and virtual reality, where citizens use contact lenses to see pop-culture inspired fantasies. However, when a programming heiress named Aldair gets a glimpse of life with her own eyes , she rebels with the help of a tech savvy teen from the streets named Bouy.

The second issue of this visually striking book that changes with every panel, Skinned, is out on June 18, 2014. With the array of cultural references and the ever changing landscape I got a chance to find out just where the inspiration for this wildly imaginative story comes from with writers Tim Daniel & Jeremy Holt.

Jessica Boyd: This book breaks a lot of molds because it’s never restricted by it’s location and surroundings. Because the upper classes can often see whatever they want there is a constant shift in visuals. How did you and Tim Daniel decide you could do this without losing the audience? Was there a lot of experimentation with the designs?

Tim Daniel: In terms of tracking the characters despite their ever-changing appearance all the credit goes to artist Josh Gowdy for doing what seemed to be the near impossible, and which he’s made look easy really. I don’t think there was much experimentation really but we did start with the more ambitious notion that every panel would be POV from a specific character and therefore a skin unique to that character’s perspective. That was just far too gnarly to execute. So we went with something “close enough”.

Jeremy Holt: I have to completely agree with Tim on this. Having joined the project later on, Josh had already started working up skin designs that Tim was sharing with him. Seeing Josh’s impressive abilities, I felt confident that he’d be able to illustrate just about anything that me and Tim could think of.

JB: There is a classic 1980s feel to this story with the boys meets girl from different worlds. Of course in this second issue there are direct art references to Breakfast at Tiffany’s and Michael Jackson’s Thriller and many other movies. What were some of your influences?

JH: The visual influences within each script play less to a specific time period and more to a specific theme. With that being said; what’s more classic than 80’s teen movies? I was 8 by the time that decade had ended, but the impact of those films was passed onto me by my older sister. Now that I think about it, I’m surprised we haven’t thrown in a Princess Bride reference…

TD: I’m old – at 46, I actually experienced the 80’s as a teenager and there’s certainly a lot of visual queues in Skinned hailing from that era of entertainment. Issue #2 has at least 16 distinct skins called in the script and many are from the 80’s – John Hughes films factor heavily in this issue. Once again though, Josh really shines as he’s been able to evoke familiarity without infringing on any particular property.

JB: The main character, Buoy, seems to have an extensive knowledge of how they system, IRIS, works. Are these just street skills garnered over time or is there a bigger mystery involving his background?

TD: Buoy is really Jeremy’s creation. He imbued his character with talents and skills that make him really slippery and surprisingly resourceful. I think early on Jeremy talked a lot about the Aladdin “street urchin” – if I recall correctly…

JH: That’s right, Tim! My inspiration regarding Buoy’s background stemmed from two things. 1.) Tim’s concept of arranged marriages and the clear class system that runs throug cView City. 2.) My love for technology. Utilizing my knowledge/skills as an Apple Certiified Computer Technican, I thought the merging of old world traditions with emerging technology was ripe for a hacker to play within. It also allows our main character to be very active throughout the story.

JB:How much do you and Daniel collaborate on the artistic look of this book? There are so many different images happening throughout. Do the appearances of the people, what they are seeing, is that a commentary about what is happening in those panels, or just pure fun?

TD: Every skin has a subtext – there’s no “giveaways” or “freebies” with maybe the exception of the default setting – which appears in the form of the haptic suits – the technology responsible for projecting the skin onto the surface of the body or building. By example, in Issue #2 we see a Warriors-like skin appear and if you know that dusty old film about outlandish gang warfare then you get that Buoy has just entered a rough part of town so-to-speak where every character is in real jeopardy. A reader does not have to necessarily get that reference because even without understanding the placement of the skin and it’s subtext, the panels are visually arresting and the action is still clearly delineated. If there is a purely for fun aspect to the skins, that would be found in the easter eggs Josh has managed to sneak in everywhere. I found 3 major pop-culture icons on one page alone. Also pretty cool is the modern garments Aldair and Buoy wear starting in Issue #2 are actually real and can be purchased from Beastwares.com. Designer PhoenixZoellick has created a line of clothing that is simply retro-futuristic and those “ads” at the back of each issue provide the web address to purchase clothing. This is like cosplay heaven people!

JB: Between class-warfare, teenage rebellion and the dangers of technology there are many potential themes that can be explored in this series. Is that intentional? Will they be delved into individually through arcs or constant presences throughout the series?

JH: I don’t think we could have told this story successfully if we approached it without specific intentions. However, with the specific themes that we’re exploring with susequent issue, we also wanted to leave moments open to interpretation. The topics you’ve mentioned are the exact ones we wanted to bubble to the surface, and will be a constant prescence rather than an individual examination.

TD: Everything in that regard is intentional but what we don’t control and what matters most is – what theme is clearly the most dominant one. That is a matter of perception on the part of the reader. I mean, I see this as a love story, yet to another reader they might easily hold onto the idea that Skinned is a cautionary tale about the over-reliance and dependence on technology. And goon on them if they choose to do so.

JB: Without spoiling it for people haven’t read Skinned yet, what kind of warning would you give about IRIS, the system that helps people change and interact in this world?… because lets face it, it moves to a whole new level of creepy in this issue.

TD: Technology is either weapon or tool – choose wisely how you wield it.

JH: Couldn’t put it better, myself.

JB: Who’s idea was it for the few word summaries at the beginning recap page for the first issue and the single word teases at the end of the issue? They do a great job of providing a fast hook.

TD: Team effort. Josh gave us some great material to work with – in particular the lens application diagrams. In designing the book you look for opportunities to add story-driven or story-supplementing value to every single page and certainly interior front covers, credit pages, recaps and even back covers have evolved greatly in the last couple of years. Ideally, you want to give the reader an experience that literally lasts from cover-to-cover.

JH: Tim is being modest. He’s a design wizard who is responsible for the beautiful interior cover designs. With each action packed issue, the brief recaps are mighty helpful.

JB: What is your elevator pitch thinking about trying Skinned for the first time?

TD: Wait, no one ever speaks in elevators and if they do they’re generally annoying. Occasionally, I stand opposite the direction everyone else typically faces so we’re all forced to stare awkwardly at one another. To break the ice I might say something like, “Hey, read Skinned. It’s a rad sci-fi romance thing like Ready Player One and Scanner Darkly and some Disney Princess movies.”Crap – I do this much better in pictures.

JH: “At its core, SKINNED is the story of two star-crossed lovers who manage to find each other in a city that has given its citizens the ability to choose from a multitiude of relatities via ocular lenses. Their struggle: Never losing sight of each other in this ever changing landscape.” Not my most condensed elevator pitch, but then again SKINNED is not your typical high-concept mashup.

Skinned is $0.99 on Comixology. You can also subscribe to the monthly series here Issue #1 is already available and issue #2 is available June 18, 2014.