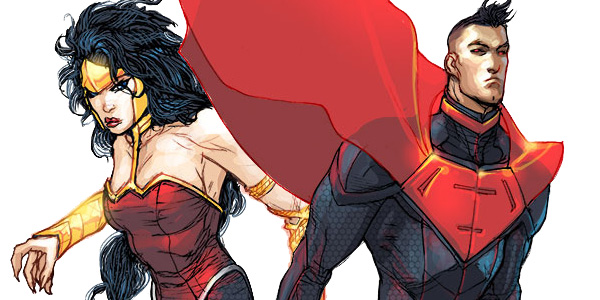 There are few creative teams that elicit such joy from their longtime fans whenever they reunite than the triad of Keith Giffen, J.M. DeMatteis and Kevin Maguire. First together for the massively successful Justice League International relaunch in the wake of DC’s mid-eighties reboot, the team is at it again — this time around looking to the future, literally! With the just-announced Justice League 3000 ready to hit solicits for October 2013, I got a chance to bounce around some thoughts with Giffen and DeMatteis on what we can expect to see coming our way this fall, and what it’s like to work together again on such a high profile title! 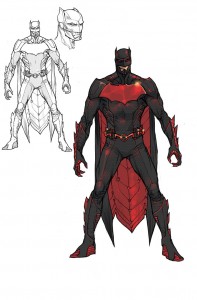 Matt Santori: Before we even get into the new series and what it means for the DC Universe, I have to ask: what’s it like to have the whole gang back together again? What’s the same and what feels different this time around?

Keith Giffen: Doesn’t feel much different than it ever has. I plot too little, Marc writes too much, Kevin draws whatever he damn well feels like… you know, the usual.

J.M. DeMatteis: What’s amazing to me is that it never feels all that different.  Keith and I hadn’t worked together since we did Booster Gold, then, a few months back, we started in on Larfleeze and we didn’t miss a beat.  We haven’t worked with Kevin since our short Metal Men run a few years back, but here we are on JL3000 and it’s like no time has passed.

There’s something special that happens when Keith and I work together and that gets magnified when Kevin comes aboard.  What’s weird, of course, is that we never chose to work together in the first place:  Andy Helfer, our brilliant JLI editor, was the one who saw something in the combination when he hired the three of us to work on the 80’s League.  Which leads me to believe that Andy is either psychic or a wizard. 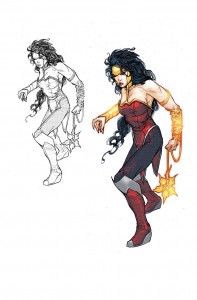 MSG:  Speculation has been swirling online for months about the next iteration of the Legion of Super-Heroes mythology. What can you tell us about the Justice League’s connection to what we’ve seen before with the 31st century’s other super-team?

KG: Nothing. No connection. Zip. Zero. Nada. And, while I’m at it, that ain’t Wally. There are no Legionnaires in the book. None. This is not the Legion. It’ll be back, of that I’m sure, but it won’t be back because of us or the JL3000 book.

That said, I did take the name Fatal Five just because I really like the sound of it. JUST the name. Such a hypocrite…. I KNOW!

JMD: This book has no overt Legion connection.  Our focus is on the Justice League and the evolution of our characters.  Fresh start, square one.

MSG: Are you drawing on previous ideas of the 31st century for your environment or looking to establish a new vision for the future of… the future?

JMD: Very much a new vision.  And our 31st Century really isn’t like any version you’ve seen before.  Keith has put a lot of thought into this and he’s come up with some wonderful concepts that we’re all building on and playing with.

That said, it’s the Giffen-DeMatteis-Maguire approach, so, yes, there will be humor, there will be bickering, there will be superheroes acting less like spandex gods and more like real people in all their annoying and admirable glory. 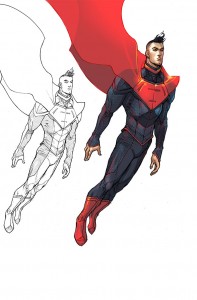 MSG: The team that’s been teased is a very iconic grouping of Justice Leaguers, but there’s no question one of your hallmarks is the ability to humanize DC’s icons. Beneath the masks, how will the team be relating to their respective legacies and each other?

JMD: Well, that’s the fun of the creative journey, isn’t it?  No matter how much we may have planned out in advance, we never really know how these characters will relate till they hit the page.  I start writing dialogue and, before I know it, these guys are all talking to each other, saying things I’ve never expected, leading us in directions we never planned.  So, there’s a good chance anything we say about our conception of the characters will probably be wrong because the characters will end up contradicting us!

MSG: Superman has obviously had the strongest connection to the 31st century previously, having served as the inspiration for a generation of young heroes. What place do Batman, Wonder Woman, Flash and Green Lantern have in this future that’s similar or unique?

JMD: You’ll have to read the book to find out.  As for Superman’s connection to the 31st Century, that was a different continuity and a different Superman.  This is virgin ground and we’re building totally new structures. 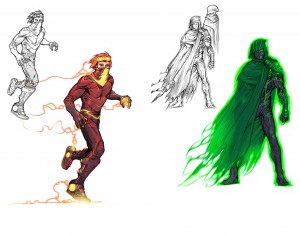 MSG: What can you tell us about the opposing forces the Justice League will be facing in the new series?

KG: Just because they’re called the Fatal Five doesn’t mean you know who they are.

JMD: Let’s just say that the 31st Century isn’t exactly a shiny, hopeful place.  Things are a mess.  And there will be threats—some familiar, some totally new—coming at the League from all directions.

KG: We’re going to spend a lot of time lying to you.  I mean REALLY lying through our teeth.  When the truth comes out… it ain’t gonna be pretty.  As a matter of fact, it’s probably the darkest place we’ve ever gone.

JMD: The three of us are all incredibly excited about this project.  We get to play with the five major icons of the DCU, make them our own and set them loose in a future we’re building from the ground up.  When it comes to superhero comics, it really doesn’t get any better than that.

I’ve often said that I’d work with Keith and Kevin on just about anything—the book doesn’t really matter, the creative chemistry does; but on this book we have a perfect vehicle for what we do.  We’re just getting started but we’re already having a great ride.

MSG: Thank you so much, guys! As always, I’m thrilled to see where you take us!

Besides launching Justice League 3000 for DC Comics in October 2013, the classic team of Keith Giffen and J.M. DeMatteis have reunited to present the Orange Lantern Larfleeze monthly in the New 52! Check out our interview with J.M. on that series, just out on the stands last week to great acclaim!