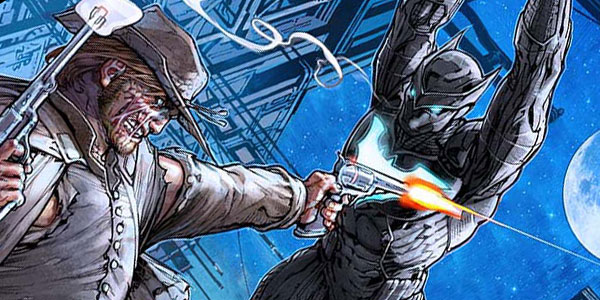 Justin Gray and Jimmy Palmiotti are two of the hardest working men in comics today, writing numerous independent one-shots and graphic novels, running a Kickstarter for Weapon of God (currently in its last hours), the digital first series Ame-Comi Girls, and helming not one, but two ongoing series for DC Comics’ New 52: Batwing and All-Star Western. The guys once again agreed to chat with Comicosity about their work on Jonah Hex, his recent meet-up with the man in Gold himself, and what’s coming up in the lawman’s future — quite literally. 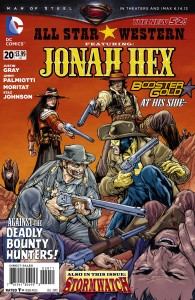 Matt Santori: Thanks for taking time out of your insane schedule, guys! So, I have to start off with the obvious question: Why Booster Gold?

Justin Gray: Because he’s Booster Gold, time traveling hero and a great foil for hex. Plus he affords storytelling opportunities otherwise unavailable to us.

Jimmy Palmiotti: We were asked to do something special that month to the book and Dan DiDio came up and asked if we had any interest in maybe featuring Booster in the title, and our wheels started spinning. Dan is a man of many crazy ideas and we look forward to them. He is always thinking how to shake up things in the books. Thank God for his wild energy. This idea was…gold.

MSG: Jonah Hex has never been so entertaining as in this series, being played off against erstwhile partners like Booster, Talulah Black, or Amadeus Arkham. What goes into choosing the best foil for Jonah and can we expect to see more characters filtering in and out of Hex’s life?

JG: This summer Hex is going to be played off something other than a traditional character. The foil this summer is modern society and how he does or does not fit into it. This is an exciting time for fans of All-Star Western because we’re taking chances and pushing Hex through situations that are both familiar and completely alien. For the first time in the seven years we’ve been writing Hex, he is going to face something that forces a change in him.

JP: The thing about Jonah that is fun is that no matter what kind of madness we toss him into, he does and acts the only way he knows how. With the new issues, having him in Gotham and dealing with Batwing makes for some crazy experiences. What we do after that will keep people on the edge of their seats through winter and fall. There will be new characters, ones we all know and love and then some madness bookmarking his visit to our time period. This will be the book that, like Game of Thrones, you never know what is going to happen next. 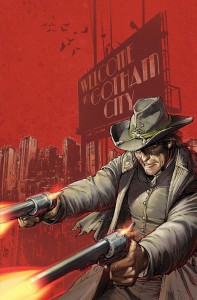 MSG: The decision to move Jonah into a decidedly “Eastern” locale like Gotham City seemed to really ground him for a lot of readers, but no location is as familiar to all of us as 2013. Why bring Jonah forward in time and what challenges did that displacement offer in still portraying him as the baddest gunman around?

JG: The biggest challenges are for Jonah Hex confronting the realities of our modern American culture. While Gotham might have presented a fish out of water atmosphere to the book, we’re going to see Hex stare into a future he was once fighting to protect in some capacity. There’s a wealth of story opportunities and we’re hoping we can gather enough people on the run to really allow an exploration of how a man like Hex interprets the world.

JP: The flip side and business side of that is that we need to get the numbers up on the title. We have always been in a dangerous zone with the book, but we are gaining new readers month after month and to keep getting new people to try the book, we have to present new ideas and situations that make the title a WTF title each and every month. I think most comic series have become rather lazy and a lot of writers have forgotten just how entertaining and crazy a comic book can be. We are going to test the limits to what we can get away with. Worst thing you can do as a writer is not to challenge the reader. No one should ever be able to figure out what will be happening next.

MSG: It’s been recently teased that Palmiotti/Gray-worlds will collide in an upcoming issue with the guest appearance of your new Batwing character! I think it’s safe to say two characters being paired have never been so opposite before. What can we anticipate in their clash and how does the experience carry back over to Batwing’s own title? 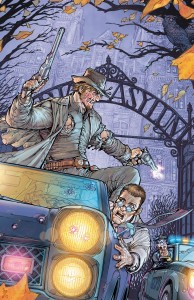 JG: The good news I suppose is that we’re not forcing you to buy both books just to follow the story. Hex and Batwing, at least at this point in time, meet only in All-Star and it felt like a fun opportunity to kick off Hex’s introduction to the modern DCU by having him face something that looked like a monster.

JP: We are writing both books, so this is easy and fun for us. If we were writing Wonder Woman as well, she would be in it too, and we would have Jonah flying the invisible plane over the Grand Canyon…but we don’t. I bet a lot of you are happy we aren’t.

MSG: All-Star Western is the last anthology-style title DC has, for now, hitting the shelves this fall. How has the experience been for you two in evolving this world of the 19th century DC Universe, and where do you plan to take it from here?

JG: Moving forward our primary focus is on telling the ongoing tale of Jonah Hex’s and hopefully crafting a book unlike any other in the line by virtue of the lead character. There are types of stories that can only be told in the pages of All-Star and we’re excited to have the opportunity to keep telling them.

JP: Change is a way of life for us.  Experimenting with new ideas is in our blood, so it’s been great. Look at this title and then stop by our website at Paperfilms.com and see that we are always trying to do new things. One day we hope to have a small pocket universe of spinoff characters going on, but that day will only come when more people start to give this title a chance. Imagine a Tallulah Black ongoing… a Barbary Ghost mini-series and so on.  Until then, we continue to fight the good fight and give everyone the best work we can. A lot of sites have said this is the best book DC puts out on a monthly basis, and it seems paying them off to say these nice things is really starting to work to our advantage. One day we will have enough money to buy a million copies of our own books, but until then, we need each and every fan we can get to support the title. 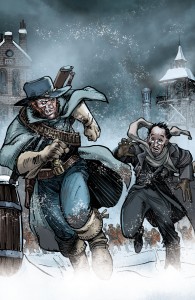 MSG: All-Star Western has also been uniquely blessed with an absolutely consistent main creative team for its entire run, between you two and your primary artist Moritat. How has the working relationship grown over the two years on the title and what do you think Moritat brings to Jonah Hex that no other artist can?

JG: Like the rest of us. Moritat has evolved with the book, embracing all of the radical changes and shifts in tone, style and location that we’ve thrown at him. He’s had to shoulder a huge workload and you should know he’s a research junkie so All-Star is an all-consuming beast at times. That said the combination of Moritat and colorist Mike Atiyeh give us a unique tone and look for the book.

JP: We are blessed with two talents that love the work as much as we do and are proud to put out one of the most consistent titles in comics today. Both of these guys are doing the best work of their career and it shows in each and every page they do. We got really lucky with them.

JG: I just hope people that might not normally read a western or a genre that they have preconceptions about give us a try. This is a very unconventional book and might surprise a lot of people. The early knock on Hex was that he’s a wild west Punisher, but the reality is we’ve spent nearly eight years building a character that is both incredibly simple and incredibly complex at the same time. Yes there are guns and a cowboy hat, but there’s fighting, drinking, sex, violence, humor, superheroes, insane clowns, talons, owls, stolen cars, mutants. This list goes on.

JP: Expect to be shocked.