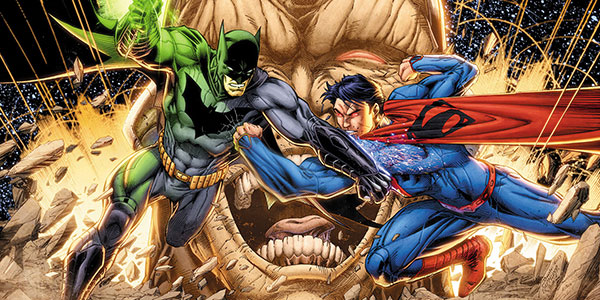 Greg Pak has the admirable distinction of helming a book staring the two biggest heroes in the history of the DC Universe: Batman/Superman. He took time during New York Comic Con to sit down with Comicosity and talk about what’s ahead for this awesome dynamic duo, including new surprises in both the story and the art. 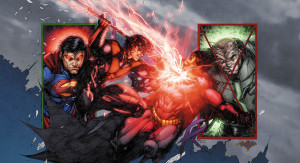 Alison Baker: Greg, you’ve said that the Earth 2 elements of Batman/Superman were not your idea, yet they’re some of the boldest parts of the book. Has writing across the two worlds been really challenging, or do you feel like you’ve been given extra toys to play with?

Greg Pak: It’s exactly both. I mean, I did improv comedy for many, many years, and improv is all about building things with other people’s suggestions — and building together. I love comics for that. Comics is a collaborative art. I love working with creative editors who have cool ideas, and I love being able to take different ideas and work with them and build something I never would have come up with just on my own. 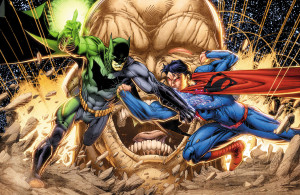 I want to tell the story of these two young heroes challenging each other and driving each other crazy, and this idea of throwing them into Earth 2 amps that up a ton. Now they’re not just challenging each other, they’re challenging the future versions of themselves. All four of those heroes end up having to question his whole being, basically. That kind of stuff is fantastic. It’s a thrill to work with. And it is a big challenge, but that’s why we write. Challenges are good. Challenges make us better. I had a ton of fun with it.

AB: With that emotional story about Bruce and Clark, what do these men need to learn from each other before they can become the men that they meet in Earth 2? Do they want to become those men?

GP: Those are the exact questions that I ask, and the questions I hope the story makes people ask. It’s very easy to look at the story and say ‘Oh okay it’s about these two cocky guys who are gonna learn that they need to work together, to become the awesome guys they meet.’ But, maybe it’s not that simple. They’re facing a threat that may require more – that maybe the younger, crazy cocky guys are better set up to deal with. I’m going to leave that open. I think that’s the fun thing for this book – to look at these two different heroes and see them grapple with each other, and with themselves, trying to figure out the best way to do the things they have to do. 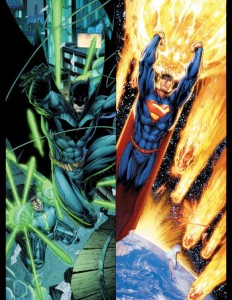 I think it’s compelling because in life, it’s like that. When I was 19 years old I thought I knew everything there was to know. Clearly, I didn’t. We need people to challenge us, and we need those situations that force us to think about things differently. And there are other times when everything falls apart and we have to rethink everything from the ground up. These two heroes provide challenges to each other, but can also help each other. I think that’s endlessly interesting.

AB: In the first arc, it’s almost been a Trinity book, because Wonder Woman has been helping them out in Earth 2. Will her prime Earth counterpart be making an appearance? Or does other heroes appearing distract from that core relationship between Bruce and Clark that you’re trying to focus on?

GP: Oh, no. Starting with issue 5, we’ll be back in current time, because our story is set in the past right now for issues 1-4. So starting with 5 we’re in the current time in the DC Universe. We definitely will be seeing more of the supporting cast of the two different characters. I’d like to build a supporting cast for this book too — specifically for this book. Like, when the two of them get together, there are going to be certain characters who are helping them out. I think that’ll be a fun thing. In fact, we’re reintroducing Toy Master to the DCU. I loved the way Jeph Loeb played with him in the original Superman/Batman, I think they called him Toy Man back then. 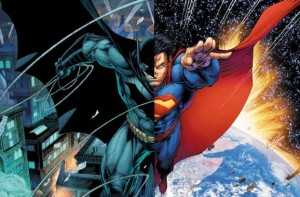 AB: Yes! I didn’t realize he had a new name.

GP: Yeah, we’ve given him a new name now. He’s this Japanese kid who’s great with toys. We’ve given him all this crazy stuff to play with. In our new version, he’s Toy Master, he’s a little bit older, he still has a lot of fun doing what he does but he’s going to get into trouble and he’s going to get everyone else into trouble at the same time. Brett Booth is drawing that arc and it’s hugely fun. Brett has a great sense of humor and is really going crazy with it. He also knows how to deliver the huge sense of danger that’s involved here.

AB: Will you change the way you tell the story with the shift from the almost dream-like style of Jae Lee to Brett Booth, who is a more straightforward superhero artist?

GP: We’re doing some really fun things here. The whole book is sideways. All the pages will be horizontal, which is kind of crazy, because when you get to a double page spread you get this enormous vertical image. We’re having a ton of fun. 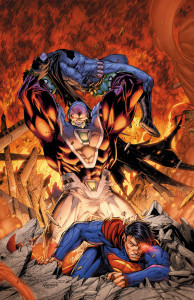 I remember when we first started, Eddie [Berganza, editor of Batman/Superman] emailed us and said ‘What do you guys think about doing this book horizontally?’ and I was like ‘That sounds awesome!’ but Brett said ‘I don’t know, that’s crazy, but let’s do it!’ and then once he was about three pages in, he was like ‘I wanna do ALL  the books this way!” He’s got so much enthusiasm, and he’s having so much fun with it. It’s really a kick in the pants. I think that there’s some humor in this book that Brett’s just eating alive, and you’re going to see some stuff you’ve never seen in a Brett Booth book, probably, that I think is just incredibly fun. There’s also a huge amount of danger, and he’s great at that. He drew the Doomsday book that I wrote, and made that super scary.

I love it also because Jaws is one of my favorite movies of all time. It’s one of the scariest movies I’ve ever seen, and it’s also one of the funniest movies I’ve ever seen. When you can play with both of those things at the same time, when you’ve got an artist who can handle that, that’s amazing. Whenever I’m working with a new artist, I start to think in their imagery, you know what I mean? It’s all being written for Brett in a way.

Same thing with Jae. When Jae was on the book, it was just a perfect match. There was a dream-like quality going from our world to Earth 2, and we wanted to play on this question of ‘where are you’ and everything. He does such a beautiful job of creating that atmosphere, and there’s a kind of fog he’s able to layer in there.  The coloring that June Chung does is a huge part of that too. The art totally just matched that story. In a similar way, Brett’s art is perfect for this new story arc.

AB: To satisfy my own curiosity, how closely does this tie in to the other team books, in terms of this story being seeded throughout? 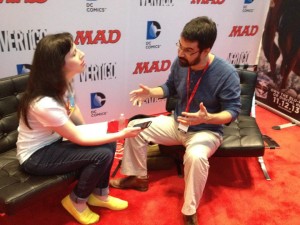 GP: You know, we just had a huge meeting with Charles [Soule, writer of Superman/Wonder Woman] and Scott Lobdell [writer of the other Superman books] and it’s great, because we’re all on the same page. We’re developing some big stuff, and we’re definitely seeding things now that are going to pay off in a big way later. They’re paying off in each other’s books as well. It’s very exciting to be working with writers like that. So there’s stuff that I’m setting up that Charles is going to play with and – we have a plan!

AB: Thank you so much for your time! Is there anything else you’d like to say to Comicosity readers?

GP: Well first off, thank you. I’ve checked out the site, and you guys have been very kind to me and the stuff I’m working on. So, thanks a lot. Also, Action Comics – I start writing that with issue 25 in November. Aaron Kuder is drawing. If you like what you’ve seen in Batman/Superman, definitely check out Action Comics 25. It’s gonna be crazy. Like I said, all these books are working together and building some pretty huge things that have big emotional ramifications. A lot of fun stuff is happening with a lot of different characters. So thank you!

Greg Pak’s Batman/Superman is published monthly by DC Comics. Action Comics #25 will be available in November.

Thanks to Jessica Boyd for her assistance in this interview.