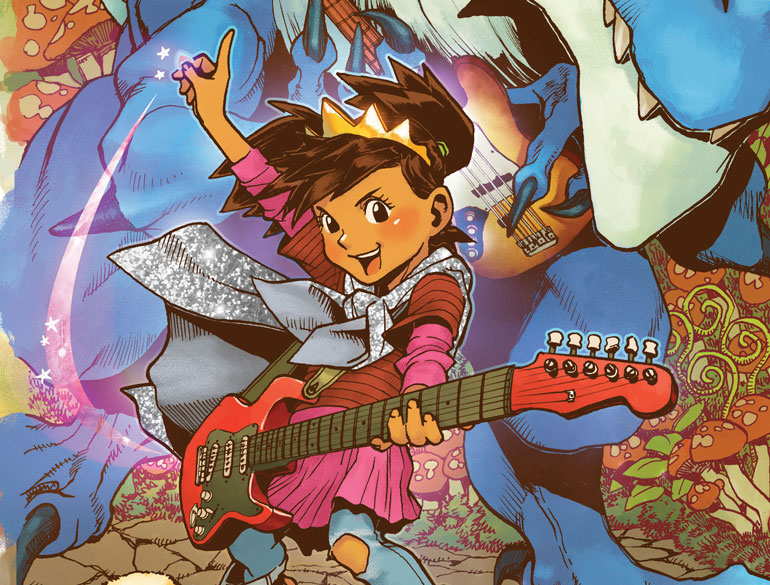 Greg Pak has been busy this past year: from showing us what our favorite weather-wielding X-Men leader does in her spare time in Storm, to giving new spins on familiar heroes in Batman/Superman, to weaving an alternate history adventure tale in Turok: Dinosaur Hunter.

Now, Pak shares with Comicosity about his latest creator-owned project: a children’s book available through a new Kickstarter (which can be found here).

Draven Katayama: Greg, thanks for sharing with us about The Princess Who Saved Herself. You’ve teased that PWSH is based on a song by singer-songwriter Jonathan Coulton. Tell us more about the genesis of PWSH and its characters. 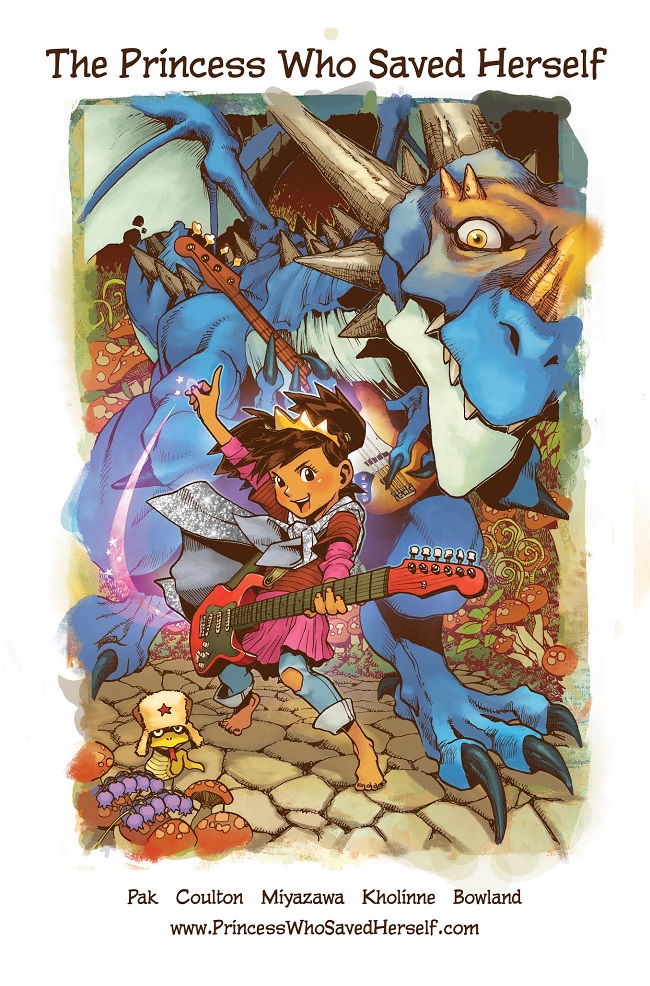 Greg Pak: Two years ago, Jonathan and I launched a Kickstarter for Code Monkey Save World, a graphic novel based on characters from his awesome songs. The campaign went so well we were able to add a bunch of stretch goals, including a digital children’s picture book based on Jonathan’s classic song “The Princess Who Saved Herself.” Now we’ve finished that digital children’s book and have delivered it to our backers. And we’re launching a new Kickstarter to make beautiful hardcovers of the book!

The Princess Who Saved Herself tells the story of Gloria Cheng Epstein Takahara de la Garza Champion, a princess who lives in a pink and purple castle, eats cake, has a pet snake, and plays rock ‘n’ roll guitar all day long. Hijinks ensue when the classical-guitar-playing witch who lives next door decides she hates Glory’s music.

DK: You’re reuniting with your collaborators from Code Monkey Save World, Japanese Canadian artist Takeshi Miyazawa (Runaways, Ms. Marvel) and Indonesian colorist Jessica Kholinne. What was the creative process like working on PWSH with them, and what are some ways they shaped the characters? 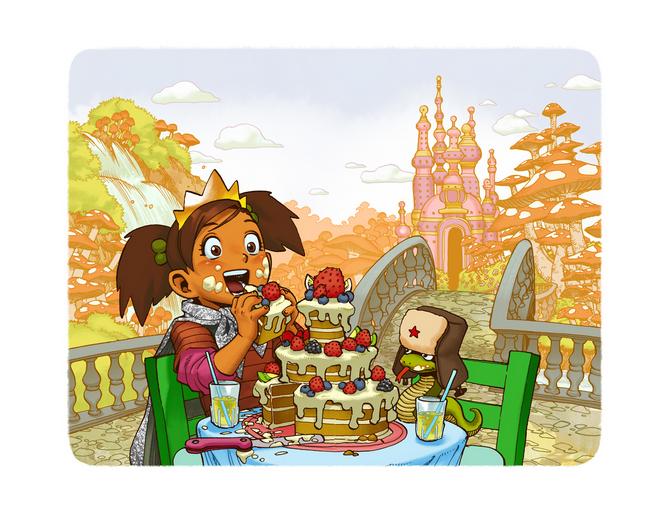 GP: Tak, Jessica, and letterer Simon Bowland are a total pleasure to work with. We made the Code Monkey book together, and they just get it. Tak’s character design, sense of humor, and subtlety of expression always blow me away. He’s one of those artists who just lives in my head, somehow. He gets what I’m trying to do and invariably the designs and pages he hits me with feel just perfect. Tak also knows how to draw people who look like people, who feel real and contemporary and relatable. He surprised us with the queen’s hipster look, for example, and we loved it.

Jessica has a great feel for the right colors to make Tak’s art pop, and brought a great watercolor-like style to this book. And Simon found just the right font and look to complement the art and the vibe of the book. 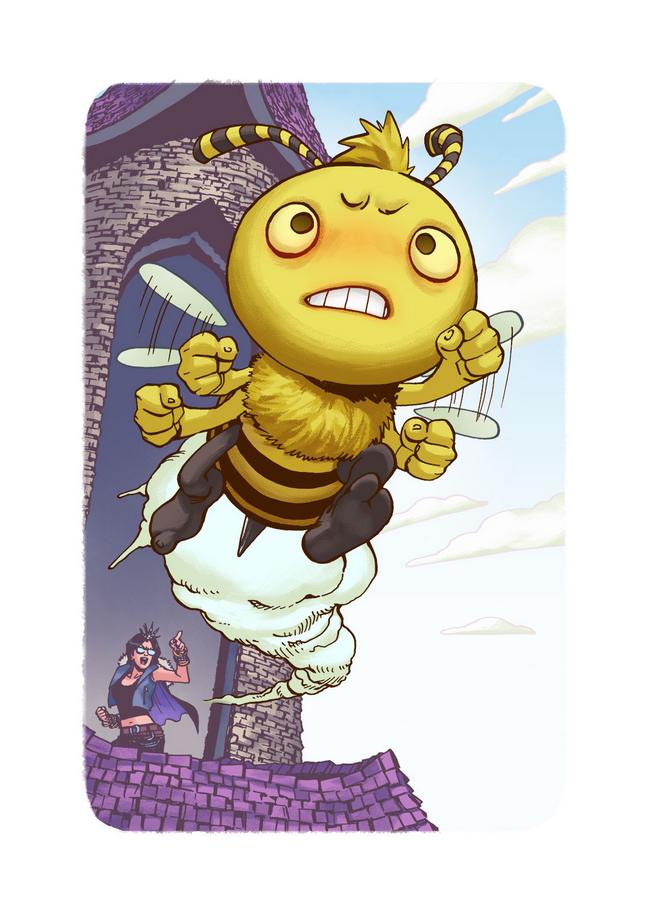 DK: You’ve written for a wide variety of spheres, including feature films, short films, and comics. What were the unique challenges of tackling a children’s book?

GP: I’ve been working on a few different children’s book projects in secret for a while now, but PWSH is the first to actually see the light of day. It’s a huge amount of fun to work in this format and I’m eager to do more.

Probably the biggest challenge is the economy of language of a picture book. I come out of comics and film, which already use fewer actual words than novel writing, for example. But a picture book is even more stripped down. It’s essentially poetry, which makes particular sense in this case since the story is based on the lyrics to Jonathan’s song. So embracing less-is-more becomes important.

I also went through a few drafts just cutting back on the number of images on a page. I spend most of my time writing comics, where our bread and butter is visual storytelling of sequential action. A picture book is very similar, but it’s really not the same. I realized I didn’t always need to show multiple stages of a given action the way I might in a comic book. I probably cut out about half of the images in the manuscript during the course of editing.

Learn more about The Princess Who Saved Herself and the creative team at their Kickstarter. 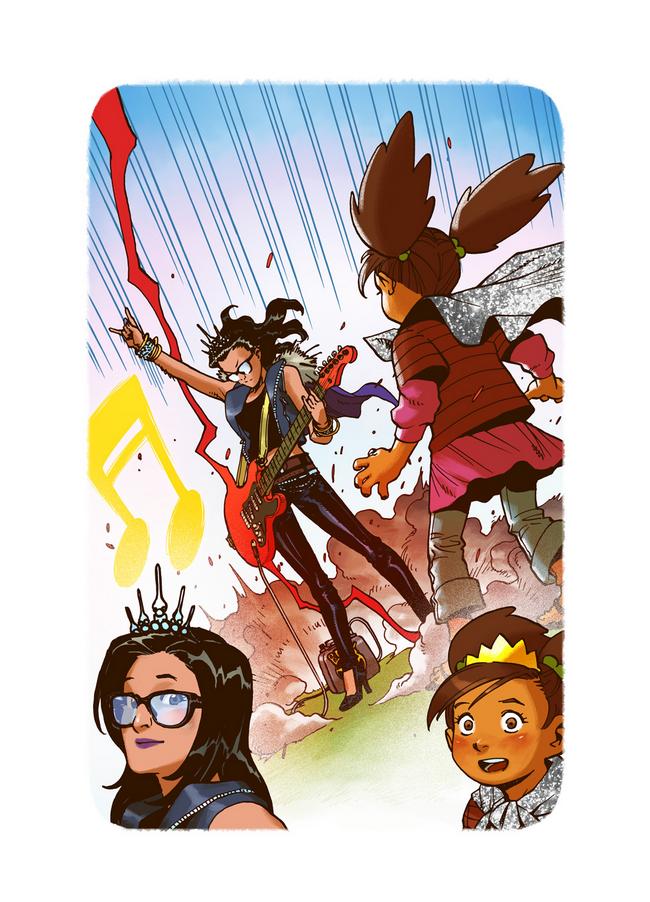 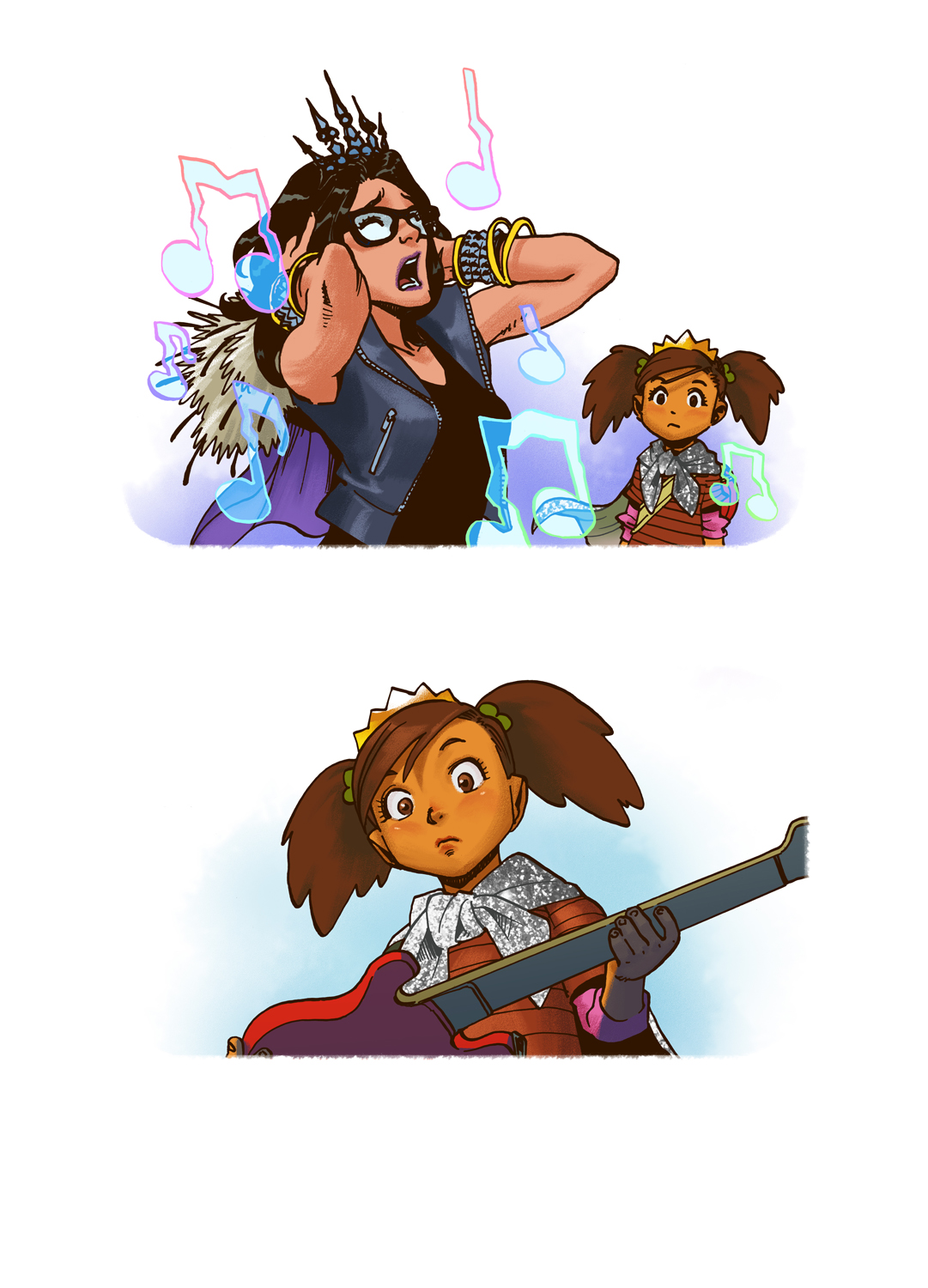 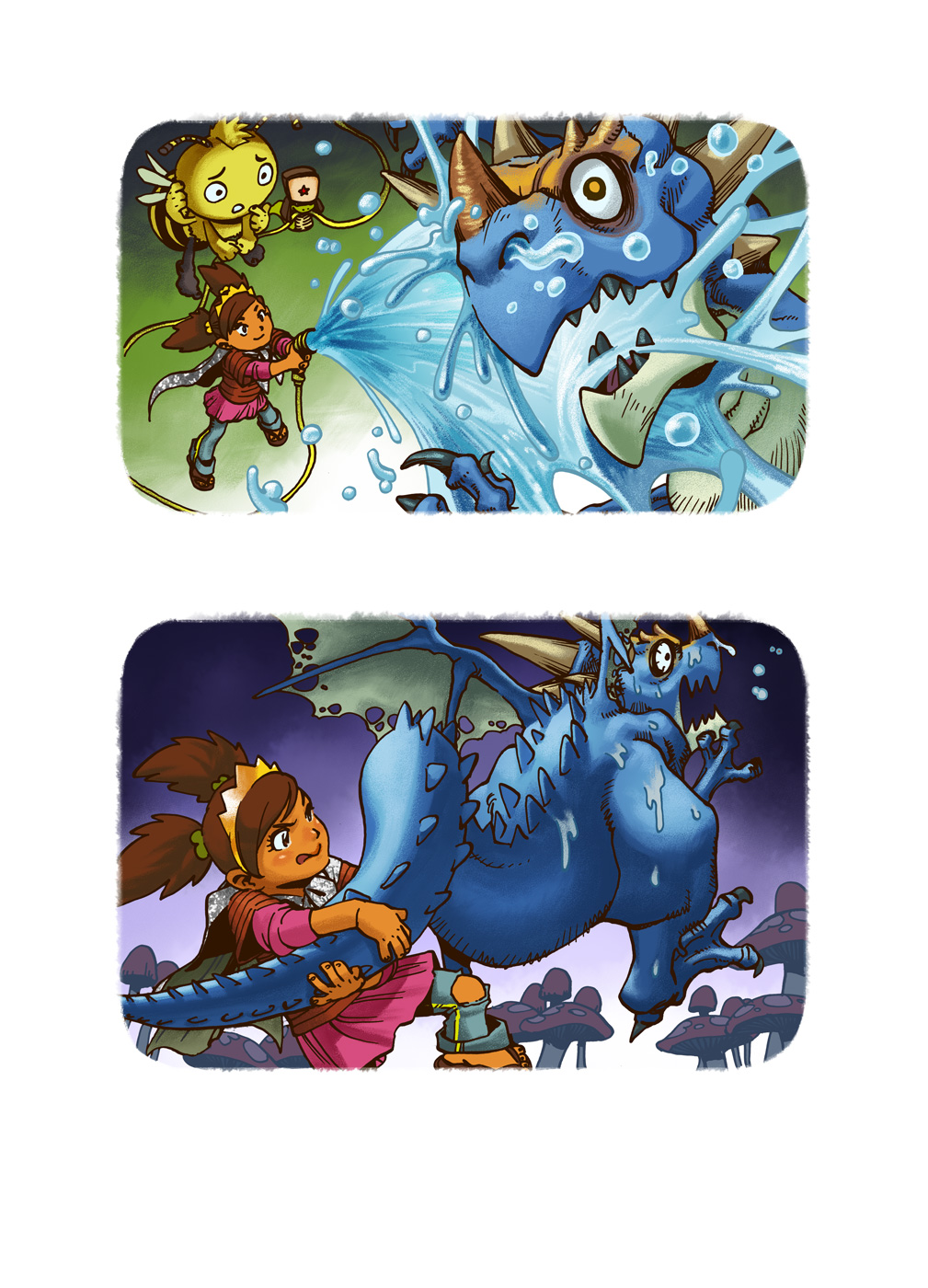 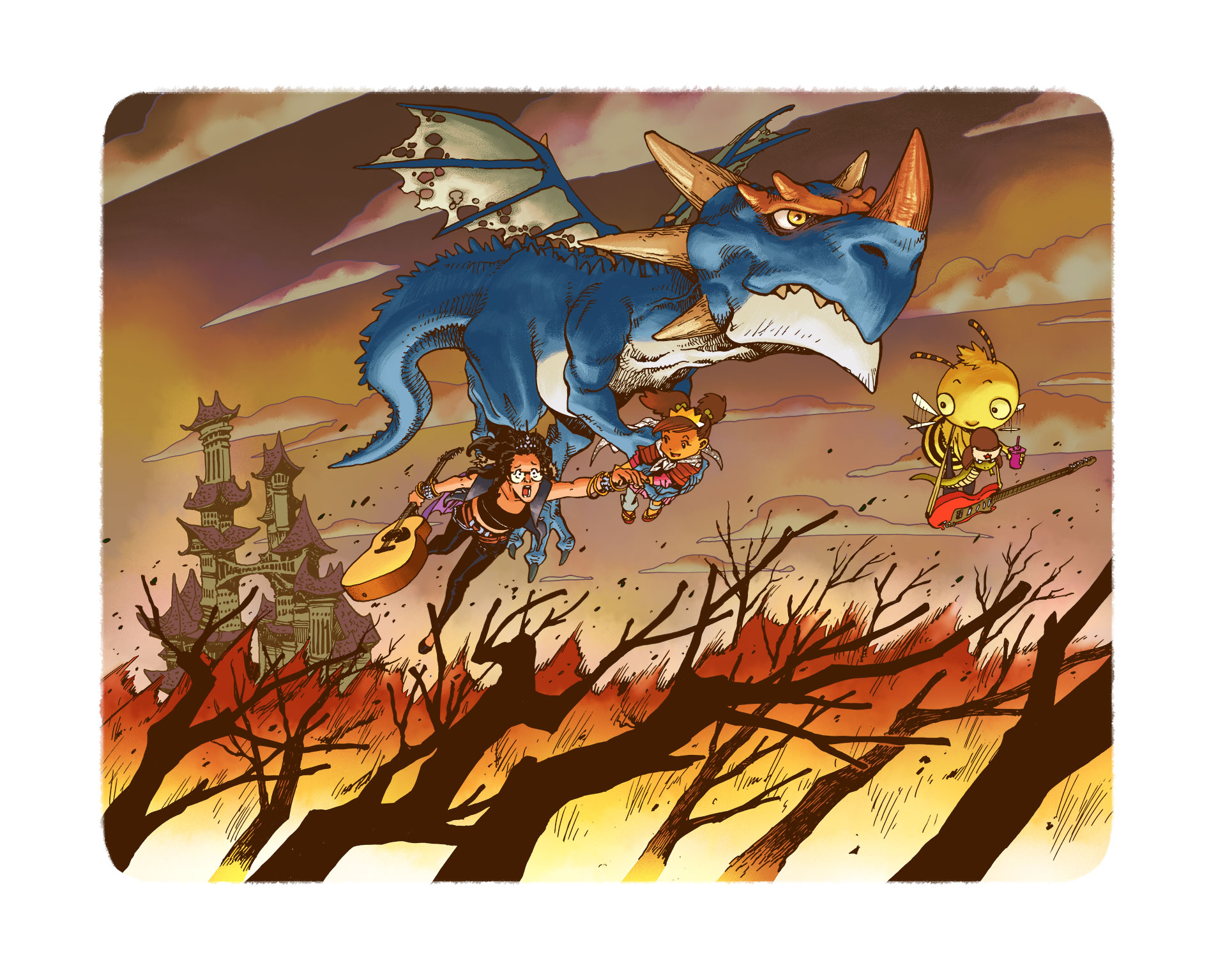