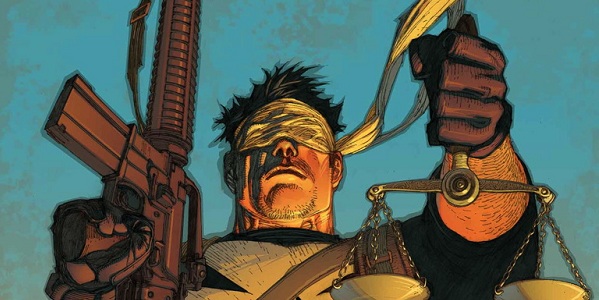 The baddest vigilante in the Marvel Universe has always been the Punisher. His crimes are many, his body count immense, and it is time for Frank Castle to take the stand. Marc Guggenheim is the man to bring the infamous crime buster to court in the upcoming Punisher: Trial of the Punisher from Marvel Comics. Guggenheim was kind enough to take time out of his scheduled to discuss how the book came to be and what readers can expect when Frank heads to trial.

Aaron Long: Lets start at the beginning…how did The Trial of The Punisher come to be, and what drew you to the project? 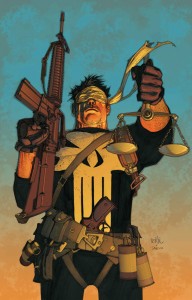 Marc Guggenheim: Well, it’s really the story of how I broke into comics in the first place. Several years ago, back before I wrote for Marvel and when I was writing on Law & Order, my manager introduced me to Ruwan Jayatilleke at San Diego Comic Con. I’d written a two-issue Aquaman story for the Distinguished Competition and that had so set the comic book world on fire that… absolutely nothing happened for me in comics for about a year. But Ruwan responded to the Aquaman issues and passed them on to Axel Alonso. Now, this was (way) back before Axel was Marvel’s EIC. Rather, he was editing, if my memory is correct, many Marvel Knights titles. Among his responsibilities was to edit standalone, extra-sized — 36 pages — stories featuring either Wolverine or Punisher. These stories were going to be marketed under the branding “Long Shots”.

To make a long story short, I pitched Axel several story ideas for both Wolverine and the Punisher. One of the stories was entitled “People vs. Castle” and it’s essentially the story that “Trial of the Punisher” became.

Axel liked several of my pitches, if my self-serving memory is correct, but “People vs. Castle” was his favorite. From there, he sent me off to script and we were off to the races.

AL: Can you discuss the situation that leads to Frank Castle being on trial? His sins are vast, but what brings him to court in this series?

MG: Surprisingly, he turns himself in. The story begins with him casually walking into a New York police stationhouse carrying a duffle bag. He sets the bag down and opens it up. Inside is the dead body of an Assistant District Attorney. Frank tells the police on duty that he killed the A.D.A. and is turning himself in. Things get wild from there…

AL: Can any courthouse truly contain The Punisher unless he chooses to stay there? Is Frank somewhat pacified in this series? 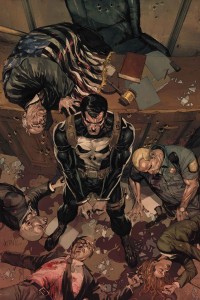 MG: Both great questions. I don’t think it’s spoiling anything to say that there’s a method to Frank’s madness. The fun of the story is trying to figure out what, exactly, Frank has up his sleeve. This is something that I think is very unique for a Punisher story. Typically, Frank is a blunt instrument, a force of nature. Punisher stories don’t typically call for Frank being devious or calculating. We rarely get a chance to see how tactically brilliant he is. This story is one of those rare instances. If everything goes according to plan, Frank remains just a few steps ahead of the reader throughout the story, until just the last few pages.

Your second question points out one of the challenges I faced in writing this story: Namely, if Frank is on trial for the majority of the story, wouldn’t that make Frank very passive? Wouldn’t it mean that I’m wasting artists like Lenil Yu and Mico Suayan on a lot of talking heads? Obviously, these were challenges. I deployed a variety of strategies to keep the narrative engaging and visceral. One of those strategies is that we’re flashbacking a lot over the course of the testimony about Frank’s exploits. It’s a chance to not only take Lenil and Mico off the leash artistically, but also give the reader a sense of how the larger Marvel Universe — the mobsters and super-heroes — view Frank. There’s an element of this story that basically has Frank attending his own wake. All the while, however, we see Frank slowly laying the pieces of his plan into place. That’s what keeps him from being, as you said, “pacified.” His mind is always at work during this story. He’s always doing something. The difference between this story and a typical Punisher story is that what he’s doing isn’t — at least at first — violent. Rather, it’s cerebral — which, I think, is something people don’t expect from Frank but is a quality he’s more than capable of. The man is a brilliant tactician. And this story showcases that rarely seen side of the character.

AL: Many heroes have had run ins with The Punisher in the past. Will anyone be appearing as character witnesses for and against the most ruthless vigilante in the Marvel U?

MG: I didn’t want the story to turn into a roast, with a rotating phalanx of super-heroes testifying against Frank. To that end, I focused on the character I think has the closest connection to Frank: Matt Murdock a/k/a Daredevil. Apart from their shared history, I think Matt has a unique perspective to offer — particularly in this setting — since in addition to being Daredevil, he’s also an attorney. Matt’s being called to the stand to offer his legal opinion of the Punisher’s activities. His answers may surprise you.

AL: Any special teases for Comicosity’s readers regarding The Trial of the Punisher?

MG: I’d pay close attention to what Frank is doing turing the trial. He is NOT just sitting there, passively listening to the testimony. Part of the fun of this story for readers is going to be whether they can out-think Frank and figure out what he’s up to before the other characters do. I don’t think anyone has ever done a Punisher story like this before. It feels pretty unique, but at the same time never doesn’t feel like a Punisher story. Frank is at the front and center of of the action the entire time. Plus, it’s fun to see some of his chickens finally come home to roost. This might be the closest we ever get to Frank Castle getting justice. I doubt he’ll ever see the inside of a courtroom again. Frank would just prefer to go out in a blaze of glory… and gunfire.