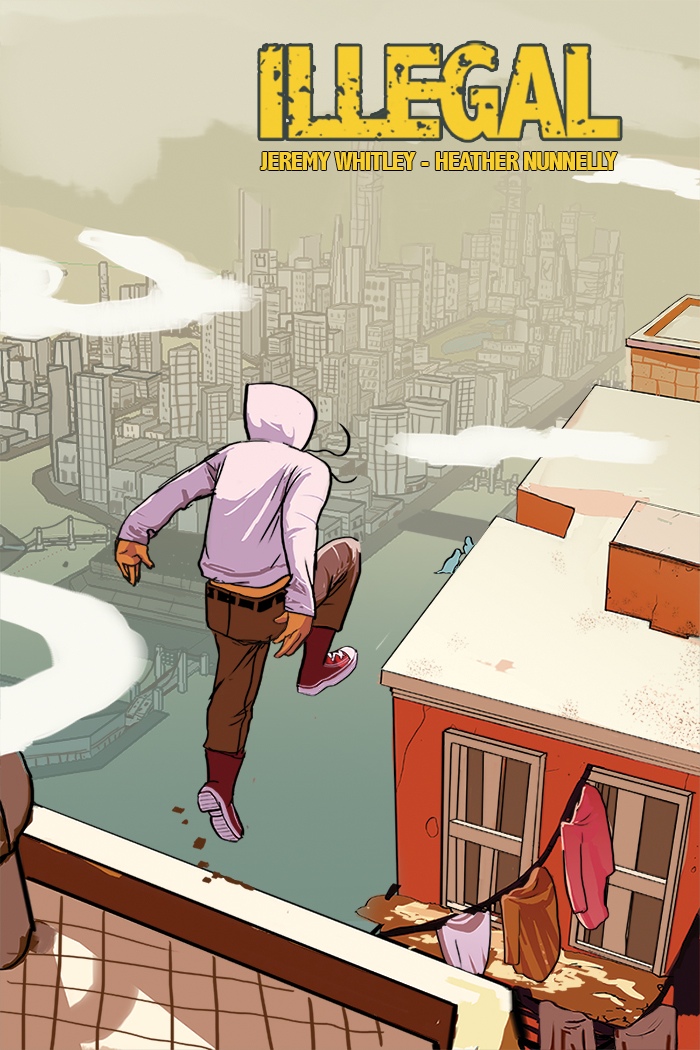 Comics has always been a medium where creators have explored current social issues through the lens of fictional universes and futuristic portrayals. One new independent comic that is raising awareness of immigration, sexual assault, and real-life topics in a gritty, smart fashion is Illegal, by writer Jeremy Whitley (Princeless, My Little Pony) and artist Heather Nunnelly. Nunnelly is creator of the long-running webcomic Vacant. In recent months, Whitley and Nunnelly completed a successful Kickstarter campaign, finished the first issue, and are currently working on the second. Nunnelly shares with Comicosity about how she approached the art in Illegal.

Draven Katayama: Heather, thank you for sharing with Comicosity about Illegal. Jeremy Whitley has said that Illegal was born out of his interest in science fiction and current issues with immigration, government, and survival. Tell us about how you joined this project and what interested you about it.

Heather Nunnelly: Funny enough, I applied for the job of drawing Princeless volume 3, I think, but didn’t get the job. However, Jeremy really liked my work so he pitched me Illegal. From the get-go I enjoyed it and thought it had a lot of potential. So, I agreed to work on the story.

I like Jeremy’s work because it tackles hard topics that I think other people would be afraid of exploring. I also liked the idea that there was a female main character. It was right down my alley of the kind of work I do.

DK: The first issue addressed a number of important topics, including sexual assault, racial profiling, and how youth and families are affected by injustice. How did you approach designing these characters and framing these scenes?

HN: That’s a good question because that’s something I thought about very thoroughly. Race, sexual assault, and politics are very hard to talk about because they’re very sensitive subjects, so when it came to drawing the comic I wanted to be careful.

The way that I approached these topics was by a providing a very specific color palette. Color is a very powerful storytelling tool. I use it in all of my work. So, for Illegal, I sat down and tried to figure out which hues I would use and what those hues would mean.

During the scene in which the sexual assault takes place, you’ll notice the slow change of color from one scheme to the next. At the beginning of the scene, all the colors that represent paradise are shown, but then it slowly changes to the colors that remind Gianna of her past. This was purposeful. I wanted to be able to express Gianna’s past of abuse, and her fear, without having to explain it through text.

DK: What is your typical artistic process like as you progress through working on a page, from layout and sketches to final colors, and what are some of the tools you use?

HN: I usually draw all the pages in a sketchbook, scan the pages, and then ink and color in Photoshop. I just use a pencil and tablet most of the time.

Learn more about the world and characters of Illegal at its Kickstarter page, and follow Heather Nunnelly and Jeremy Whitley on Twitter for the latest updates.