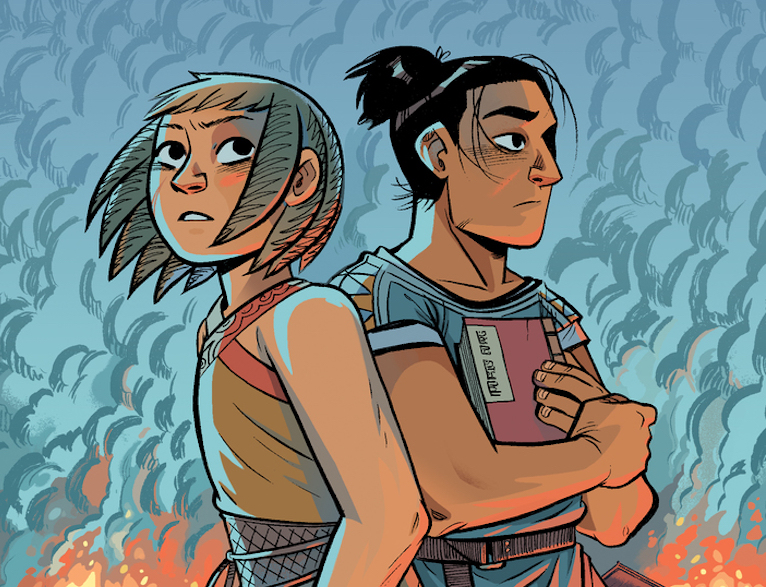 Storming into bookstores tomorrow, September 25, The Divided Earth brings the phenomenal Nameless City trilogy to a close. Faith Erin Hicks’ epic story of a City stuck between two warring factions ends with a flourish and Hicks was kind enough to talk about The Divided Earth with Comicosity below: 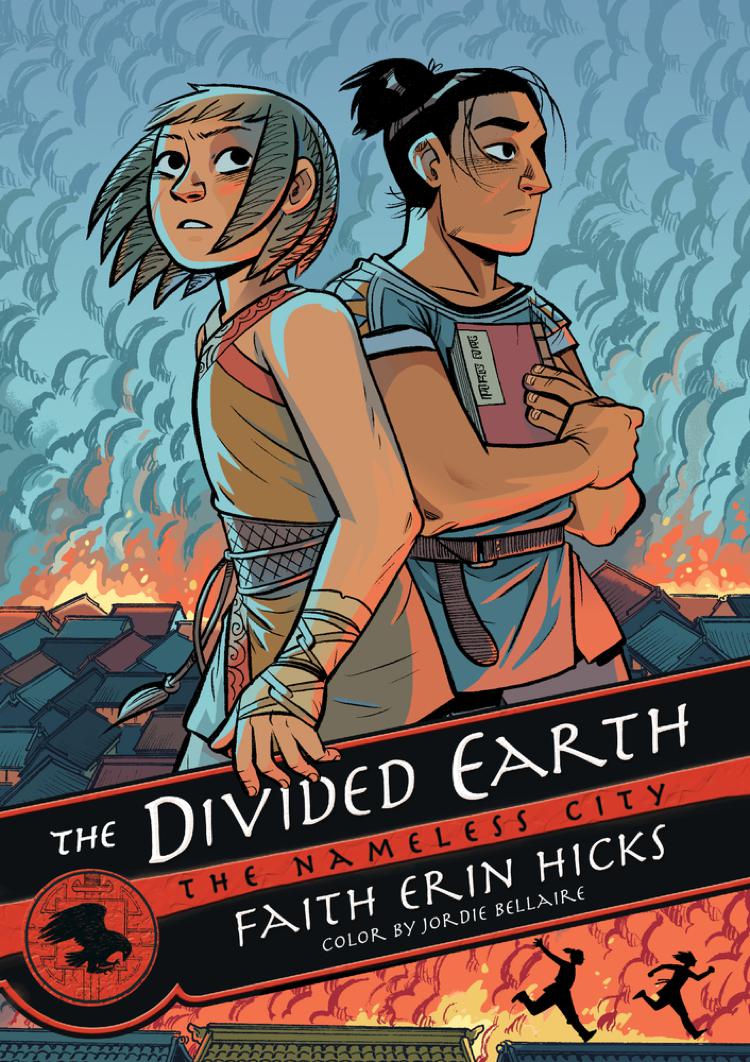 Aaron Long: Firstly, congratulations on building such a wonderful trilogy, capped off brilliantly with The Divided Earth! Can you give readers a tease of what they’re going to find in the third chapter of this story?

Faith Erin Hicks: Stuff blows up! There is hugging! Kai probably falls down a lot! We meet a badass new character who is basically Batman, except she’s a lady! I drew a twenty page fight scene and nearly died! My respect for manga artists and their crazy fight scenes has increased tenfold.

AL: With the opposing Dao and Yisun armies, a parallel exists to the political climate of right vs. left and the fight for power. Did the political landscape of the world today shape your storytelling throughout the creation of this trilogy?

FEH: The Nameless City has been a long gestating project, and most of it was written before the events of 2016. I’ve always been someone with an overdeveloped sense of empathy and justice, so while I deliberately included those themes in The Nameless City, it wasn’t a response to the current political climate. Rather it’s a response to the human condition of struggling to be better to our fellow humans, and often failing in that struggle. 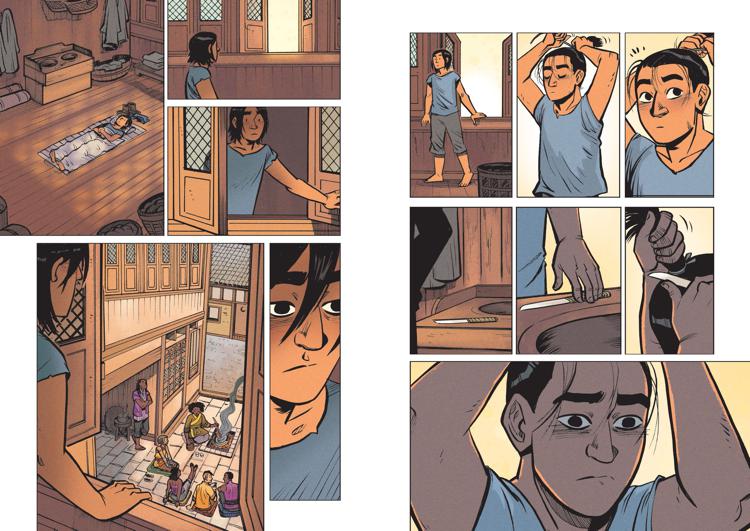 AL: As you were plotting and creating the trilogy, were there any characters whose role expanded as you wrote them? A character you initially didn’t plan to have in the spotlight but they just demanded more page time as this story grew?

FEH: Mura’s role expanded a lot as the story developed. I really love the Badass Female Bodyguard trope, because who doesn’t love seeing competent and powerful women taking active roles in action/adventure stories? But as I continued to write Nameless City, I decided I wanted to make her more than a supporting villain for Erzi. I wanted her to have agency and her own storyline. She wants things that he doesn’t want, and ultimately she’s a more destructive force than he is. I feel like my entire career has been building to writing a female antagonist like her.

AL: Being that you created all these characters this could be tough, but is there a character in particular that you identify with most? Who in the City is most like Faith? 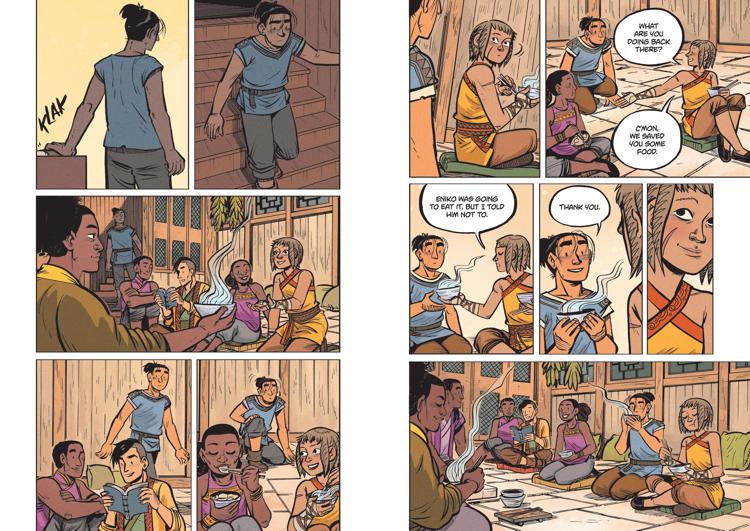 AL: Lets talk a bit about your creative process. Do you write full script and then start thumbnailing and penciling, or does the story change as you create the art?

FEH: I start with a rough thumbnail draft, drawn on lined pads of paper. I jot down dialogue while I thumbnail, and this allows me to figure out the pacing of the book, as well as what characters are saying. No one sees that part of my process, not even my editor. It’s basically a giant rough draft of the book, drawn in stick figures. Then I type up the script, tightening things up and changing what I need to change, and that gets handed into my editor. We go back and forth and when we’re happy with the script, I move on to pencils and then inks. I even write this way when I’m not doing the artwork, like when I write Avatar: The Last Airbender scripts. It’s just how my brain works, I need those thumbnails in there to figure out how the book should come together. Comics are both art and writing, and I feel like one shouldn’t take precedence over the other. This is my way of keeping the balance between writing and art.

AL: Throughout the volumes of The Nameless City, you have built such a rich, vibrant world & characters. Do you have any plans to return to this world in the future?

FEH: I love the world and characters, but I’m not sure if I’d ever want to go back to it, to be honest. There are other worlds and characters I want to explore! 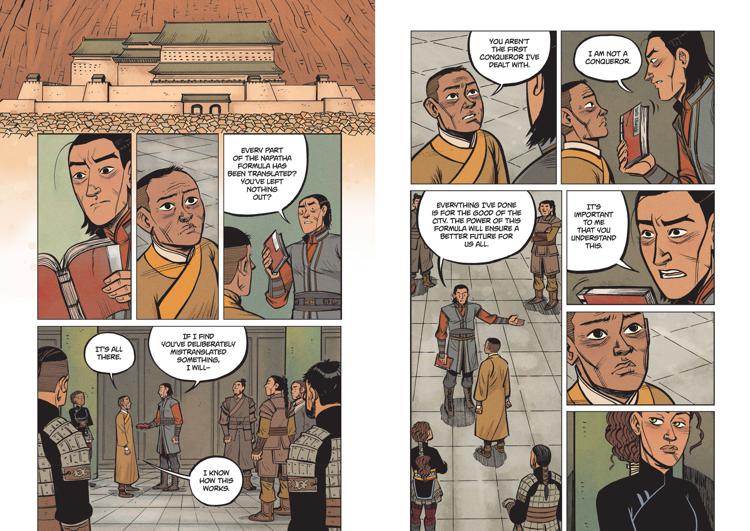 AL: The Nameless City trilogy has obviously been a large focus for you creatively the last few years. Can you give readers a heads up about projects you’re currently working on?

FEH: Yes! I have way too many projects, haha. Right now I am drawing Pumpkinheads, a graphic novel written by Rainbow Rowell, which will be out from First Second Books next year. I’m also writing Avatar: The Last Airbender comics for Dark Horse, drawn by Peter Wartman. I’m really excited about being involved with Avatar, it’s my favourite animated show. I also have a Young Adult prose novel coming out February 2019 from Macmillan called Comics Will Break Your Heart. My first novel and it’s all about comics.

AL: Any final words for Comicosity’s readers about The Divided Earth?

FEH: I really hope readers enjoy the conclusion! The response to the series has been wonderful, and I hope the ending doesn’t disappoint.