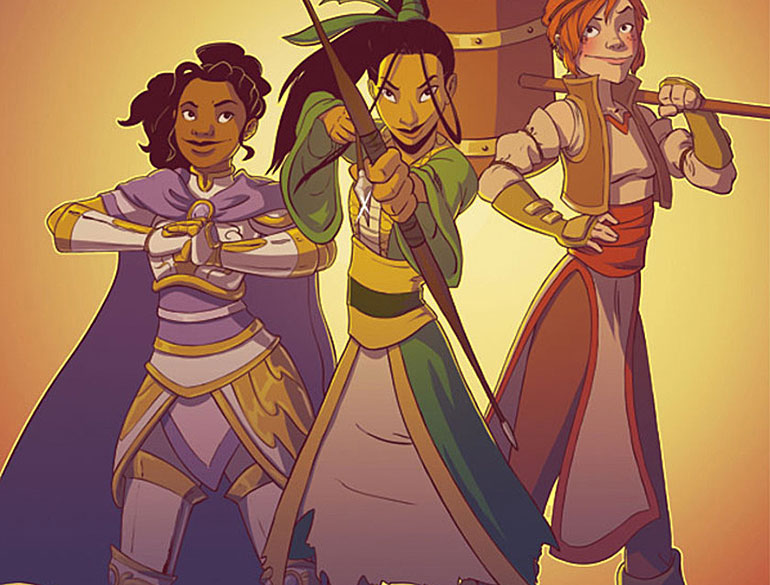 Princess Adrienne has accomplished a lot in a very short time. She’s escaped her tower, claimed her armor, made a best friend, rescued a sister — and now, has embarked on a new adventure alongside the legendary Pirate Princess, Raven. Rendering this latest adventure alongside writer/creator Jeremy Whitley is a pair of fresh artistic talent: Rosy Higgins and Ted Brandt.

On the eve of the release of Princeless: The Pirate Princess #3, Higgins and Brandt spoke with Comicosity about getting involved with Adrienne’s story, how Raven came to be the way she is, and what we can expect next. 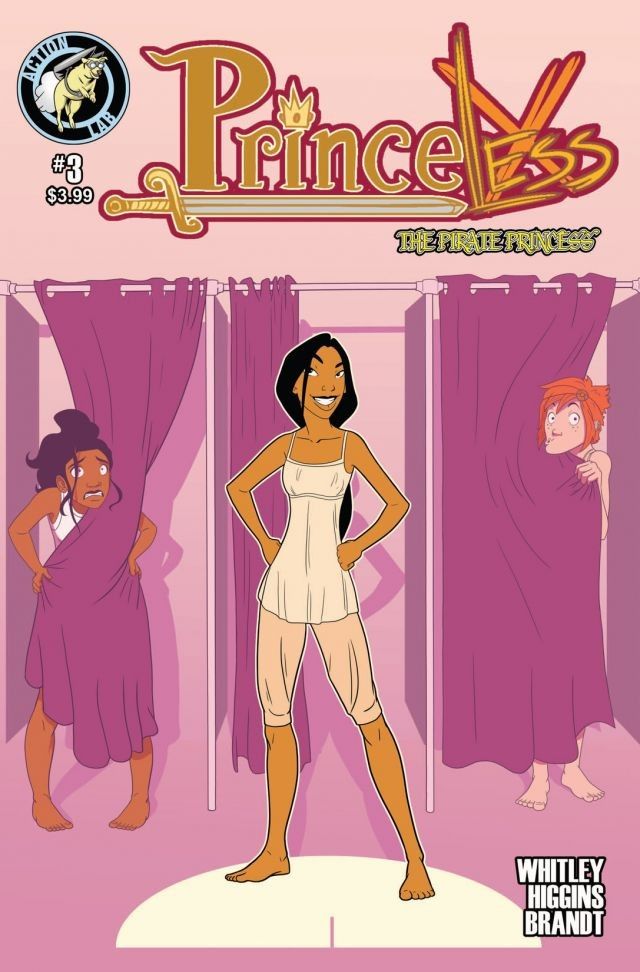 Matt Santori: Thank you both so much for taking time out for this interview! I want to start out by asking how you connected with Jeremy Whitley, coming on for Volume 3 of the Princeless book?

Rosy Higgins: Well, Jeremy had posted on Tumblr that they had lost their artist for the volume, so we just sort of jumped onto the opportunity.

Ted Brandt: I’d been following him on Tumblr for quite some time, and while Jeremy didn’t explicitly ask for new artists, we both had said we wanted to start making our way in comics. This seemed like an opportunity that was too good to be true.

MSG: That’s an amazing break-in story! The power of Tumblr!

TB: It seems to be the fastest growing tool for finding artists these days. It’s becoming a bigger and bigger thing. Kris Anka was hired onto X-Men through Tumblr, and I believe Babs Tarr was found for Batgirl through Tumblr as well. It’s really a great networking tool, and has an inherent advantage over twitter in that it’s so much easier to share images.

MSG: Jeremy had mentioned the same thing to me, and that you had sent him some sketches for the series. Can you tell me what your vision for Adrienne in particular was and is?

RH: Well, I hadn’t really read Princeless before, although Ted had. So, I didn’t really have a good idea of the character herself until I did a read through. She seemed very independent and a bit ballsy, but also with a bit of naivete in there. Basically, it was finding the place between independent and youthful, still a bit child-like, and the motivation like, “I’m going to go fix this.” 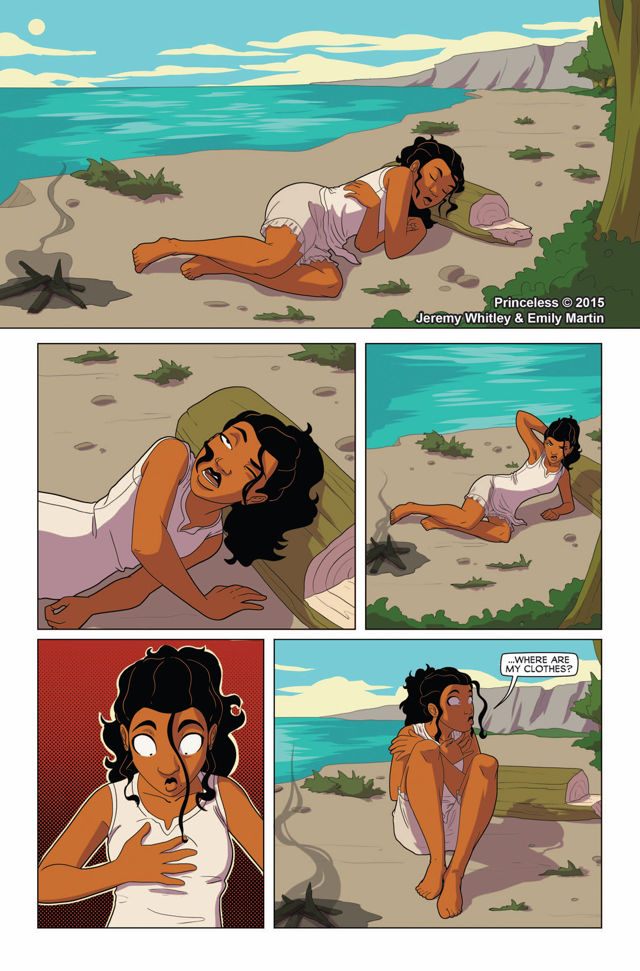 MSG: You’ve also had the opportunity to define Raven in a larger series, even though you weren’t the first artists to draw her. What are your thoughts on her character and your approach to her?

RH: She was meant to be more streetwise, around a bit more. But in terms of aesthetics — by comparison to Adrienne — Raven is more lean, a bit more catlike. The amount of flipping about and martial arts she does is different than Adrienne just going in and smacking things with a sword. Raven is much more precise.

TB: Adrienne is a bit more of a bruiser. In a fight, she gets by on brute force. With Raven, it was fun coming up with page compositions that allowed us to show off her athleticism and nimbleness to a full extent. In some of the fight scenes in later issues, we really made an effort to make sure that athleticism — and her acrobats even — was really on show.

One page in particular I’m thinking of in issue #4 was a really good test of our abilities to make her more dynamic and kinetic.

MSG: A lot of writers choreograph fight scenes. How are you working that out with Jeremy? Is he choreographing in the script or are you taking charge on that?

RH: Ted does a lot of the choreographing. We get a baseline of the action only, like a punch here or a kick there.

TB: Jeremy likes to leave it up to the artist. He’ll put in a suggestion for what he feels should be happening, but always with the understanding that if we come up with a better idea, we should run with that.

We’ve always had a lot of latitude with the choreography. Some of the pages have ended up very different to what he originally imagined, but I hope we captured the spirit of what Jeremy originally wanted better through altering those actions, even if he doesn’t get what he originally asked for. 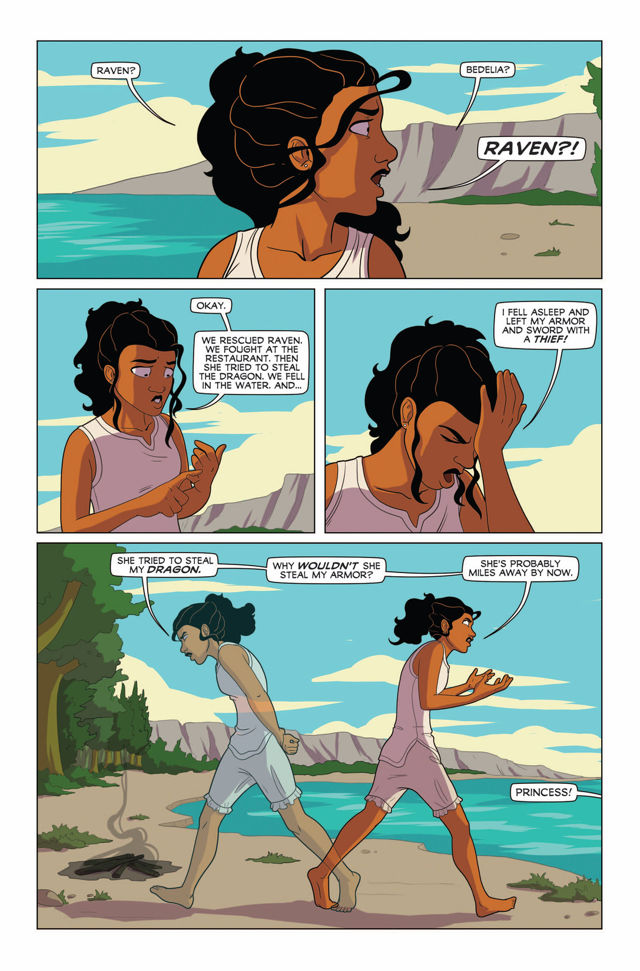 MSG: How do the two of you work together as an art team?

TB: We’re still figuring that out, because Princeless was the first time we worked together on anything. We’re still feeling our way through it, and work out where our strengths are.

We have sort of de facto job roles, based on the fact that we have very complementary strengths. I’ll choreograph the pages and do all the layouts, get the flow of action and work out which moments need bigger panels and which can be crammed into smaller ones. Basically, get all the pacing right.

Then Rosy will do all the pencilling, and get all the body language, facial expressions, and clothing in.

After that, I’ll do the inking, and make sure all of her linework is clarified, make it more clean and make sure, in some cases, it’s more legible. Then she’ll color and I’ll letter.

But the problem is, it’s never that neat. Those are our rough job roles, but realistically speaking, at every single stage it’s never just one of us doing it. Every so often, Rosy will have to help me fix pages because I’ll be staring at it saying, “I’ve got nothing.” Or she’ll pencil a figure and say, “This face looks wrong.” It’s a really good collaboration, but it’s not very clean.

MSG: Are you working digitally or traditional “pen on paper”?

TB: Digital all the way. Especially with the kind of speeds we’re trying to hit at the moment, traditional style would give us no margin of error for trying to correct mistakes. Digital is completely streamlining everything we do and allowing us to get to the speed we need to. 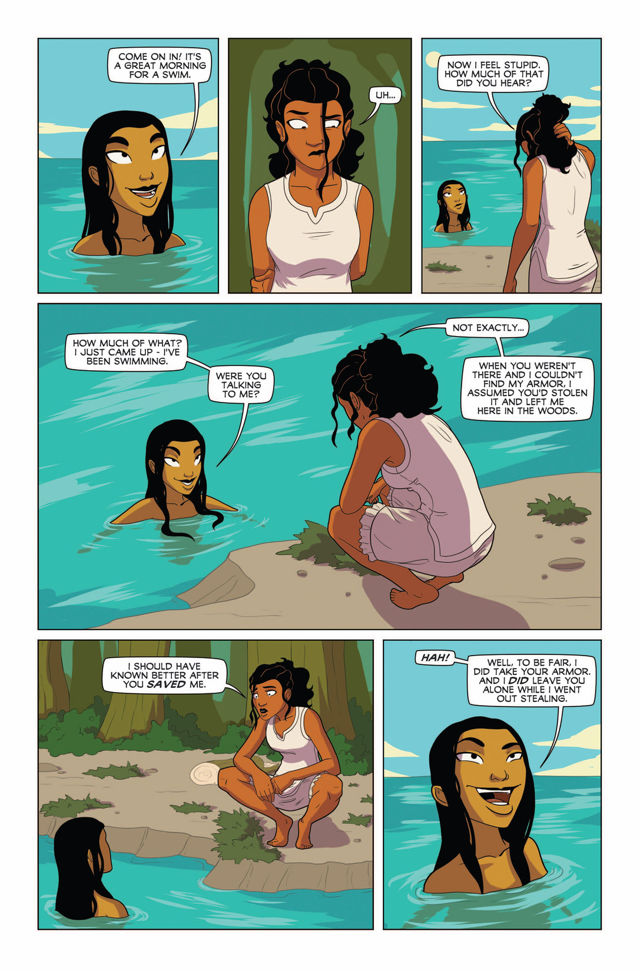 MSG: I’ve heard that a lot lately from artists, that the speed aspect to digital is really a big deal.

TB: The flexibility to digital allows you to take control of things in such a way that you can still do with traditional, but you have to be much more skilled. It’s not that digital is the work of the unskilled, but the ability to second guess yourself removes some of the obstacles.

MSG: Princeless definitely falls into the category of true all-ages comics. What “all-ages” means for every artist (and fan) is very different. What does that category mean for you in approaching a book like this?

TB: The epitome of all-ages in any medium is Shrek. It’s entirely suitable for anyone no matter how young, but as you get older, you get more and more out of it. And it never diminishes.

That’s what we’re trying to aim for with Princeless. As Rosy says, there are challenges, but as far as it being a really easy to read action story, it allows a young kid to get into the book. We’ve also tried to include things like subtle facial expressions and things like that, so that older readers will feel like they are having a sophisticated experience that speaks to them as well.

The third issue of Princeless: The Pirate Princess arrives in comic shops tomorrow, and is available on Comixology now. Rosy Higgins and Ted Brandt next work with Jeremy Whitley on a project for Action Lab Entertainment that gets announced soon!

And coming to shops soon… Princeless: The Pirate Princess #4! 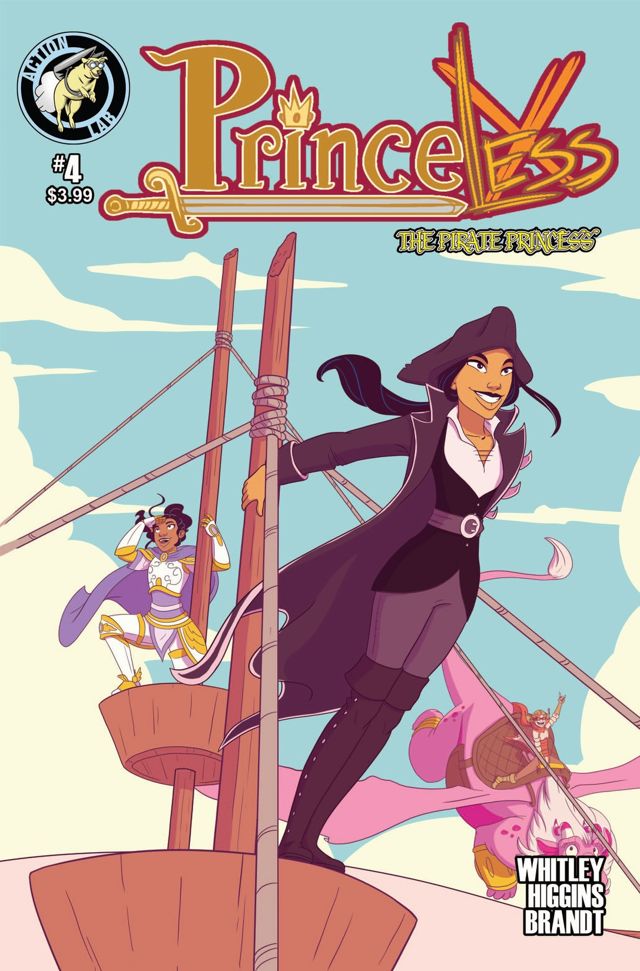