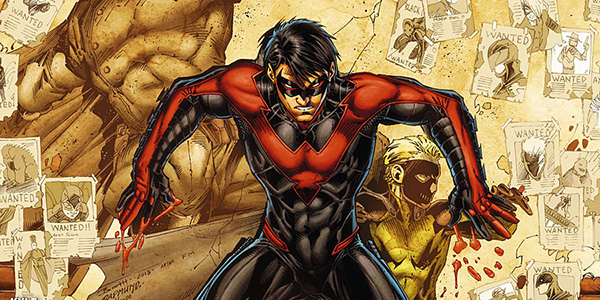 This August, Wizard World Chicago brought a plethora of creators to the Windy City to meet fans and share their experiences, but none have the odd opportunity to tell monthly adventures for two versions of the same character like Kyle Higgins does. Now the monthly scribe on the recently relaunched Batman Beyond 2.0 — available both digitally first and in print form monthly — Higgins adds the partnership of Terry McGinnis’ Batman and his new mentor, an elder Dick Grayson, to his work on the former boy wonder in the New 52’s Nightwing. Higgins was kind enough to chat with me on the spot from his table at Artists’ Alley about what he has up his sleeve for Terry, how he views Dick Grayson, and what Chicago means for him getting out from under Batman’s shadow.

Matt Santori: Congratulations on the big launch of Batman Beyond 2.0, Kyle, and thanks for taking the time to chat! It’s interesting to see how Terry McGinnis has developed over the “lost year” since the last series ended. How are you approaching him now that’s different than writers have in the past?

Kyle D. Higgins: I think the biggest difference is circumstances. For starters, putting him in a college environment is obviously a big change for his status quo, as anyone who has ever attended college can attest. Some of the challenges he faced before on the family side of his life — trying to get out after curfew to be Batman — are gone and replaced by problems with classes and trying to juggle his time.

Beyond that, there’s a big mystery about what happened in the missing year. If you notice in issue #1, Bruce Wayne isn’t there. The mystery as to why Terry and Bruce are no longer together is probably the biggest difference affecting Terry moving forward. We haven’t seen too much of Terry working on his own in the past, or working with someone like Dick Grayson. So, in addition to the shift in his environment (college, having his own room in the dorms, juggling classes, the loss of Dana), the biggest change is getting out from under Bruce’s shadow in a very literal way, since they are no longer working together. 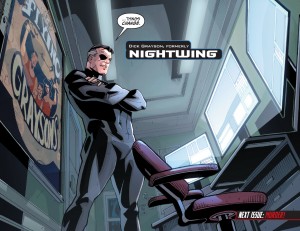 MSG: As we saw on the last page of the digital chapter #1, Terry is now in fact working with Dick Grayson behind the scenes. How do you see their relationship in comparison to that of Bruce and Terry?

KDH: It’s a little more a partnership of equals. One of the things I find so interesting about Dick Grayson in this era and at this age is that Dick has already gone through a lot of the experiences that Terry is now going through —having a fallout with Bruce, working to get out from under Bruce’s shadow. The thing that is often very interesting to me is that while Bruce could always give crime-fighting advice to Terry, he couldn’t give Terry the advice of what it’s like working with Bruce. So now someone like Dick can actually empathize with Terry as to what he’s gone through.

And from a personality standpoint, even though Dick Grayson is a little more hardened over the years now, he still is a character who enjoyed what he did. His persona lends itself toward being a little more lighthearted, with a few more quips. He’s a bit looser than someone like Bruce is. That is very similar to how Terry operates. Terry has gotten more serious as the show and the book progressed, but at his core, he’s still a late teenager.

MSG: So you are now in this unique position of telling Dick Grayson’s story in his early twenties and now presumably around fifty years old, two very distinct parts of his life. How are you approaching the same character in different ways? 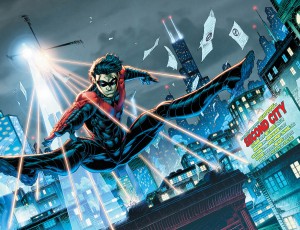 KDH: You know what’s interesting? I actually don’t connect them at all. They are completely separate people to me. The reason why is that the animated series version of Dick Grayson was always very different than the comic version of Nightwing. Chuck Dixon and Scott McDaniel’s stuff that I grew up on was definitely a bit lighter and quippier than the animated series version was. The animated series’ interpretation was a lot more brooding, a lot more “Batman.” That worked really well because you were transitioning from a light, jovial Robin to a few years later where Dick Grayson is a bit hardened. Loren Lester [the voice actor for Dick Grayson on Batman: The Animated Series] played the character a lot more even keel and darker — almost evolving into Batman. The comics went the other way with that.

Whenever I write Nightwing in the New 52, I’m writing him in a lot of ways closer to Loren’s portrayal of Robin in the animated series. Whereas in writing Dick Grayson in the Beyond book, I’m deliberately writing him more in line with Loren’s portrayal of Nightwing, if that makes sense. I try not to think about it too much, but when I write the New 52 Nightwing, I don’t always hear Loren’s voice for the character. When I write Dick Grayson for Batman Beyond, however, not a line goes on that page that Loren’s voice hasn’t influenced.

One bit of clarification: they are completely different continuities, as well. The New 52 is its own thing and Batman Beyond follows the animated series continuity.

MSG: Part of the more lighthearted turn you’ve taken with the New 52 Nightwing involves his recent move to Chicago, away from Bruce in Gotham City. What can you tell me about how Dick is crafting this new space for himself? 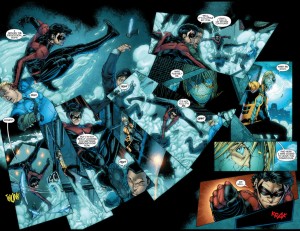 KDH: Even though Dick has moved to Chicago to deal with something very personal — tracking down Tony Zucco, the man who killed his parents — in a strange way, it represents a fresh start for him. It’s a new city that is removed from Batman, that’s removed from the events of the last year and a half, and is also removed from all of these sequences he didn’t have very much control over like the Court of Owls, the Joker, and Damian’s death. Moving to Chicago to deal with something personal is cathartic in a way, because it represents something that he actually has control over in his life.

The way I’ve been approaching the move is with a lighter tone for the book, because even though Dick is dealing with something that could be very dark and vengeance-driven, that’s not how it’s affecting him. The change of scenery is a good thing and I think it’s brought new energy to the book as well. I think the character is fun again and I think you can tell from the pages I’m having a blast writing it!

MSG: It’s definitely become the type of book readers seem to clamor for, especially in the New 52 — a bit more of a light-hearted adventure in tone.

KDH: Well, that’s definitely been one of the challenges over the last two years. When we started the book, we knew we needed to build to the Court of Owls storyline, and then after that we knew the Joker stuff was coming up, and then Damian. All of these dark, morbid situations were developing, and as much fun as the crossovers were for me, they also established a tone for the book and character that’s not as fun to explore as the stuff in Chicago has been. 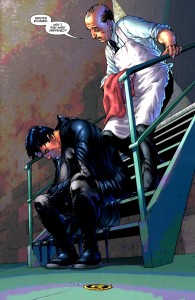 MSG: It’s an interesting distinction to make too, between Bruce and Dick, as the New 52 began with Dick just relinquishing the Batman identity. So in a way, your run has been a slow progression to bringing Dick Grayson back to the person he wants to be.

MSG: Any special teases or last thoughts to share with the Comicosity audience?

KDH: I should have a couple of announcements coming up in a few months about creator-owned books that I’m really excited about, so those will be the next big thing for me!