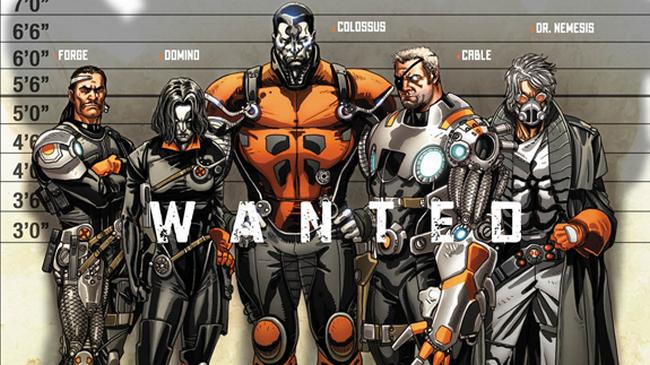 As part of Marvel NOW!, writer Dennis Hopeless was tasked with bringing Cable back as an active character in the Marvel Universe. Since Avengers: X-Sanction, nobody has really known what is going on with Cable, other than he is alive and will still protect Hope at any cost. Hopeless is bringing Cable into the next phase of his life with an all-new X-Force, a crew assembled for a purpose that only Hopeless knows. He was kind enough to take time to discuss the title and what readers can expect from Cable and X-Force. 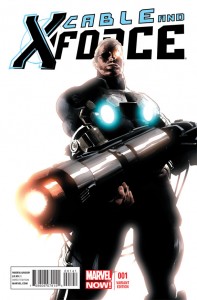 Aaron Long: Let’s start at the beginning: how did you get involved with Cable and X-Force?

Dennis Hopeless: This one’s easy. Nick Lowe called me up and asked if I’d be interested in pitching a Cable-led X-Force book. I put the phone down, did some sort of happy dance, picked the phone back up and said “yes.”

AL: Cable has been largely in the shadows since Avengers: X-Sanction. Can you shed some light on what he’s been up to since the mini-series?

DH: Cable woke up from his X-Sanction coma in a pretty rough state. His arm is badly atrophied from years underneath Techno-Organic Virus. He’s broken down and worn out. And that doesn’t even take into account the fact that the last time anyone saw him alive, he was trying to kill The Avengers.

Cable has spent his time in the shadows, putting himself back together and trying to figure out what his place in this post AvX world will be. It’s a world in which his father is now an outspoken super villain, where his daughter is trying to live a normal life and Apocalypse is a boy who goes to Wolverine’s school.

When we meet up with him in Cable and X-Force, Cable has things pretty well figured out. He wants to retire and build some kind of normal relationship with Hope 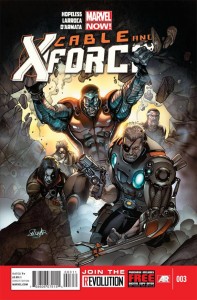 AL: Cable is never without a mission, can you discuss what his objectives are for this new team?

DH: Cable wants to be done. He’s decided to take his daughter’s path and to retire. Unfortunately, there’s a big nasty threat that has to be dealt with first. This team is put together to for one job. Cable and X-Force have to save the world one last time, then they can all go their separate ways and he can be done. That’s how they’d like it to turn out anyway.

AL: Cable has surrounded himself with a somewhat different crew than usual this time. What has drawn characters like Colossus and Dr. Nemesis to Cable’s cause?

DH: Everyone on this team was chosen for their specific skill set. Dr. Nemesis, for example, is initially brought in as a doctor. There’s a medical emergency and Cable needs his specific skills. His role expands a lot from there, but the crew is very much built around immediate need.

Colossus comes out of AvX in a very dark place. When Cable finds him, he doesn’t want to be found. Peter agrees to help and inadvertently complicates his life even further. The same can be said of all the members I think. They trust Cable, agree to help, and get swept up into a whole mess.

AL: And now, a process question: what has your scripting process been like with Salvador Larroca? Have you toyed with using Marvel style for the series?

DH: I’d love to try working Marvel style at some point, I just don’t think I’m quite there yet. I still feel like I need to see the full script to wrap my mind all the way around the scenes. That said, I do my best to give my artists room to play. Salva brings a lot to the page that isn’t in the scripts. His tech designs in particular always wow me and I find myself reworking dialogue or redrafting later scenes to take advantage of those additions. I’m really lucky to be working with Salvador Larroca.

The only hard part is that he’s so fast I have to struggle to keep ahead of him.