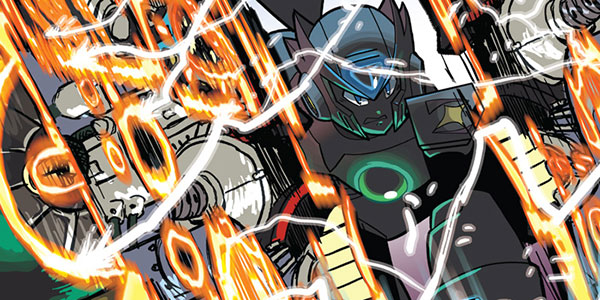 The future is hurdling toward the… um, other future, as Mega Man and his descendant Mega Man X are on a crash course to meet up in this summer’s “Dawn of X” storyline, beginning in Mega Man #37! Writer Ian Flynn and editor Paul Kaminski sat down with Comicosity to share their extensive thoughts on the differences between classic Mega Man and his counterpart 100 years hence, what fans can watch out for in the upcoming crossover, and what we have to look forward to for this year’s Free Comic Book Day from Archie Comics! 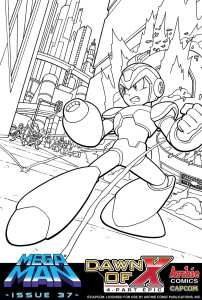 Matt Santori: Thanks so much for taking the time to talk about Mega Man X, gentlemen! As we get closer to the “Dawn of X” storyline in Mega Man, what are you perceiving are the biggest differences between Mega Man and his counterpart 100 years in the future?

Ian Flynn: I guess one difference is how they view the world.  Rock has this unwavering optimism that stems from his built-in child-like naivety.  X likewise hopes and strives for a better tomorrow, but has a harder time maintaining his idealism.  That stems from their fundamental physical differences: Rock has some room to grow, but he will always be a robot, whereas X is a truly thinking, feeling, sentient individual.

Paul Kaminski: It’s a dystopian future, so X kind of got the long end of the stick on the whole “nature versus nurture” thing. He’s got to face a more challenging world around him, which affects how he reacts to a given situation. Mega Man is surrounded by family: Dr. Light, his sister Roll, his Robot Master brothers-in-arms– even a pet dog! X is surrounding be morally ambiguous characters with shady motives, which takes its toll. “Good guys” and “bad guys” are a lot easier to handle when there’s more definition between the two!

MSG: The world of Mega Man X is now split between humans and reploids, robots that think and feel like humans, unlike where Mega Man is fairly unique. How do you feel that development defines the course of society in the future, and is that in fact key to its dystopian nature?

IF: We live in an age of technological wonders.  Modern telecommunications alone are staggering when you consider our grandparents needed operators to physically make connections for land-lines, and today we have lag-free, real-time video conferencing from any point in the world to another.

Now imagine if that kind of technology were to spring up, literally overnight, during World War II.   Imagine how completely different things would’ve turned out if either side had gotten its hands on email, or instant global telecommunications.

That’s basically what we’re looking at in X’s time.  In a matter of months, humanity was forced to coexist with a new race of beings.  We’re currently wondering if we’ll ever achieve true artificial intelligence, and the people of 21XX wake up one day to find it a fact.  There’s been no time to adapt, no time to accept this new reality.  And with such suddenness, there’s going to be friction.

PK: The reploids have only been in existence for a short time when the X story opens, and they are able to think, feel, and contemplate all the big questions of the universe on their own. So how long before they decide they’re superior to the humans and don’t need to live in coexistence? And when those crazy Mavericks start hurting people, do the same judicial rules apply to them? And if not, is it murder to deactivate one of them? And that’s only a handful of questions posed by the reploids existence —  and the growing pains of a society that has to figure all that stuff out is going to HURT in a big way.

MSG: As we’re seeing two versions of Mega Man meet up, what other opportunities for crossovers and meet-ups in the two Mega Man timelines most intrigue you for the story?

IF: At some point, I’d love to explore the era bridging Mega Man X and Mega Man Zero – the Elf Wars and how things go from bad to worse.  I’d love to take a look at Zero’s life in total – from Wily’s era, to Sigma’s, to Neo Arcadia.  And it’d be great if we could look at how it all goes from Mega Man to Megaman Volnutt – from robots striving to be alive to full robot-human hybrids.

PK:  There’s so much awesome going on in Dawn of X, I wouldn’t want to spoil anything by giving plot details away!  But I can say that Mega Man and X will face a mutual threat, and that there WILL be an element of time travel in DoX. Bottom line is we wanted to make sure this crossover event was a proper introduction to the X universe, and the need to define it by the two Mega Mans (Mega Men? The Megas? * shrugs *) meeting directly isn’t the top priority.

MSG: The jump forward device is one of my favorite in all of fiction. How much of the missing 100 years between Mega Man and X are we privy to going into the event, and how do you find using that device when crafting the story? 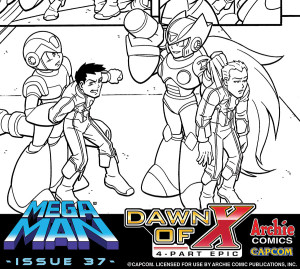 IF: We’re not touching the “lost era” between Classic and X – not yet, anyway.  That has been steeped in so much mystery and anticipation, I felt wrong introducing it so early.  Instead, we’re playing with the divide, highlighting what’s so very different between Rock’s era and X’s era as they fight the common foe.

PK: As anyone who reads the Mega Man comic knows, our big thing is to remain respectful of the source material. Ian fills in stuff here and there in the world of Mega Man classic to flesh out a story, but never anything that would drastically alter the mythos or (hopefully) detract from a hardcore fan’s enjoyment of the series. That said – if the gap of time between classic and X were ever to be explored, we would do so with care and humility.

MSG: Mega Man X is also the focus of one of Archie’s key Free Comic Book Day offerings. How did this opportunity develop for you and how do you plan to use it to expand the story?

IF: The stories you’ll get on Free Comic Book Day help set the stage for Mega Man X.  Folks are familiar enough with Rock and his world by this point, so the free issue will bring you up to speed on X’s world and set you up for the start of “DAWN OF X.”

PK:  Oh yeah, FCBD this year is awesome! (We got our office copies a little while ago and I was downright giddy when it came in!) It’s a flipbook offering, with the complete “X-Factor” storyline on one side, and an awesome Sonic the Hedgehog “Origins” feature on the other! “X-Factor” sports art from Archie Sonic and Mega Man legend Patrick “SPAZ” Spaziante, and really paints and beautifully detailed picture of the world of Mega Man X. We’ve also got a “DAWN OF X” pin-up at the center of the book featuring more awesome SPAZ art! Don’t miss it this year – May 3rd, mark ‘dem calendars! 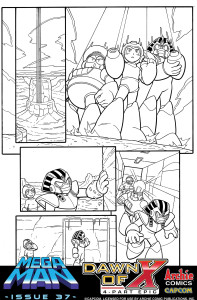 MSG: Solicits for the first part of the “Dawn of X” story indicates the surprise return of a character. Any hints or teases fans of Mega Man should be watching out for in advance of that issue?

IF: It’s definitely not someone you’d expect.  And it’s not just a simple cameo, either.  This character will be something of a herald for upcoming events, and what happens in “DAWN OF X” will set-up this character’s future for years to come.=

PK: Yeah, this character’s involvement in the story is going to take some people by surprise, and by part 4, it’s going to blow some minds. I can say no more – but be ready for a shock in Mega Man #40 (the conclusion of “Dawn of X”)!

MSG: Any final thoughts or special shout-outs for the Comicosity audience?

IF: I’ve been having a blast getting immersed in the Mega Man mythos, and I’ve wanted to really delve into MEGA MAN X for a while now.  I think a lot of the fans of the franchise will get a feel for how much love we’re pouring into this, and new fans will see immediately just what all the fuss is about.

PK: Absolutely – we have been so thankful and happy with the response of the fans and comic readers out there to our Mega Man series over these past 3 years, and we are dying to tell more stories in years to come! If you care about this franchise, the best thing you can do is to support this series as much as possible, because the more you continue to support it, the more comics we can make. Who wants a Mega Man X ongoing series? I know I do – and the best way to vote for it is to go out and pick up DAWN OF X this spring/summer in your local comic shop or other fine retailer. And make sure you let the manager know you want these issues ordered – the more you demand it, the more stories will come!

The “Dawn of X” storyline, crossing over Mega Man and Mega Man X, begins this summer in Mega Man #37 from Archie Comics.  And don’t forget to check out Archie’s offering at this year’s Free Comic Book Day at your local comic shop!

Meanwhile, check out this preview of April’s Mega Man #35: 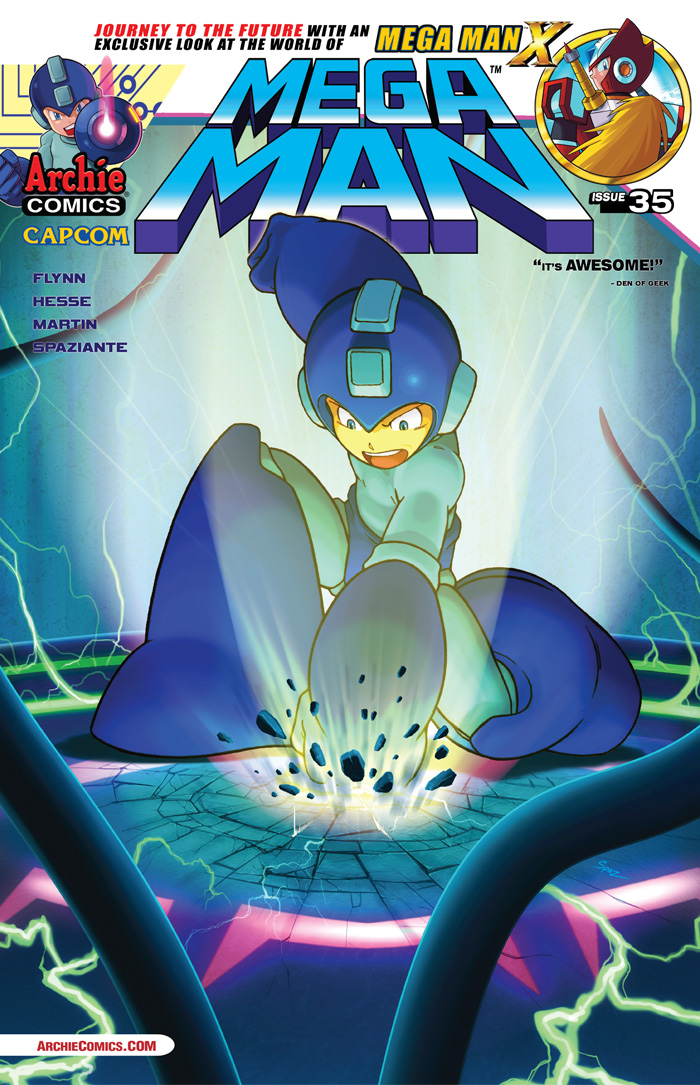 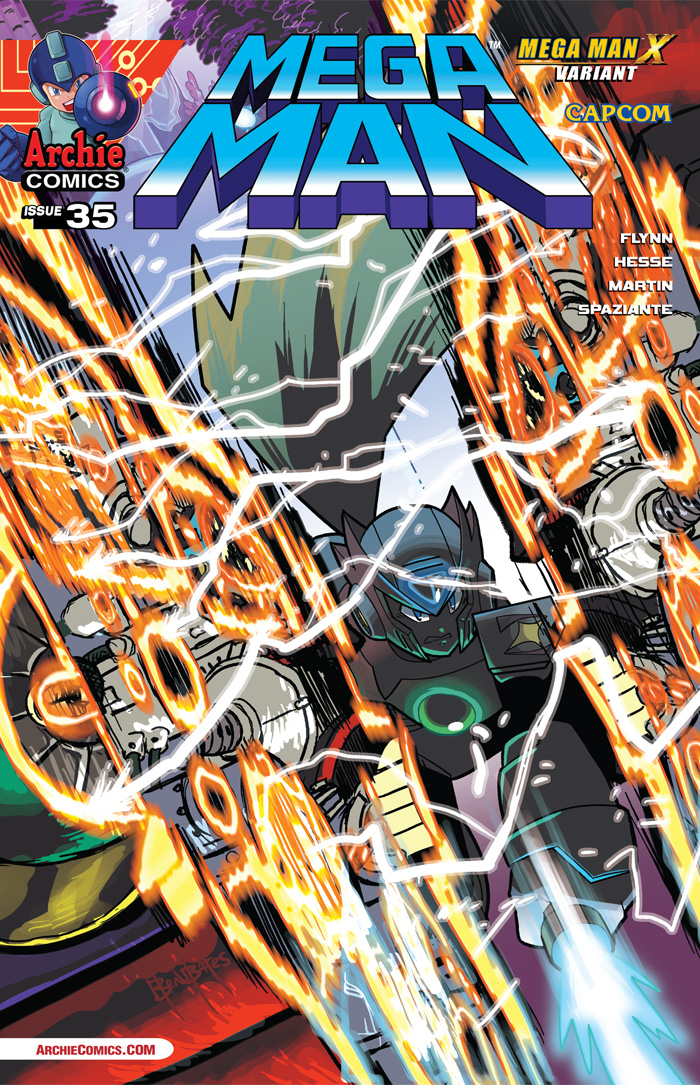 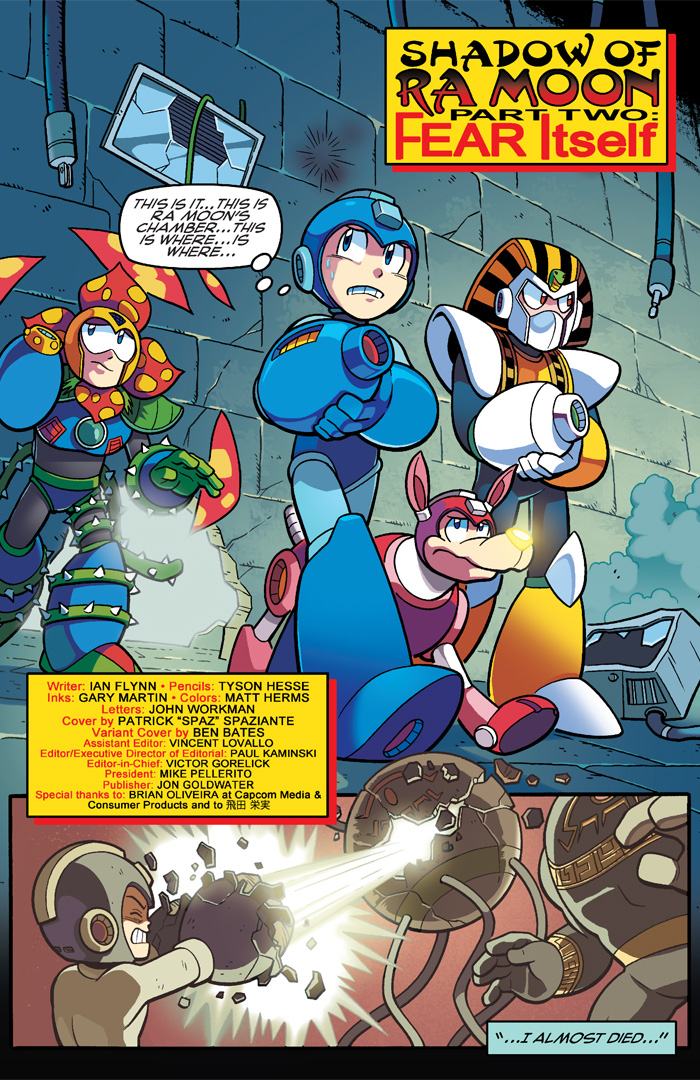 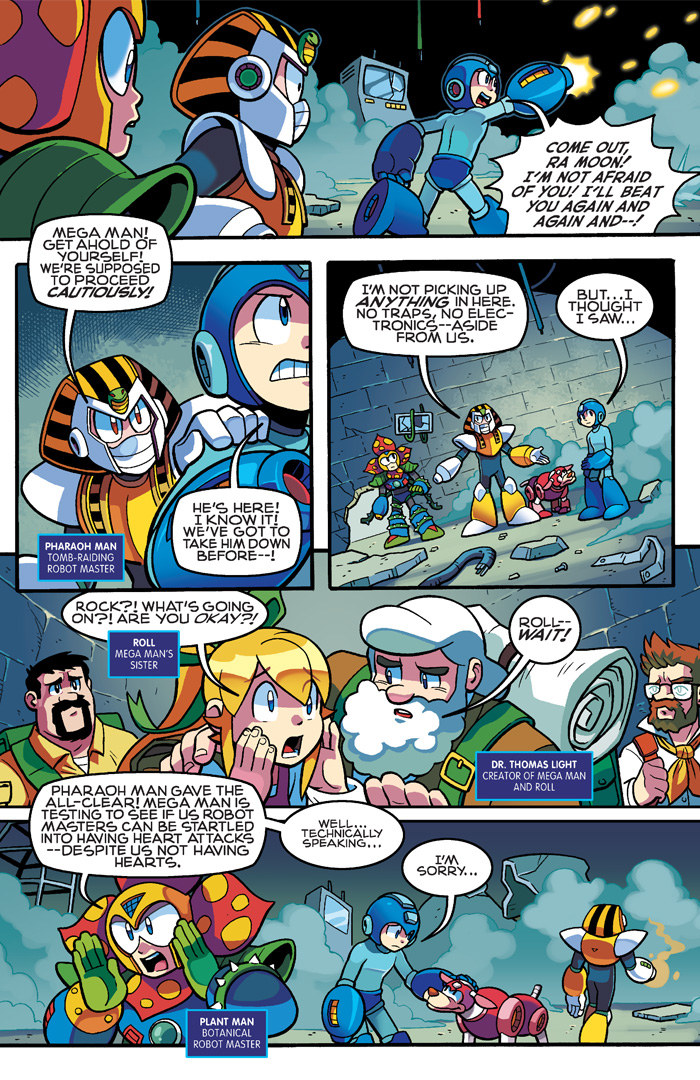 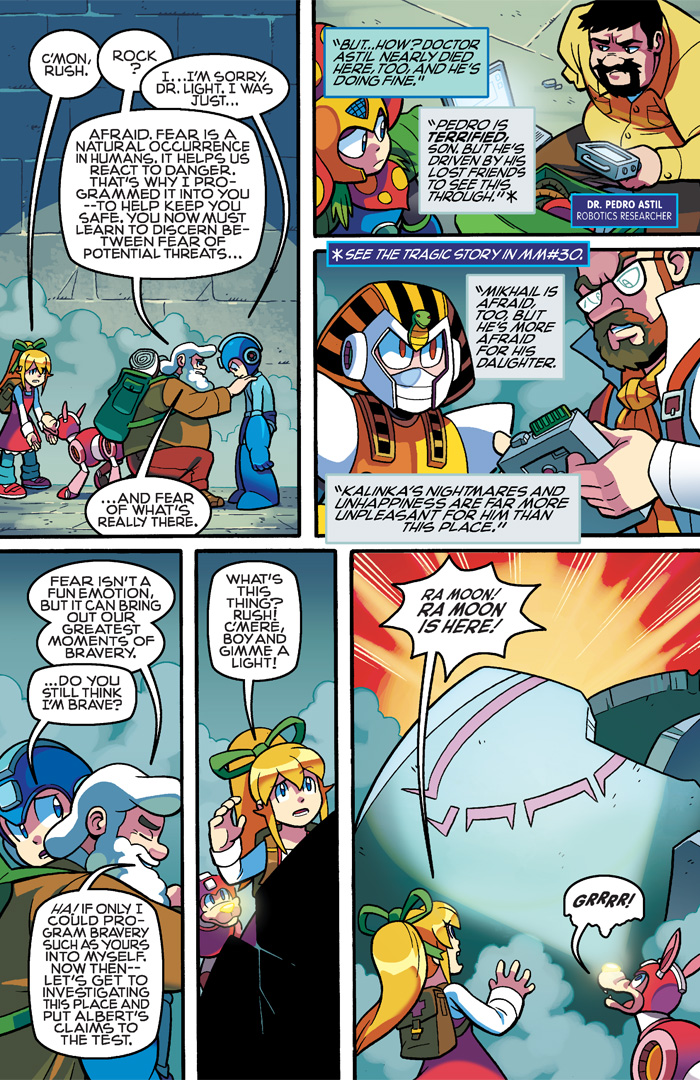 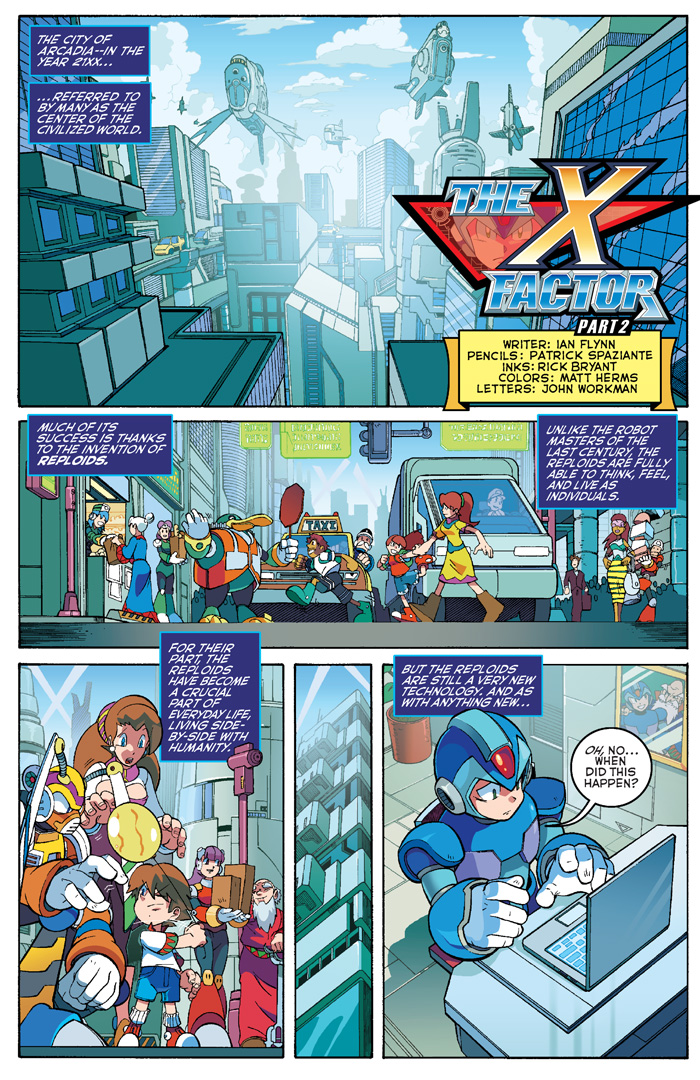 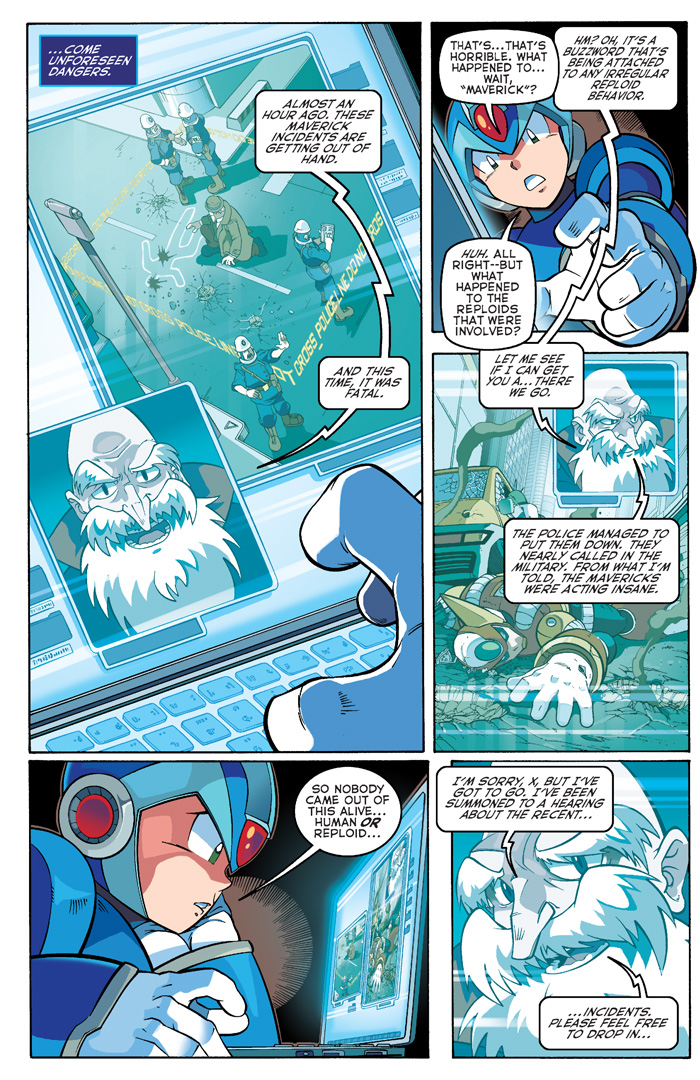