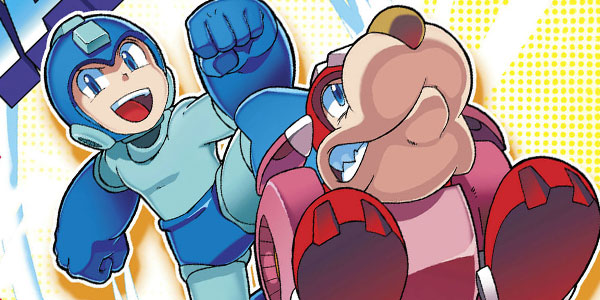 What makes Mega Man one of the most enduring cross-platform characters in the industry? The character has been a hit at Archie Comics for several years, with issue #34 hitting stores today. Mega Man writer Ian Flynn has a handle on what keeps this character relevant in both the video game industry and the world of comics and was kind enough to discuss the character and where the series is headed with Comicosity. 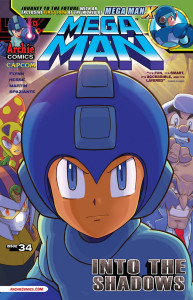 Matt Santori: Thanks for taking the time to speak with Comicosity, Ian! Lots of video games get made into comics, but few have the lasting power that Mega-Man has shown. Why do you think that is and what do you like most about the character?

Ian Flynn: Everybody loves to root for the underdog.  It can be hard to see Mega Man as one once you’ve gotten all his weapons and are tearing it up, but under all the armor and upgrades is a little boy.  The only reason he’s taking on whole armies single-handedly is he wants to help.  I think it’s that simplicity, that purity, that we all long for and want to see succeed in the world.

Or maybe it’s the bright colors, fun characters, and robots shooting stuff at each other.  Whatever floats your boat.

MSG: The latest story begins the aftermath of “Blackout: Curse of Ra Moon.” What can you tell readers just jumping on to Mega-Man at this point in his story?

IF: Ra Moon was easily the biggest, most dangerous foe Mega Man has ever faced.  It literally took everything Mega Man had to bring Ra Moon down, and the very first story is about bringing him back from the brink of death.  After that, it’s about Mega Man – and a number of other characters – dealing with the fallout of Ra Moon’s attack.  And Dr. Wily – as ever – is trying to find a way to turn this all to his favour. 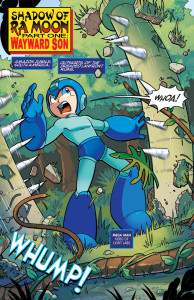 MSG: The theme of family is woven through a lot of Mega-Man’s story, which seems unique for a narrative involving mostly robotic leads. What are your thoughts on the combination and what it means for Rock as a character?

IF: I think it’s what really gives the story staying power.  You can have robots blowing each other up on every page, but it won’t mean anything to the reader if it doesn’t mean something to the characters.  Rock’s not just fighting for an objective or to complete a mission, he’s doing it for the love and safety of his family.  It adds a heightened sense of drama to every encounter since it isn’t just Dr. Light’s best robot fighting out there, it’s his son.

That idea of family being the driving motivation for these characters was something we played with in the crossover event between Mega Man and Sonic the Hedgehog, and the fans really enjoyed it. It became an over-arching theme and you can see that really clearly in the graphic novel collections of that storyline that are coming out now.

MSG: Mega-Man’s confidence seems quite shaky at this point in the story. How do you find the balance between overt heroism and this sort of questioning when writing? 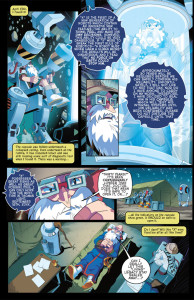 IF: It all comes down to what “heroism” is.  One of the lessons Mega Man has to learn is that bravery and heroism don’t mean fearlessness.  It’s how we deal with our fear and anger that defines us.  Being shaken to your core doesn’t mean you’re not a hero.  Marching back into the black pit where some soulless, alien machine nearly killed you and everything you held dear JUST to make sure it’s dead – that’s heroism.

MSG: Issue #34 also features the introduction of the “Mega-Man X” back-up, set 100 years in the book’s future. What opportunities present themselves with this formula that you may not have in the regular story?

IF: Mega Man X is its own world brimming with its own characters, settings and themes.  If Mega Man Classic sets up the ideal, Mega Man X is a bitter look at how things can go wrong.  There’s this interesting duelling disconnect/direct connection between the two eras that we’ll be playing with in the upcoming crossover, “Dawn of X,” starting with Mega Man #37.

MSG: May sees the appearance of a special Mega-Man/Sonic flip book for Free Comic Book Day. What can you share about the book for readers heading to their shops that day? 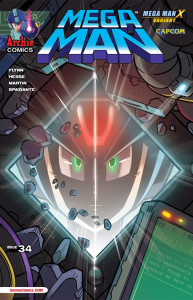 IF: On the Mega Man side, folks will get to read the entire Mega Man X back-up story feature.  On the Sonic side, folks will get the first two instalments of our brand new ongoing feature “Sonic Comic Origins,” which will be filling in a lot of gaps in the new timeline which we established in the wake of the Sonic/Mega Man crossover event last summer.

IF: This is a really exciting time for us.  We’re fast approaching the Mega Man 3 storyline in the comics.  We’re opening the door to the Mega Man X world.  And over in Sonic the Hedgehog and Sonic Universe, we’re exploring a brand new, game-centric continuity.  Now is the perfect time for anybody to jump on and enjoy the ride!