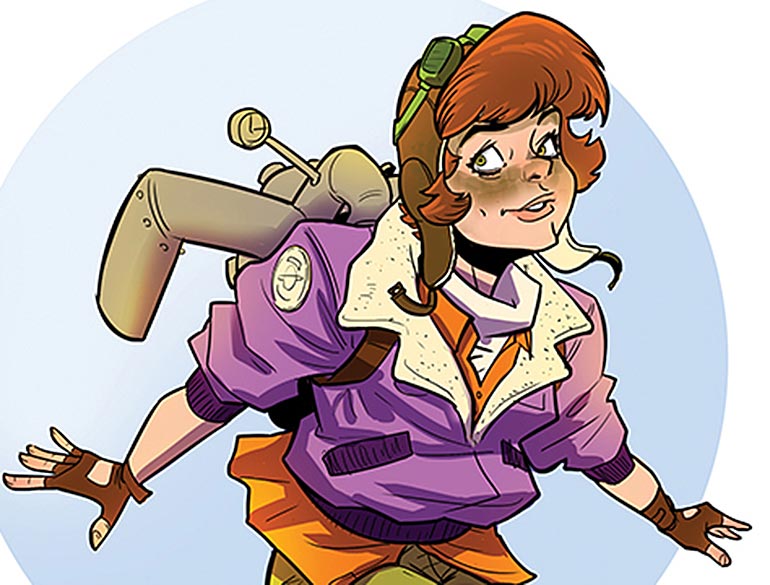 When I was a kid I would go to my grandmother’s house and head straight for an old wooden box. In it was a collection of old comics that belonged to my dad when he was a kid. I spent countless hours reading and rereading fun, upbeat, and adventure filled stories of my favorite heroes. I recently enjoyed those feelings again but with a modern comic book. Jupiter Jet, created by Jason Inman and Ashley Victoria Robinson, is a new comic that will immediately put the reader into a golden age state of mind. The married couple is well known for their podcasts, videos, and behind the scenes work on other comics but this is their first original creation. I recently had the opportunity to talk with them about their new comic book and why it was so important to capture that classic feeling. 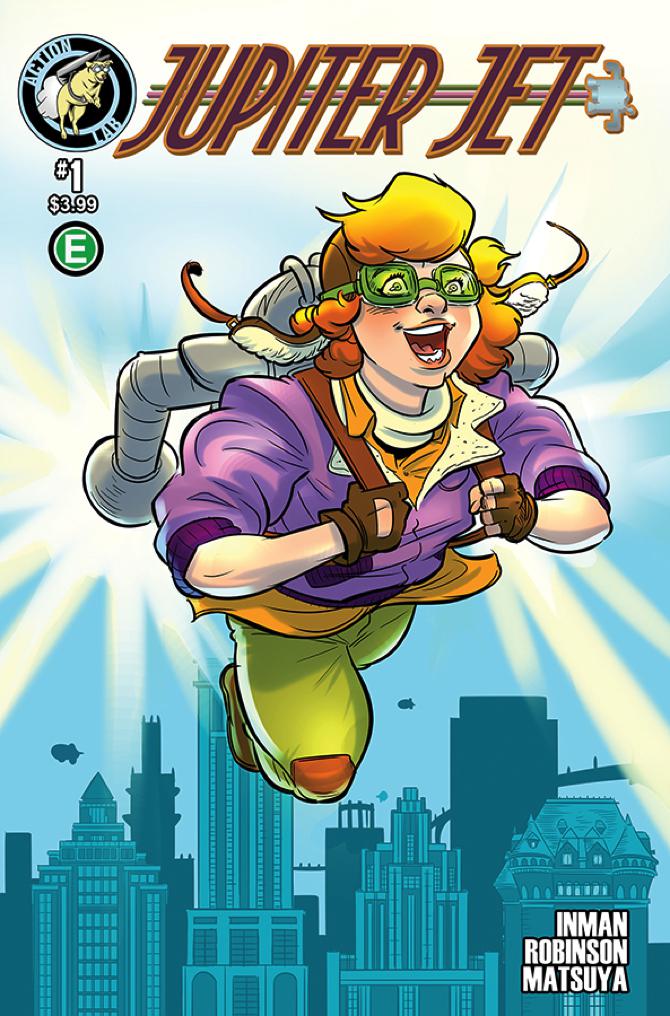 Chris Campbell: Jupiter Jet has a very golden age feel to it and I’m not just talking about the character and set design.  I felt like a kid again reading my dad’s old Superman comics. What made you decide on this overall feel for your book?

Jason Inman: I’ve always felt that the best comics and movies should have a timeless feel to them and that’s something that was very important to me for Jupiter Jet to feel that way. Every comic reader knows the golden age and recognizes that tone. It was a great way to welcome the readers into Jacky’s world very quickly.

CC: Over the years you have covered so many origin stories in the Geek History Lesson podcast. What do you feel is most important when telling an origin story?

Ashley Victoria Robinson: This is such a great question because I love origin stories most of all! For me, it’s the trick of balancing all the beats and tropes that are expected with a new lens on top. We basically know what we’re getting into with a classic hero’s journey. It’s being able to present characters, world and set dressing that feel fresh and interesting because the structure is so familiar.

Also, simplicity. An overly complicated origin is bad for everyone. 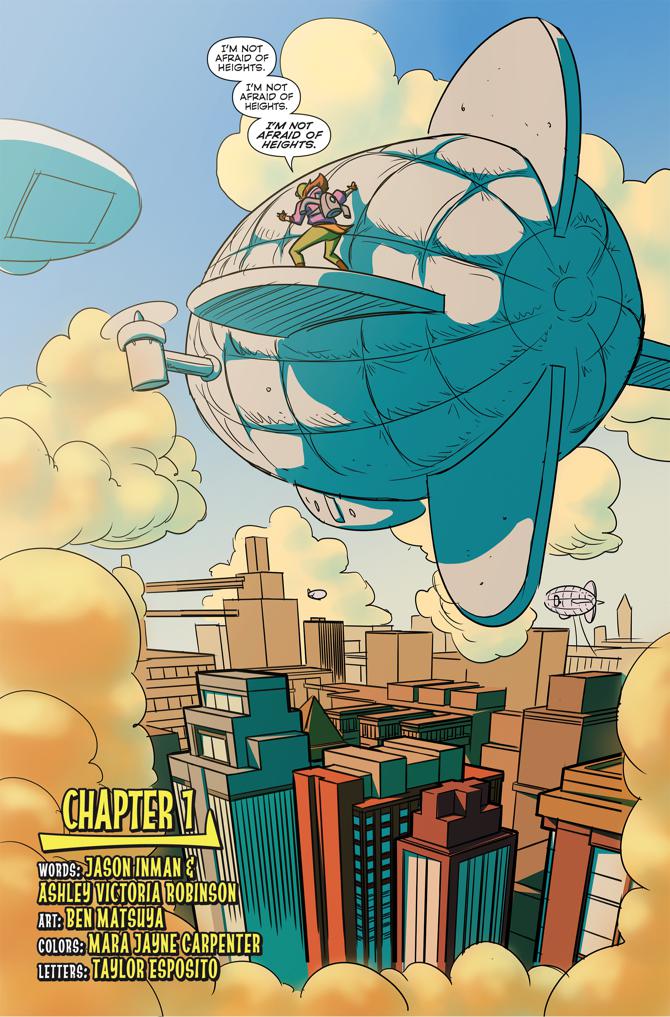 CC: Is Jacky a super-hero or is she more of an adventurer?

JI: Well at one point in the story, she will call herself a superhero, but yes, I think she’s more of an adventurer. She has her own mission and will save someone if they are in trouble. But it’s not like Jupiter Jet is going to go on patrol every night.

CC: DId you set out to create an “all ages” book or did it evolve into that?

AVR: For Jupiter Jet – yes! The things I write tend to swing wildly between All-Ages and DEFINITELY NOT All-Ages. Some of the best comics are all ages (Batman Adventures, Chuck Dixon’s Robin, Ms. Marvel, America), and Jupiter Jet sprung from a shared love Jason and I have for that style of storytelling.

CC: How are you handling the writing of the book? Are you taking turns writing issues or are you writing each issue together?

JI: Ashley and I plot out the beats of each issue together. Then Ashley always tends to take the first draft because I hate staring at an empty white page. I follow her draft up with my second draft and a big focus on dialogue. Then we team up for however many more drafts we need usually splitting the pages for the final one. 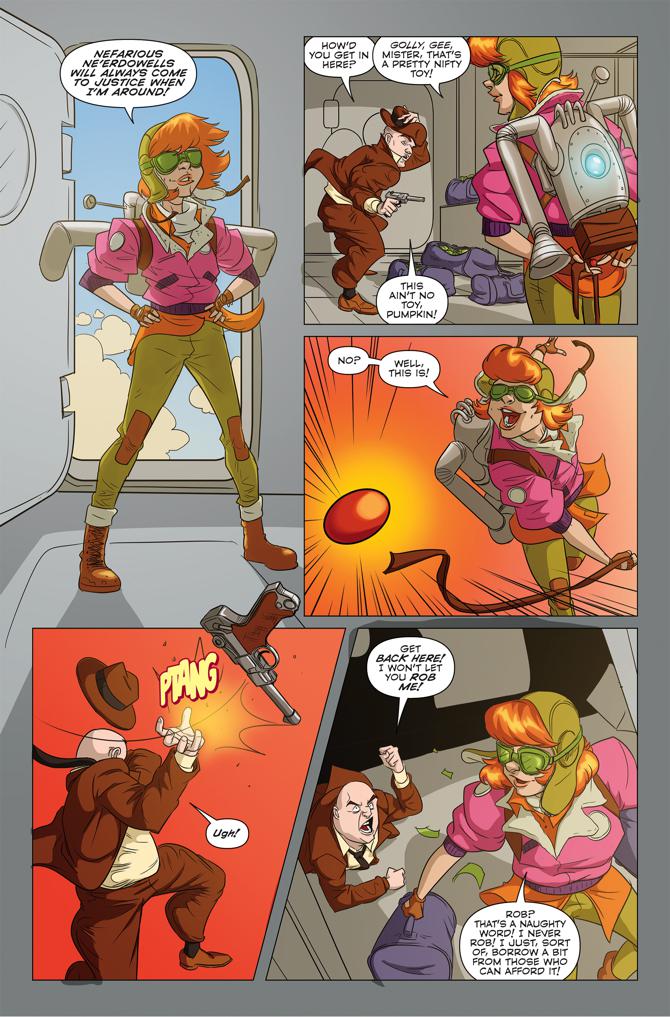 CC: Jacky’s morals seem to be more on the taking from the rich and giving to the poor side of things right now. Will we see her evolving into something different or will she further embrace her Robin Hood thinking.

AVR: In the first volume Jacky’s morals will remain very much at the maturity level that we’ve met her at. Here she is 16 and she sees the world from that perspective. By the end of this first adventure Jacky learns that the world is bigger beyond her front door and her concerns will shift exponentially.

CC: Will Jacky have a “Robin” to her Batman in the near future?

AVR: All I will confirm is: yes AND we know what that character’s hero name will be.

CC: Why is it important for you to deal with the hero realizing that the world isn’t what she thought it was?

JI: It’s the journey that we all go through and we thought it might be an amazing parallel to see that through the eyes of a superhero. 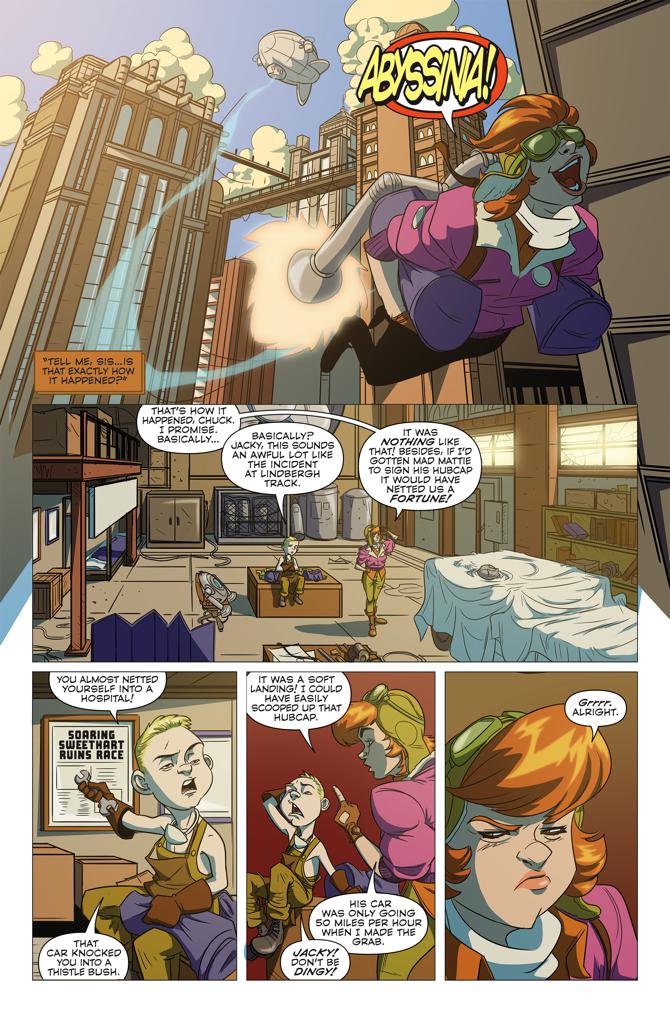 CC: I see a combination of both your personalities in Jacky (Jason’s energetic pluckiness and Ashley’s serious determination). Was that intentional or did she just naturally evolve that way.

JI: I actually see Jacky as very close to what Ashley was like at 16.

AVR: You are both so sweet because I view Jacky as just so much better than me. I tend to think of Chuck and Gabriel as being more like Jason. It’s hard to see these things sometimes when you’ve lived with them for so long.

CC: If you could have Jacky cross over with another super hero who would it be? Who would she get along good with?

AVR: Sailor Jupiter would be amazing just for the potential titles of that crossover.

I’d love to see her crossover with Maps Mizoguchi from Gotham Academy because she is one of my favourite all time characters.

In a weird crossover I’d love to send her to the Bone planet. 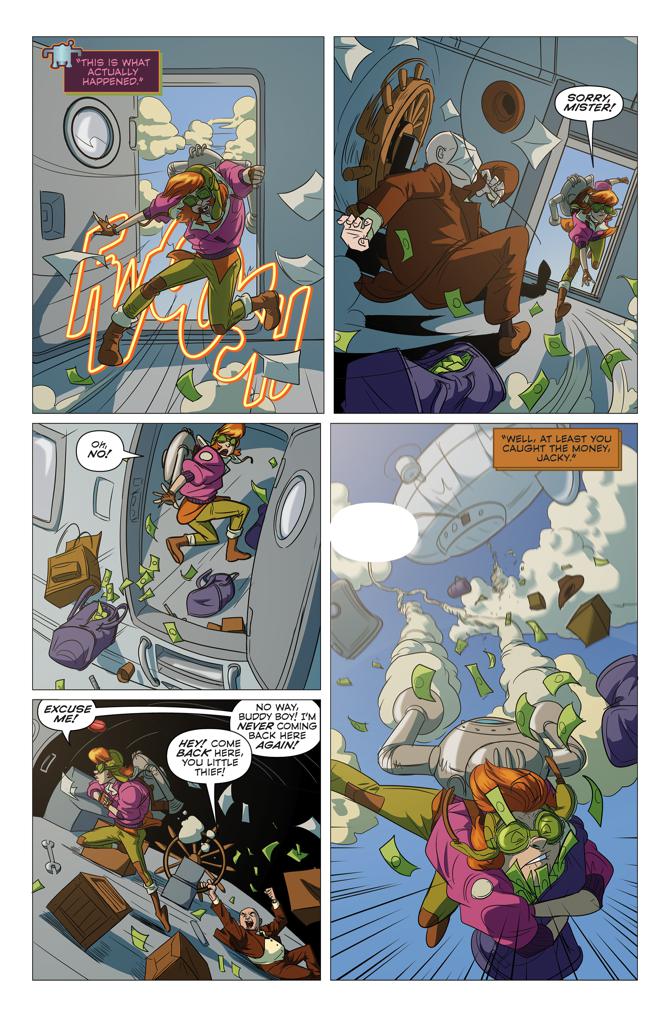 CC: Will this be an ongoing story or just a limited run?

JI: This is a five issue mini-series for now. But in a perfect world if everyone in the world buys Jupiter Jet (run to the comic stores, kids!) Jupiter Jet would be five volumes. This mini-series being volume one. We know where this is heading. Plus, I’m really really want to share with you the villain of volume 2.

CC: What was the most important aspect of the story for you to include/tell? What do you hope that readers get out of Jupiter Jet?

AVR: The grieving process. Jacky and Chuck are orphans who recently lost their father. I lost my father at the same age Jacky did and although that aspect of her character isn’t at the forefront it was important for me that we illustrated what that was like because mental health issues like that can be tough to address.

JI: The idea of Jacky’s family was very important to me. I really wanted the relationship between Jacky and her brother, Chuck, to be real. By grounding her with her brother, it allowed us to go crazy with some of the more fantastical elements that Jupiter Jet comes across.

My hope is that readers will smile while reading Jupiter Jet. If you crack a smirk as Jacky flies high into the sky, then I think we accomplished our mission.

CC: What would Jupiter Jet’s 10 cent origin be?