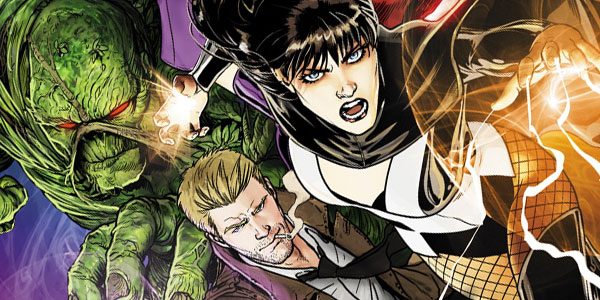 Forever Evil may not be quite over, but some inklings of what comes after have begun to creep into DC Comics’ books, including that of at least one Justice League team! As writer J.M. DeMatteis continues to explore the characters that make up the magical side of the World’s Greatest Super-Heroes, he shared a little bit about the new make-up of the team, the female heroes that now comprise 50% of the group, and just what it’s like to write the House of Mystery! 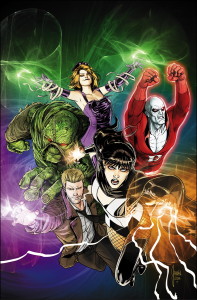 Matt Santori: Thanks so much for taking the time to chat, J.M.! Justice League Dark #30 is a brand new start for the team, but you’ve already had your hand in for months. What are your thoughts on the mission statement for the book going forward, now that the Forever Evil crisis is over?

J.M. DeMatteis: I came on the book at the launch of Forever Evil: Blight, so, the truth is, this issue is my first chance to do something that stands alone.  The fun of Blight was that the story was huge and we had so many wonderful characters from the supernatural corner of the DCU to play with.  I don’t think I’ve ever enjoyed working on a crossover as much.  (A lot of the credit for that goes to my co-conspirator, Ray Fawkes, and our amazing editor, Brian Cunningham.)  But it’s nice to kick back, relax and just focus on Justice League Dark without worrying about ten thousand other characters and plot lines.  If there’s a mission statement, it’s this: character, character, character.  I want to shine the spotlight on each individual member of our team and have fun exploring their  psyches.

MSG: Seeing Zatanna take charge of the team seems to be the latest move in an attempt to return the character to stronger “traditional” super-hero roots, and away from being simply a stage magician called to sorcery in emergencies. What are some of your influences or favorite moments with Zatanna over the years and how are they impacting your thoughts about her character?

JMD: I have to be honest:  I’ve been aware of Zatanna for most of my comic book reading life, but she was never a character I knew all-that-much about. Most of what I do know comes from reading Jeff Lemire’s wonderful run on JLD.  Zee was pretty much out of commission during Forever Evil (although she was constantly being talked about. In some ways, she was the pivotal character, certainly where Constantine was concerned), so I’m very excited about finally having a chance to bring her to the next stage of her development.

As soon as Zatanna reappeared at the end of FE: Blight, I clicked with the character — her voice came through very clearly — and, now that she’s stepped up and taken over the JLD, she really is the glue holding the team, and the series, together.  There’s a lot we don’t know about post-New 52 Zatanna and I’m looking forward to unfolding her new mythology. 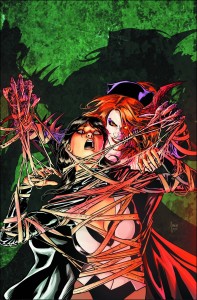 MSG: Nightmare Nurse is a fairly new character, of whom you are a co-creator. What is the potential you see in having a healer on a magic-based team, and what role overall do you see her serving in the book?

JMD: Our first post-FE storyline focuses on Nightmare Nurse.  Being a brand-new, and very mysterious, character, there’s unlimited potential there.  I can take Nightmare Nurse in any direction I want, unfold her back story slowly, and have a lot of fun along the way.  She’s a healer, yes, but she’s also dark, dangerous and so much more than she seems. We hinted at her back story in Forever Evil, but we’ll be learning a lot more about her soon.

MSG: One of more recent trends at DC Comics post-Forever Evil has been to reintroduce each team with equal (or nearly equal) ranks of male and female characters, including Stormwatch, The Others, Teen Titans, New Suicide Squad, Justice League United, and now Justice League Dark. Is this as organized a trend as it seems, and either way, what are your thoughts on how it impacts the dynamic of the book?

JMD: Nope.  There was nothing conscious or coordinated there.  Brian Cunningham and I talked and came up with the group that interested us the most.  It just worked out that there was a nice male-female balance there.

I’m especially happy to have Swamp Thing on board, as he’s one of my all-time favorite DC characters.

I almost wrote the Swamp Thing series — twice! — back in the 80’s, so it’s nice to be able to finally spend some time with Alec Holland.

MSG: Speaking of characters, the House of Mystery itself seems to have a life of its own that’s pretty significant for the book’s narrative. How do you approach that setting in working on stories? 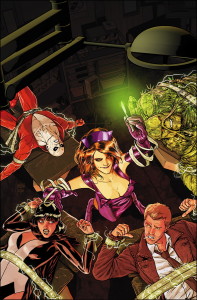 JMD: As soon as I started writing the series, I realized that the House of Mystery itself was a fascinating character.  It seems to resonate with, and reflect, the psyches of the team members; especially the team leaders.  Yet we don’t really know what the House is.  That, to me, makes for great story fodder.  In fact, we’ll be exploring some of the mythology behind both the House of Mystery and the House of Secrets in the Justice League Dark Annual, which will be out in the fall.

MSG: With Constantine having left the team — but never, it seems, that far away — will we continue to see his shadow cast over the members of the team, particularly since each of the remaining four seem to have a very personal connection to him?

JMD: No matter how hard everyone tries — and they’re really trying! — they can’t get rid of John Constantine. So, yes, he will continue to cast a long shadow over the book.  And you’re right — everyone on the team right now has a deep personal connection with him.  And those connections are, for the most part, very conflicted.  Which makes for great stories.

JMD: As mentioned, we’ve got a Nightmare Nurse-centric story coming up and we’re following that up, over the summer, with a Deadman two-parter that will focus on his connection to Nanda Parbat.  After that we’re going to roll into the aforementioned Annual (which features Frankenstein, Black Orchid and Andrew Bennett, along with our regulars) — and that, in turn, will lead into a very big story that will carry us all the way to the spring.   So lots of great stuff ahead.

I have to mention our new artist, Andres Guinaldo, who’s doing a terrific job.  It’s not easy following Mikel Janin — one of the best artists in the business, as far as I’m concerned — but Andres has accepted the challenge and is doing superb work. Very happy to have him aboard.

J.M. DeMatteis is the monthly writer of Justice League Dark, as well as Trinity of Sin: Phantom Stranger, for DC Comics. He is also co-writer, along with Keith Giffen, on DC’s Larfleeze and Justice League 3000 titles.