Heavyweight writer J. Michael Straczynski announced at Comic-Con in 2012 that he would be reviving his Joe’s Comics imprint and on May 1, 2013 the return will be official. Straczynski will team with Ben Templesmith to bring Ten Grand to store shelves, a tale of a mob enforcer willing to go to great lengths for love. Straczynski was kind enough to take time to discuss the series and what readers can expect from Ten Grand with Comicosity.

Aaron Long: First off, thank you for your time! Ten Grand focuses on mob enforcer Joe Fitzgerald who is looking to leave his life of crime after one final hit. Can you discuss where Ten Grand will be taking Joe, and what he’ll be up against in the book? 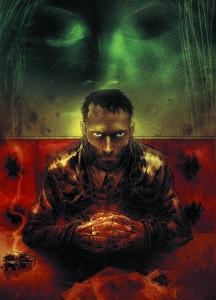 J. Michael Straczynski: When he was working for the mob, before Laura came into his life, he was a button man. There’s a subtle difference between a button man and a hit man; the latter goes after anyone if the money is right, whereas the former eliminates guys from other crews, competition or targets that are posing a threat to his boss. A hit man goes after anyone, including civilians, but for the most part, a button man works mainly inside the structure of the mob.

Joe and his love Laura were killed in the aftermath of his last job, which went wrong when his target turned out to have supernatural connections. In his dying moments, an angelic entity offered him a chance to be, for lack of a better term, Heaven’s button man. In return, every time he dies a righteous death (and is later revived), he gets five minutes in heaven with Laura. Given that each death is acutely felt, every bullet is felt, every knife cut, It’s kind of a cool question: how far are you willing to go for love?

AL: Joe seems like a man with quite a past, and most likely some secrets. Was Joe destined to work that last hit by the forces now in play in his life, or is he a victim of being the wrong guy in the wrong place at the wrong time?

JMS: In issue three, we’ll begin to sow the seeds indicating that this wasn’t strictly an accident, that his boss may have thrown him out there as a sacrificial lamb…and that Joe wasn’t very happy when he found out the truth later. 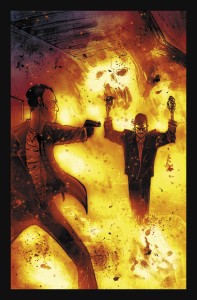 AL: Can you discuss the world of Ten Grand? Is the book set in the regular world as we know it or are more supernatural elements in play that what is just affecting Joe?

JMS: It’s the regular world, but one still has to define what “regular” means. The supernatural still exists in the shadows, and the demons that religion have insisted for thousands of years walk among us are still there, plotting and planning and looking to pounce on the throat of the world. In issue one, he’s hired by a young woman to help find her sister, who has joined a cult named Divine Will, and has closer connections to hell than to heaven. In pursuing that case, he stumbles upon a much larger and more dangerous situation that has massive implications for pretty much the entire planet, and which threatens to tear down the foundations of Heaven itself.

AL: How did Ben Templesmith become involved with the Ten Grand?

JMS: I asked him. I’ve been a fan of Ben’s work for a long time, there’s such power and grace in his work, even when it leans toward the violent and bloody. The depth and texture there creates a unique and vital world, and I wanted that for this issue. I also wanted to step outside my comfort zone, which has traditionally been working with artists who have a fairly realistic approach to the work. So as a result, Ten Grand looks like nothing I’ve previously been involved with. Ben has really brought his A-game to the book, and it’s just freaking beautiful.

AL: Ten Grand is the flagship book for the return of Joe’s Comics. What made now the right time to fire up your imprint again, and can you discuss what went into selecting Ten Grand as the first release? 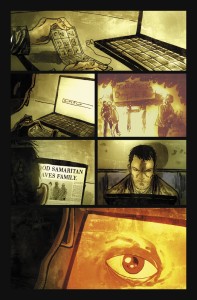 JMS: With the launch of Studio JMS last year, it seemed like the right time to pull these disparate threads together. There are a lot of folks who have a bigger footprint than I do in film, or tv, or comics…but nobody who has the same footprint in all three. So when I put forth the first two, it made sense to bring in the third part of that. I’ve been looking for the right moment to bring back Joe’s Comics for the last five years or so, and this gave us the framework to finally do it.

As to why go with Ten Grand first…in some ways it was the riskiest of the books to pick for a launch, and I’ve always been a big believer in taking chances. The safe way would’ve been a superhero book, since that’s what I’m known for, more so than horror/gothic stuff…but where’s the mileage in doing what’s safe, what you and the readers know you can do? Far more entertaining and exciting to go for the high wire without a net, and that’s what we decided to do: a book that looks, reads and feels like nothing I’ve done before. What’s kind of cool about that timing is that not long after we began to move forward on Ten Grand, DC took down most of the Vertigo line, and that’s exactly the sort of audience that would like Ten Grand, so that decision couldn’t possibly have been better timed. If you like Vertigo books, then you should definitely check out Ten Grand.

AL: Are there any last words or teases you can share with Comicosity regarding Ten Grand?

JMS: We’re looking to play with how comics are written, printed and generally made, experimenting with new toys as we go. So for instance, when you buy an issue of Ten Grand you will find a QR code in the back of the book that links directly to a full audio performance of the dialogue from the book. This way, you can either read the book on its own, or simply sit back and enjoy Ben’s amazing art while you listen to the story being acted out by some of the best voice actors in the business (Robin Atkin-Downes, Tara Platt and Yuri Lowenthal). We have other experiments we want to try in the future. Some will work, some won’t, but that’s the fun of trying new things, and we hope that readers will join us for this journey.