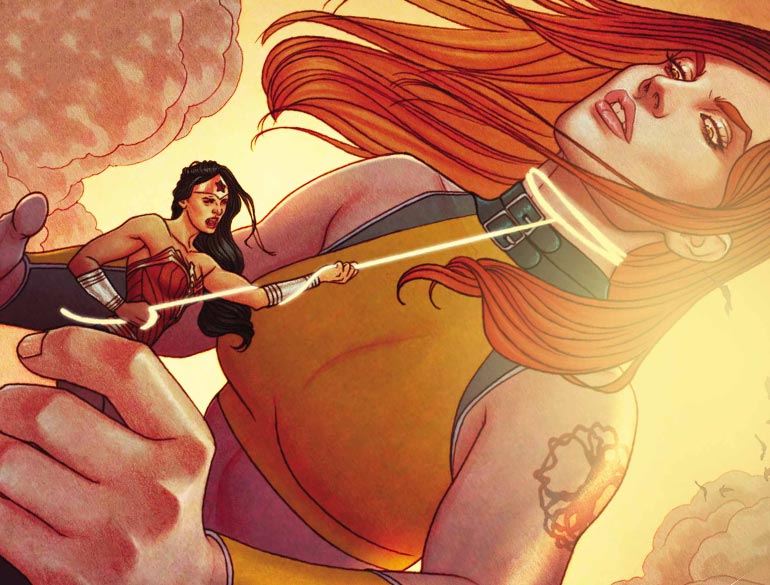 It’s been over a year since Geoff Johns dropped the bomb in Justice League and DC Universe: Rebirth. Not only was Grail, daughter of Darkseid, born on Themyscira in the same early hours as Diana, but Diana herself did not come into the world alone. Her younger twin, Jason, was also born of the union between Hippolyta, Queen of the Amazons, and Zeus, King of the Olympian Gods. Flash forward, and nothing is known of Jason past that moment, and Diana’s own history is just being sorted through a massive year-long story helmed by Greg Rucka, Nicola Scott, Liam Sharp, and Bilquis Evely.

Wonder Woman now has set before it a new challenge in the form of a twelve-issue storyline from a new creative team that picks up those threads from the beginning of Rebirth: writer James Robinson, and artists Carlo Pagulayan and Emanuela Lupacchino. Robinson was on hand to chat about his take on the Amazon, how the return of Grail and Darkseid will play out, and what role her siblings — Jason and more — will take up in the title over the coming months. 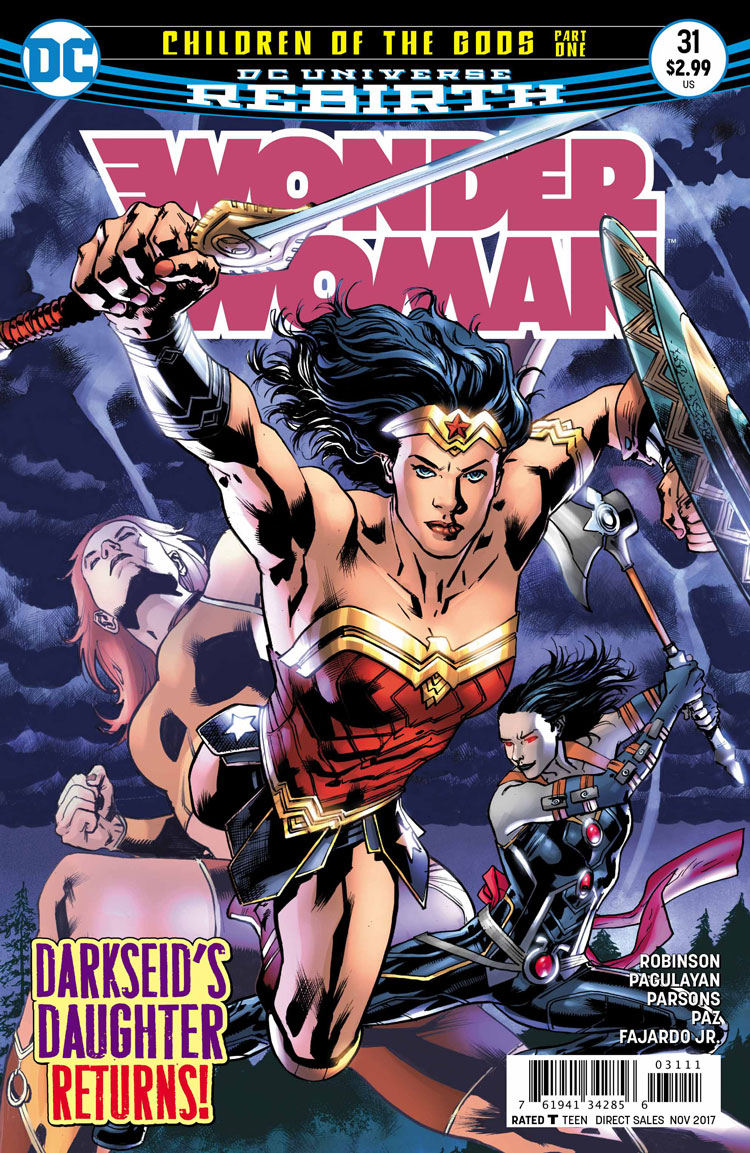 Matt Santori: So, James, what drew you to Wonder Woman and to tell this particular story?

James Robinson: To be completely candid, DC and Geoff [Johns] asked me to do it. I was interested in coming back to DC, so I contacted Geoff and asked if he was interested in me returning. He said yes, and “Do you want to write Wonder Woman?” And I was like, yeah, of course. But it came with the caveat that there were plot points that had been hanging for forever and year, in terms of the Darkseid War and Grail, that they wanted me to address and make the crux of at least some of the stories I’ll be telling.

With that said, those were the things that I was told they wanted to address. I came up with the story around it and the reasoning, but it was DC’s desire that I deal with them.

MS: This is a question I try to ask all new writers on Wonder Woman. Who is your Diana? Is she a warrior, a super-hero, god, ambassador? All of the above? None of the above?

JDR: Well, she won’t be an ambassador in my arc. To be an ambassador, you have to represent where you’re from. With the current continuity Greg [Rucka] set in place where she can’t return to Themyscira, the idea of being an ambassador doesn’t work at the moment.

But yes, she’s a super-hero at times. She’s more so a warrior, and ultimately an icon in terms of being this god-like woman. I make a point of showing children who get excited to see her and waving as the story goes on.

And I think it’s interesting that she’s this woman with the strength of Superman, but she handles things differently. 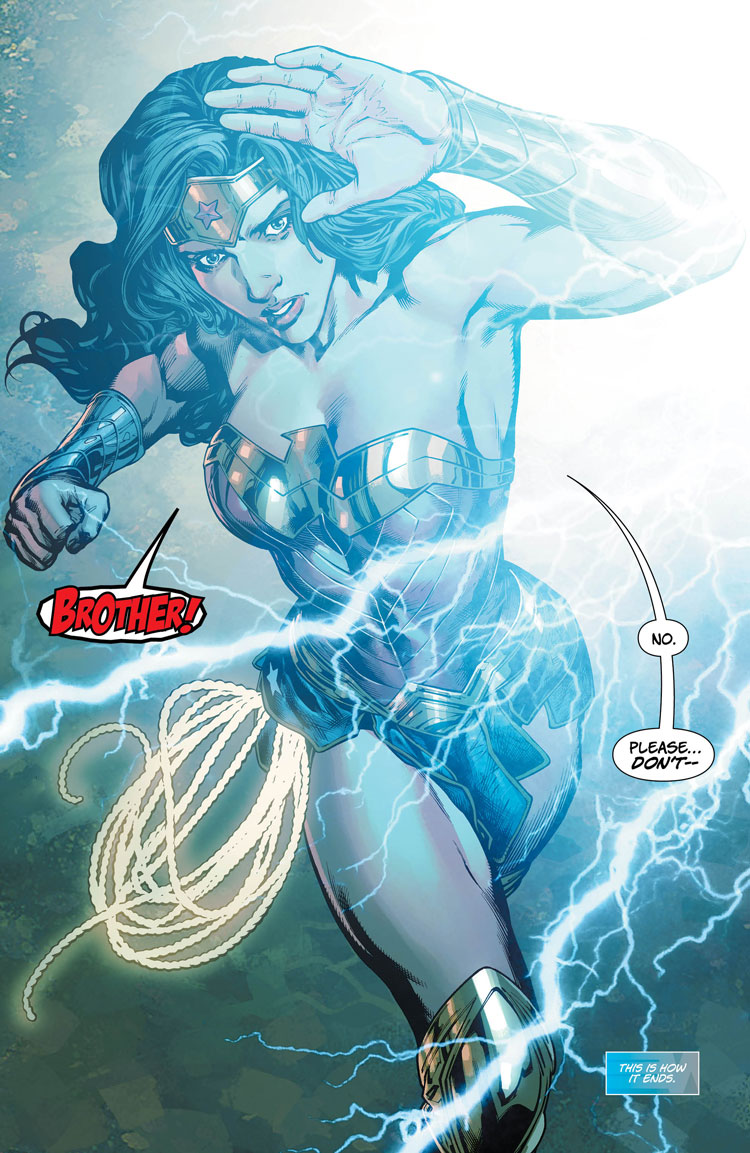 What I’ve always liked about her — and what I think they handled beautifully in the film — is that she has all of this love and compassion and grace in her heart, but when there’s an enemy, she’s the first one in. She’s a fighter. She’s a warrior.

I love that in the movie when they’re in the trenches of World War I, she asks, “Where is the enemy?” And all the guys are saying, “This is No Man’s Land. We have to wait for the right moment to charge.” But she’s like, “What do you mean, the right moment? Let’s go get them!” And instead of pulling them in, she’s already running at the enemy.

That aspect of her strength and battle commitment, juxtaposed with how she’s gentle and caring, makes her kind of a perfect person in a way. That’s who she is for me.

MS: You mention her having the power of Superman, but handles it differently. Can you expand on that?

JDR: I don’t know how much more I can add other than to say, I think women are more interesting and complex in that regard. This idea that she has the basic strength of Superman — but with a complexity about her and this deep sense of compassion and empathy — makes her unique. And these are the things that I’m enjoying working with and writing. 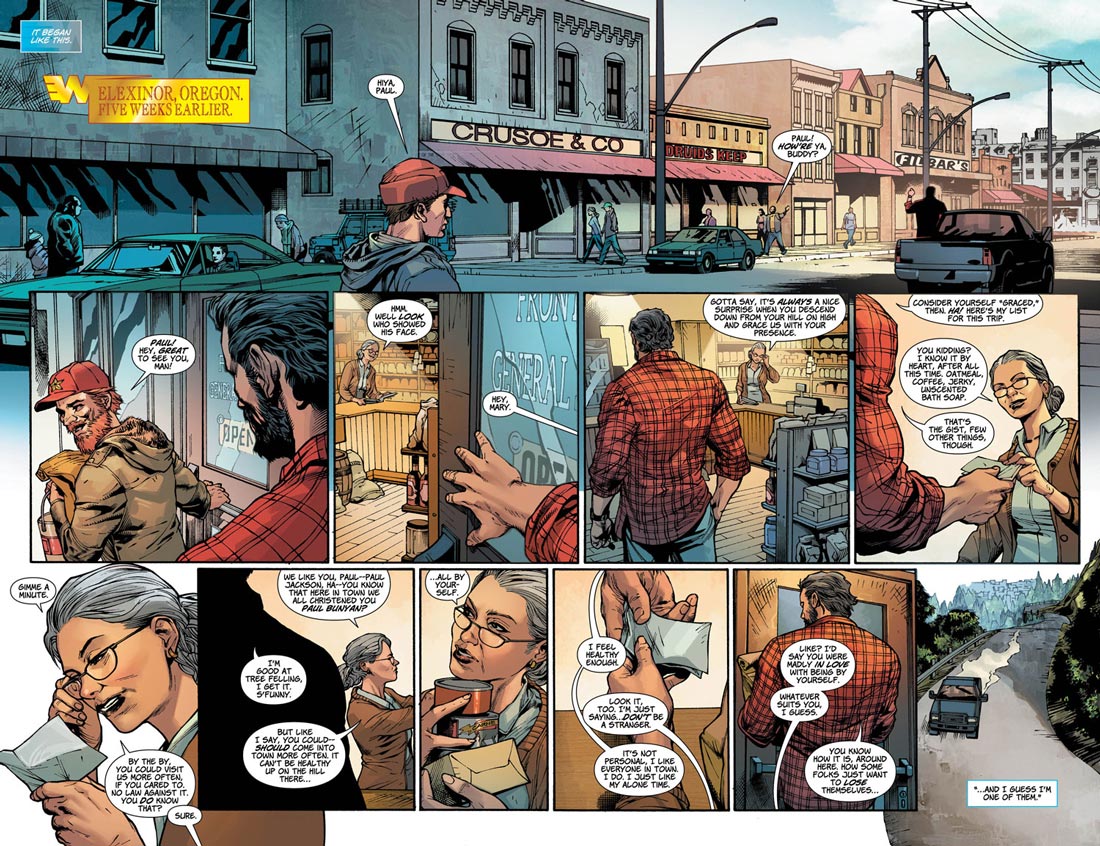 MS: There’s been a lot of chatter, since the announcement of the storyline involving Diana’s twin brother Jason, about the idea of a man shifting focus away from Wonder Woman in her own title. What are your thoughts about that question and the risk involved there?

JDR: I think it’s a legitimate concern. You look at what Greg Rucka, Liam Sharp, Nicola Scott, and Bilquis Evely did; it was such a good job of fleshing Wonder Woman out and making her feel bigger and better and more human and important than she has at many other times. Obviously I’ve seen anger about bringing Jason or other male characters in, so I’ve made a point — even though Jason is a character in the book, as well as Steve Trevor — of making sure that doesn’t happen.

The book is Wonder Woman. That’s her name in the title. It’s her book and I’m making sure that I do her justice, for her sake and for the readers.

One of the things I’m definitely aware of is that yes, people can be fans of Superman or fans of Batman. But the fans who follow Wonder Woman are passionate about her. They just love her. So, I’m being very careful not to diminish her or make her feel less.

MS: The story you’re telling is called “Children of the Gods” and right away it’s clear it’s not just one brother crossing into Diana’s path. What can you tell us about who might pop up?

JDR: Yes, one of the aspects of this storyline is the children of Zeus. We meet one character in the first issue, and of course, both Wonder Woman and Jason are children of Zeus, too. But we will meet other characters along the way who all tie into Grail’s mission and her need to help Darkseid, her father, become the man that he was again. The last time you saw him, he was a baby, so the idea of how to regenerate him and return him to what he was all ties into the children of Zeus.

I’ll also say that people who are fans of winged horses will get to see quite a bit of that as the series unfolds as well. One of Zeus’ children is Perseus, who, as fans of Greek mythology will know, rode a winged horse named Pegasus. So, look out any winged equine lovers, this is the book you’ve been waiting for. 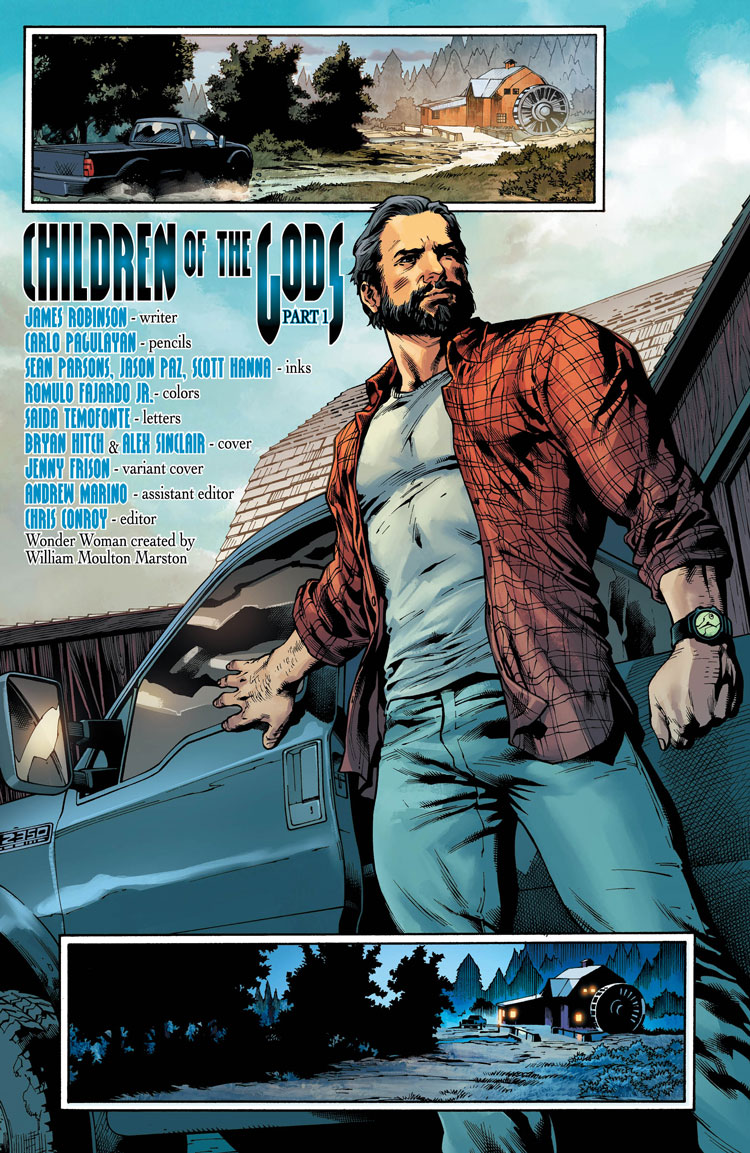 MS: Nice. You mention Grail and Darkseid, and this isn’t the first time you’ve written around the New Gods, having tackled Steppenwolf in Earth 2.

JDR: You know, I never got to write Darkseid in Earth 2. But Grail and Darkseid are kind of like the flipside of Diana and her father. Not like Lex Luthor is to Superman or the Joker is to Batman, but more like a literal, warped mirror image of each other. Grail and Diana are both half-Amazons. Wonder Woman is the daughter of an Old God and Grail is the daughter of a New God.

The idea that they are walking the same path at the same time, but divergently, is really interesting to me. They have some of the same abilities and some different because of who they are and who their parents are.

I should say also that when we meet Jason, don’t expect him to be like Supergirl is to Superman in terms of powers. He’ll be a very different character. He’s not like a male version of Wonder Woman.

But in terms of Grail, I think she’s the perfect enemy for Wonder Woman in terms of powers and physicality. I hope that after I’m done with this run that other writers will keep that in mind. She should be a mainstay of Wonder Woman’s rogues’ gallery. 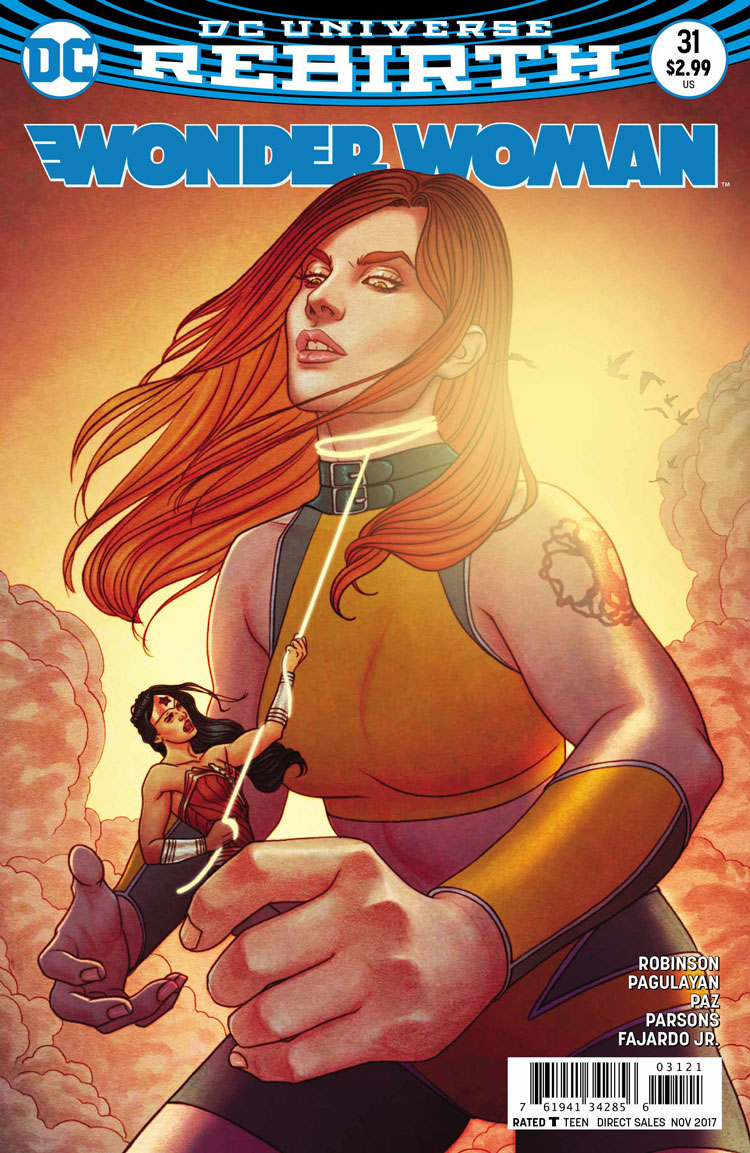 MS: You’re working with two different artists on the series: Carlo Pagulayan and Emanuella Lupacchino. How is each artist’s take different for you and what do you think each of them is bringing to the series?

JDR: Obviously Carlo is a very dynamic artist. He’s done such great work on Deathstroke and other stuff. He’s doing the main continuity.

And Emanuela is on something that I’ve been kind of known for since I did Starman, which are these “Times Past” stories. You know, like stories set in Victorian times, 1940s, 1960s. These are not going quite so far back in time. They’re kind of set in the time between the births of Diana, Jason, and Grail and the events of the first issue. But those issues are what Emanuela is taking care of.

I’ll say this: getting their artwork is a very different experience. Emanuela lives in Italy, and somewhere with easy internet. She’ll send me these pages as she does them, so there’s a gradual unveiling of each issue. With Carlo, I don’t know where he lives in the Philippines, but he literally has no internet. I think he needs to drive into Manila to send us his artwork. So, as a result, you get this gorgeous chunk of artwork that comes every few weeks.

But more importantly, Carlo brings a big, meaty, exciting, bombastic quality, while at the same time bringing a really beautiful Wonder Woman who feels strong and dynamic, but with sublime grace and beauty. Whereas Emanuela, also an amazingly talented artist, brings to these stories of the past a sort of grace and classic quality that really works so well with what I’m trying to tell with those. 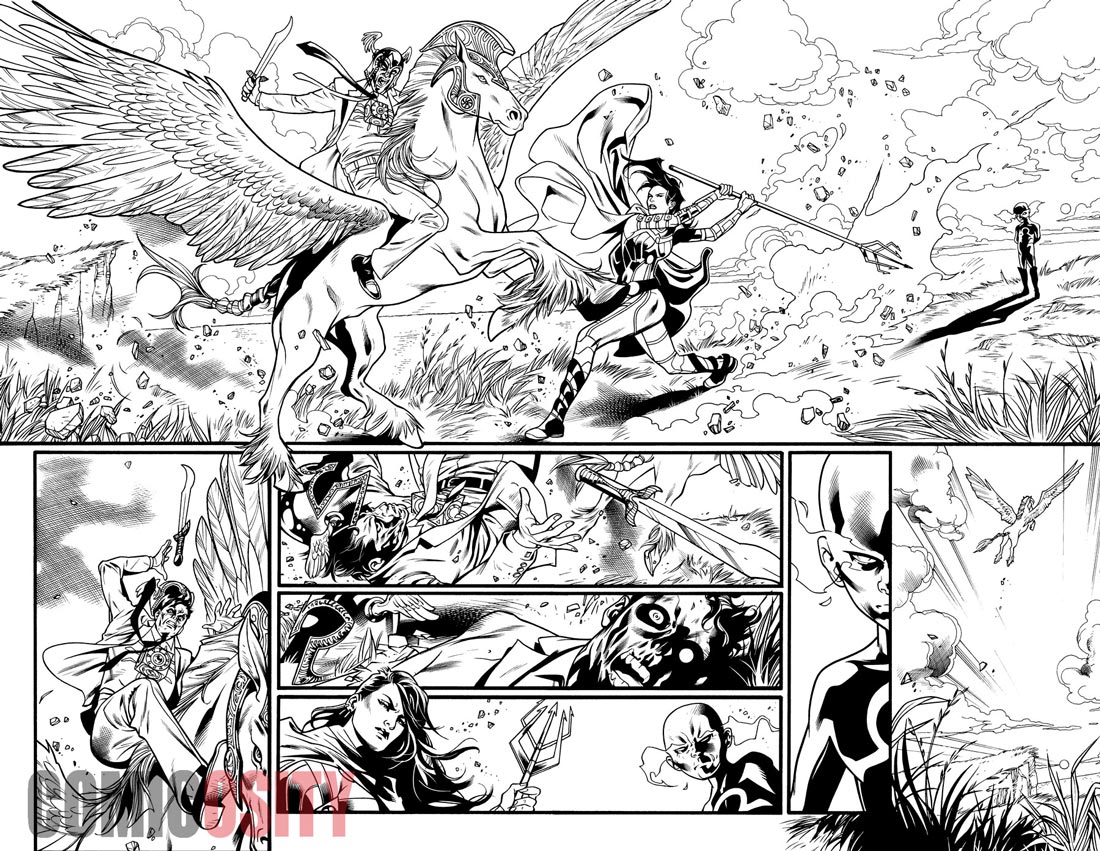 And I don’t want to say this in a way that will scare Wonder Woman readers, but I’m also enjoying writing Steve Trevor. I totally understand that it’s Wonder Woman and it’s her book. But in the way that a good Superman story has a good, strong Lois Lane involved, I think the same thing is true of Steve Trevor here. Again, I take inspiration from what Greg and company did, and also from the movie. We all love that movie, and I think the way that Steve was this strong, interesting foil for Wonder Woman — while not diminishing her or her role — has made me enjoy writing him. And I hope readers can see that.

James Robinson’s first chapter of “Children of the Gods” is out today in Wonder Woman #31 from DC Comics.