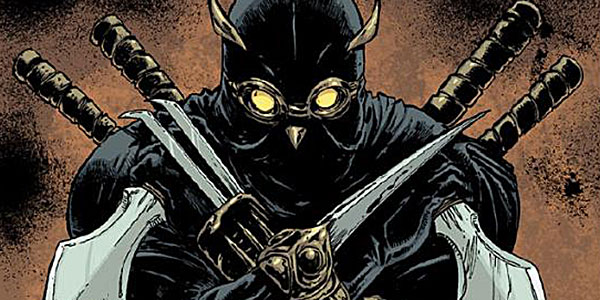 September is quite the change for DC Comics, as it replaces all of its super-hero titles with super-villain specials in honor of their second anniversary of the New 52, but James Tynion IV would be the last to feel slighted. As monthly writer for two of DC’s ongoings Talon and Red Hood and the Outlaws, James lives and breaths darkness — enough so that his specials, Batman and Robin #23.2: The Court of Owls and Batman and Robin #23.3: Ra’s Al Ghul and the League of Assassins, fit seamlessly into his monthly designs. Tynion took time out of his busy schedule to chat with us a bit about what makes a villain and how writing for them is a whole different ballgame. 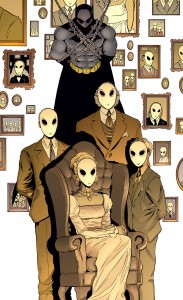 Matt Santori: Thanks for taking the time once again to speak with us, James! As someone who writes characters on a monthly basis that don’t necessarily fall into the neat category of “hero,” like the Red Hood or Talon, is there a difference for you in how you are approaching writing titles specifically focused on villains this month?

James Tynion IV: Absolutely. I spent a lot of time thinking about horror when I was putting these one shots together… Red Hood and Talon might not be the most upstanding stalwart heroes out there, but as a reader, we’re not supposed to be afraid of them. With these one shots, I wanted to access what was most frightening about both of them.

I think that’ll be mostly clear in the Court of Owls one-shot, which is very steeped in horror. They’re a frightening entity, haunting the history of Gotham City, and I wanted to get back to how scary they can be. In Talon, we’re operating under someone who knows their secret, who knows for sure they exist. I wanted to write a story that reminded people that to the world, they’re nothing but a legend — a fairy tale to frighten children. I wanted to capture that outsider’s perspective and remind readers how terrifying they can be when they finally step out of the shadows and into the light.

With Ra’s Al Ghul, the fear comes from a much different place. It comes from his efficacy… The fact that he’s been shaping world history for centuries, and that he’s very good at it. He knows how to pinpoint the moments that will reach out through time and build a world to his liking. In writing him, you need to give him that power, and that depth of insight. He’s operating on levels you can scarcely imagine. If you beat him today, that doesn’t mean he won’t rise up and slaughter your great-great-grandchildren many years from now. That’s where his confidence comes from. He’s functionally immortal, which means in the end, he can’t lose. He looks at the world with a macro view and knows that eventually he will win. 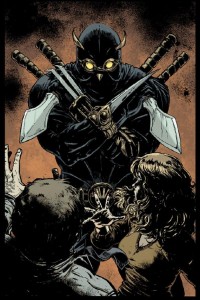 MSG: The Court of Owls is of course one of the bright new stars of DC’s New 52, and feature prominently in Talon on an ongoing basis. How have your ideas of the organization developed in the time since Scott first introduced them in Batman and do you see them as evolving in the pages as well?

JT: The Talon series has offered me the chance to really expand the mythology of the Court of Owls in very basic ways. We never wanted to pull back the mystery entirely… For the Court to be effective and frightening, they need to be primarily unknowable. Anyone can be a member. Any person could be under their thumb. That’s always been the key to building them up. They are the shadow history of Gotham City, and the second you reveal all of their secrets, they’d lose all their power.

We’ve introduced more of their hierarchy, and a bit more about the institutions they’ve used in their history, and I play off of those beats a lot in the one-shot, but the implication is that there are many more strongholds out there — power bases we can scarcely dream of, all over Gotham, and potentially the world. So I think we’ve succeeded in keeping to the core, horrifying mystery they represent in Gotham City, but it’s been fun to introduce new elements that I hope will continue to be a part of their mythology in whatever big story picks them up next. 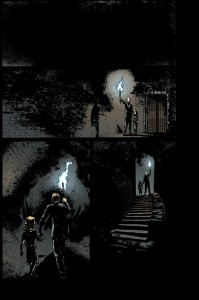 MSG: Both the Court of Owls and the League of Assassins are shadowy organizations, cloaked in a certain amount of historic legend or conspiracy theory. What compels you about this kind of mythology and have been some of your influences in that area?

JT: I’ve always been a fan of the big, secretive, shadowy organizations out there in the DCU and beyond, so it’s been a blast to play with two of the biggest out there. It’s hard to put my finger on what draws me to them so much. I love secret histories, and conspiracy theories… Which isn’t to say I put much stock in them, but it’s always fascinating to hear about who may or may not have manipulated major events in history. I am drawn to large-scale manipulative characters who see things from a macro perspective. To have the chance to play with a bunch of those kinds of characters has been a dream.

MSG: We’re finding out a lot about the League of Assassins each month in Red Hood and the Outlaws, and have recently witnessed Talia’s demise in Batman Incorporated, but we’ve seen little of Ra’s al Ghul himself. Why was the time right to bring him into the spotlight for Villains Month and what’s your personal history with the character?

JT: I’m pretty sure my first encounters with Ra’s Al Ghul came from Batman: The Animated Series, and then probably JLA: Tower of Babel, where I really saw him come into focus as a major world threat. He became a fast favorite for the reasons I listed above. I think I was in high school when I hunted down all the O’Neil issues that created the character and fleshed out his motives and history for the first time. It always impressed me how different he was than any other Batman villain. He represents crime on a global scale, and by recognizing Batman and calling him his equal, he managed to bring Batman’s war to a much larger stage. It totally reshaped what a Batman villain could be. When I was approached to take the character on for Villains Month, I was absolutely thrilled. He’s been taking a backseat to Talia since the start of the New 52, so it’s about time for him to come back and reset the focus entirely on himself. 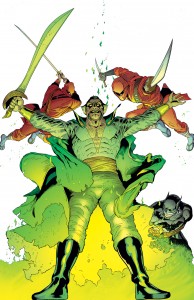 MSG: Batman and Robin #23.3 is described as the origin of Ra’s al Ghul. What process did you go through in determining what to change and what to keep in regard to Ra’s’ somewhat iconic beginnings?

JT: This was definitely a tough question while writing the series, particularly since several key moments in the history of Ra’s Al Ghul have been addressed recently in the New 52. So rather than fumble through retellings of what we’ve seen before, I reminded myself I had 700 years of backstory to explore and develop. So that was my focus, and I think you’ll see what I mean in the issue. The focus isn’t so much on when Ra’s Al Ghul found the first Lazarus Pit, but rather when he began to shape the course of human history to suit his own methods.

MSG: The League of Assassins itself has rarely been as fleshed out as you have done with the group appearing in Red Hood and the Outlaws. How did you go about developing/choosing the roster for the team and among them (Bronze Tiger, Lady Shiva, Cheshire, etc.) do you have any particular favorites to write?

JT: For the ruling council of the League of Assassins, I wanted to put together a broad group that each has its own particular specialties. I knew I had wanted Bronze Tiger and Lady Shiva, given their histories with the organization in previous continuity, but Cheshire has typically been a solo player, and I thought it would be perfect to use this opportunity to reintroduce her. She’s always been one of my favorite assassins in the DCU, and I wanted to get to explore the great dynamic she’s always had with Roy Harper, so she was a shoe-in. 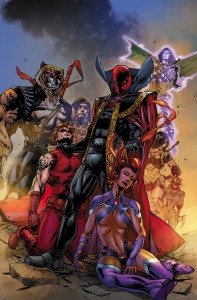 With the two characters I created, Rictus and December Graystone, I wanted to invent the assassins that you might hire to kill a high tech superhero like Cyborg, or a magical character like John Constantine. The key was really to avoid going with the standard faceless hordes of ninjas, like we’ve seen before. I wanted to keep the group rooted to the core of what it’s always been, but also create a wide cast that would allow the League to pop their heads into virtually any title at DC Comics.

MSG: Any special teases or final thoughts to share with the Comicosity audience?

JT: I just really hope people read and enjoy these villains much issues as much as I enjoyed writing them. It’s fun to cast a light on the darkest shadows of the DCU, and show some baddies up to no good without having to worry about one of those dang superheroes showing up and ruining everything.

James Tynion IV is the ongoing writer of DC Comics’ titles Talon and Red Hood and the Outlaws, as well as co-writer of the monthly back-up story in Batman. His first Villains Month special, Batman and Robin #23.2: The Court of Owls arrives in stores this Wednesday.