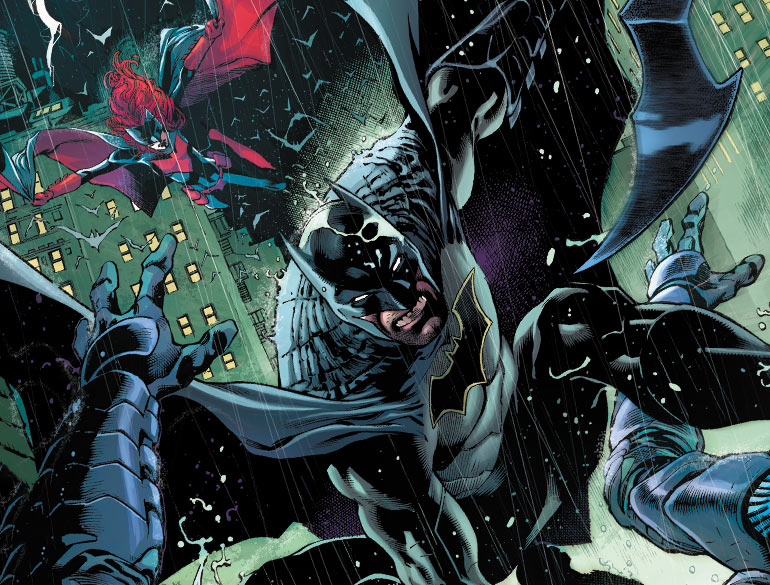 We’ve already seen the debut issue of Detective Comics post-Rebirth, returning the long-running series to its original numbering, and been blown away. With Batman and Batwoman headlining as co-leads, writer James Tynion IV has not only taken on the book from which DC Comics gets its name, but has returned one its most popular characters of the last decade to full-time heroic status. Tynion sat down before his second issue drops to talk about the relationships he’s establishing and exactly why he’s bringing in Clayface as the newest Gotham City hero. 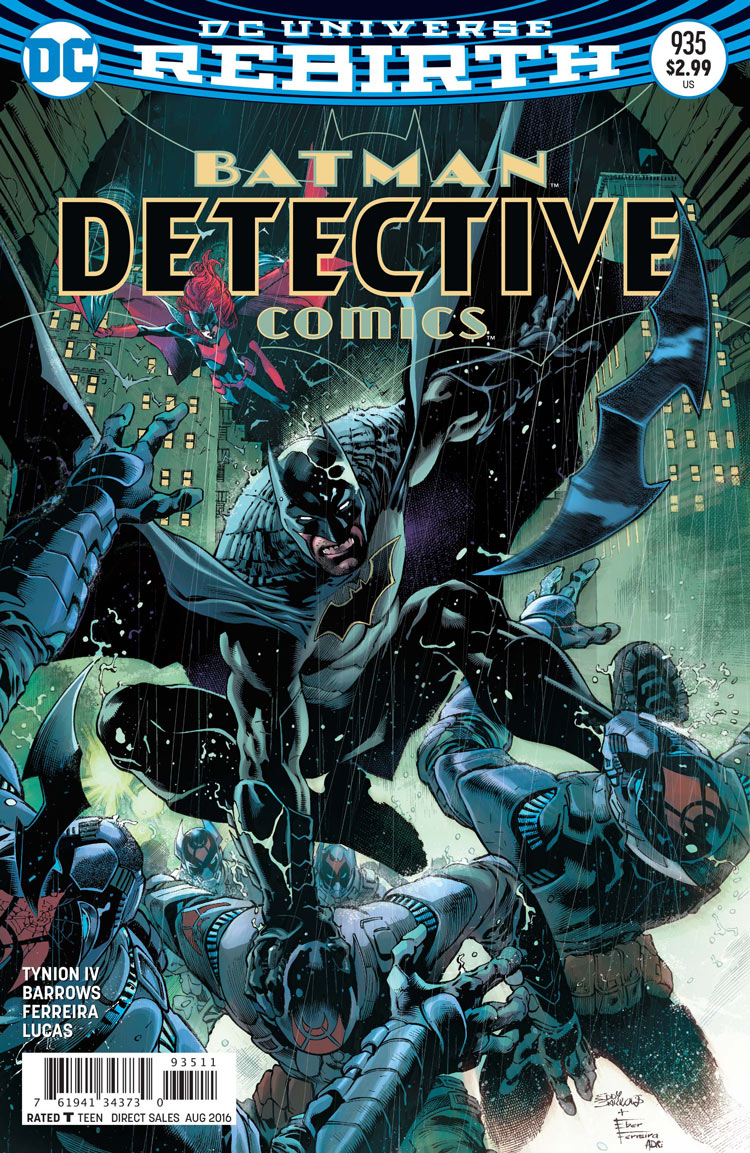 Matt Santori: Given the nature of Detective Comics now, it’s apropos to start off asking about teamwork.

We’ve already seen the first issue and have another issue on the way from the art team of Eddy Barrows, Eber Ferreira, and Adriano Lucas. They put together an amazing package. How has that process been for you as a team?

James Tynion IV: Honestly, it’s been incredible. In the first two issues we have Eddy and Eber. Alvaro Martinez and Raul Fernandez come in with the third issue (#936). Then there will be a bit of back and forth.

Everyone participating in this book is doing the work of their careers. Every issue has a stunning shot. Whenever I see pages come in, they just blow me away. And now that I’m seeing what everyone is capable of, I’m writing to their strengths. It really is something special.

The downside of working on a biweekly book is how quickly I have to turn scripts in. The upside is seeing artwork coming in from two issues of the book at the same time and seeing a full, powerful image of the series coming to life.

I really think this is going to be one of the most beautiful books on the stands from DC every few weeks — from now until forever. And I am thrilled with that.

MSG: In thinking about the book as hosting an ensemble cast and the opportunity that gives you for powerful connections right out of the box, I want to talk a bit about the relationships you’re building, starting with Batwoman and Batman.

JTIV: That was the heart of this book going in. Going back to the introduction of Batwoman, the most prominent queer character in the DC Universe — a badass new Bat-character of the modern era — she’s had some incredible stories told about her. But none of those stories have been about her relationship with the Bat-family. What is the balance between her and Batman? What is the real core of that relationship? 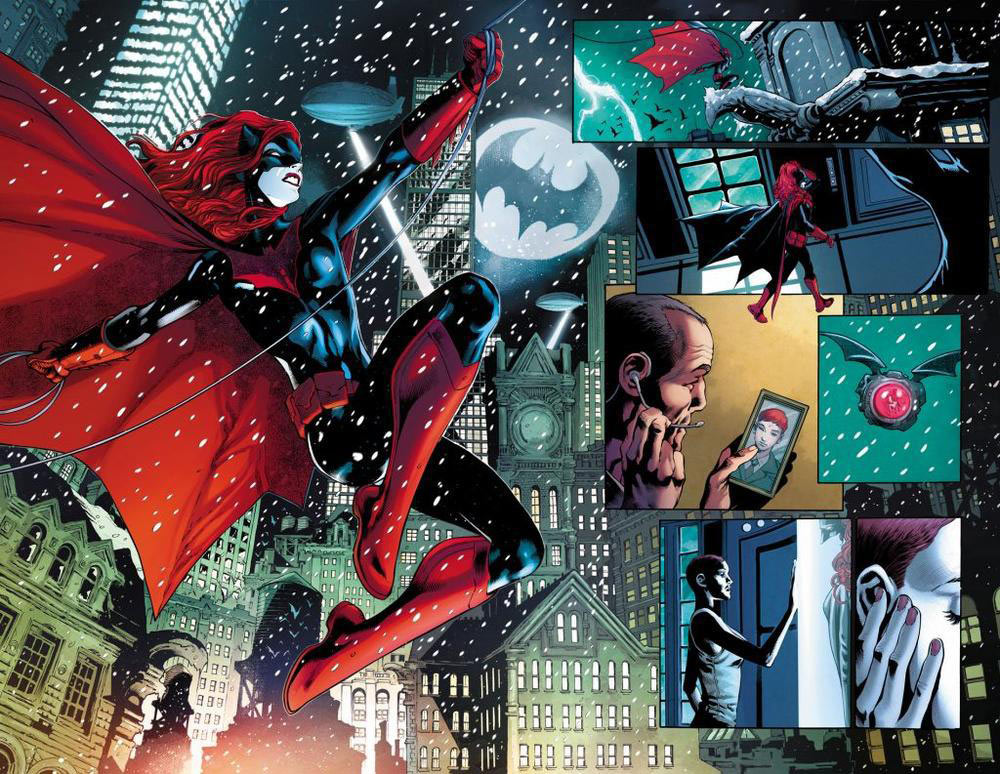 We’ve seen bits and pieces of it, but we’ve never really been able to linger in it and tell a bigger story. That was the biggest goal in what I wanted to do in this book.

And it’s been established in and around the corner of her series that Kate is Bruce Wayne’s cousin. That has HUGE implications, because the relationship between the Waynes and the Kanes is one of the most fraught relationships in all of Gotham City. That goes back to stuff that’s been played with in books like Gates of Gotham, and in stories like “Zero Year.” We’ve seen the struggles between the Kanes and Waynes. Being able to dig into the differences between those two families is one of the hearts of this arc.

The simple fact is that Jacob Kane did not care for Thomas Wayne in particular, and doesn’t care much for his son either. And that’s how Kate was raised. There’s a lot to with there. There’s a lot of power.

Bringing Batwoman back to the forefront was a huge priority, but doing that in a way that let us explore stories we’ve not seen before — but I’ve been dying for since the character was introduced — was the other goal.

MSG: You mention Jacob. What about Kate Kane’s relationship with her father?

JTIV: I’m building off the character as she’s been portrayed the last few years. We’ve seen that relationship go through huge ups and downs. But I didn’t want to focus on the specifics of those ups and downs for the people who maybe didn’t pick up a Batwoman book or her original run in Detective.

If you’re meeting her for the first time, the most important thing is to know that Jacob Kane used to be an Alfred-style figure for her, and due to a major betrayal, she cut him out of her life. But he’s still her father, and they’re still in contact. They’re trying to fix what’s been broken. 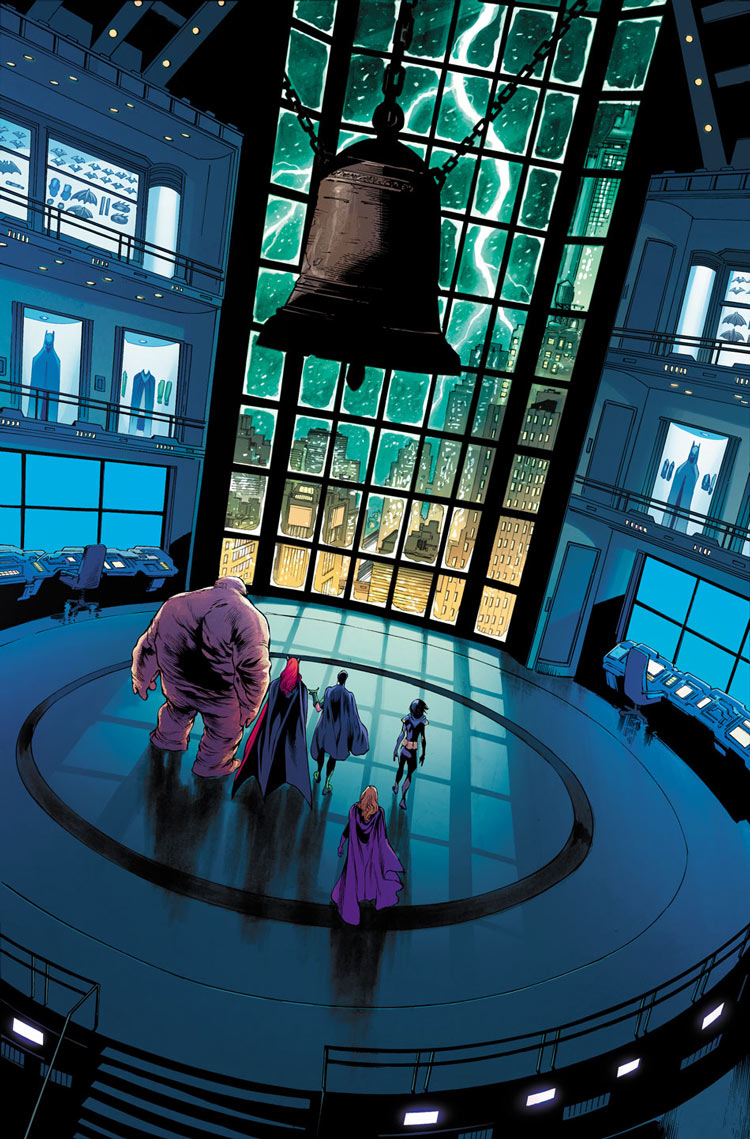 MSG: In next week’s issue, two other relationships definitely are taking center stage, both with Tim Drake on one axis. The first is Batman and Red Robin.

JTIV: That was the other relationship I wanted to play with.

Being able to dig into what Bruce and Tim’s relationship is like in the modern era was really important to me. I think that’s gotten a little confused over the last few years. The New 52 skipped over Tim as Batman’s sidekick, so he’s been off with the Teen Titans and doing his own thing. He’s popped up in Batman Eternal and Batman and Robin Eternal, but he’s had almost no facetime with Batman himself.

I wanted him put right into the heart of that right from the start. And it shows a part of their relationship that’s always been the most powerful to me, which is they are sympatico in their intellect. They are both genius-level characters.

I remember there being a line where Batman realizes that at Tim Drake’s age, he was not as smart as Tim — and what that means for the future. I want to bring that back to the forefront. The fact that Tim is this young genius who has so much potential to be one of the major players shaping the DC Universe. Batman sees that and is trying to help him toward that goal.

There’s also a little bit of conflict in that Batman might have different plans for Tim than Tim has for himself.

So, yep! Tim and Batwoman are the heart of this story, and of this first arc in particular. 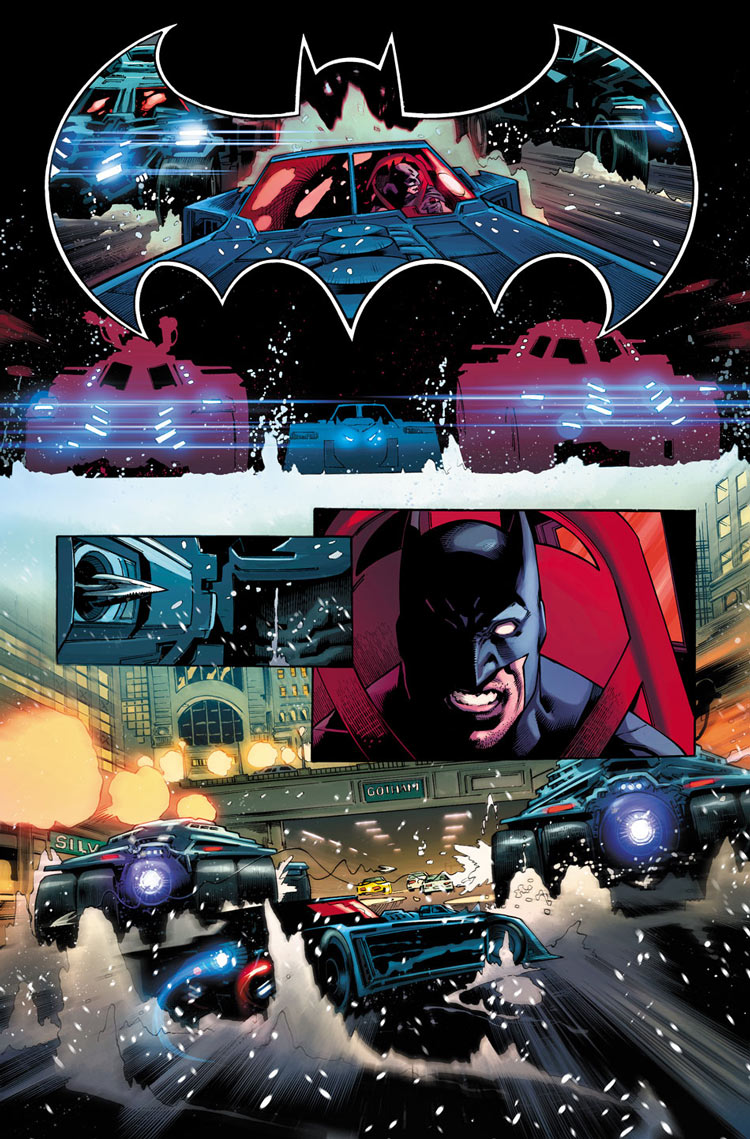 MSG: The other major relationship we see in evidence next week is Red Robin and Spoiler.

If the first arc has Batwoman and Tim Drake with major emotional arcs, the second arc is the Spoiler arc. Bringing Stephanie Brown to the forefront of this series was always one of my major goals.

I got the chance to bring Steph back into continuity with Batman Eternal, but in the second series, she took a backseat. It made sense in terms of that story, but I wanted to get back to her and the larger story I wanted to tell with Steph. The key part of that is reinstating the powerful connection between Tim Drake and Spoiler.

Their relationship has been something that’s driven Batman stories for over twenty years, and it didn’t exist in the New 52. But like a lot of things in Rebirth, it’s about bringing key relationships back to the DC Universe. This was one we knew we wanted. There was a nod toward it at the end of the first Eternal series, but I’ve been waiting to do this for a long time. 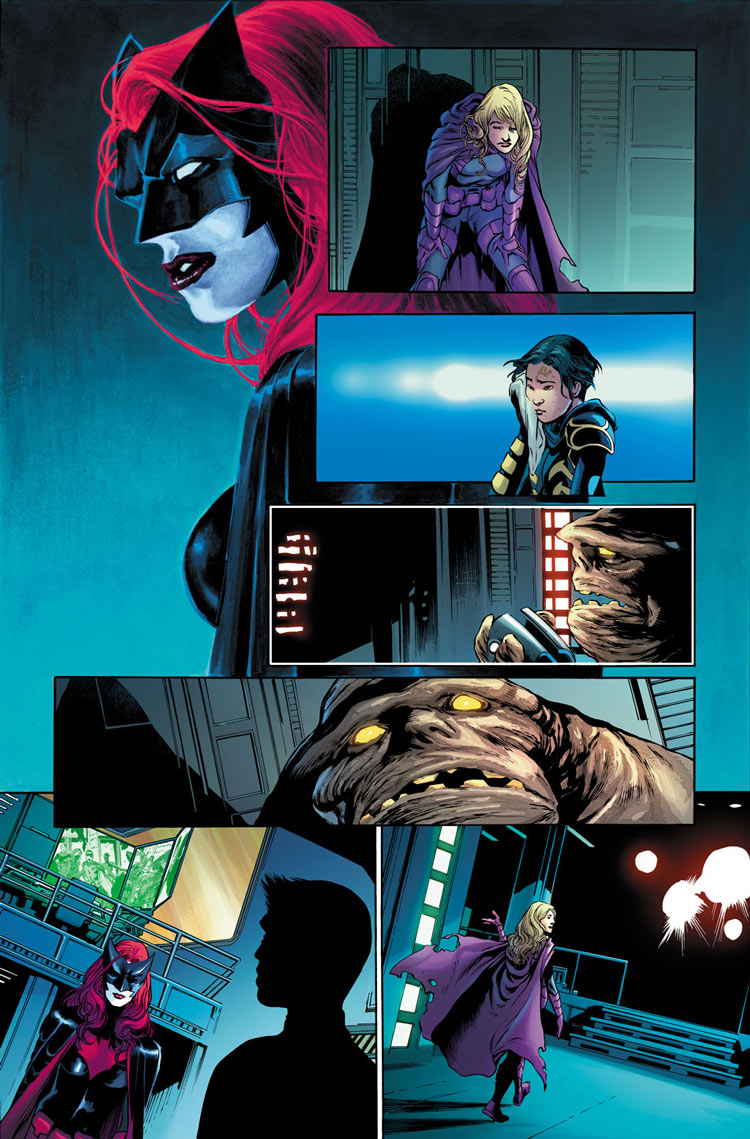 MSG: Well, my last question is really about the oddball you have brought into the cast — Basil Karlo, Clayface. He has a very particular relationship to his body. Can you speak to that specifically?

JTIV: There is real power to the idea that an accident — something you did not intend — makes you look to the world like a monster. And then letting yourself slide into that role. Everyone thinks the worst of you, so you become the worst you.

In this story, we get to see Batman as the guy who sees the best of you. The fact that there is a chance for redemption is really important here, not just for Clayface, but across the whole book.

Batman has secrets. He’s always going to have secrets. Trust is not the thing Batman is best at. But in terms of this book, I’d rather tell the story of what happens when a bunch of young heroes in Gotham City come together and want to train — instead of Batman saying “no,” I wanted to see what it looked like for Batman to say “yes.”

The biggest show of optimism from Batman could be him believing that one of his villains could become a hero. Clayface is different from a lot of them, because he falls into the role of the tragic character. He isn’t just mindless, faceless evil. He’s lost himself, quite literally going back to his appearance in Scott Snyder and Greg Capullo’s Batman. He’s lost his ability to even hold his form as Basil Karlo.

He’s lost himself, but now he can pull himself back together. He can be something more. There’s a lot we can dive into with that, and a lot of story potential I’m really, really excited for.

The entire cast, everyone we’ve talked about — including Cassandra Cain, Orphan, who is the focus of our third arc — have a lot of big stories coming up in this book. You’ll just have to wait and see. And I can’t wait for people to see them!

James Tynion’s Detective Comics ships every other week, with issue #935 arriving in shops and online on Wednesday, June 22.