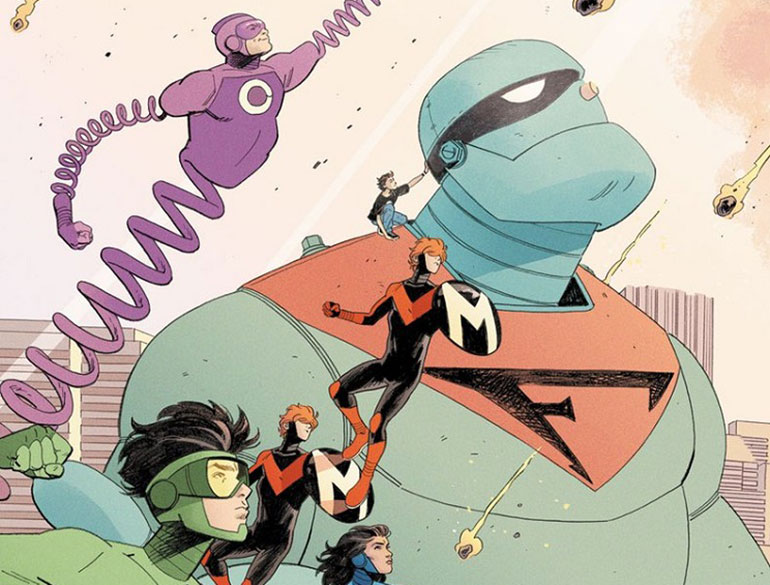 Space Ghost. Birdman. Jonny Quest. Frankenstein Jr. The Herculoids. Mightor. There’s A LOT going on in Future Quest, the flagship book for DC Comics’ revitalization of the Hanna Barbera line of properties. And at the center of it is writer Jeff Parker, who’s collaborating with a team of artists (and doing a little art himself) to bring these characters to life. Parker sat down with Comicosity to share a bit about how the series is going for him, what fans can expect from Frankenstein Jr.’s arrival, and what prompted the addition of a brand new secret agent to the mix. 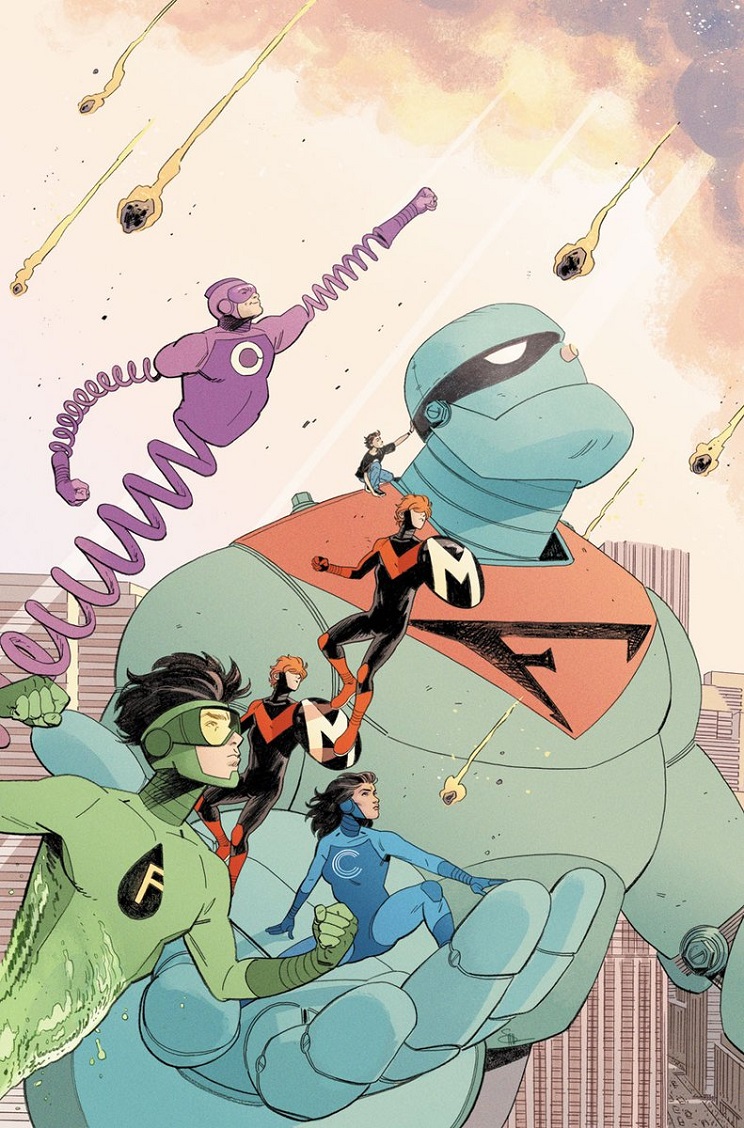 Matt Santori: Going into issue #4 of Future Quest, you have a handful of issues under your belt where you’ve been blending these really disparate properties together. Tell me how you feel like that’s been going for you.

Jeff Parker: It was worrisome at the beginning, you know? But what helped at the beginning was when Darwyn Cooke did that piece where everyone was together. Just seeing them all together in one space kind of helps.

Like, Jonny Quest was always telling you what the science was supposed to be, whether that worked or not. Space Ghost never did. Fly around, turn invisible, shoot things. Eh.

But it’s one of those things you just kind of have to sit with at first. But once Doc Shaner starts drawing, they take on a life in my head. And I’ve worked with him enough that it just starts to make sense for me. Writing out a concept as a sentence is just not as good as visualizing for me. So, a lot of times I’ll sit there and doodle myself to get a take on the character.

But once you start realizing that you’re dealing with a universe of characters, the bigness of it all helps. You realize that everything doesn’t have to feel like it was created together, just like everyone in the world doesn’t have to feel like they’re all from a common background. You just start to understand the universe you’re building and with every page, it becomes more solid. It gets easier as you go along.

MSG: You’re also blending a ton of artists in the book, really seamlessly I might add, which is such a pleasant surprise. Doc Shaner, Steve Rude, Ron Randall, Aaron Lopresti — and yourself! How’s that process been?

JP: I kind of obsessively stalk artists on line. [laughs] It’s easy to tell who the people are that are doing this kind of adventure stuff.

The book is sort of a functioning anthology as an ongoing story, which is kind of neat. I don’t think I’ve ever told a story that way before. Maybe a little in Agents of Atlas. We just asked ourselves what artists could work and function in orbit around our anchor artist, Doc Shaner. It doesn’t have to look like his art, but it does have to feel “of a piece,” you know?

We’re seeing a lot of the same influences and same goals. And of course, color helps a lot. Jordie Bellaire is really making stuff go together like magic. 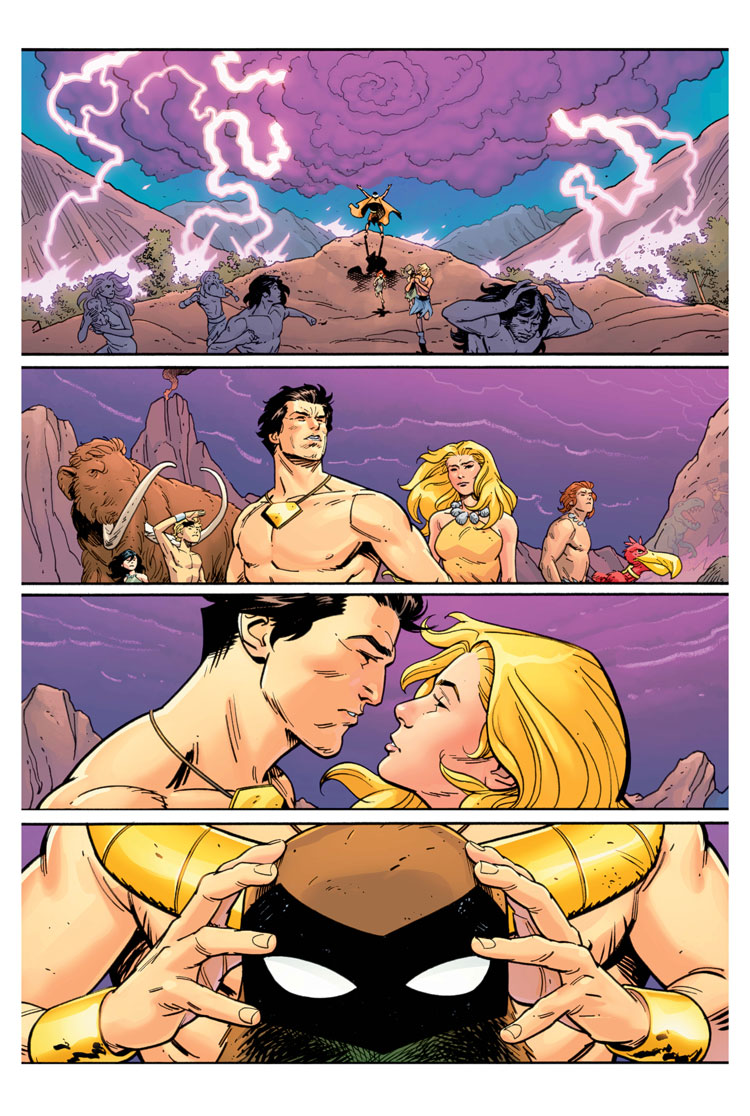 So, I dunno. You know how some artists have kind of an ugly worldview? That wouldn’t work here. You’ve got to get people who don’t necessarily draw alike, but have an optimistic feel somewhere in their work.

As for me, I’m just so rusty, that I’m going to redraw stuff until I get it right. I really got into it and was enjoying it. I purposely picked a scene that was all about the villains. It doesn’t have any of the heroes that everybody else is going to want to do. I just wanted to focus in on Doctor Zinn and the villains.

JP: Yeah, Doctor Zinn was a recurring character in Jonny Quest. We’re fleshing him out more and giving him a lot more depth. Although Doug Wildey did give us quite a lot to work with.

If you go back to those drawings, on the surface he seems like that classic Cold War, Chinese villain of the time. It was the 60s — beware the communists, blah blah blah. And certainly there’s still going to be some of that DNA for the character floating around. But our background for Doctor Zinn is pretty different.

What Doug Wildey was doing back then in the original series was pretty progressive, but the voice actor kind of throws all that out the window and gave him a ranting villain voice. And that’s not the way I hear him in our story. 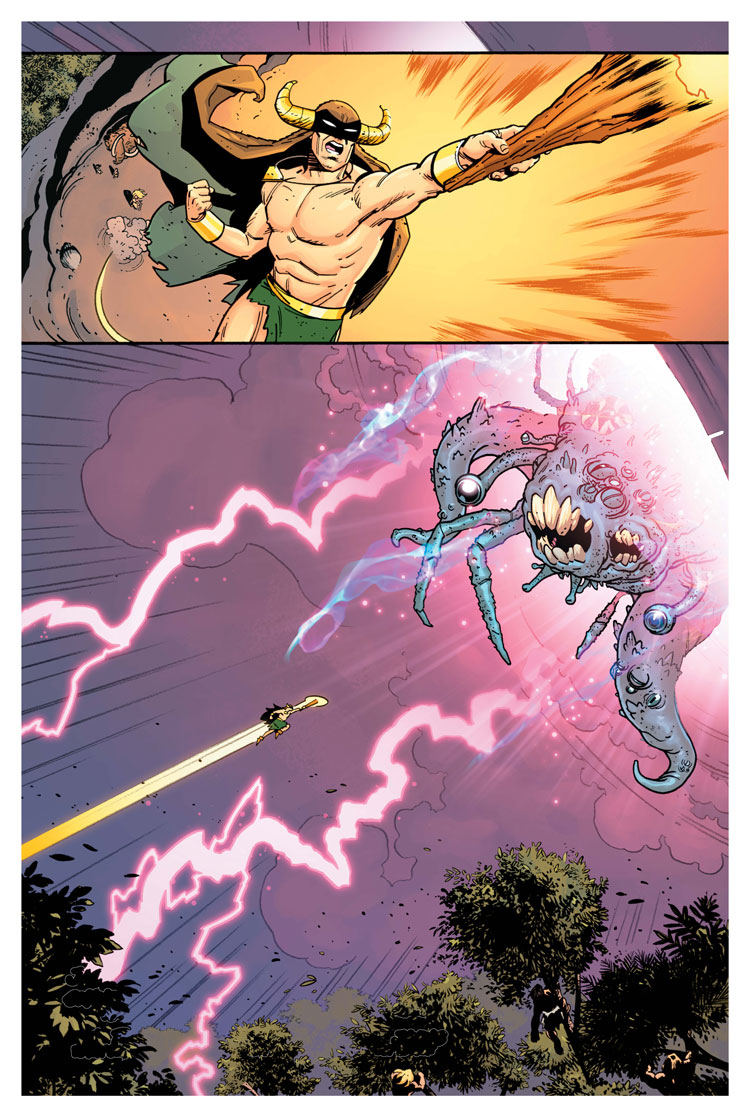 You start to find out in the Frankenstein Jr. story that Zinn was a colleague of Doctor Quest and Linda Kim-Conroy, who builds Frankenstein Jr. They were all apparently friends, who worked together on a big project in the past. And then suddenly, you realize it makes sense. When you get down to a group of the high-impact physicists in the world, they all are going to know each other. All the great minds of any industry or field generally know each other.

It’s kind of fun to see that maybe these guys aren’t all mortal enemies. Maybe life just kind of pitted them against each other, and now they’ve got to figure out what to do in the face of a planet-wide catastrophe coming in.

MSG: You mention Frankenstein Jr. He’s making his first appearance in this issue coming up. What are your thoughts on that character?

JP: You’re going to see some evolution in him, but as we bring in Frankenstein Jr., he’s sort of what he’s been. Buzz Conroy lost his dad in an explosion that happened with this project I just mentioned. A lot of people think Doctor Zinn had something to do with that. Maybe he didn’t?

Buzz is essentially left alone with his mom, who’s the world’s greatest roboticist, and he draws a little crayon version of a friend that he wants. So she builds it for him. That’s why Frankenstein Jr. looks like a kid designed him — at least the first version that you’ll see does. 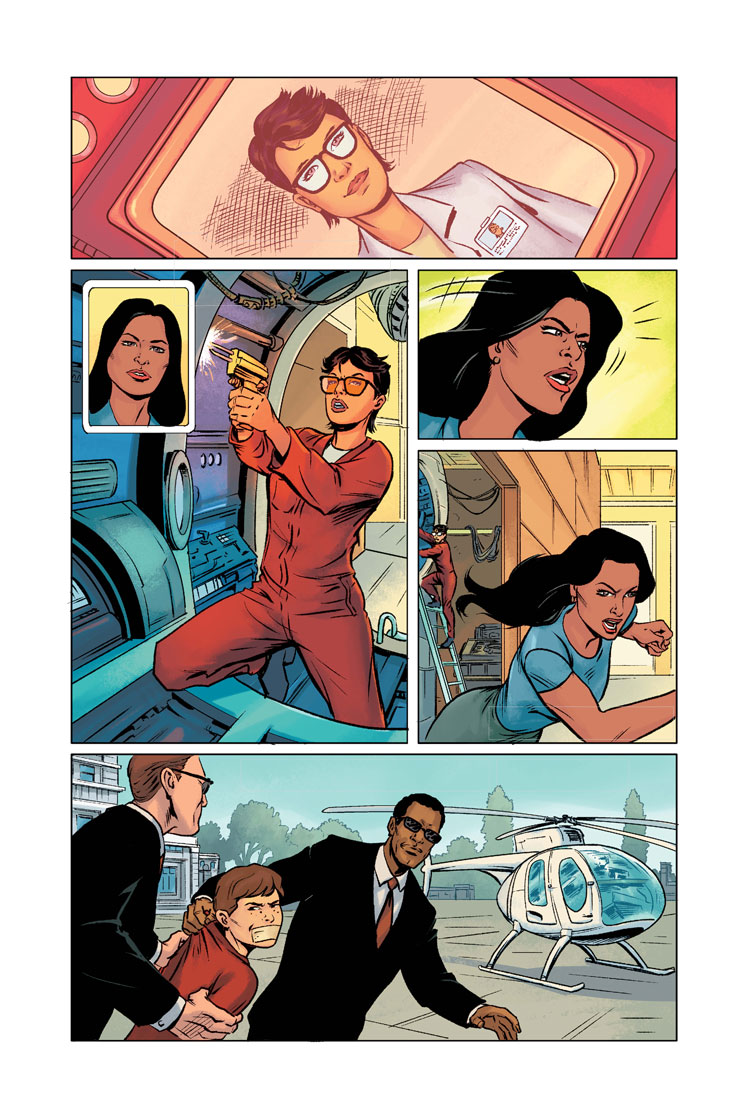 Originally, he’s just supposed to just walk around and babysit Buzz, but he gets much more use out of him soon enough. Like, “Hey! Let’s rescue this kid swept up in the river. And let’s turn over this school bus that’s flipped.” and stuff like that. Buzz is essentially functioning as that robot’s consciousness and imagination.

And in our story, when we meet Buzz, he’s getting kidnapped. Some other competing firm wants to recruit his mom to work for them, but of course the robot is on the job!

MSG: Now, there’s another character who’s taken center stage that you did create for the series: Deva. What motivated her creation for you?

JP: I needed a field agent who brings Birdman together with the Quest team. She represents Birdman’s group Inter-Nation. It’s a case where — once I got to see her in action as Doc drew her and Jordie colored her — she sprung to life much more than I intended. Now she is a major character as the face of Inter-Nation.

She has a hand in bringing all kinds of things together. You’ll see that she’s out specifically looking for the greatest minds and anyone who has special abilities to bring together. She kind of works as our Nick Fury. I hate to say that, because I think she’s pretty neat in her own right. You get to see a little more insight into her later in the issues. 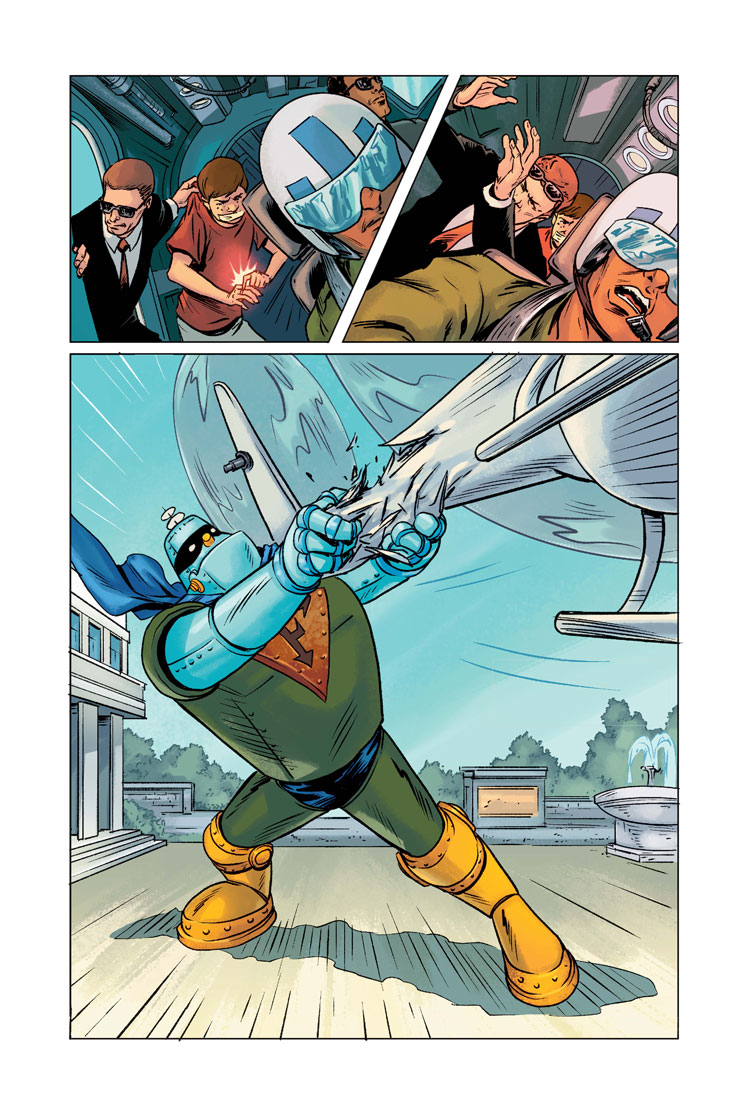 MSG: Anything else fans should be watching out for in the upcoming issue?

JP: The biggest surprise is maybe the latest incarnation of Mightor. That’s a lot of fun once it starts happening. You get more into him both in this and the next issue.

And the Impossibles. In my mind, they were always going to be the hardest ones to make happen. But it turns out, they’re fitting right in. And they fill a good role. Not everyone is going to be a seasoned Race Bannon-type pro at all of this. Somebody’s going to be brand new and not actually know how to do things yet. That’s where they come in. Everybody can’t be the best at everything. I kind of relate to them better!

I also really enjoy — and didn’t expect it — Dino Boy and Ugh. When we were planning things, we had to ask Dan DiDio if it was ok to squeeze Dino Boy in, and he was like, Yeah! It turned out to be a good solid point of the story that they all go to that one point in South America.

When you first see little Todd, he’s got an Allosaurus bearing down on him. It’s actually pretty scary! Aaron [Lopresti] really did a good job getting the menace of it across. Everybody thinks they want to see dinosaurs, but do you really? Not unless you have a big bruiser caveman around to help you out.