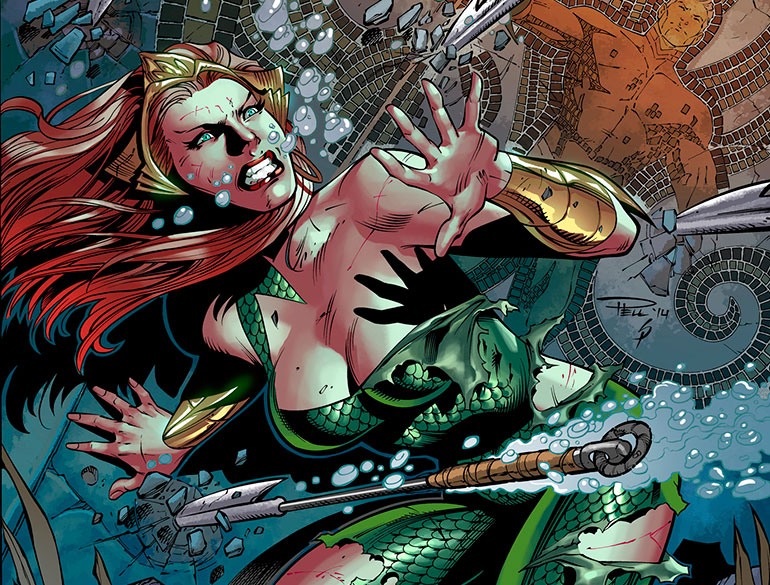 Two of the most surprising successes of DC Comics’ New 52 are also some of the most elemental of characters: Aquaman, King of the Seven Seas, and Swamp Thing, Avatar of the Green. So, it seems like a natural fit to have them come together for a mini-crossover! As part one concluded last week (and part two hits this Wednesday), we sat down with Aquaman writer Jeff Parker to find out what brought these two seemingly disparate heroes together, and where the series is going across the board! 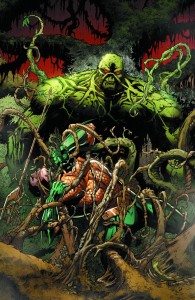 Matt Santori: Jeff, thanks for taking time out for Comicosity! How did the crossover between your book and Charles Soule’s Swamp Thing come about?

Jeff Parker: Aqua-artist Paul Pelletier requested a Swamp Thing appearance, and that book shared editors with us, which made it easy to find a story point that would connect the two characters naturally.

MSG: The balance between the various denizens of the ocean — humanoid, fish, and plant — hasn’t been explored to any great degree in the past. Are Atlanteans naturally more ecological, or will we see human nature bleed through in their relationship with the environment?

JP: They’re not perfect about it, but Atlanteans are generally more thoughtful about using resources because the ocean is a harsh environment.

MSG: In some ways, both Aquaman and Swamp Thing are both seen as creatures of myth to human culture at large. How does this similarity play out for you as you are having them interact?

JP: They both run into the same problems everyone else does concerning them. They’re both figures who aren’t understood to much of the world, and they both have huge responsibilities driving them. 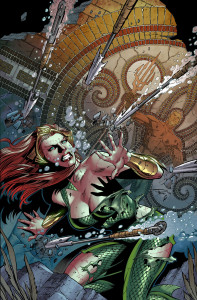 MSG: Ya’Wara was an interesting choice to accompany Arthur in seeking out a foe most closely aligned with nature. What drew you to the character and does her presence have long range implications for Aquaman’s reunion with Mera?

JP: She seemed a perfect choice to go hunting some creature in the swamplands. It’s similar to the jungles she grew up in and she can teleport them around to cover a lot of territory — you need an edge when searching for Swamp Thing.  But she’s not making trouble for Mera. Arthur is nothing if not extremely loyal.

MSG: Mera is off on a mission of her own in this issue, alongside another prominent Atlantean woman, Tula. What is your thought process on the relationship between these two women — is this the beginning of a solid don’t-call-them-Aquawoman/Aquagirl team?

JP: They make a great team. I was really throwing the two characters together to see what would come out of it. I do that a lot and often characters surprise me. They could have had tension as I imagined early on, but instead they clicked. So yes, I want to see more of that too.

MSG: The revelation of other, more arcane areas of known Atlantis mirrors much of what land-based metropolitan areas experience in neighborhoods defined by racial make-up. What kinds of conflicts do you see coming out of this kind of set-up for urban Atlantis?​

JP: The exact same ones we see in our countries and large cities. I want to show that though Atlantis is this fantastic undersea environment, people are fundamentally the same everywhere. They’re no more enlightened or barbaric than us, they are just underwater. Some love Arthur as the king, some blurt ‘Aquaman!’ whenever developments don’t go their way. 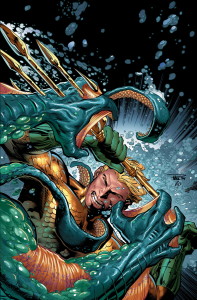 MSG: The art duties on this issue were split between Paul Pelletier and Alvaro Martinez. How has working with each gentleman been, and what are you finding that each bring to the storytelling table?​

JP: I am always delighted with how Paul creates a world, but I really love how he draws Arthur and Mera. I think he imbues them with so much personality and he and Sean Parsons bring this lush finish I can’t get enough of.

When it was clear he was going to need some help on the book for a bit, I was worried until Alvaro turned in his first pages. Alvaro is great! He did a perfect design of The UnderRealm, and he did an excellent job on the Aquaman Secret Origins story, which wasn’t easy. His style fits the book really well — I break it up by scenes to each be done by a sole artist because I think it’s jarring to switch in the middle of a scene, but if their styles were too far apart it would still make it read oddly. Instead they complement well and with Rain Beredo coloring it all, the whole issue is cohesive and reads great.

MSG: Any final thoughts or special teases going into part 2 of the crossover with Swamp Thing?

JP: It’s pretty fun to see Aquaman’s reaction to Swamp Thing coming into his territory and adapting to the sea, you’re going to like it.​​

The story began in Aquaman #31, but continues in Swamp Thing #32, in shops and online tomorrow from DC Comics.