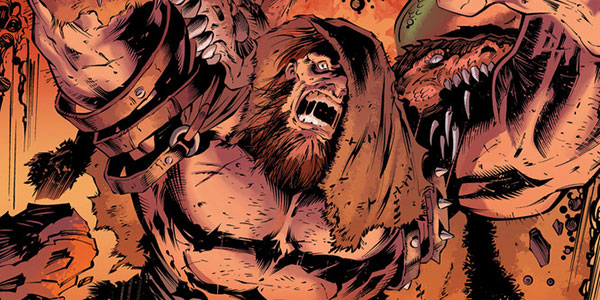 The world of Atlantis is a mysterious one in the DC Universe, but its mysteries have just gotten a little bit bigger with the reappearance of the son of Zeus himself, Hercules! Reintroducing the classic figure in the pages of Aquaman is series writer Jeff Parker, who took some time out to chat with Comicosity about the demigod’s return, how heavy lays the crown on Arthur Curry’s head, and just what we have to look forward to in his upcoming crossover with Swamp Thing! 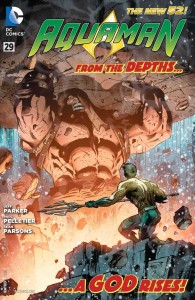 Matt Santori: Jeff, thanks so much for talking with Comicosity again! Now that you’ve settled in to writing Arthur and Mera a bit, how have you been finding it?

Jeff Parker: It’s always a great time to jump into that world with each script.

MSG: Aquaman definitely seems torn between the surface world and Atlantis more than ever before now that he’s resumed the throne. Is it obligation driving him solely, or do you feel he has a genuine desire to rule his home world?

JP: I think he wishes there were someone else who could do the job, but there isn’t. He wasn’t raised in Atlantis and in all the doctrine one would normally live through to become royalty. He was raised by a lighthouse keeper who spent his days trying to keep people safe and rescue those in danger — so that’s what comes naturally to Aquaman. But now that the world knows about Atlantis, and many are fearful of this mysterious country underwater that could attack at anytime, the best way to keep stability is for him, the public hero, to be the king. 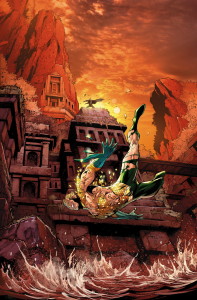 MSG: Mera’s presence at Arthur’s side is constant — which is always great to see — but the distrust the Atlantis council has for her seems headed for a confrontation. Is Mera ultimately determined to be Queen or will her choices take her down a different path?

JP: Like I’m going to spoil that! You’ll see much more of Mera’s intrigues with the Atlanteans in the next few issues. Something happens!

MSG: The focus on science in a world traditionally known for its mysticism is an interesting take, and as highly politicized under the sea as over. What went into your thinking on developing Triton and focusing on the Atlantian science officers?

JP: Whenever a country hits the radar as being a threat, the US and partner countries start establishing a presence nearby, and I thought this is what would likely happen after the Atlantean conflict. Everyone tends to accept as a given that the ocean itself is Atlantis’ and therefore Arthur’s realm, but I think the world powers would challenge that immediately.

And while Atlantis uses a lot of ancient engineering that seems more mystical, they would had to have been progressing with science so I wanted that to show up some more.

MSG: On the other side of the coin is, of course, the reappearance of several ancient mythological beings, including a DC biggie: Hercules! What was your inspiration for the character — Bronze Age Hercules Unbound, Wonder Woman antagonist, all of the above? 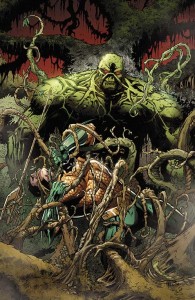 JP: All, and none — I want him to be a rogue figure. His banishment in the nightmarish realm that Atlanteans threw all their enemies into has taken a huge toll on his mind. So there’s glimpses of the great hero, but when you live among monsters for centuries, you probably become one.

MSG: Aquaman is firmly rooted in the DC Universe over in Justice League, but seeing some of these other ties is good for the character in a way. Will Hercules be sticking around the cast, and can we see more ties with other aspects of the ancient (or scientific!) DC Universe to come?

JP: We have more characters on the way in, and Wonder Woman is definitely one of them. And that probably suggests that we’ll be exploring more ancient history and bringing it back.

MSG: The upcoming months also has you crossing over with Charles Soule’s Swamp Thing and the Dark corner of the New 52. What motivated that connection and how do you think Aquaman fits into that genre of super-hero comics?

JP: The initial motivator is Paul Pelletier — he really wanted to draw the Swamp Thing, so we made it happen! So the editors got Charles and me talking until we found a natural intersection for Alec Holland and Aquaman to collide. Aquaman connects to that world surprisingly well, as he and Swamp Thing kind of fill similar roles as avatars.

JP: I think that poor scuba diver who was attacked by sharks is going to be okay! But Aquaman isn’t.

Jeff Parker is the monthly writer on such DC Comics titles as Aquaman and Batman ’66, as well as Dynamite Entertainment’s King Watch series, starring The Phantom, Flash Gordon, and Mandrake the Magician.