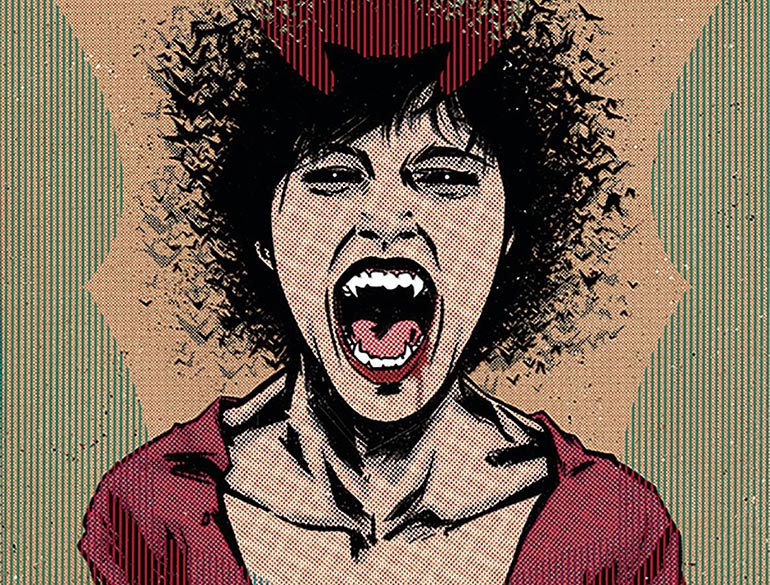 Vampirella has had a long history, with a lot of creators taking her on some very different turns. But few of these have been as difficult to predict as the alien vampire mistress’ newest writer: Jeremy Whitley. Having made a name for himself on creator-owned all-ages books like Princeless and new heroes for the Marvel Universe like the Unstoppable Wasp, the writer taking up the #1 lady in horror comics is anything but predictable.

Whitley shares some of his insight into the move with Comicosity, as well as a bit about what fans can expect from this foray into the darker side of Dynamite Entertainment’s catalog alongside new series artist Andy Belanger. 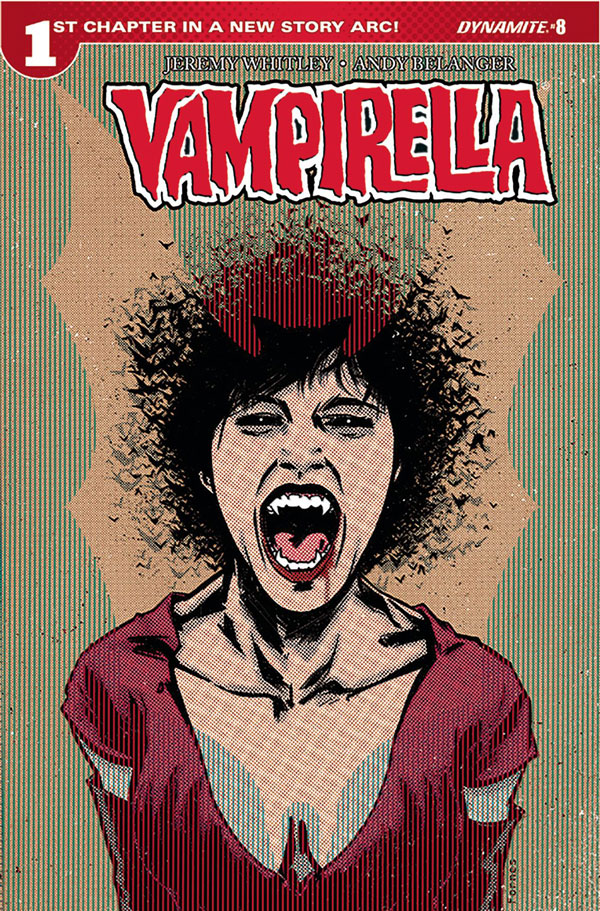 Matt Santori: I’m just going to go on the record and say that I’m one of those people who keeps coming back to Vampirella every time there’s a new jumping on point, and most of the time, it doesn’t hit home for me. And I really want it to.

So, tell me, Jeremy: how are YOU going to convince me to love Vampirella?

Jeremy Whitley: In my case, I’m one of those people who hadn’t read a lot of Vampirella. I knew Vampirella existed. I knew a little bit about her, and when Dynamite approached me about writing the book, I was a little on the fence about it. I didn’t know how I felt about it and where I’d want to go.

I basically said, I’m really interested, but let me think about what I’d want to do. My experience with Vampirella is “vampire in a skimpy red bathing suit.” So, I got into the research and looked into her past and stumbled over the fact that Trina Robbins co-created Vampirella. Which was like, wow. If Trina co-created her, there’s got to be something really good there. 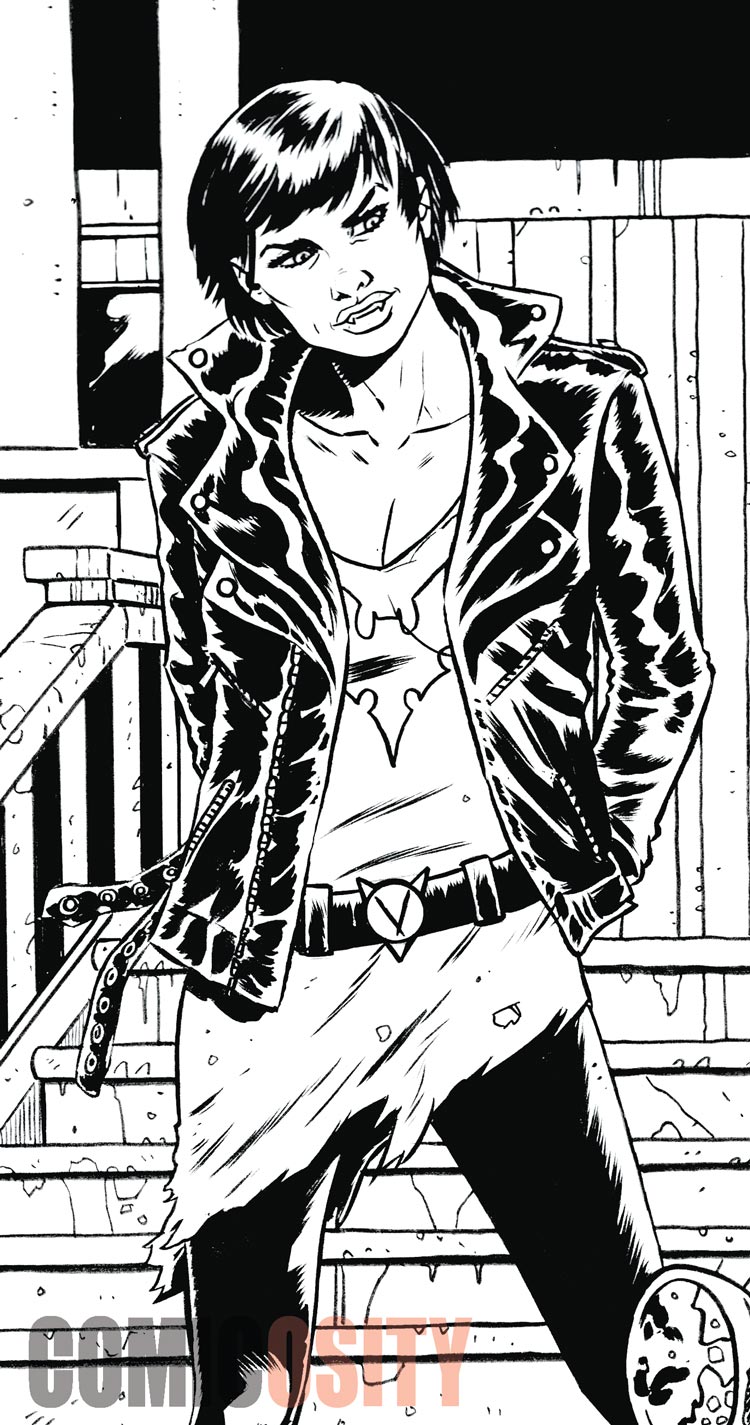 I want to do a Vampirella that’s equal parts horror and action, that doesn’t just rely on the sexy vampire side of things. Paul Cornell [the series’ previous writer] has already set up that she’s living in this post-apocalyptic future. It’s sort of like a Blade Runner feel to me. What Andy Belanger and I are doing is a little more Mad Max. We’re going to be going pretty full tilt on the action and excitement.

My biggest focus is giving Vampirella a fun and unique voice, so she’s a character you can really root for in the series.

MS: You are continuing the story from Paul’s run then. It’s not a reboot or reset.

JW: No, Paul pretty effectively blows up his plot at the end of his run, so he gives us a pretty fresh place to start from. He destroyed everything that he had been working with, but left this unusual futuristic setting. It’s a nice compromise that it’s a continuation, but still a pretty fresh start from where things were before. 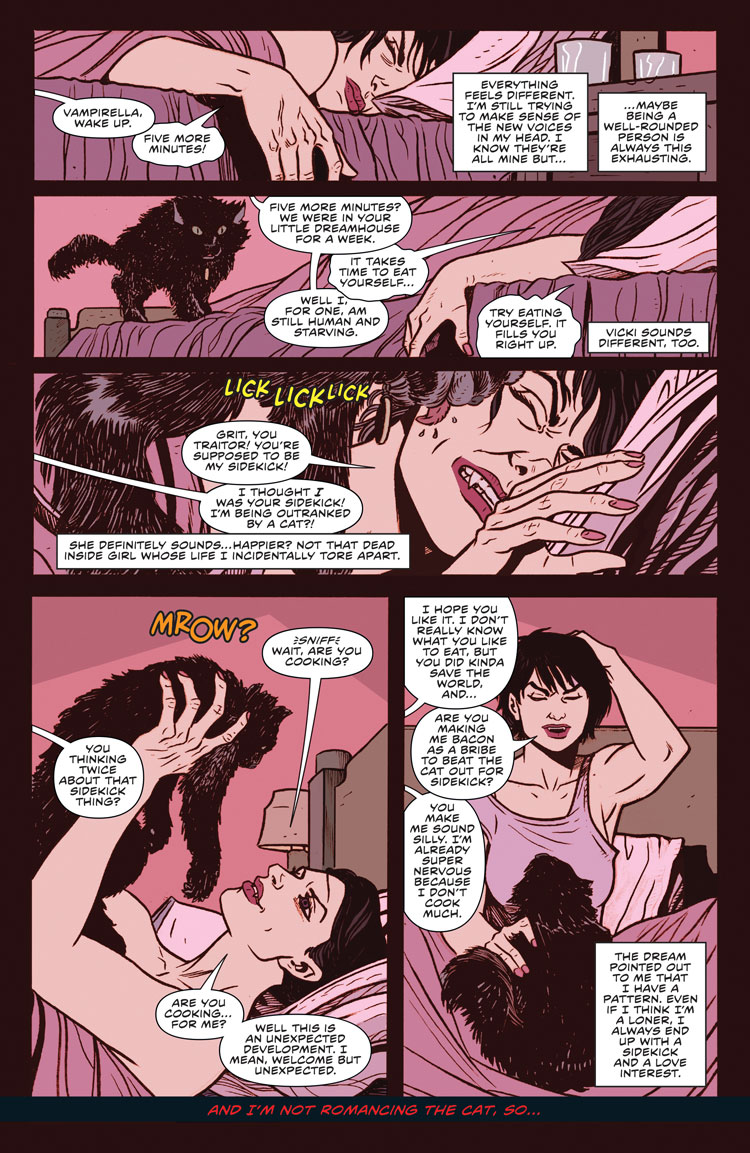 MS: One of the things about Vampirella that always strikes me — and it’s handled well to varying degrees depending on the creative team — is this idea of being sexual without being objectified. A sexuality with full agency. What’s your vision for that idea of her owning her sexuality?

JW: I think sometimes, especially for people in comics, it seems like a difficult distinction to make. I think a lot of it depends not just on the writer, but on the artist. Because a lot of the difference between having a character that owns their sexuality and has agency, and having one that is objectified, is the way they are physically depicted on the page.

That’s one of the things I talked with Andy about, is getting that right. When we do deal with sexiness or sexuality with Vampirella, it’s making it about what she’s doing, not how we’re framing it. I think that goes a long way.

I also think that our situation is unique, because we’re working with one particular relationship for Vampirella in the book. She’s going to have her own steady girlfriend in the book, so she won’t be set up to seduce every other person that pops up on the page. 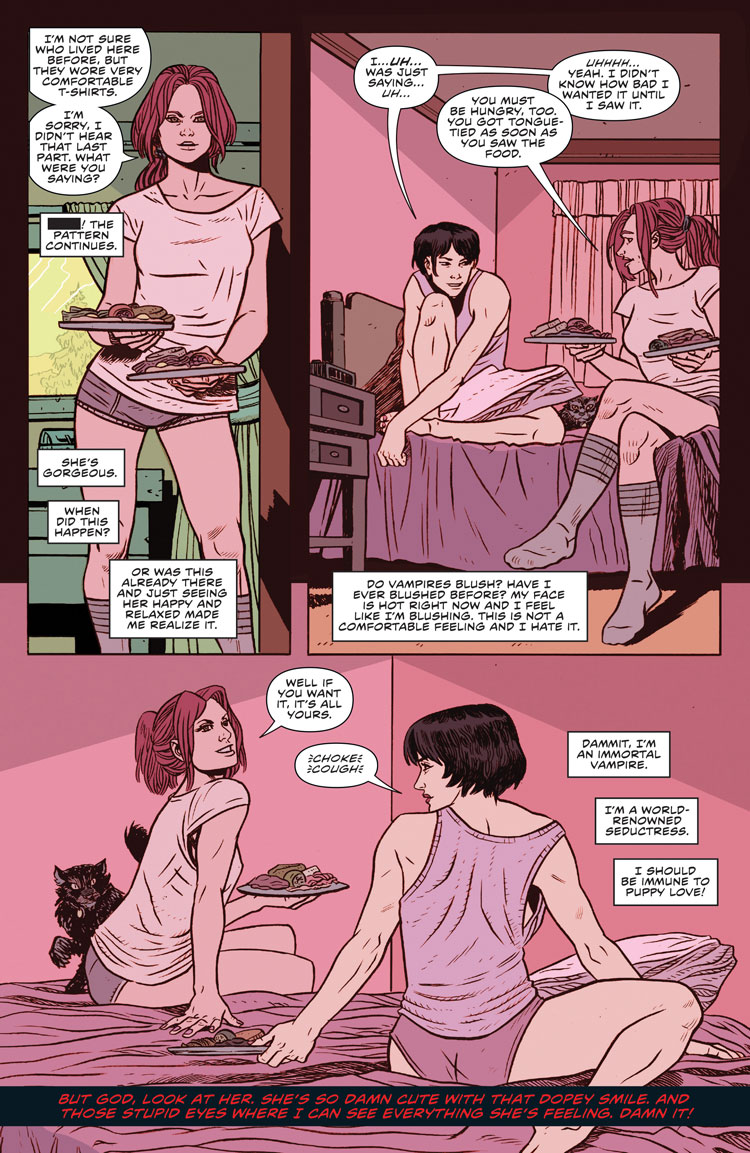 JW: It’s someone we’re picking up from Paul’s run. The character’s name is Vicki. She acts sort of like the sidekick character to date, and looking at what Paul was doing, I picked up some subtle — and maybe not so subtle — stuff he was doing with her. One of the standard set-ups for a Vampirella story is Vampirella + a sidekick + a love interest.

In this case, it’s one character who develops from being a sidekick pulled into the undertow of Vampirella’s crazy world and gets her life ruined, but ends up sticking with her. Vicki comes out the other side as a relationship that’s really dependable, and develops pretty gradually through the entire series. 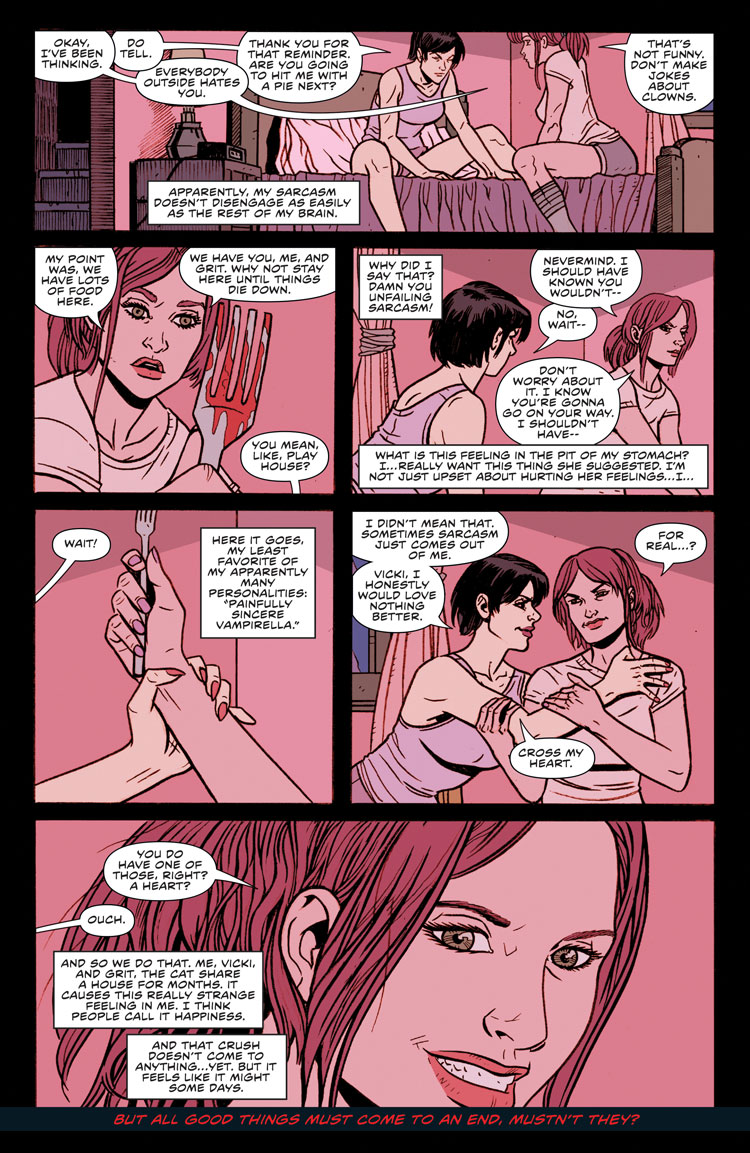 MS: You mentioned that the story is a little more action-oriented. What kind of threats will Vampirella be facing starting in your first issue?

JW: With this story, we’re reintroducing an old threat in a new way — a classic Vampirella character that shows up as the orchestrator of all of these things that are happening to her in my first few issues. She has to face everything from a surprise attack in the first issue, to some thugs that are sent after her, to dealing with a cult that is out to kill Vampirella for some of the things that happen at the end of Paul’s run in issue #7.

She’s in bad favor with a lot of people, and there’s one particular person from her past that will be the big bad of this story. 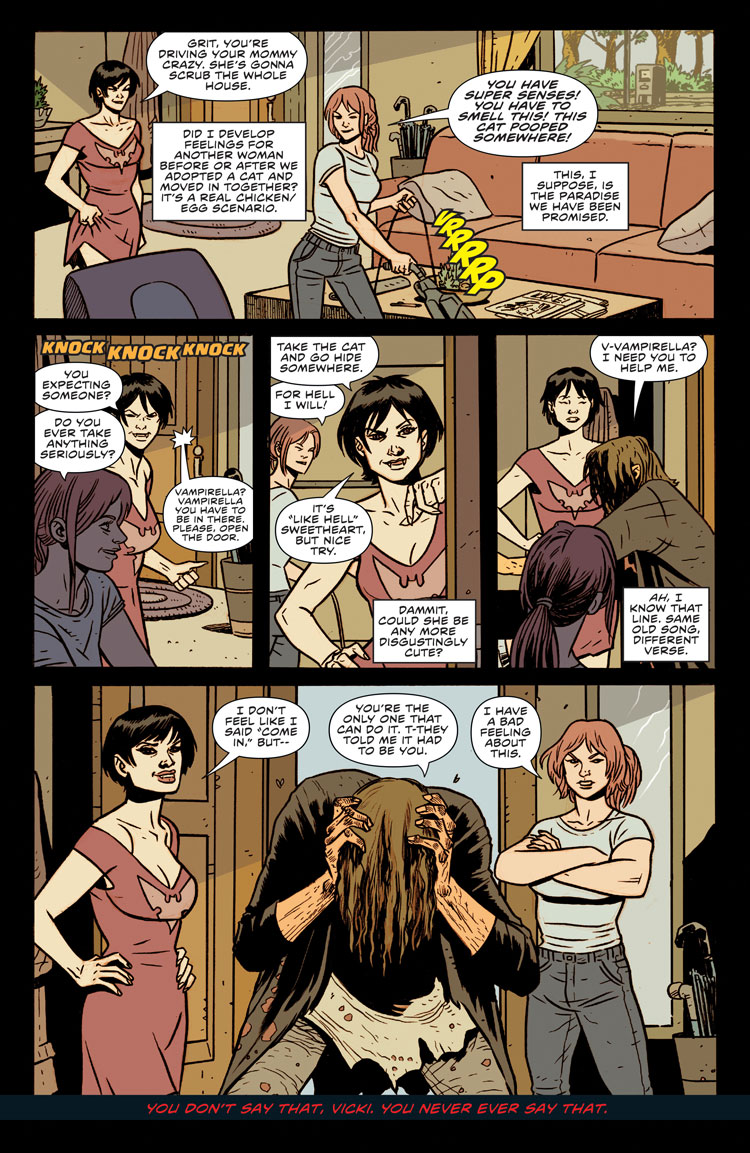 MS: The only other thing I want to ask — and maybe this is a dumb question — but more than a few heads turned when you were announced on the book. Especially given the more adult horror history of the character. It’s not really what you’re known for, having done a lot more all-ages content.

How are you tackling this book differently, or approaching it in your head as a writer?

JW: It’s funny, because in the first issue of Princeless, I give Adrienne a sword, but she can’t really ever use it! [laughs] She has this sword, but she can’t stab anybody because of the sort of book that is and the type of character she is. There have been a lot of times we’ve had to figure out “What’s a clever way to end this fight?” What would theoretically be the obvious way has to be steered into another direction.

It’s nice in Vampirella to not have to do that. To go all out and do the crazy stuff that I also like to do. I love what I’ve been doing with Princeless and Raven: The Pirate Princess and Unstoppable Wasp — and My Little Pony for that matter. But there have been plenty of stories that I’ve written that just haven’t quite made it to print that are on the adult side. That are more mature or more violent. Just for whatever reason, those are not the ones that made it all the way or caught on yet. 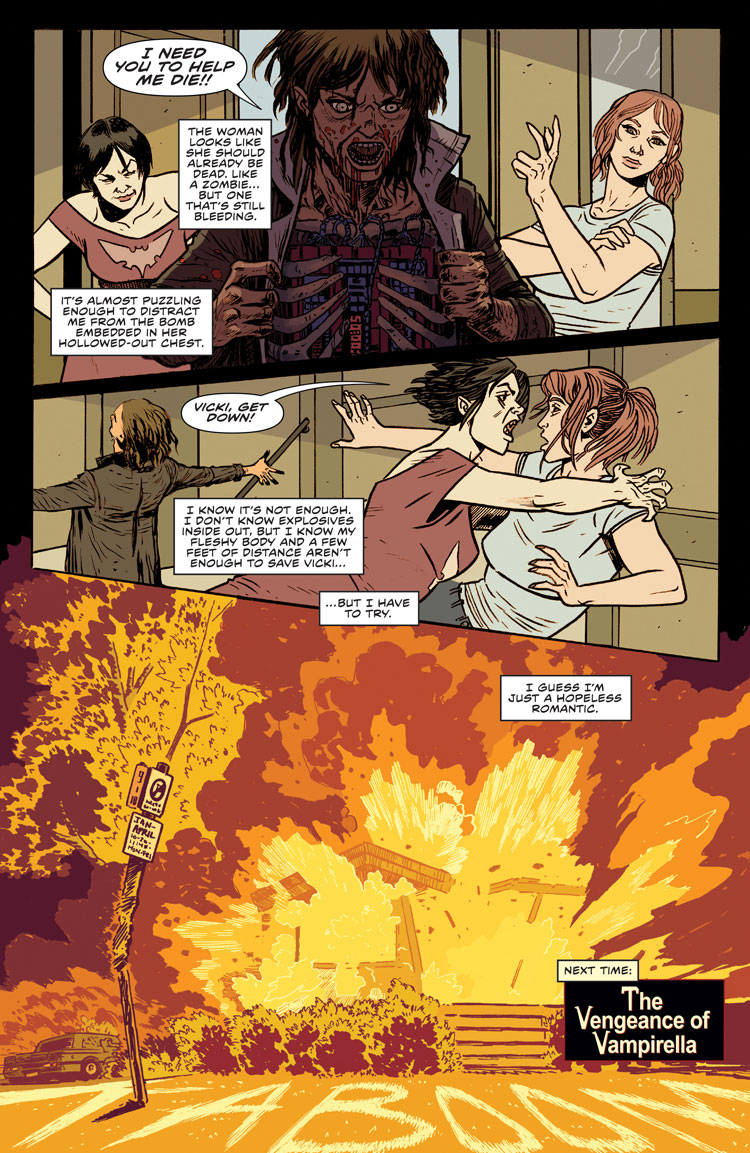 I kind of raised my eyebrows too when Matt Idelson, the editor at Dynamite, was suggesting this to me. My first thought was, are we cool with doing something different with the book? Are you looking to do something different with the book? Because the images that pop in my head about Vampirella are all risque cover type of stuff that was done in the past.

But I think the reason they brought her to me is that they are looking to do something a little bit different. And it’s really fun to write. Vampirella is sarcastic, and smarter than most, and above it all a lot of the time. It’s a nice change of pace from having written Nadia Van Dyne for eight issues, who is never sarcastic, always earnest, and just so nice.

Vampirella is not that.

As much as I love Nadia, writing someone who is a little more like myself is fun, too.

JW: Yep! From a G-rated Betty to an R-rated Veronica!