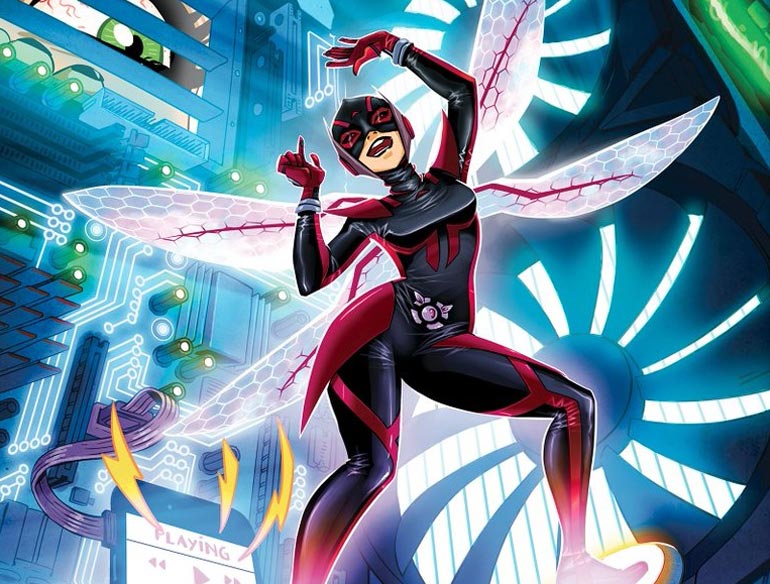 Marvel Legacy may be around the corner, but no character inspires legacy in both the Marvel and real universe as much as Nadia Pym, the Unstoppable Wasp! Daughter of Silver Age super-scientist Hank Pym, Wasp was created not just to be part of Giant Man’s legacy, but to inspire a legacy of women in science all on her own.

Steering that effort is writer Jeremy Whitley, who, alongside artist Elsa Charretier, just wrapped up a series and is launching the first trade collection of the all-new, all-different Wasp’s adventures. Whitley sat down with Comicosity to bring readers who may not have read Nadia’s book yet up to speed and ready for tomorrow’s volume 1 release. 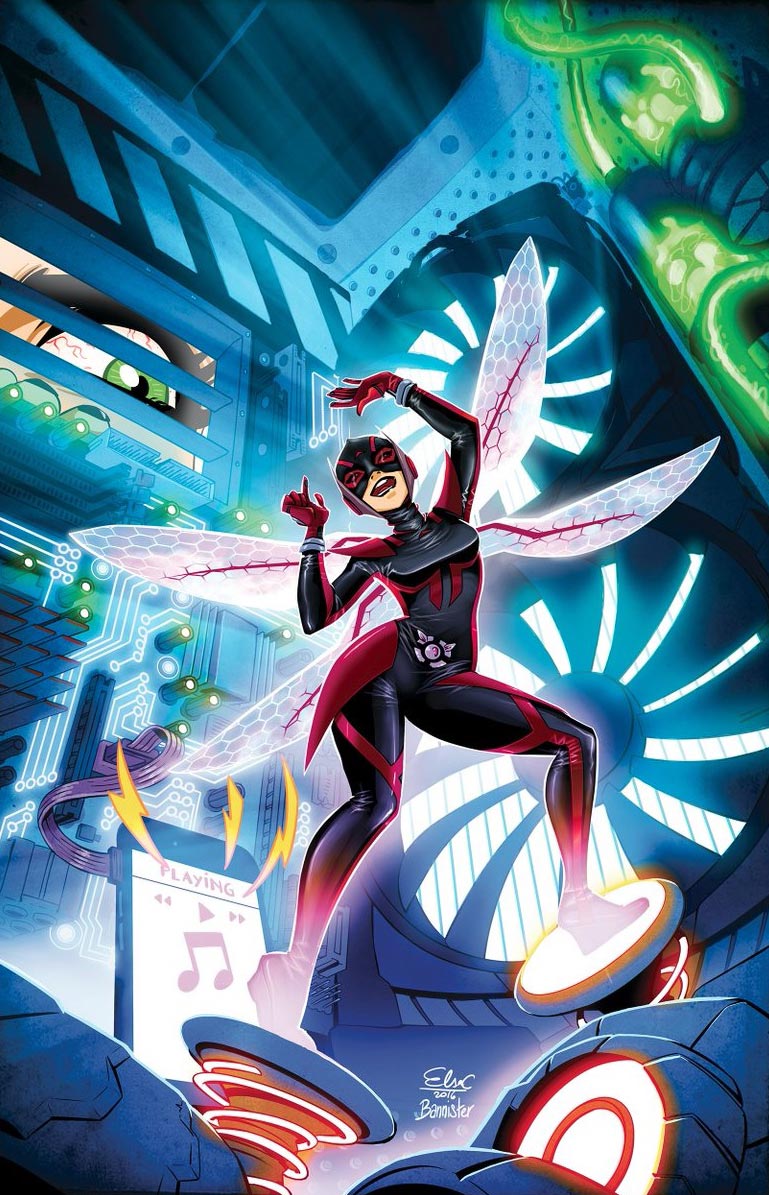 Matt Santori: For monthly readers, the series just wrapped up with a very emotional issue, but for fans who haven’t had a chance to jump on board yet, tell me who the Unstoppable Wasp is to you and what fans can expect as they open the pages of Volume 1.

Jeremy Whitley: The brand new Wasp, Nadia Pym, was introduced in All-New All-Different Avengers late last year. Mark Waid brought her in and introduced her in that book, and I actually got to co-write that issue with him! It ended up launching directly into what we were doing with Unstoppable Wasp.

Nadia is this bright spot in the Marvel Universe. She is glowingly optimistic and extremely intelligent. She is in theory everything that she shouldn’t be, because she is this lost daughter of Hank Pym, who grew up and was raised in the Red Room to be the next Black Widow. To be an assassin. To kill people.

When they eventually discovered how intelligent she was and that she had inherited Hank’s gift for science, she was raised to be an evil super-scientist. But she ended up rescuing herself by replicating Hank’s research on Pym particles and shrinking yourself down.

I love that she’s this character with a dark origin that could be Black Widow or could be angry and violent. But she’s not. She’s chosen specifically to not be that person. She goes out of her way to bring hope and inspiration to others. 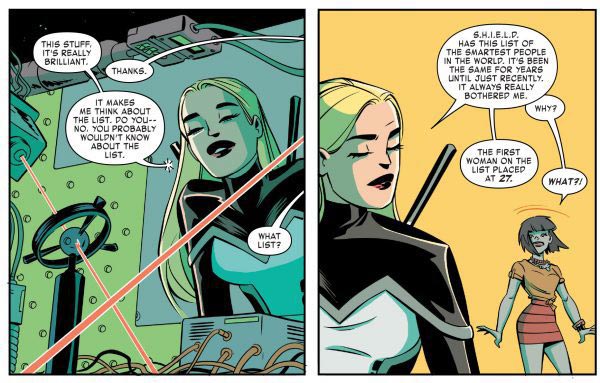 MS: Particularly to other young girls. One of the things you develop early in this first volume is exactly that: the organization called G.I.R.L. Why was the concept of inspiring this STEM environment important to you?

JW: Largely because, in trying to pitch this story and thinking about what was unique about the Nadia, the question about having female scientists came up. It’s part of what makes her unique. There are plenty of female assassins in the Marvel Universe. There are plenty of people with dark paths.

Just recently is the only time we’ve seen much in the way of female super-scientists. There’s Nadia, Lunella Lafeyette, Riri Williams, and to a lesser extent, Ms. Marvel. We see these characters who aren’t just super-heroes, but are also super-scientists.

There haven’t been too many of those, because in the time that super-science was popular, I feel like there weren’t women created for those roles. It’s the same guys we have now. Reed Richards, Tony Stark, Hank Pym, Bruce Banner, and T’Challa.  They’re all guys. 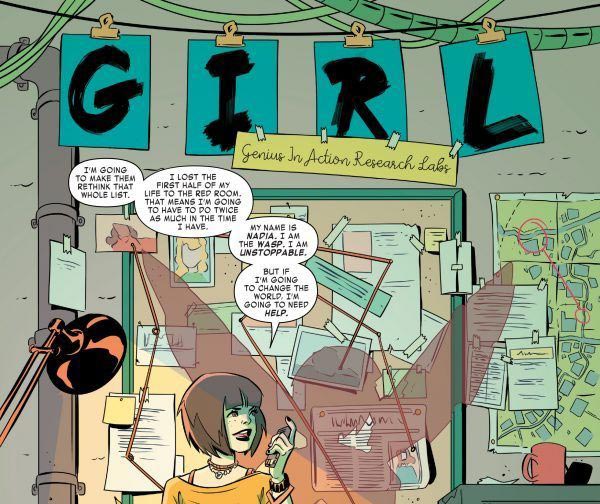 MS: Right. Sue Storm definitely didn’t get the same treatment in the 60s that the guys got.

JW: For sure. To some extent, recent authors have done their best to retcon that and make Janet Van Dyne [the original Wasp] and Sue less vapid than they come across in the 1960s. But having this character who is already aware that she is a super genius and doesn’t have anything to prove — which is exactly what Moon Girl is about. She is what she is. Nadia also doesn’t have to prove that. She already has. Everybody knows what she’s capable of.

So, Nadia reaches out to Mockingbird in the first issue. They have this conversation where Mockingbird says, “You know, we have to get out there and look for our own people.” Because there’s this system where people are looking to mentor who they see as the next version of themselves. It’s a real thing in real life. There’s this inherent bias at work, but now there’s this idea of a young girl reaching out and finding other young girls to become the next generation of female super-scientists.

That’s what G.I.R.L. is all about: Nadia finding these characters that nobody else has looked for, because they’re not the sort of scientist Tony Stark or Reed Richards would be looking for. 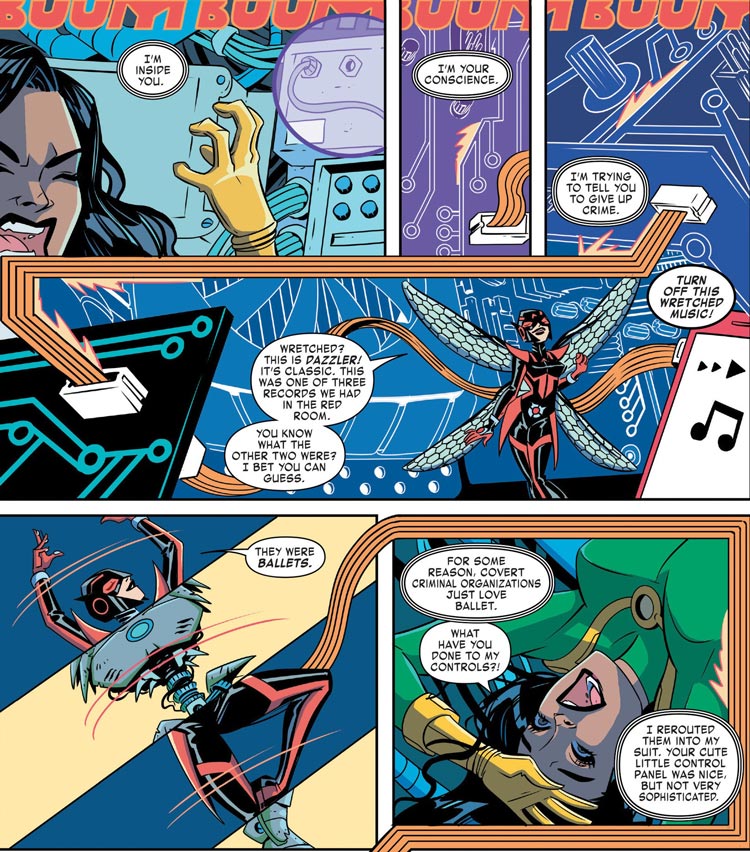 MS: You’ve been working with Elsa Charretier on the book from the beginning. What do you think she brings to Nadia in particular for the title?

JW: Elsa is amazing to work with. She’s been fantastic all the way through.

To Nadia, she brings this excitement and youth and fashion that could be the missing element in something like this. You can say all day long that a character is 16 years old and fashionable and all that, but if you have certain traditional comic book art on it, all the women could look mid-20s and have the same spandex outfits.

Having Elsa drawing the character gives her so much more personality than she could have had in an average book.

And I think beyond that, Elsa brings so much beyond the action and how the characters look and feel on the page, but also in ideas. We have a recurring theme in the issues: Nadia’s neat science facts, where she talks about things that she knows about science that relate to what’s going on, and help her figure out what to do.

JW: Yeah!! That wasn’t in my original script for issue #1, but when Elsa drew this giant robot in that issue, she did these cutaways of the inside of the robot. So, what if these cutaways are what it’s like to see through Nadia’s eyes and know what the science is behind it.

We went through what turned out to be hours of research into robotics to get this stuff right. It gives it that feeling of Nadia being smarter than me. And that’s one of the hardest things to write, I think. Characters who are smarter than you.

That feeling we developed in the process of working on the book together lends some authenticity to that. 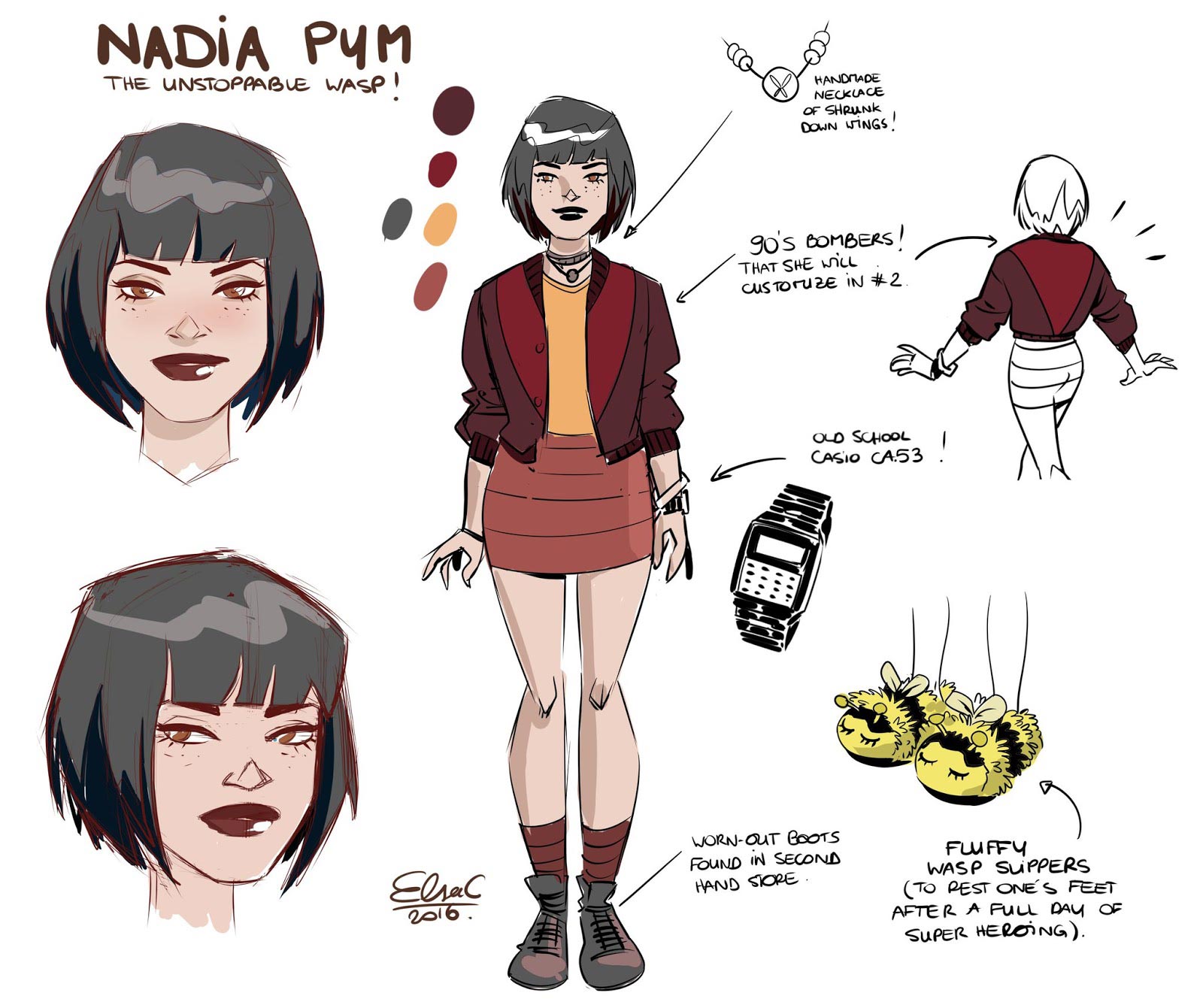 MS: You make a really good point back there about how teenage girls rarely appear in comics like teenage girls. The artists you work with in all your books — Princeless, Raven the Pirate Princess, Unstoppable Wasp — they’re all really good at drawing girls to be age-accurate and not overly sexualized.

JW: That’s an important thing to me, especially with Princeless. It’s not about her being sexualized, infantilized, or a prize. So that’s always been a thing on my radar.

Some amount of that is just the skill of the artists, but it doesn’t hurt that all the artists you’re talking about are women, and have a sense of fashion and sexualization. They can see “Oh, if I draw it from this angle, it will be titillating, but it’s also sexualizing a teenage girl.”

And with things like fashion, it can make characters distinctive in a way that they wouldn’t normally be if you didn’t have someone who understands that element of style. It also allows characters to be attractive without it necessarily being a sexual thing.

MS: So, in addition to the science facts, you also had something really special in the back matter of the single issues that’s carrying over to the trade collection.

JW: In every issue, instead of having a usual letters page, we decided to do interviews with actual women scientists out in the world, doing real science. I thought that it added a needed bridge between the characters in the book doing cool, fun, but ultimately impossible super-science and making it an actual real world thing. Relating it for girls reading the book who want to do real science. 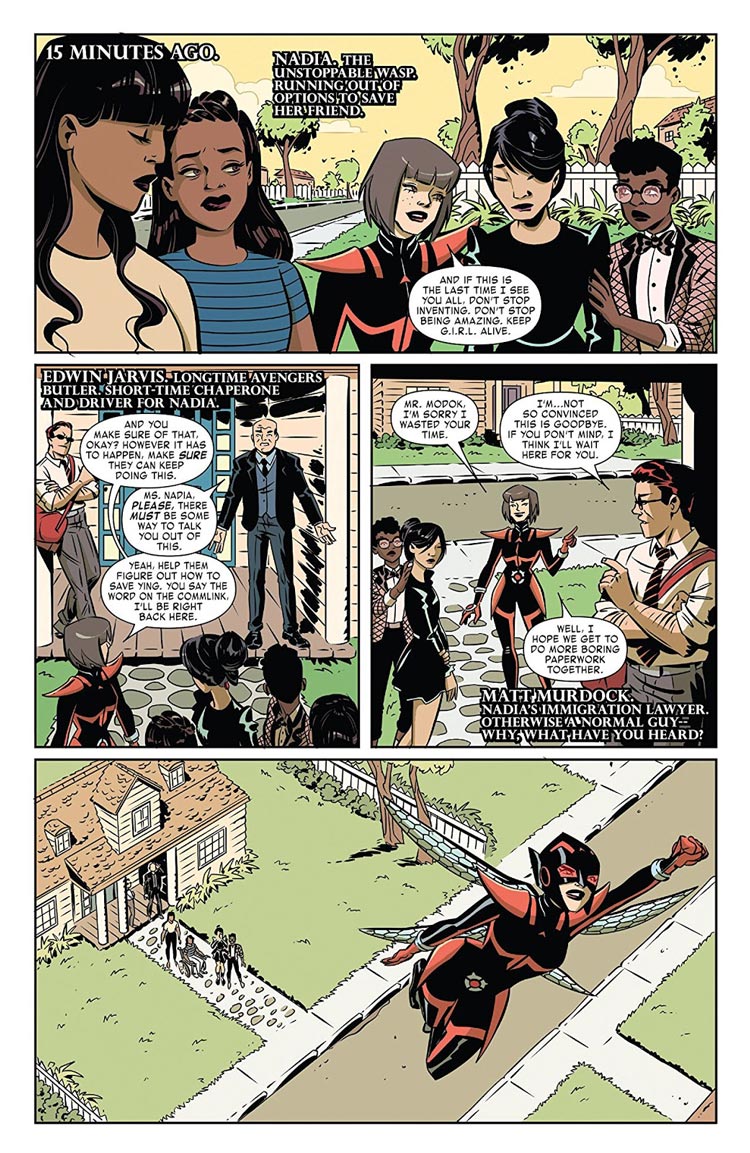 Having women who are actual out there doing it, and have interesting and important things to say, was important to me. So, yes, that will make it over to the trade collection. Between myself and Alanna Smith, my editor, we saw to it.

It gave us an opportunity not just to talk to women we’re friends with who are comics fans, scientists, and engineers, but also people who are out there doing things in science that I don’t even have a base level understanding of.

So the trade includes that, the first four issues of Unstoppable Wasp, but also the issue of All-New All-Different Avengers that I co-wrote with Mark Waid. It is a Janet/Nadia issue that focuses on the relationship between the two of them, but also insight into who Nadia is — comics continuity-wise and from a psychological perspective.

You get to see a little bit of Hank in her, and see her try to help the world with science ideas. A very Hank Pym thing to do.