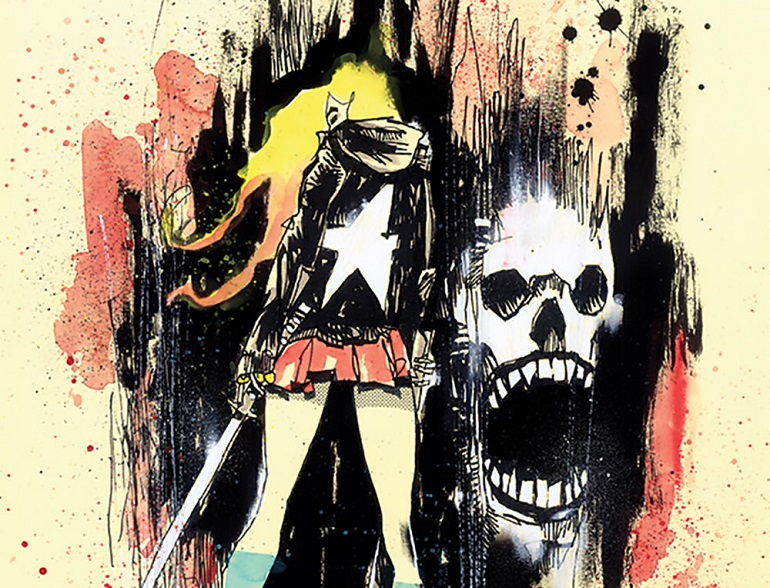 After over a decade since the last volume, Grrl Scouts: Magic Socks is back on the scene! I talked to Jim Mahfood about this exciting new chapter in the Grrl Scouts series. 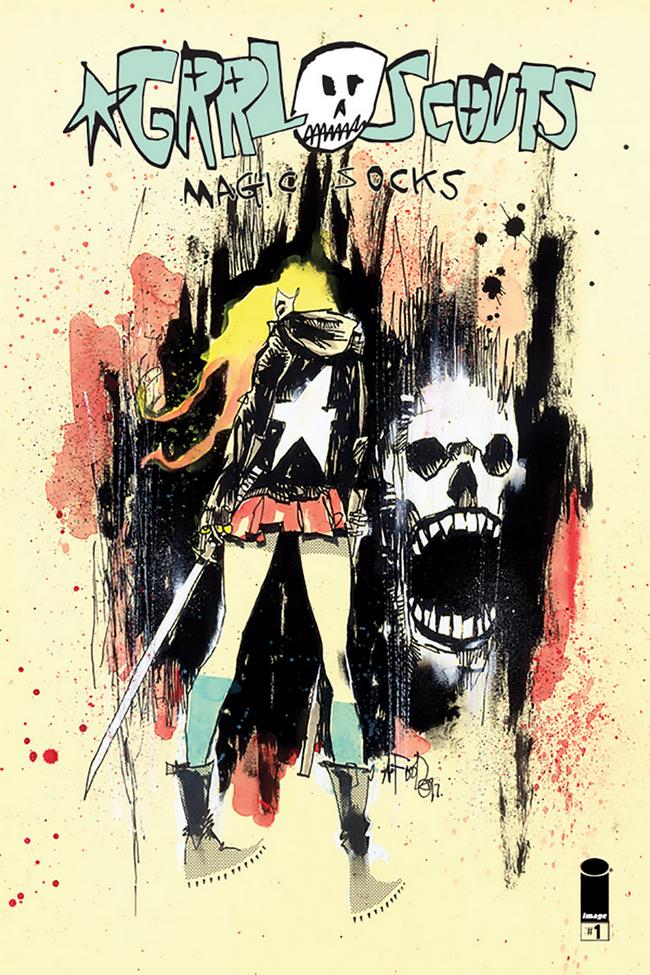 Mexi Gremillion: Jim, there’s been a bit of a gap between your last Grrl Scouts volume. It’s been about a little over a decade since you’ve written about these girls. What brought you back to Grrl Scouts? Why write another series about Rita, Daphne, and Gwen?

Jim Mahfood: Well, I always had this burning desire to do another Grrl Scouts comic book series. It’s what my fans most frequently ask me about, and it’s always been in the back of my head. 2015 was the 20th Anniversary of me self-publishing the first Grrl Scouts comic book and I got excited about the property again. That same year I teamed up with director Mike Diva and made the Grrl Scouts live action pilot for Ron Howard’s New Form Digital production company. People can check it out on YouTube. It’s insane. So yeah, I started writing the new Magic Socks comic series that year and then sat down and started drawing the whole thing in early 2016. It’s been a blast; definitely the most fun I’ve had working on any of my creator-owned comics. And Image gives me complete freedom to go nuts and have fun.

MG: The world you have created is captivating. Freak City is filled with a variety of colorful characters and the absurd situations you place them in in this first issue are pretty crazy. Should readers expect the insanity to be amped up even more? What’s been your favorite scene to write in Grrl Scouts: Magic Socks?

JM: Yes, the insanity and absurdity only increase with each issue. That was sort of the whole point of doing this new series for me. I wanted to make it totally over the top and fun, and really go buck wild with the visuals. My art style has changed a lot over the years and my current style allows me to get way more psychedelic and kinetic.

Favorite scene…let’s see…without spoiling too much, there’s some crazy flashback stuff in the second issue with Nixon and Genghis Khan and the Old West and cowboys and stuff like that. Things that people wouldn’t expect to see in a Grrl Scouts comic, haha. And then when we hit issues four and five half the book becomes my mixed media painted style, and that was really liberating and fun as hell to do.

MG:I like Daphne as a character. She’s not that sympathetic, per say, but she seems to always have the perfect one-liner for any given situation and I love how bananas crazy she is. Who’s your favorite Grrl Scout out of the three and why?

JM: Daphne does seem to be people’s favorite. This new series, Magic Socks, is definitely a Daphne story. I didn’t plan it that way, but it just sort of evolved into that. Her character has no walls or boundaries, she can just do and say whatever the hell she wants, and I think people find that refreshing and funny.

I personally don’t have a favorite character out of the three. They’re all like old friends to me, and that’s how I relate to them. I tried to make each of them unique enough both visually and with their personalities so I would never get bored writing and drawing any of them. 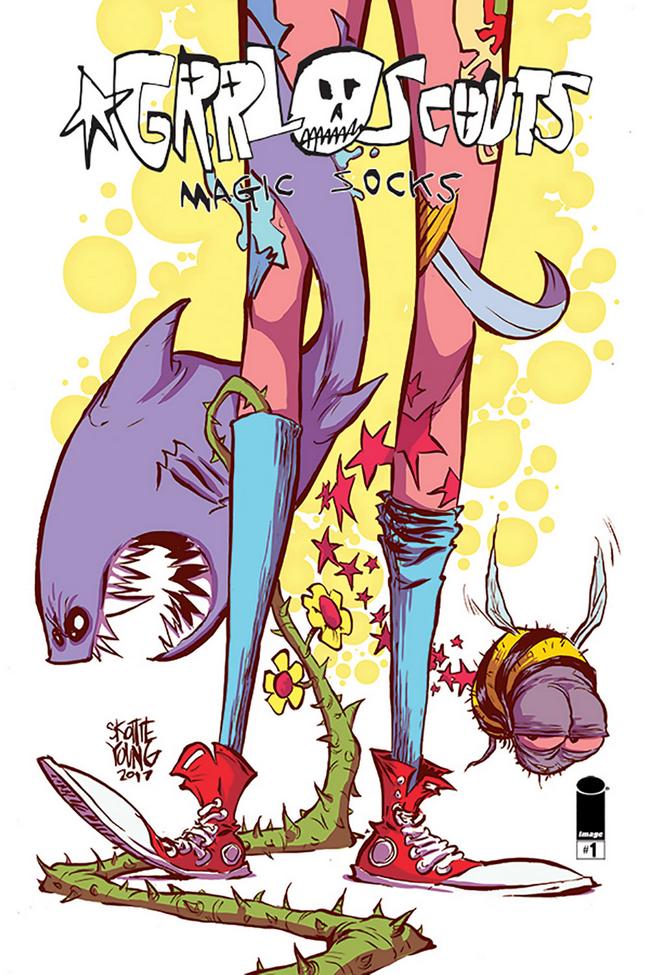 MG: I love your artwork. There’s something hypnotizing about the chaotic anarchy in your art that compliments the hyper-reality you have written. What has been your favorite scene to draw in this comic?

JM: Thank you for saying that. Yeah, I don’t have any favorite scene, per se. The whole thing has been an awesome endeavor to draw, from doing the covers in my painted mixed media style to coordinating the variant covers from incredible artists like Skottie Young and Bill Sienkiewicz. The last issue of the series is a completely ridiculous, over the top finale. I’ve tried to take the action and make it as hyper-kinetically charged as possible. It’s something that I wasn’t really able to do before in my old style of drawing. If you compare this new series to the original book from 1995, the Oni Press series of ’98, and the 2003 Image series, Work Sucks, it’s like night and day. This is also the first time the comic book has ever been in full-color and I gotta give props to my homeboy Justin Stewart for his amazing work on the interior art. Oh, and while I’m thanking people, I also have to give it up to Carmen Acosta for her amazing design skills on the series. There would be no book without these two crazy kids.

MG: I read the “What’s This Whole Grrl Scouts Situation About, Anyway?” page at the end of the issue. It’s really cool that you explained a bit about the evolution of how you brought your comic to life. It’s inspiring. Do you have any advise for aspiring comic book writers and artists out there?

JM: Be unique and follow your inner creative voice. That voice may scare you a little, but it’s telling you the right direction to go in. Do whatever you have the most fun doing. If you love drawing outer space and aliens and stuff like that, do a sci-fi story. If you hate drawing the jungle and tropical stuff or whatever, than definitely don’t set your adventure in that environment. As you go along and develop, you’ll begin to learn your strengths and weaknesses as an artist, and you’ll eventually learn to play to those strengths. Challenge yourself. Try new things. Draw from life. Draw from photo reference. Draw out of your own head. Keep a sketchbook with you basically at all times and scribble in it whenever you get a free moment.

MG: Besides Grrl Scouts: Magic Socks, are there any other projects you are excited about?

JM: I did a bunch of design work for Sony on the new Spider-Man animated feature that they’re putting out next year. I can’t talk much about it or show any of the work yet, but it was fun as hell to do! I think the movie is gonna be awesome.

If this new Grrl Scouts series does well I wanna jump right into doing the next series. I’m having a blast with this stuff and hopefully it shows in the work. People can get day to day updates on my art and projects on Instagram @jimmahfood or on my site jimmahfood.com.